This week Disneyland Paris are holding a special event for selected websites and blogs entitled ‘What’s new, What’s next’ in which they tell the community which direction the resort is taking in the coming years. Without sounding like it’s being exaggerated, lots of news came out of this today, and so it feels necessary to write a recap.

Hotel Refurbishment
As we know, Disneyland Paris is currently in the middle of a hotel refurbishment cycle that has currently seen the Hotel Santa Fe and Sequoia Lodge refurbished and slightly rethemed. This retheming will be applied to all hotels in Disneyland Paris in this order: Disney’s Newport Bay Club, Disney’s Hotel New York, Disney’s Hotel Cheyenne and Disneyland Hotel. (Designing Disney & Magic Forum). This portion of the day was presented by Djuan Rivers (Vice President Hotels and Business Solutions), who was part of Euro Disney’s Opening Team and Sylvie Massara (Art Director Resorts, Walt Disney Imagineering Creative Development). Disneyland Paris were proud to announce that all hotels will soon have a free Wifi access service following a survey on guests and what they find important in a hotel (Sequoia Lodge will receive this before Christmas). Whilst nothing new has been added to the Davy Crockett Ranch cabins, guest satisfaction has improved by 10% following the refurbishment, this is a statistic repeated in other areas of hotel refurbishment. (Magic Forum)

When designing the rooms of the refurbished Sequoia Lodge, the theme that was designed upon was ‘Art and Craft’ something that is evident from the very stylish rooms, new this year was the Golden Forest Club, a premium service for those wanting a higher level of experience from their stay in the hotel.
The Hotel Santa Fe was seen as the perfect opportunity to utilise Disney Pixar’s Cars franchise in the unique Route 66 environment, the hotel colours have been given a slightly softer touch (inspired by rocks from the film) with strips on top of the buildings for Cast Member safety, but have been themed to include Cars characters.

The next refurbishment program to be undertaken in the hotels is the most ambitious yet, everything will be given a makeover in the Newport Bay Club. (Parking, rooms, lobby and even the facade which will be stripped and then replaced). The rooms will be fitted with incredible technology which will detect things such as open doors in order to regulate the room temperature. The order of repair will be the Eastern wing first, in which the pool area will be spruced up, followed by the central area and the lobby, with the west side and convention centre coming third. Rooms will be given classy Disney touches such as a Mickey Mouse image and warmer colours.

Djuan mentioned that the aim is for guests to receive the same experience as they currently do when they visit a Disney Park in the United States, which can only be a great thing for our resort hotels. The investment Disneyland Paris has put into their hotels has been ‘huge’. Other, minor, hotel news includes the Cheyenne Water Tower (which InsideDLParis recently reported has been removed) will be replaced as the old one was falling apart. 3 star Disney Hotels will no longer have shower curtains and will be fitted with glass screens.

Park News
Another part of the event was a lunch with Joe Schott, who is Disneyland Paris’s Chief Operating Officer who gave some interesting information over an informal lunch.
Main Street USA will shortly be entering an extensive refurbishment period. These refurbs will not at all be superficial, but will see things replaced with durable materials, this includes a total rip out of Town Square Photography Store which will then be made into a brand new store. This begins very soon with scaffolding being erected on Main Street USA ‘in the coming weeks’.
Indiana Jones et le temple du Péril will be levelled soon and rebuilt from real stone, the looped section of track will also be replaced. It was noted by Magic Forum, that Joe Schott was passionate about improving the quality of the parks and admitted that sometimes in the past things may not have been done right, but the park not be in the same condition as it is now in 4-5 years.
You may have heard that the Stunt Show has seen some minor modifications recently, this is not permanent and will soon be back to normal.    Joe was very clear that the Mark Twain will never be scrapped as he sees it as an icon of the park, he added that in his opinion, the Mark Twain should have been refurbished before the Molly Brown. Magic Forum asked about the Geysers, to which the response was that they are not a priority and will never return in their previous form, however something unique will eventually replace them.
For those who have complained about the Space Mountain seats, these are soon to be replaced with something more comfortable. A new single riders line is being looked at once a year, the first will be Crush Coaster, which will also see a new entrance. Soon, the High School Musical theme in Disney’s Blockbuster Cafe will also be replaced. New safety systems are to be installed in native rides (such as Big Thunder Mountain) which will make a restart easier after it has gone down. Armageddon was mentioned as a ride he did not like, but it’s not a priority to replace now, emphasis is on new rides and additional capacity, nonetheless it will eventually be replaced. Star Wars and Marvel were mentioned, and that if they are to be done, it can’t be a ‘patched job’.

Halloween and Christmas
This presentation to the websites and bloggers was given by Christophe Leclerq and Emmanuel Lenormand. The first thing that was mentioned is that Halloween will grow during the next few years. Decorations will go up in Main Street Station and Town Square, expect lots of orange banners! Returning features are Goofy’s Candy Machine and the Villains Meet and Greet (which will see a whole group of villains, and a band!). Duffy will debut a Halloween outfit, lamp posts will feature Mickey Pumpkin heads with fall leaves around it giving a classy look. Minnie’s Couture has arrived where Winnie the Pooh usually meets, this is a meet and greet location. The Halloween Cavalcade will expand as time goes on, this year the Pumpkin men return and Donald, Daisy, the nephews and Uncle Scrooge will all appear on one float, there will also be a parade unit with Winnie the Pooh and some ‘pumpkin girls’. The final float will feature Mickey, Clarice, Chip and Dale in what promises to be ‘country fun’. The sound for the parade is called ‘Vive la Vie’ and will be sung entirely in English. The old villains float will not be used, as it doesn’t fit the new parade look. Unfortunately, these cavalcade floats are stripped down Fantillusion floats.
This year the Nightmare before Christmas photo location will feature the fountain from the film, and during the Christmas season, Jack will be wearing his Sandy Claus costume.

This year, Christmas runs from 10th November until the 6th January, the decorations on Main Street Station will be returning, but with a brand new logo. The new Christmas tree will finally arrive and will feature more decorations and special lighting effects. This tree will be lit up nightly in the new Christmas tree lighting ceremony named ‘Les Voeux Magiques de Noel’, this will not feature any characters, and will feature the voices of Pinocchio and Jimmy Cricket, it will be in English, French and Spanish, new music has been written for the show and will be a 360 degree experience so that everyone can profit from the show, no matter where they are stood. The Christmas Cavalcade continues to grow, the opening float will be the Snow White float from the Wonderful World of Disney Parade, and the Toy Soldiers are back, but with Goofy as the band leader. The Gingerbread men make their Disneyland Paris debut, then Santa Claus float and the Toy Story float, featuring even more Toy Story toys.  Disney Magic on Parade will also feature Santa Claus as it’s opening.
Moving onto Disney Dreams of Christmas, Olaf will serve as the main character of the show, and will act as a sort of shadow figure. There will be nothing new in the Walt Disney Studios Park, but that is for next year.

Cast Member Recruitment
The making a dreams come true, is a real job advertising campaign continues, and continues to grow and is presented in different languages. The Casting department is also creating a brand new Recruitment application which will use augmented reality.

All this fantastic information is brought to you by @Magicforum and @DesigningDisney on twitter. Please follow them if you enjoyed this information, and want to know even more about the goings on at Disneyland Paris. 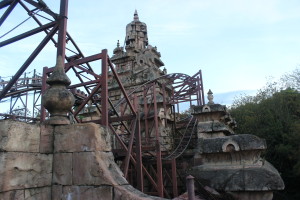 This week Disneyland Paris are holding a special event for selected websites and blogs entitled ‘What’s new, What’s next’ in which they tell the community