What can other Disney Parks tell us about the WDS expansion?

The Walt Disney Studios expansion will be unique to Paris, let's look at other Disney parks to see what we might get.

The initial wow factor still has not worn off, the Walt Disney Studios Park expansion is impressive and it will radically transform the second gate in Paris. As a fan community we have picked apart the concept art, discussed an theorised over the stages of development and generally just expressed our delight as to what is coming. But as we really dive in, we find that we can actually use other Disney Parks to give us a stronger idea as to what is coming. To do this, I’ve taken a look at upcoming expansions at almost all the Disney Parks including Walt Disney World, Disneyland Resort and Hong Kong Disneyland.

Perhaps the most surprising addition to the Walt Disney Studios line-up is the Frozen land; however the Frozen concept is not going to be unique to Paris. In fact the large scale Hong Kong Disneyland expansion is underway and whilst the headlines have been grabbed by the new castle, the Frozen land has also been confirmed and has even been given a piece of concept art. 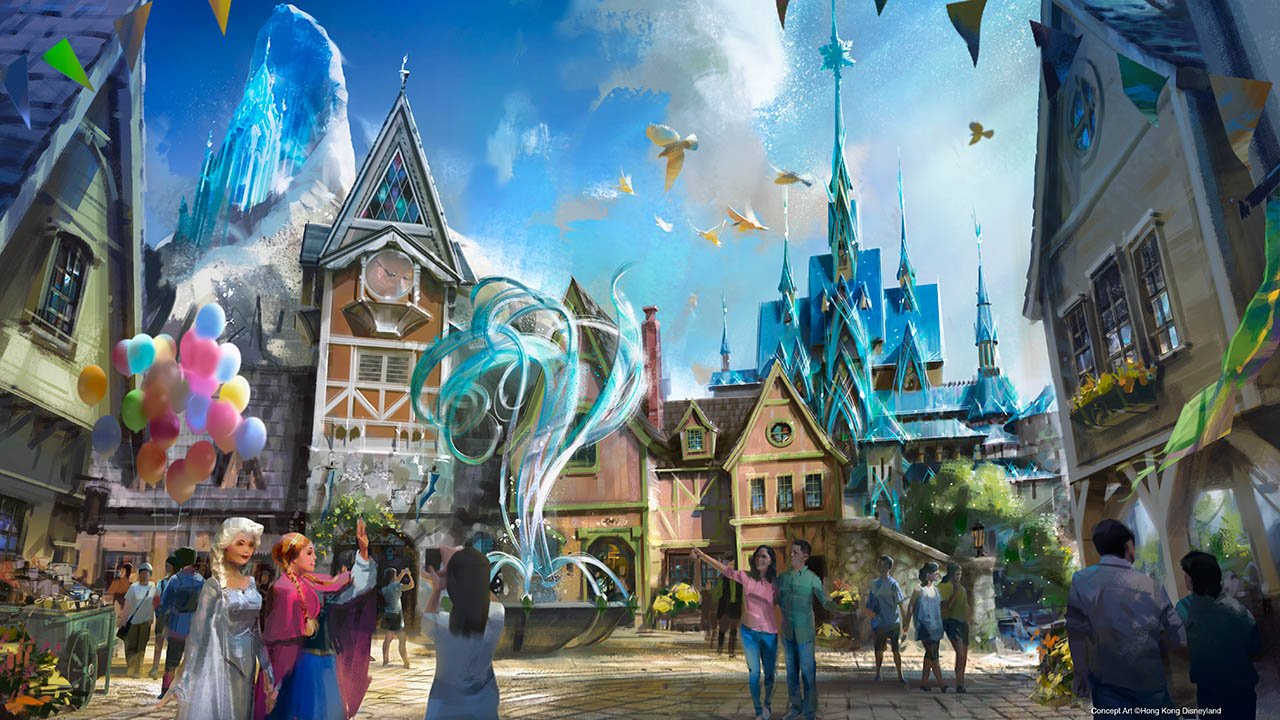 Taking a good look at this concept art, it’s clear to see that this is actually quite close to the Frozen concept on the Walt Disney Studios Park redevelopment plan with both the Arendelle Castle and Elsa’s Ice Castle. Also featured in some detail is the Arendelle village that it looks like we will be getting in Disneyland Paris. The area looks exciting and realistic and if we get a version of this then we can all be thrilled.

For a current example of what a Frozen-based attraction currently looks like then we can take a look at Frozen Ever After which is currently in Epcot at Walt Disney World. This attraction takes over the old Maelstrom attraction and whilst it is unlikely that this will be created as a carbon copy, we can visualise how Frozen works in this environment and the types of scenes we could be looking to expect. 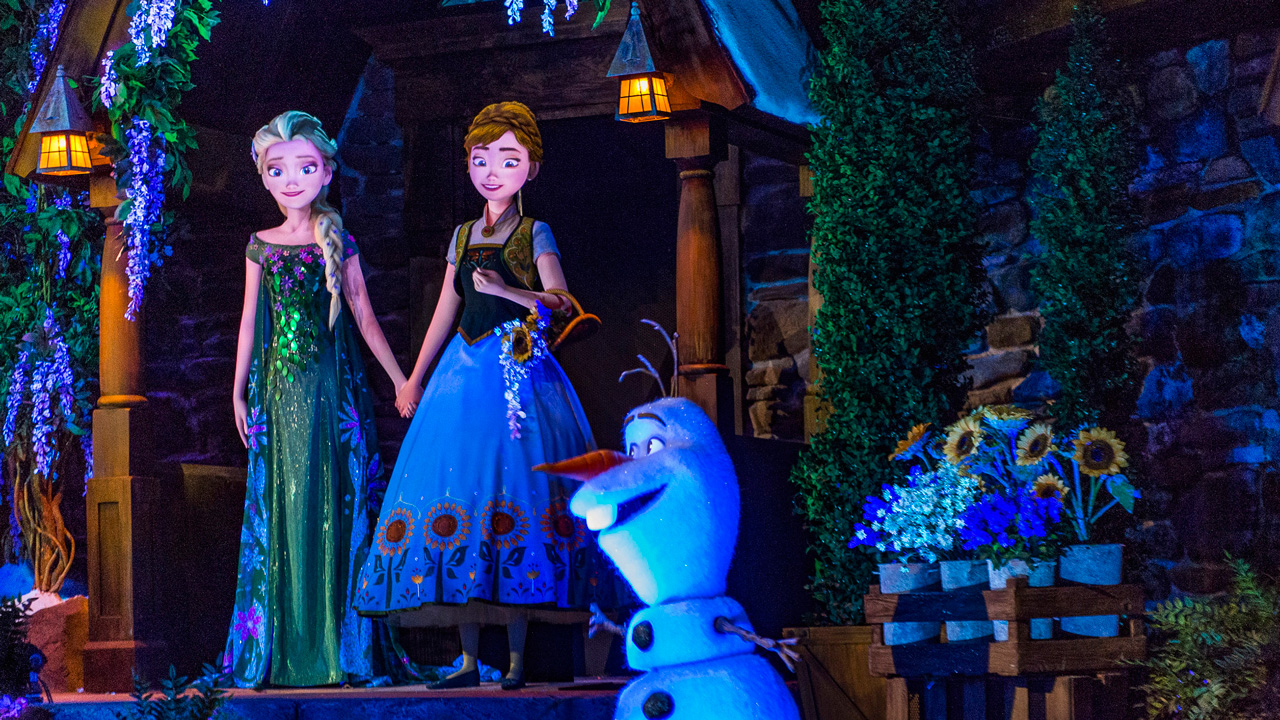 Frozen has both been a repurposed area of a park and will be a unique new area. Whilst these clues don’t provide the answer as to what is coming to Disneyland Paris, we can use them to get some clues. 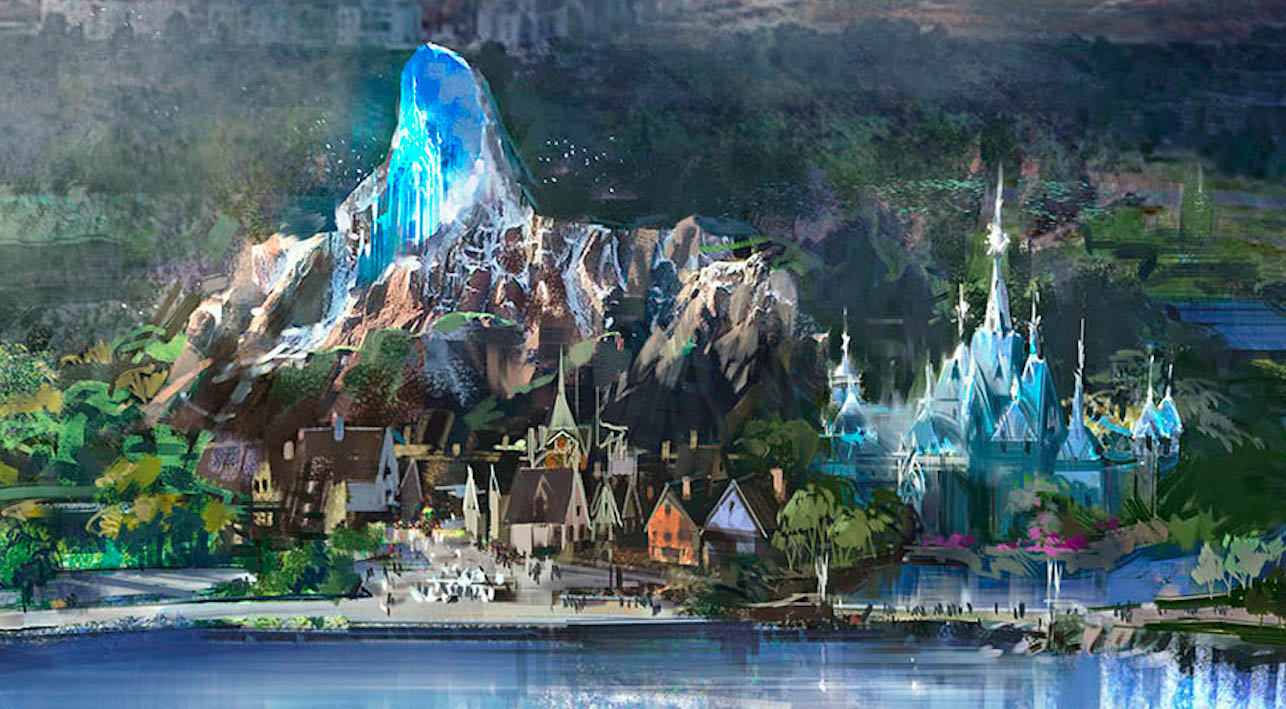 The incorporation of Marvel into Disney Parks is quite a new thing, both Disneyland Resort in Anaheim and Hong Kong Disneyland have managed to incorporate it into the parks so far with further developments announced for Hong Kong and Disneyland Paris (Hotel New York and Marvel Land). 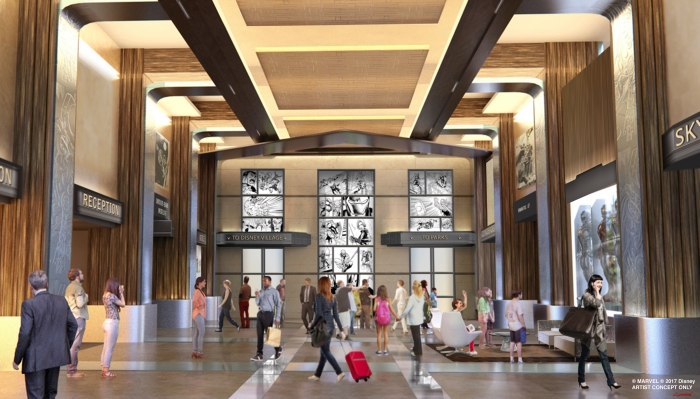 The concept of this hotel looks primarily inspired by the comic book world of Marvel and it seems increasingly likely that the expansion (and indeed the Marvel Summer of Super Heroes) will be more inspired by the Marvel Cinematic Universe. Perhaps more revealing is that the intent exists to make Disneyland Paris a destination for Marvel fans, it is unlikely that other Disney resorts will be receiving a Marvel land and hotel making Paris unique in this regard.

In California Marvel has taken over The Twilight Zone: Tower of Terror. Whilst not on the Disneyland Paris concept art for Walt Disney Studios Park (indeed, on this art the Twilight Zone theme remains). It may now be unlikely to come to the Walt Disney Studios Park, we can learn a lot from the on-ride videos as to how Disney produce Marvel attractions.

The first Marvel-based land will be opening at Hong Kong Disneyland. Currently announced is an Ant-Man attraction that will join the recently-opened Iron Man attraction (think: Star Tours but with Iron Man as the main theme). The land takes of the look of a very modern and technological type area and if we compare the Hong Kong concept art (below) to the Paris overview that we have seen, we can see the concept is rather similar. The hyper-modern look will not look too out of place in Walt Disney Studios and could potentially be a vibrant place to be (particularly at night). 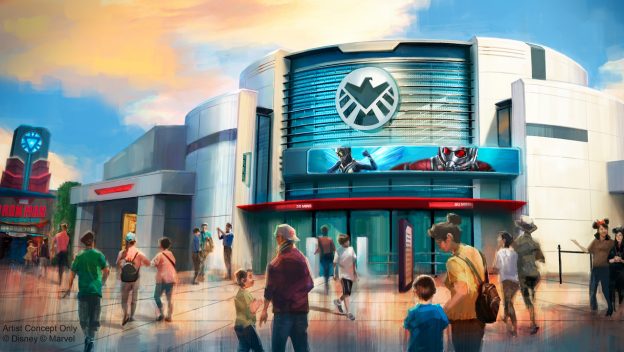 We know that in Paris, Rock ‘n’ Roller Coaster will become an Iron Man experience, but other than that it is unclear exactly what is coming in the Marvel sector. But it is likely to be quite exciting. 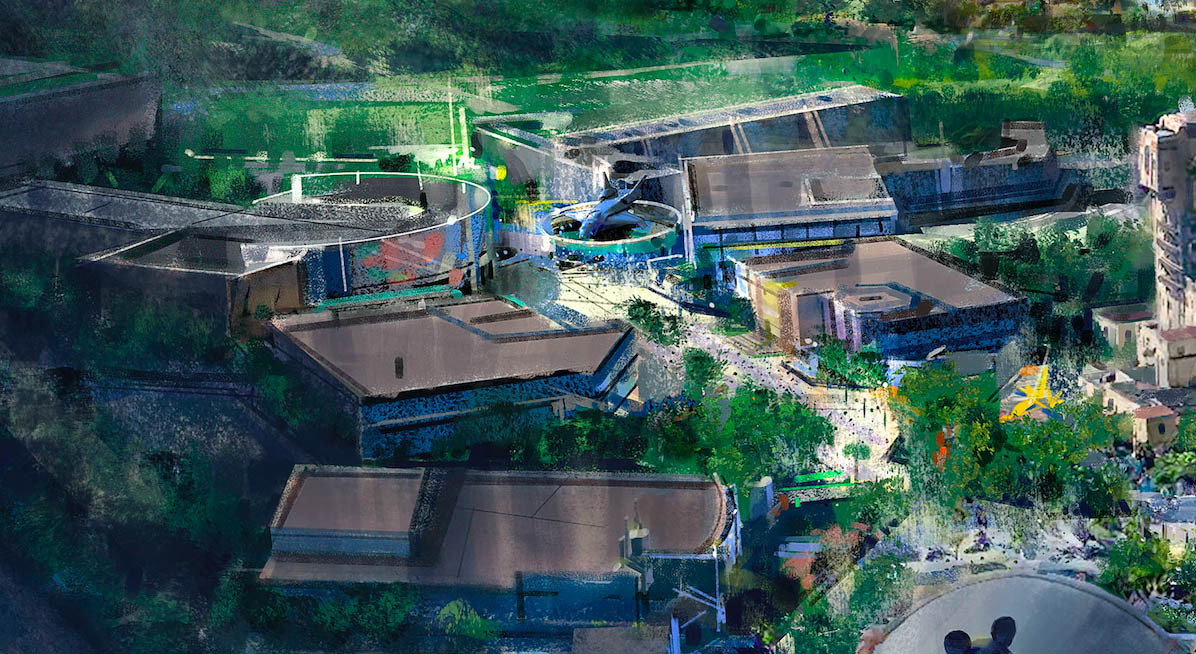 Star Wars Lands are coming to Disneyland Resort and Walt Disney World, the new experiences branded as Star Wars: Galaxy’s Edge takes place on the planet Batuu and will feature two attractions. One of these will be based upon guests flying the Millennium Falcon and the other plunges you into a showdown between the Resistance and the First Order. 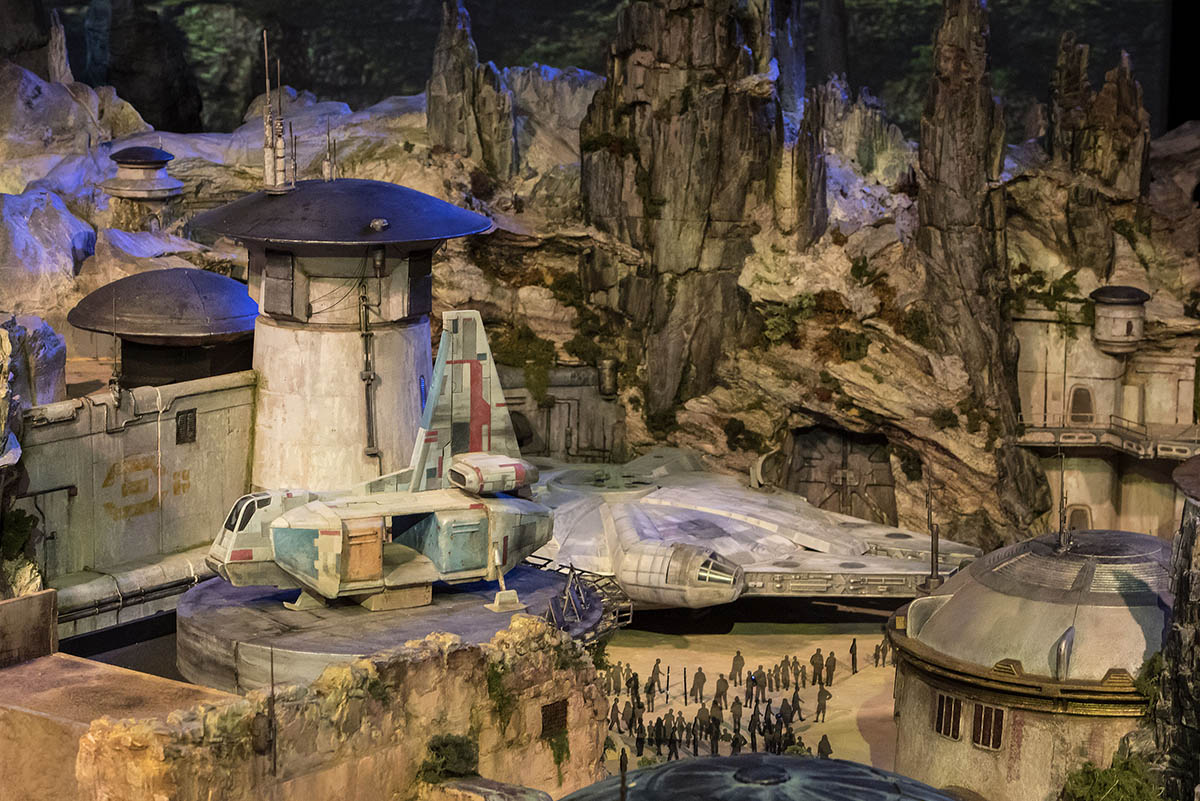 There will also be a Cantina-style experience to dine in as well as an array of shops to explore all on this planet that has been created by the talented imagineers.

Looking at the concept art for the Walt Disney Studios Park development, the Star Wars sector looks very heavily inspired by this expansion and so it is not difficult to think that we will be getting something very similar to this in Disneyland Paris (if not a carbon copy). Again, Paris fans should be watching this development very closely (although most already were as it looks to be one of Disney’s most impressive developments in years). 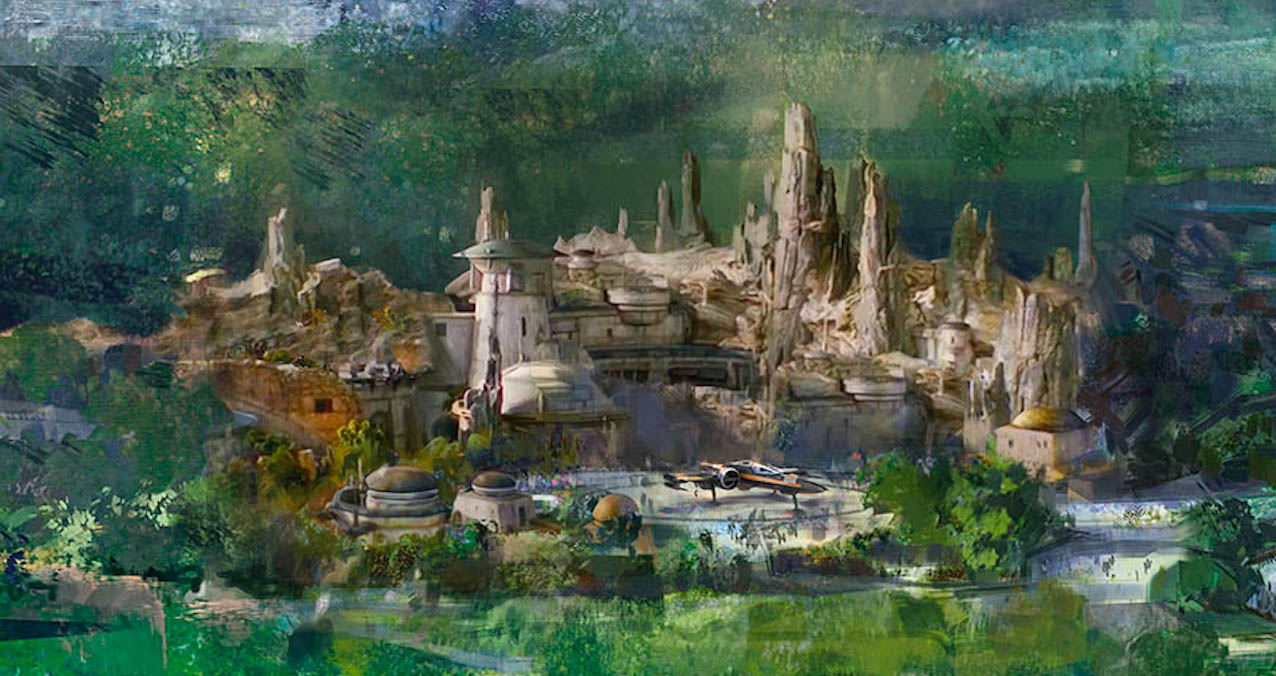 For many Disneyland Paris fans, this type of development seemed inconceivable and so perhaps we took our eyes away from the international developments. What we have learnt in the past week is that we should be constantly watching what is going on abroad as these plans all originate from the same place. The next few years are going to be a majorly exciting time for fans of Disney resorts all over the world.

Who knows what the future may hold, but it sure does seem like it’s going to be good. 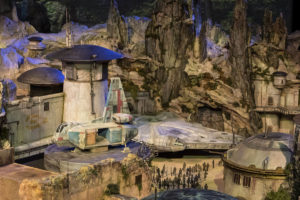 What can other Disney Parks tell us about the WDS expansion?

The Walt Disney Studios expansion will be unique to Paris, let’s look at other Disney parks to see what we might get.