What a week! Disneyland Paris have launched their newest season that brings the term ‘Flower Power’ to a whole new level as well as making huge visible advances on the Ratatouille: L’Aventure totalment toquée de Rémy. It would seem that the low season is finally over and we are in to this brand new year of excitement.

We’ve been discussing the new Spring Festival since December – We’ve been excited at what was to come, frustrated at the lack of news and everything in between. But now, it’s here and it looks good. Last week we brought you images of the toparies that decorate Main Street USA – now the station has been decorated in this new image from @insideDLParis

It’s not just the Station that has changed for the season, characters have been dressed for the occasion, the parasols have made their return from winter hibernation and bird song have made their way into the Main Street loop. Most importantly however, shows have returned to Disneyland Paris – for a long time they were the feature that Disneyland Paris lacked but now they are back and they have fitted back where they belong. First, Welcome to Spring. This show takes place Saturday – Wednesday in Town Square. The show sees performers sing along and dance to various songs from the era in which Main Street is set. This show adds a lot of atmosphere and just works perfectly. See how the performers interact with guests in this video from DLP Welcome:

This is the type of show we should be seeing in Disneyland Paris every day no matter what season – it just helps set the scene somewhat. Moving on to the Spring Promenade taking place on Central Plaza and the Royal Castle Stage – this show is rather unique in the way that it takes place in two distinct places and yet manages to other two different experiences to the same show. Now, the music to this show was always on to something great when they borrowed from Mary Poppins and the Tokyo Disney Spring Fever carnival. But not in my wildest dreams did I imagine that the show would be this good – yes it’s simple, but it’s brilliant in its simplicity. Again, check out these videos from DLP Welcome of the two experiences:

The real success story here is how joyful the show is mixed in with the music. That Let’s Go Fly a Kite section looks magnificent. The park’s programme has also got a Spring spruce up with all the new events naturally listed. 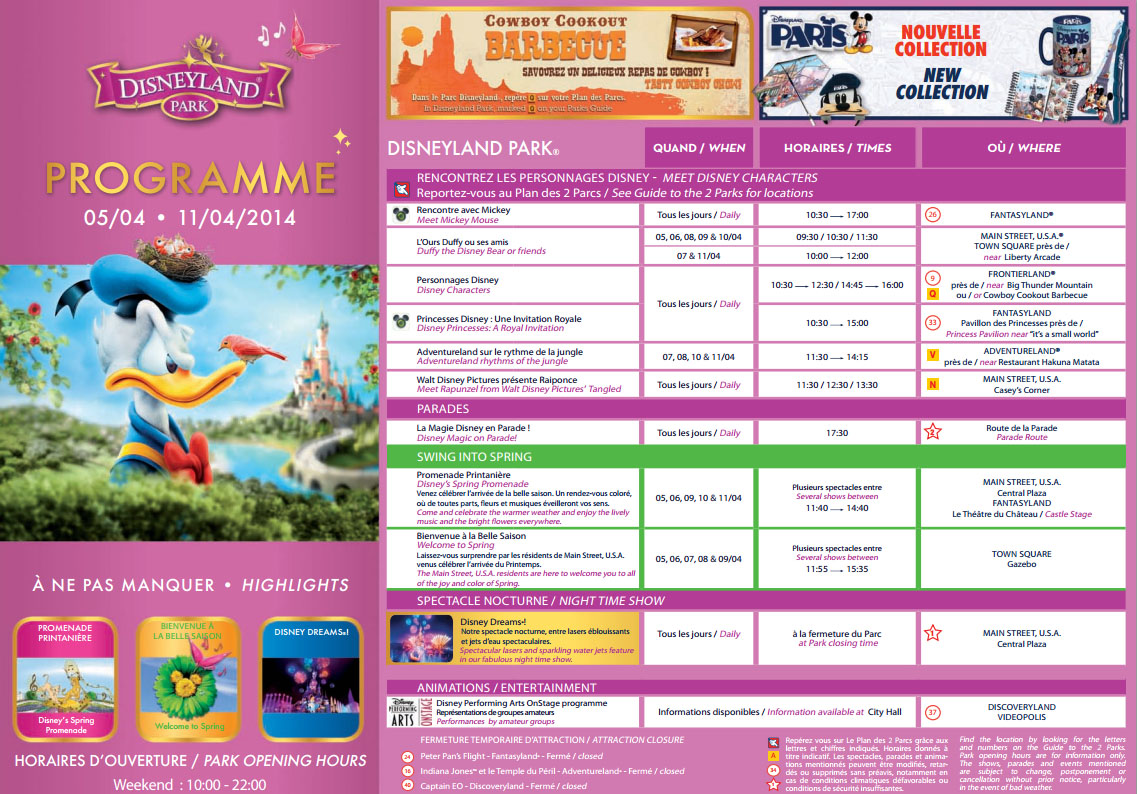 I’m going to Disneyland Paris next weekend, so make sure you follow me on Twitter and check back here when I get back where I’ll break down piece by piece my thoughts on Swing into Spring.

I’m impressed by this sign. The lighting that is evident from this photo should allow for beautiful night shots of this area – now all we need is the Walt Disney Studios Park to be open at night! Today (Sunday 6th April), reliable news source @insideDLParis posted photos of this sign which has been completed with a ladle.

And the addition of a big spoon on the ride’s entrance sign pic.twitter.com/o0JuUXZxEF — InsideDLParis (@InsideDLParis) April 6, 2014

Finally, Disney’s Fastpass ticket distribution area has been created with a rather classy looking font.

The arrival of the Fastpass signs, English signs infact in this French themed area pic.twitter.com/WJ4zgq1waa

This area is shaping  up to look fantastic – It’ll be interesting to see what happens next. – An opening date perhaps?

Disneyland Paris fans were in for a treat this week as the guys from Disneygraphy released their new magazine. This time round explore Walt’s,  Sir. Mickeys Boutique and the creation of the Nautilus.

That’s it for this week – I’m off to grab a drink and read the Disneygraphy Magazine. – There’s a few articles to come from me this week – Enjoy!

What a week! Disneyland Paris have launched their newest season that brings the term ‘Flower Power’ to a whole new level as well as making