During the What’s New, What’s Next event in September 2013, one of the big headlines was that there was to be a total refurbishment of Main Street USA. We were told that scaffolding would ‘go up in weeks’. Well, quite a lot of weeks later and it has happened. Also this week we have seen advancements on the Ratatouille attraction as well as damage in the Nautilus. Let’s get started.

As previously mentioned, this refurbishment has been a long time coming – but it has finally begun in earnest. Scaffolding has gone up over part of the Main Street Transportation building. No news on how long it’ll be up for, or even if more will be going up any time soon to cover the rest of the building.

Throughout this year serveral buildings on Town Square will get refurbished. pic.twitter.com/59G9E7Oq8W

Regrettably this white covering looks rather cheap and nasty – let’s hope it is either not up for too long, or gets themed. Also due to be part of this refurb is Main Street Station, not sure when this will happen yet but as the station currently has a Spring Decoration and will have Halloween and Christmas decorations, I’d bet on summer.

Progress, or De-progess around the resort!

Most Disneyland Paris fans will have heard of, or will follow @insidedlparis – It’s a twitter/facebook account I cannot recommend enough, they constantly keep us to do date with the goings on around Disneyland Paris. This week has actually been rather busy.

Let’s begin in Fantasia Gardens where the resurfacing work outside the Park exit gates has concluded leaving a pavement that looks as good as new! Works have now moved slightly further down, this is part of a wider scheme of refurbishment of the entire Fantasia gardens paving.

Works continue on installing safety barriers on top of the Adventureland entrance 1/2 pic.twitter.com/JfbqqsxQ3N

Safety first it would seem as after the set of stairs leading up the castle (on the left hand side when looking at it straight on from Central Plaza), we now have the Adventureland Bazaar getting safety railings. They look unobtrusive, so I’m fine with them.

Why do Guests have to destroy everything? pic.twitter.com/3YsBouHffG — InsideDLParis (@InsideDLParis) April 25, 2014

Whether an accident or not, I hope this gets fixed pretty quickly. Just a little respect please. These displays really do add to the Disney experience. I’m willing to believe this was an accident though – I don’t think guests break things on purpose.

Big progress on the fountain in La Place de Rémy this week. Themeing has started to extend over the metal framing for the fountain. And well, it looks pretty incredible. I cannot wait to see this area completed, it’s going to look stunning.

Update of the fountain on La Place de Rémy pic.twitter.com/YJ1Sije89U

Advertising for the new addition has also ramped up, not so much outside the resort but inside Disneyland Paris itself there is an increased amount of evidence that this ride is opening very soon. Firstly, take the former Toy Story Playland advertisement (that was still advertising it as new last week), and see this beautiful new piece with a very familiar visual.

Take a good look at the right hand side – I adore that art deco styling on a Parisian style advertising board. If Disneyland Paris want to sell me art deco merchandise, I’ll be leaving my next trip was a rather unhealthy bank account.

Secondly, you’ve just enjoyed a good day at the park and you’re heading back to the parking area. When is your next trip? Well now, a big advertisement is suggesting that perhaps July could be a good time as you’d be able to discover a new attraction:

A great idea! And a new lovely visual!

So, it’s that time again. May is just around the corner and that can only mean one thing – A new pin poster of course! A full article is to come on this, but here is the new month’s releases. 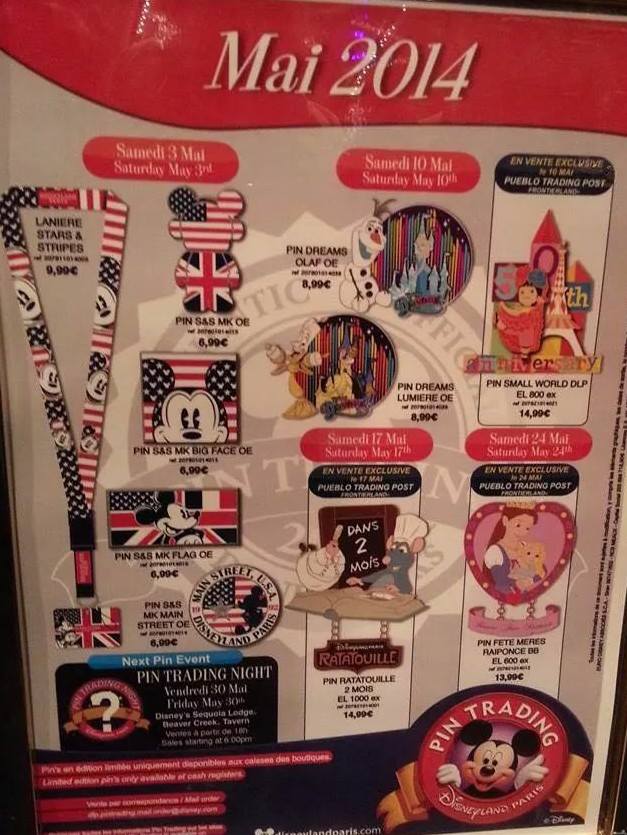 Meanwhile – why not take a read of Dedicated to DLP’s opinion on these pins!

If anyone is able to buy me the Ratatouille pin, please get in touch and we can sort out payment – Thank you, I just love that pin!

A reasonably quiet week across the community, but here are a very links to satisfy your various Disney needs:

Dedicated to DLP: The 4 seasons of Disneyland Paris – Is it the right thing to do?

Have a nice weekend!

During the What’s New, What’s Next event in September 2013, one of the big headlines was that there was to be a total refurbishment of Main