In attempting to tell the story of the history of Disneyland Paris and identifying key moments in the history of the European resort, it is necessary to go further back in time than the short twenty-five years that the Parisian park has been in existence. It’s necessary to go further back in time, and to cross a vast ocean and even then cross the American continent. I seek here to go back as far as the mid-twentieth-century and to Walt Disney’s Disneyland which recently celebrated its sixtieth anniversary. Without the fantastic success of this initial park, and the dream of one man, the Disney empire wouldn’t be in existence today. But the story of Walt Disney, France and Disneyland Paris crosses multiple borders. It is said that the Statue of Liberty was a gift from France to the United States and eventually, this became true; however the initial idea for the sculpture was born in a much darker time. Just over fifty years after the French Revolution brought the fall of the absolute monarchy in France, Napoleon III came to power and imposed upon France the Second Empire from 1852. Gone was the revolutionary ideals of democracy and Liberté, Égalité, Fraternité, in came a totalitarian regime designed to suppress certain freedoms. It is important to note here that not all freedoms were removed, it was a more controlled freedom. Paris became littered with sculptures and monuments designed to bring forward the idea of pride in the state. The assassination of Abraham Lincoln wasn’t as widely condemned from France; at this moment, however, a group of revolutionaries were plotting a symbol of friendship between France and the United States: The Statue of Liberty, which was to be designed by Auguste Bartholdi. In 1886, the statue was inaugurated. The statue looking out to sea, and to France, became a great symbol between the two nations. It is this that is celebrated in Disneyland Paris in Liberty Arcade.

The birth of the theme park is largely attributed to Walt Disney and Disneyland – one can argue that this is indeed the case, the mold of having one park segregated into many self-contained lands is that of Walt’s invention – however it is a park just seven miles north-west of Disneyland that is one of the key inspirations for Walt Disney. Knott’s Berry Farm in Buena Park features a ghost-town area, this is in existence now as it was when Disney visited. Prior to this, this idea of an amusement park was rather sleezy; the original amusement park was what we today give the title of ‘fairground’, these simple rides mixed with fairground games. These were given a rather negative image. In discussing the concept of Disneyland with his wife, Lillian Disney told Walt that amusement arcades brought in negative clientele. Walt wanted to change the image of the industry, craft it in his own unique way – it was to become an extension of a film. Disneyland is one of the great productions, it is the film that is in constant production. For Disney, the cinematic medium can be completed, handed over and forgotten. The theme park can never be finished, this concept intrigued Walt. The rather well-known story is that Disneyland was a concept that was considered on a park bench when watching his children play. Children’s playgrounds are a rather one-generational affair – the children play and the adults watch the children play; the pleasure for the child is immense, the pleasure for the adult is the spectacle of watching his or her child having fun – Disney envisaged a park that crossed generations, a place for all to enjoy. It could quite easily to said that Disneyland was a park born of Walt’s frustration with the status-quo, he sought to enjoy with his children as opposed to instead of them for Walt was a child at heart.  As a child, Walt visited the Electric park in Kansas City which was modeled after the 1893 World’s Columbian Exposition in Chicago, the park contained wonderful architecture with popcorn lighting, it was a park that was beautifully designed and crucially in the formation of the Disney park, contained a railroad and an evening firework show.

Walt researched heavily in the theme park industry before committing to actually realising his dream, he visited the Tivoli Gardens in Denmark. The park was the perfect model for Disneyland in many ways, and addressed Lillian Disney’s concerns over the amusement park concept as discussed in San Gennaway’s The Disneyland Story:

Walt told him [Art Linkletter – a good friend of Walt] how impressed with how clean the park was, how orderly the layout was, and how there were plenty of places to sit and relax. Tivoli Gardens did not sell alcohol and there was no raucous entertainment. At night everything was well. It was just a nice place to be. Walt learned, “Anything that I build will be kept clean, and the employees should feel that they are part of the show.” When he saw the Tivoli Gardens, he turned to Lillian and said, “Now, this is what an amusement park should be.’

The Disney studio possessed a tiny corner across the street from the offices. He tasked his designers to fill this little ten-acre plot of land. They happily did this, there were to be merry-go-rounds and a Bavarian village would greet guests at the entrance. It was obvious that this plot of land was too small. The Second World War hit and the Disney’s studio profits were hit as well, the park was sidelined, it simply was not affordable. Disney was a determined man, once he had an idea he was going to make it a reality, he would find a way.

But financial woes hit the Disney studios, the war was undoubtedly bad for business. In 1946, Disney took a $1 million loan from RKO in order to escape insolvency – the studio continued to make films, and some of their finest films such as Cinderella. The theme park idea remained very close to his heart, the war took its toll on the American people, it was time for Disney to provide people with escapism; that is what Disneyland was and still is, surrounding the park is an impenetrable barrier which keeps the world’s troubles out and allows Walt’s dream of ‘Daddy’s day’ to flourish. Disneyland is timeless, is seeks to be a place of happiness and optimism:

To all who come to this happy place: Welcome. Disneyland is your land. Here age relives fond memories of the past, and here youth may savor the challenge and promise of the future. Disneyland is dedicated to the ideals, the dreams, and the hard facts that have created America, with the hope that it will be a source of joy and inspiration to all the world.

A reminder of the American dream is exactly what America needed, and Walt was desperate to finance it. The canny business man hatched an idea, his films and television series were near-guaranteed hits, and so Walt financed his dream in a rather atypical sort of way. He pitched a television show to the big television networks.

The two biggest networks NBC and CBS passed on the opportunity. Walt turned his sights to ABC [Now a part of the Walt Disney Company it is useful to here mention]. ABC was in a ratings struggle, it needed Walt and much as Walt needed it. Walt would produce a series entitled Disneyland in which he would give previews of his project, it was essentially an advertisement for the resort. Walt could build his dream. But the next question would be: where? As already established, the studio ten-acre plot was far too small for what Walt had in mind. It was rather evident that Southern California was the place to be, but again the question was where? Walt enlisted the help of Stanford University who suggested that the future growth would be in Anaheim, and the rest is history. Walt found his space and began to build. This Disneyland that is ‘dedicated to the ideals, dreams and the hard facts that have created America’ is heavily rooted in Europe. The original ten-acre site was to be modeled on a Bavarian village and the centre-point of Disneyland was to be Sleeping Beauty Castle. Disney loved the European fairy tales, and modeled his centre-piece on Neuschwanstein Castle in Bavaria. Disneyland Paris takes its inspiration from French, British, German and Italian architectures throughout its resort. Europe is omnipresent and so the European park could be seen as an inevitability in the future. Walt worked tirelessly during the construction, he was on hand each and every day in Anaheim right up until the opening. The park was Walt’s hobby, his passion, his legacy.

Disneyland opened on July 17th 1955, sixty-years later it is still in existence, as popular as ever and is still widely seen as the birth of the theme park [Whether it deserves to be or not]. The park was rich in American iconography, it was designed to be a bite-sized symbol of American history and vision to the American future, a manifesto of American greatness. But at the heart of it was the empirical past of the old continent. Disney did not seek to promote negative feelings to what America had broken away from, instead he glorified it, turned it into the romantic heart of the park. The American town of Main Street is pure commercialism, the American Frontier is American entrepreneurial spirit, but Europe is something more. Walt embraced the world, he was a citizen of something much bigger than the United States, he sought to unite not divide. In this sense, his crowing glory is perhaps not the park itself, but “it’s a small world”.

Disney grew frustrated in Anaheim, there was very little room to expand and the success of Disneyland created the birth of Anaheim as a major touristic town. A Florida project was born, it was to be bigger, and much more controlled. Disney would never see his vision of “Daddy’s Day” expand, let alone go global, but the world would embrace Disney and his ideals.

The next article will dive in and investigate the birth of Walt Disney World and Tokyo Disney Land and look at how these influenced the design of Disneyland Paris. 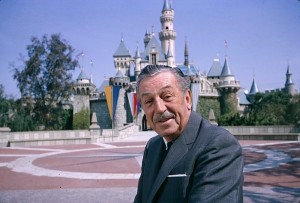