[vc_row type=”vc_default” full_width=”stretch_row” full_height=”yes” parallax=”content-moving” css=”.vc_custom_1521580351380{padding-top: 150px !important;padding-bottom: 150px !important;background: #eaeaea url(https://www.dlptownsquare.com/wp-content/uploads/2018/03/marvel-show_dlp.jpg?id=5523);background-position: center;background-repeat: no-repeat !important;background-size: cover !important;}”][vc_column width=”2/3″ css=”.vc_custom_1521580409461{background-color: rgba(221,51,51,0.29) !important;*background-color: rgb(221,51,51) !important;border-radius: 4px !important;}”][vc_custom_heading text=”Marvel joins an impressive lineup of Disneyland Paris shows” font_container=”tag:h1|font_size:60|text_align:left|color:%23ffffff” use_theme_fonts=”yes”][vc_column_text]Disneyland Paris has a strong tradition in the space of live entertainment. But after a period of calm in the number of shows, they are back in full force at Disneyland Paris; not just in number but in quality as well.[/vc_column_text][/vc_column][vc_column width=”1/3″][/vc_column][/vc_row][vc_row][vc_column][vc_column_text]It’s exciting when Disneyland Paris announce a new stage show. Of course, it is also tinged with a small amount of sadness that we have lost Cinémagique, one of those rare attractions that beautifully merged the artistic cinematic tradition with all the fun of the theme park attraction. But it’s mostly exciting. But why is this excitement so rampant with Disneyland Paris fans? The reason is simple: Disneyland Paris shows have been excellent of late.

We know that when Disneyland Paris announce the creation of a stage show, that a lot of effort will have been put into it and that the resort is truly creating something that we can all be proud of. Now that is truly exciting.

Let’s take a look back at the last few years of shows in Disneyland Paris and examine how each, unique in its own right, has provided a way to showcase the Parisian resort to the wider Disney family.[/vc_column_text][/vc_column][/vc_row][vc_row anchor=”Frozen”][vc_column][vc_column_text]

[/vc_column_text][vc_column_text]Whilst perhaps not to everybody’s taste, the Frozen Sing-along (2015) was the real start of this new wave of shows. A big budget performance that was based on one of the hot Disney properties, a show that came alongside the Frozen Summer season with a retail area and a change to the Disney Dreams! spectacular.

The show saw a transformation of the Chaparral Theatre into a Frozen spectacular (and the transformation of a theatre that was unused since 2012 prior to this show). It was the first step on a wider process of renewal in the show space of Disneyland Paris, a change that would continue into 2016.[/vc_column_text][vc_single_image image=”5541″ img_size=”full” alignment=”center”][/vc_column][/vc_row][vc_row][vc_column][vc_column_text]

[/vc_column_text][vc_column_text]Following on from the success of the Frozen Sing-Along came another reuse of the Chaparral Theatre. This time a small seasonal show; the show was an instant hit and disguised that a large part of Frontierland was closed for refurbishment.

Forest of Enchantment was the first time we saw Disneyland Paris try something very unique in this new era of storytelling, leads of traditional Disney characters were replaced by the spirits of nature (inspired by the elements). Disney was a vehicle to tell a story, rather than a story itself. The show gained praise for being a blend of traditional Disney stage show, but also exceptionally physical and creative.

[/vc_column_text][vc_column_text]The biggest show in recent Disneyland Paris history, and perhaps the one that offers us the best glimpse as to what we can expect from Marvel, is Mickey and the Magician. This singing and dancing spectacular fits the tradition of a Disney Parks stage musical but combines magic, the latest state of the art technology and a stunning and talented cast.

Mickey and the Magician is as close to theme park show perfection as it’s possible to get, each and every year Disneyland Paris manage to recast the show with talented actors who can combine dancing and singing very tough Disney songs multiple times a day. It’s easy to see why Mickey and the Magician won the IAAPA Brass Ring award for Best Theatrical Production. (IAAPA is a theme park industry body).[/vc_column_text][vc_single_image image=”5550″ img_size=”full” alignment=”center”][/vc_column][/vc_row][vc_row][vc_column][vc_column_text]

Based heavily on Tokyo Disneyland’s Big Band Beat, the Christmas big band brought some of the best-loved Christmas songs to life with a live band, Disney characters and immensely talented performers.

This was a show to be taken seriously with spaces filling up long before the shows were due to take place and a warm reception after each and every show. It has proven once and for all that stage shows are something that Disneyland Paris guests take very seriously. [/vc_column_text][vc_single_image image=”4462″ img_size=”full” alignment=”center”][/vc_column][/vc_row][vc_row][vc_column][vc_column_text]

[/vc_column_text][vc_column_text]And so we reach Marvel: Super Heroes United, if the press release is anything to believe this could very much be the most ambitious show in the 26 year history of the resort. The show will feature one of Europe’s largest LED screens, a 180 degree video experience, 80 light projections, indoor drones and all of this to be performed 5 times per day.

This show will delight Marvel fans by combining all of the Avengers characters and Marvel villains in a show that sounds like it’ll need to be seen in person to believe. In a world where park shows spread quickly on YouTube, Disneyland Paris needs to create an experience that simply cannot be had online. We can already tell that this show will be exactly that.

You will need to go to Disneyland Paris and experience this for yourself.[/vc_column_text][/vc_column][/vc_row][vc_row][vc_column][vc_column_text]If there is anything that we have learn in the last 3 years (yes, all of this really has happened in the last 3 years!), it is that Disneyland Paris is a world leader in live shows and that European guests will flock to them – we often see Forest, Magician and others fill up around an hour before.

It’s hugely exciting to see how the Marvel show comes along in the next few months. One thing is for certain, it’s likely to be on a scale that we have not yet seen before. And that is exciting.[/vc_column_text][/vc_column][/vc_row] 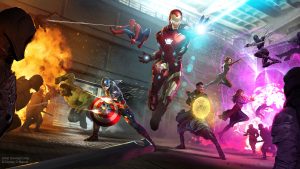