The Disneyland Paris week that was #3

We’re into the second month of the year, a week away from being able to discuss the Ratatouille opening date and a step closer to learning about Disneyland Paris’ spring offerings. However that doesn’t mean there isn’t anything to talk about. Far from it.

So far, you’ve heard this attraction being referred to as Ratatouille, or to give it its full French title L’Avenure Totalement Toquée de Rémy; from now on it looks as if it has an English marketing title. Ratatouille: The Ride will be opening this summer as spotted by the eagle-eyed Cafe Fantasia on twitter (Who you should follow if you don’t already). Here is what the community is saying:

Today (Friday), @CafeFantasia has found even more Ratatouille news for you all to enjoy.

Highlights of today’s find include that there will be 48 Vehicles in the attraction – 36 of which will be in the show.

Finally this week, it was revealed that Disneyland Paris are searching for a Linguini face character for the park.

And if you want to keep up with Ratatouille news as we go into the final phases of waiting, we have a Ratatouille project tracker right here on this website!

Slow and Steady wins the race

An expression the majority of Anglophone reads will recognise is ‘Slow and Steady wins the race’, when it comes to slow and steady Disneyland Paris are world champions. I’m talking about the Disney Village sign of course! For those of you who haven’t ‘followed’ this story, the former Disney Village arch has been in the process of being taken down for seven months now – and it’s still not finished. So, for now visitors entering Disneyland Paris are faced with an old, slightly burnt frame and a plastic welcome sign. Hardly seems fitting for the beauty that lies within does it?

On Tuesday 4th February, the Q1 2014 financial results of the Euro Disney S.C.A. were released. The results are not so good for the company with figures down across the board. The blamed is clearly laid on what Euro Disney S.C.A. have called the ‘continued economic softness’ – this is an excuse that will soon have to end. European economies are starting to grow again, and with it presumably the tourism sectors.  Onto the figures:

Theme Park revenues down 3% due to 7% drop in attendance.

Guests spent more: 4% more. Fewer guests from France, Spain, Netherlands, this was down to higher spending on admission & Merchandise

Disney Village and Hotel spending down 6% with a decrease in hotel occupancy of 9.6% (51,000 fewer nights). 6% increase in spending per room

Sponsorship Revenues down as are real estate development. No development sales occurred in Q1

Read the results on the Disneyland Paris Corporate website

A few bits of news from the community this week. Let’s begin with Dedicated to DLP who have released their 31st podcast this week featuring extensive talk on how to improve the Walt Disney Studios Park. Download it now, or on iTunes.

If you’ve spent some time on Twitter, you’ve probably come across @DLRPWonders – This week she did 20 Questions with a Disneyland Paris fan on Dedicated to DLP. Take a read.

Finally, ThatDisneyLover has summarised the months Disneyland Paris news into one handy video that is certainly worth a watch.

Chances are, you’ve eaten in a quick service restaurant and seen the character filled packaging. Well, that’s all likely to change soon as reported this week by @InsideDLParis. What do you think?

New style for Disneyland Paris Fastfood wrapping, no more Disney Characters, what are your thoughts? pic.twitter.com/RTp07PXbGa

And that’s it for this week. Next week there will be a Ratatouille opening date – probably.

Finally – Just as a note I’d like to apologise for not being too active these last three weeks. I’ve been very busy in my personal life, and really hope to carry on as normal soon. The Sponsorship article I wrote about a few weeks ago is almost ready for publication. Have a great weekend! 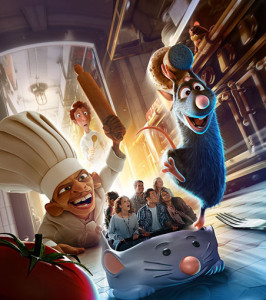 The Disneyland Paris week that was #3

We’re into the second month of the year, a week away from being able to discuss the Ratatouille opening date and a step closer to