The Disneyland Paris week that was #1

The Disneyland Paris Week that Was is a new feature that aims to consolidate all the week’s news and community articles into one post (with links heading to the various pieces of news so that you can learn more).

A big week for Disneyland Paris saw the closure of Town Square Photography, the LEGO store still not open and a Basketball draw. It seems that perhaps we may well have overlooked the talking points for this first part of the ‘low season’

This past Saturday (18th January 2014), Town Square photography closed its doors the final time in a move that won’t shock Disneyland Paris fans. This was preceded by a few events and circumstances. The first being the changing face of photography, in 1992 people used film and needed to get it developed, if you forgot your camera you’d buy a disposable camera. Now, we have phones and digital cameras. Digital Cameras essentially have made the art of producing photos nearly obsolete, and phones have almost rendered disposable cameras obsolete due to the fact for the majority of us, we always have our phone close to us and that most phones now come with cameras. Add to that the ending of the sponsorship with Kodak meaning a large supplier of goods to that shop has disappeared. Town Square Photography and Kodak were interlinked in themeing, the exterior of the shop noted the fact that it was ‘George Eastman’s Photographic Studio’, George Eastman being the founder of the Kodak Company in 1888.

So whilst the loss of an imagineering gem is regrettable, the store seems to have served its purpose. Now the shop will undergo work to create the store with a working title being ‘Flora’s Boutique’ which will sell Parisian and seasonal souvenirs. A back story seems to have been made, now all that is left is to keep an open mind and wait to see the results.

Want to read more about Town Square Photography? Check out these articles from the Disneyland Paris community.

Want to read more about Disneyland Paris and the rich history of Sponsorship? Keep an eye on this website during the weekend for a full article.

The seemingly never-ending LEGO Store saga continues this week, not with another delay, but with tentative good news. Disneyland Berry on Twitter has stated that at the moment the teams are working to get the store ready for opening in February. Let’s not hold our breath, but this store is only good news for Disneyland Paris. I, for one, am eager to see this new store and a potential start of a new direction in Disney Village. It’s time to see a bit of variety of stores, perhaps this is a perfect beginning.

Last weekend, DLRP Express tweeted that the store had a desk outside, it later emerged that this was for a distribution of a LEGO figure. Perhaps to please fans who had booked to be hoping to see the store? Or just publicity? The figure would have made a welcome addition to a LEGO collection.

What is the first thing you do when you enter a Disney theme park? You take a photo of Main Street Station or Studio 1, but then you rush to pick up your Park Guide. This week, David Goebel published an article on his Col. Joivil’s Explorers Club blog about just that. Park Maps, and more specifically their evolution, it’s fascinating to see how the design of these mass-produced souvenirs have changed over the years, reflecting not just the changing face of the parks, but of design in general. Maps ranging from the simplistic design of 1992, to the horrible geometric monstrosity of 1993-5 before moving into perhaps my favourite map which entered circulation in 1995 and lasted through to 2001.

If maps interest you, you really need to take a read of this article – and more generally of the blog.

I would not be surprised if you’ve not heard of the LNB Leaders Cup, this annual basketball competition which was first held at Disneyland Paris in 2013 is back and bigger than ever. Throughout the weekend of the 14th-16th February 2014 several French basketball teams will battle it out to be Leaders Cup champions. A full article explaining the cup and the Disney elements you could expect should you be a spectator is in the process of being written.

The competition is a knock-out affair, with the following match-ups confirmed:

The matches will be broadcast in France on the Sport+ channel if basketball is your thing. – Though if you like both Disney and Basketball, make sure to buy a ticket as you’ll experience a fantastic weekend of entertainment.

What’s in a name? – A logo apparently…

We all know Disneyland Paris has had a somewhat history of name changes. Some still stick around in human conscientiousness such as ‘Euro Disney’, but for each name change, a logo change has also appeared, sometimes a new logo won’t accompany a name change. It’s safe to say that we’ve seen a lot at Disneyland Paris, once again David Goebel has published a fantastic look through the Disneyland Paris portfolio.

A few bits of community news…

A few bits and pieces from across the community this week:

MagicalDLP have launched their new sleek-looking website, it looks fantastic and there are already a few interesting little interviews of there. Make sure you check it out this weekend: www.magicaldlp.co.uk

ThatDisneyLover was interviewed by DLRPFans. For those of you who do not know Laura, she is a Disney vlogger (Video Blogger) on YouTube publishing a wide range of videos from Disneyland and about general Disney things. Her channel is well worth a look: http://www.youtube.com/user/ThatDisneyLover

The DLParisians released a podcast last week that has been featured on our ‘Best of the Web’ sidebar, essentially it’s a trip report littered with interesting experiences. It’s only 30 minutes long, so it really won’t take up too much of your day.

Friend of the site DLRP Roundup launched a new feature on his website, a parade database. The first parade is up and features enjoyable photography – and vines!

And finally, as the yearly Disneyland Paris AGM gets closer and closer, it is time to begin preparing for the meeting. Shareholders now have the chance to read a mammoth 200 page document detailing Disneyland Paris’ performance throughout the previous year. The document is available to everyone and gives an interesting insight into where Euro Disney SCA currently stands.

That’s it for this first weekly news recap – Have you enjoyed this way of reviewing the week’s news? Tell us by commenting below! 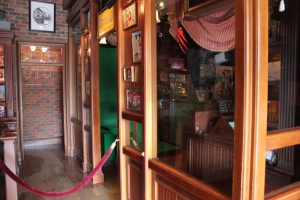 The Disneyland Paris week that was #1