Star Tours has reopened at Disneyland Paris as Star Tours: L’aventure continue. With it, a new experience of over 70 different combinations of ride meaning that there are so many reasons to do this favourite over and over again.

This new attraction takes the Star Tours experience that you know and love and expands upon it allowing for a more immersive tour across the galaxy. Whilst Disneyland Paris is the last to this arrive to this party, it certainly makes up for it in style as a Star Wars mini-land has seemingly opened up with a Darth Vader meet and greet location; a new look Star Traders and the newly opened Hyperspace Mountain experience. All these experiences, along with Season of the Force prove that Disneyland Paris is focused on being the Star Wars hub of Europe.

A slice of a Galaxy far, far away in Marne-la-Vallée

The whole rear of Discoveryland has been reimagined to create a veritable Star Wars vibe to it, this also serves a double meaning as for guests familiar with Star Tours at Disneyland Paris, it also indicates that this experience is different to what has come before. 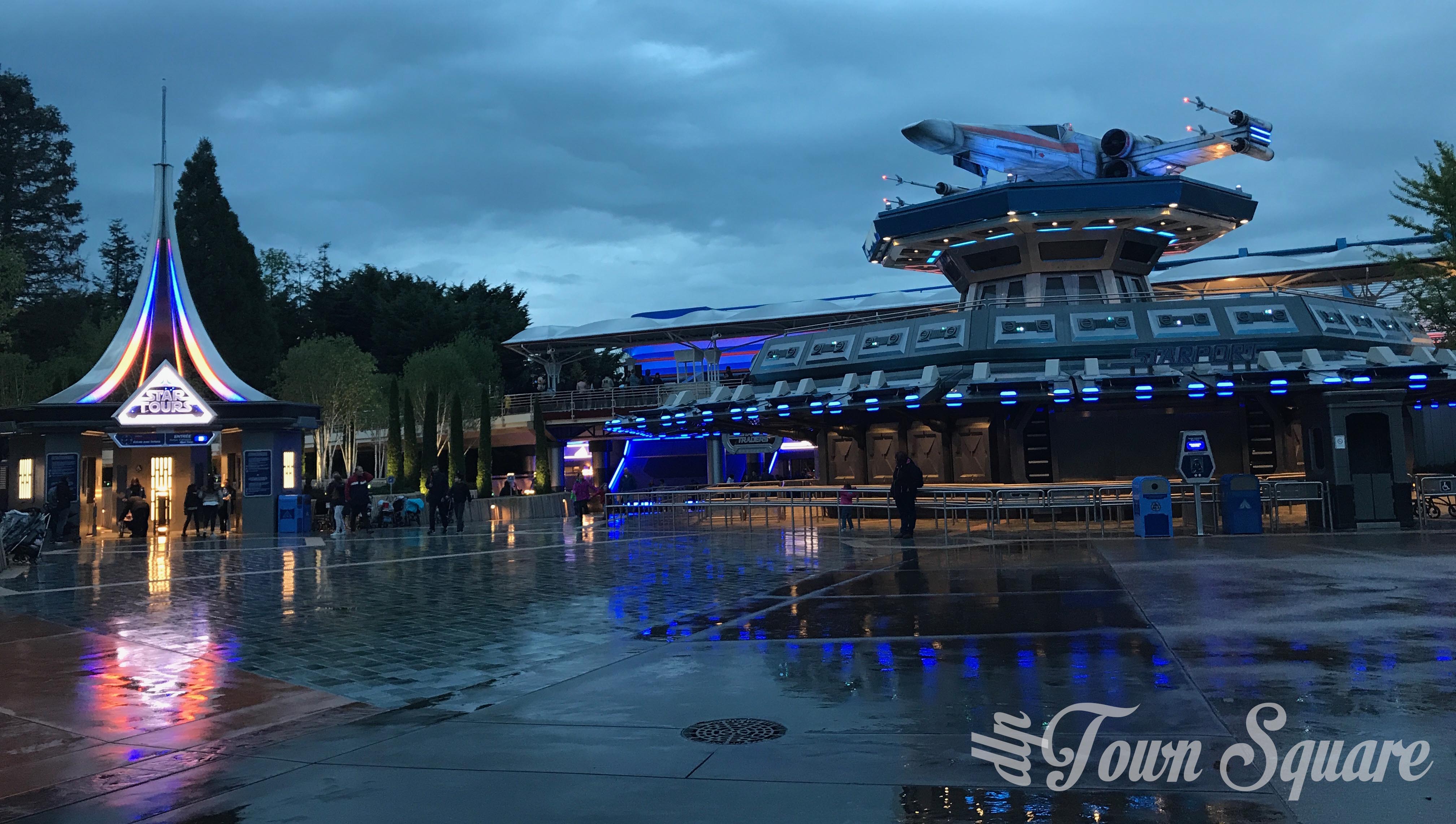 The most striking element of the new land, aside from its openness, is that the X-Wing has moved from its plinth next to the entrance of the attraction to the top of the old Star Traders boutique (now Starport) . Certainly, this provides better visibility for the X-Wing as a ‘weenie’ and should draw more people into the area (as it it were needed) however when in the area the X-Wing is barely visible and impossible to take photos of. The previously active X-Wing is taken into a more dormant look providing an impressive approach but for no pay-off in the slightest.

It is at night where this area is most alive, the beautiful blue colours are exceptional vibrant and really does bring this outer-galaxy idea to life. It is an absolute joy to spend time in the area as it is but it can’t help but feeling like a few bits of Star Wars streetmosphere (such as the Stormtrooper patrol currently in the Walt Disney Studios park) would really help this area become much more believable as part of the Star Wars galaxy.

The old starport aesthetic has been maintained and improved upon during the year long refurbishment. The colour is much more polished now and the darker look compliments the reworked land colouring. The new LED screens are crystal clear, the darker interior really helps bring out the colouring of these screens and thus the advertised planets. The advertisements for the destinations offered by Star Tours and the information videos on the Starspeeder 1000 are in plentiful supply and will allow for no repetition even on a slower moving queue. 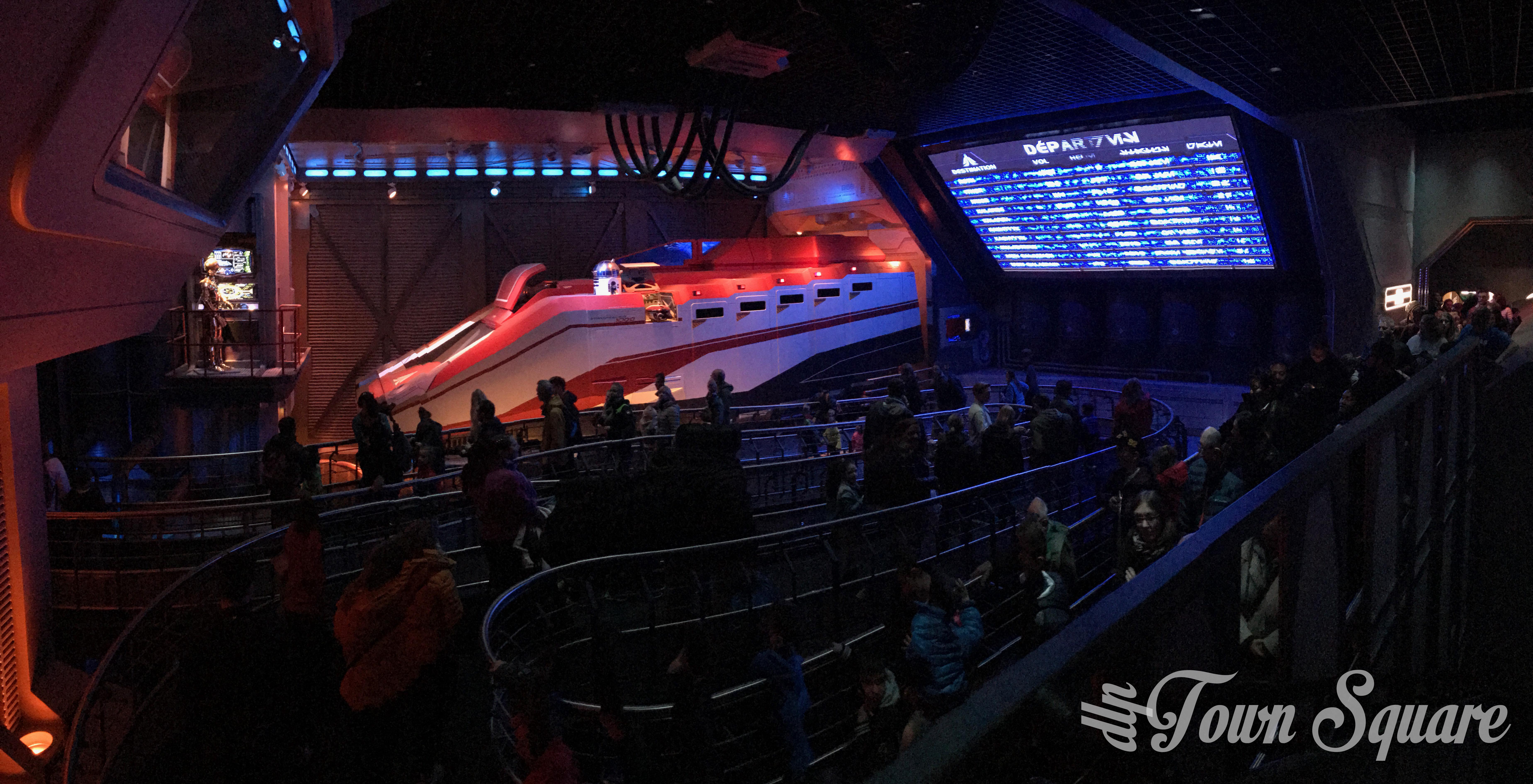 The downside to the early part of the queue is C-3PO and his over-the-top safety railings. This ruins a perfect photo opportunity of the droid that is so famous from his appearances in all the films of the Star Wars franchise that people are very eager to take a photo of (or with) him. It hardly seems appropriate to have so many safety fencings around an animatronic.

The final room in the queue is a delight. From seeing RX-24 sadly boxed up, but still saying phrases from the classic Star Tours attraction, something that will bring delight to all Disneyland Paris fans, to the luggage control droid who checks each piece of baggage and talks to guests. The luggage control itself is ingenious, it is the perfect place to sneak in Star Wars and Disney references that delight fans. Only here is it possible to see Mickey’s Fantasia hat in the Star Wars universe or Buzz Lightyear’s wings. 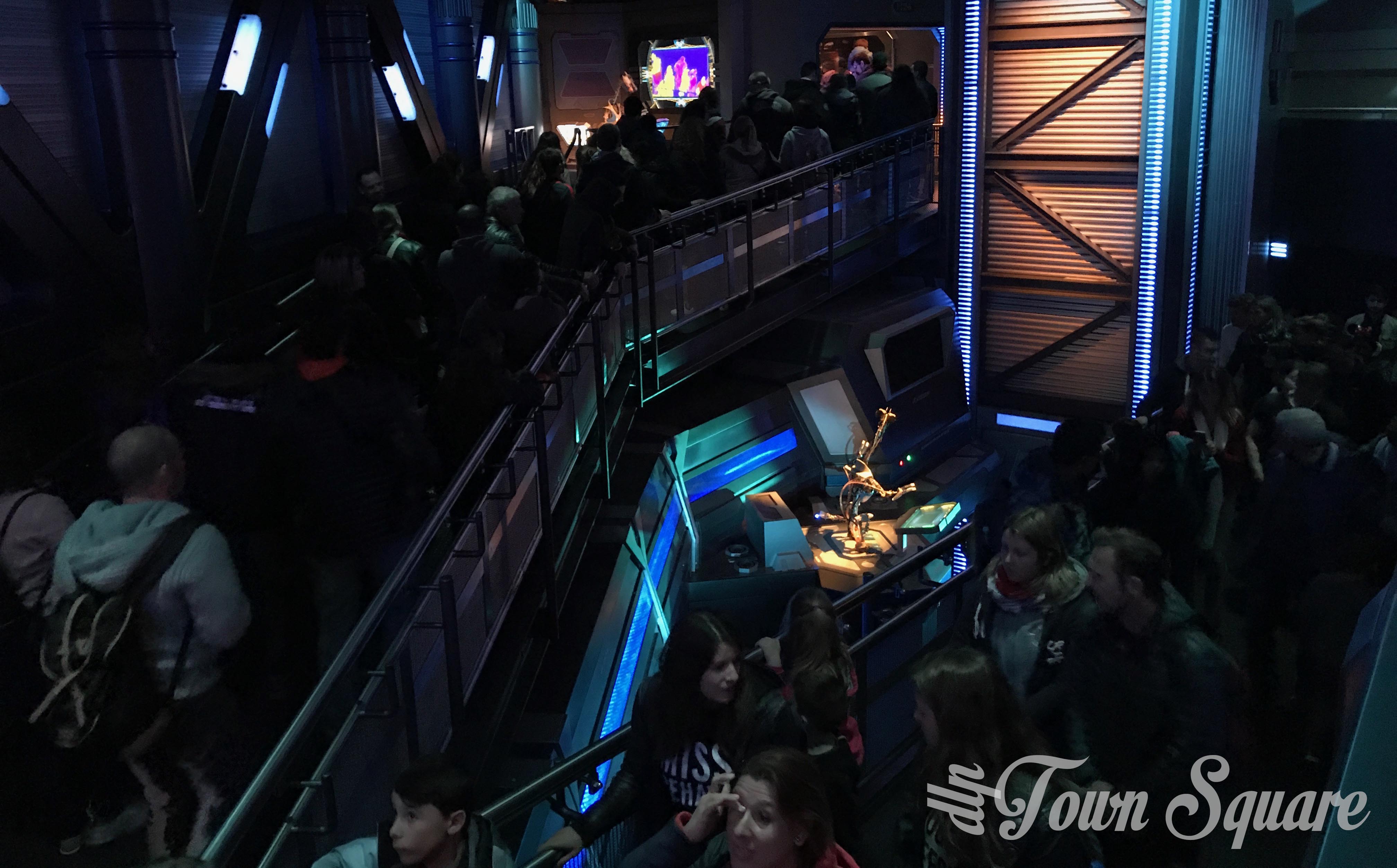 Another not-so-hidden gem in this room is the walk way, here we see various Star Wars characters go past from each and every film. It is a small element but entertaining nonetheless and is a suitable replacement to the baggage carts overhead from the previous iteration. The final surprise is the ‘heat detector’, this is the ultimate gimmick but guests love seeing their heat pattern appear on screen and will start waving and having fun in front of the screens. It doesn’t feel like much, but it’s clearly very appreciated by guests.

The ride itself is phenominal. Whilst the clear selling point is the sheer number of scenes that can be enjoyed, the real sticking point after having ridden the ride is simply how fun it is. It is proper immersion into the Star Wars universe and a lot of fun as well. Personally, I came off each of my rides grinning from ear to ear with the amount of fun that I enjoyed. Perhaps what Star Tours: L’aventure continue does better than the original Star Tours is incorporating familiar scenes at a high intensity. Yes, the original had the Death Star trench scene which is as iconic as Star Wars comes, but this new version allows Darth Vader, Yoda, Leia etc to show up as well as the possibility to follow the Millennium Falcon. 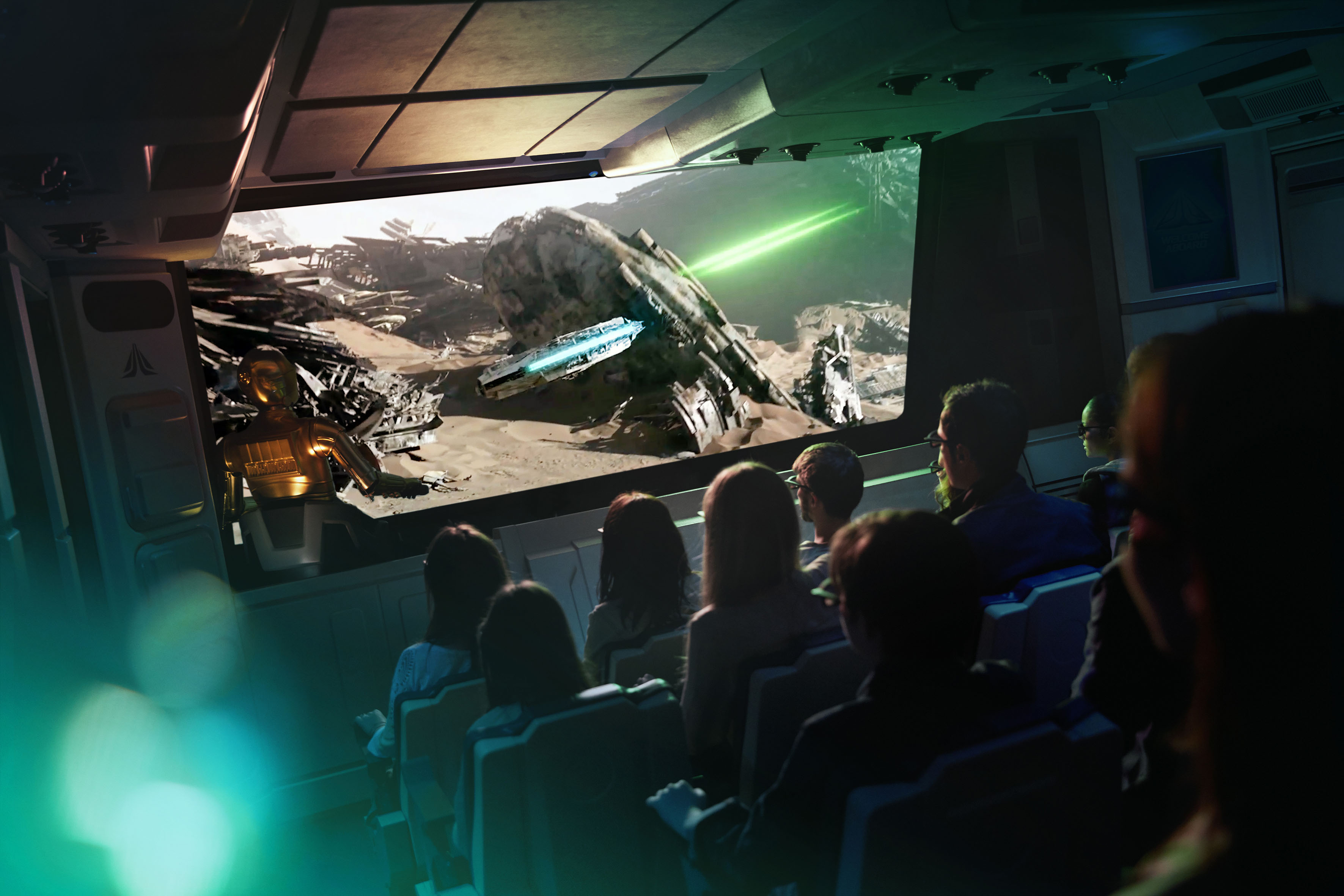 Each planet follows a clearly different series of movements with the clear highlight being Jakku and the pausing on an angle for a few seconds. Fans of Hoth will be thrilled with the possibility to visit this planet and then zoom into hyperspace and go back to the Death Star (yes, the dream of fighting against the Death Star can still be lived in this new version). What makes this ride doubly exciting is that new scenes will be able to be slotted in with ease allowing for us to be surprised with some eventual The Last Jedi footage.

The 3D element was very well done and was utterly believable which was a nice addition as often 3D feels very gimmicky and not an enhancement to the story; here in Star Tours though, it slots right into the Star Wars universe and allows additional elements of the story to come to life.

The ride, which was already unmissable, is now even more unmissable as you will want to be riding it several times each trip in an attempt to see each of your favourite scenes. I cannot wait to return to a galaxy far, far away.

But the ride is not the end of the Star Tours experience. The reimagined Star Traders boutique makes a fitting ending to the experience and is Europe’s largest Star Wars shop. The selection of merchandise is sufficient for what it seeks to achieve however lacks exclusive items to Disneyland Paris. A lot of what is on offer is generic Star Wars ranges that can be found almost anywhere. Of the exclusive merchandise, there is a really nice Star Tours: L’aventure continue t-shirt, pin and keyring which each look fantastic. There is also a station where you can create your own droid which is inventive and really quite cool. A few more exclusive to Disneyland Paris ranges will make this store unique and one of the best in Disneyland Paris.

The decor is very well designed with Starspeeders in their port. Essentially the theme of this store is to look up as it is all above your head. But it exists and looks exceptional. 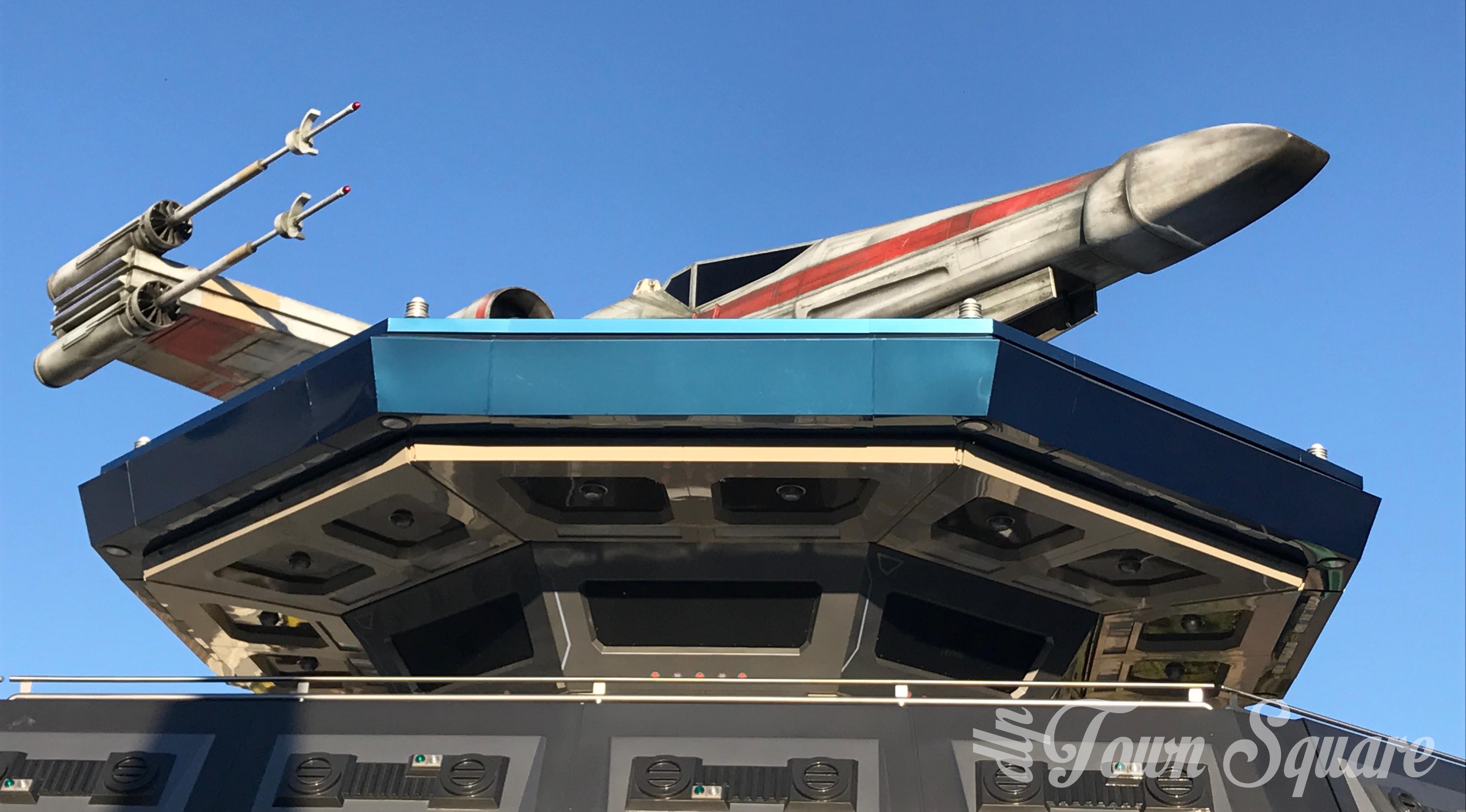 The final element of this new Star Wars mini-land is the Starport meet and greet space. There is not much to the queue area as it all takes place outside and is a simple out and back system around the edge of the old Star Traders store. Inside, however, has been themed to the Star Wars universe in a rather generic way but allows for great photos with the characters.

Darth Vader himself is a fun meet and greet from the outset. From the moment he comes to grab you from the queue to the end, it is a chilling experience. The addition of Darth Vader actually being able to talk to you is very well executed and has a wide range of phrases that allow for a fully-interactive meet and greet.

An exceptional addition to Disneyland Paris!

Star Tours: L’aventure continue is a wonderful addition to Disneyland Paris that places the resort at the centre of the European Star Wars universe. This alongside the newly launched Soirée Star Wars and Season of the Force provides guests with reasons to visit and revisit the park frequently. Even for the most casual guest, this area of the park is a welcome addition and completes the Discoveryland experience. Just like Frontierland feels strange without Big Thunder Mountain or Phantom Manor, Discoveryland really felt lacking without Star Tours – it is now back and better than ever and will allow for adventures for many years to come! 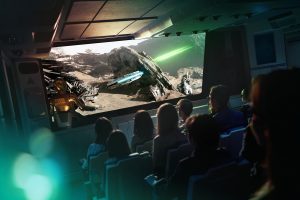 Star Tours has reopened at Disneyland Paris as Star Tours: L’aventure continue. With it, a new experience of over 70 different combinations of ride meaning