First of all, let’s say that I’m a huge fan of the season. I really do think Disneyland Paris have created something that, in future years, could really be quite special. The first sight of Swing into Spring occurs on Main Street Station and really is impossible to miss. 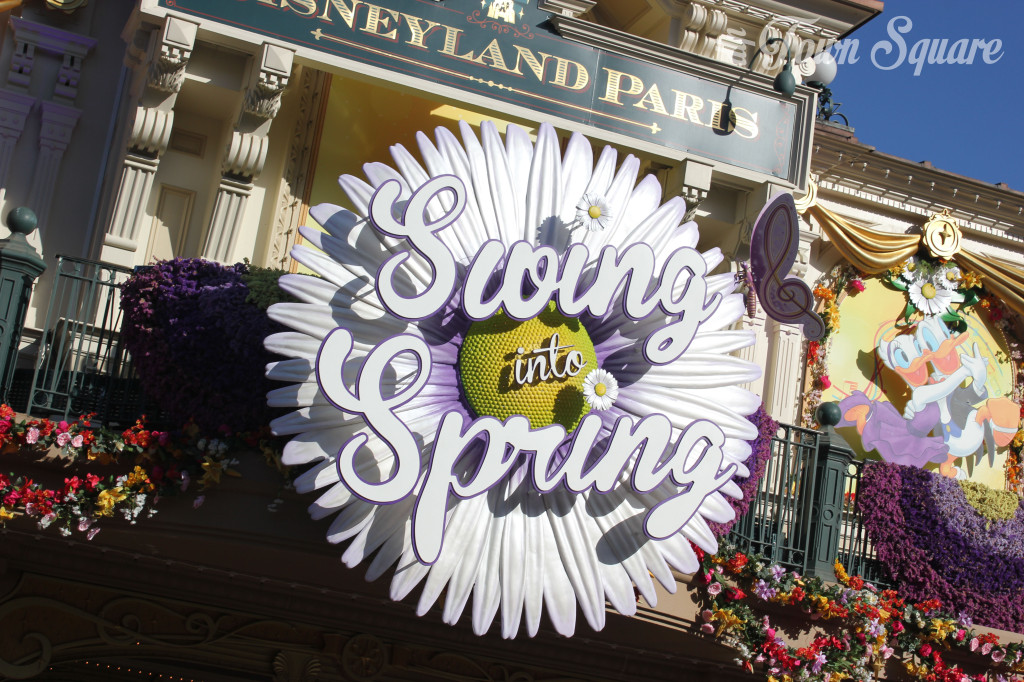 Admittedly, when I saw this as a photograph on Twitter; I was less than impressed. However, in real life this sign actually looks quite good. It sets the guest up for what they may expect from the season and provides a nice, meaningful introduction to the park. It is at night, however, that this sign really comes to life – quite honestly it looks spectacular. The changing of colours, which the sign does frequently, works very nicely. 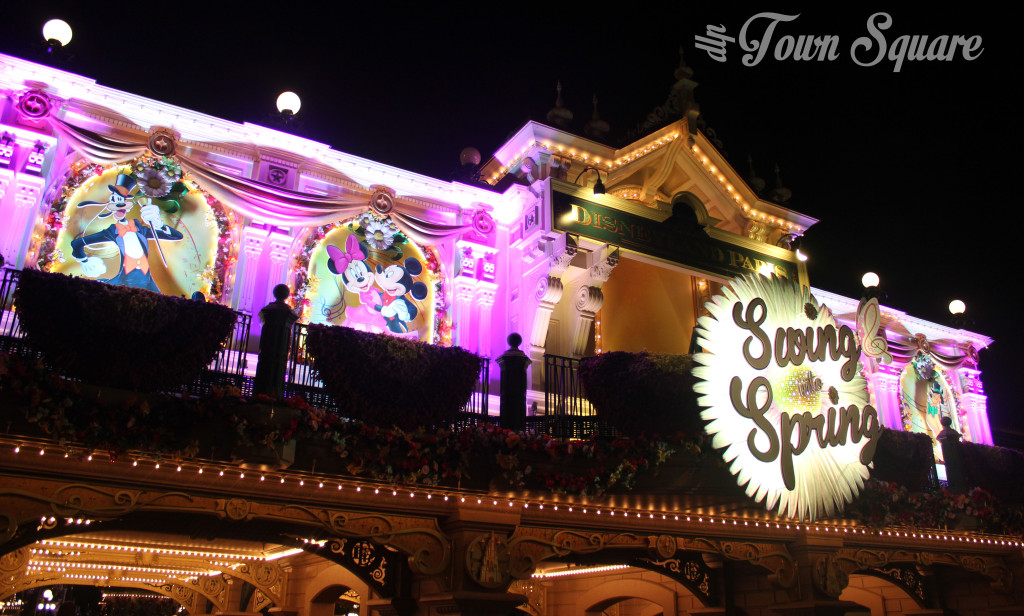 Moving onto Main Street USA and one of the first things you’ll notice (as a Disneyland Paris fan) is that the Main Street loop is a little bit different during the daytime. I’m not talking about different pieces of music, I’m talking about birdsong. This is the smallest little touch, but adds something rather nice to the feeling of the street; it is done tastefully and effectively.

Town Square has had a good overhaul with daffodils occupying the grassy areas and a joyfully decorated Town Square gazebo featuring music notes, flowers and penguins from the film Mary Poppins which celebrates its 50th anniversary later this year. 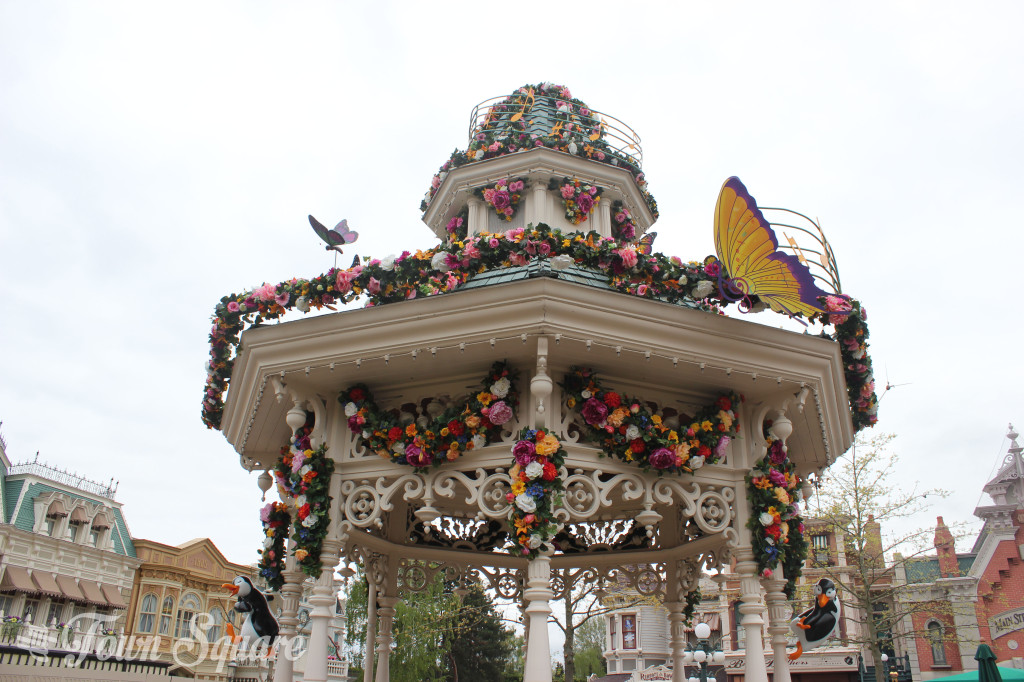 Staying on Town Square for a moment, we also have a Mary and Bert topiary as well as a Jane and Michael topiary. These are very well done and provides a nice introduction to Main Street as well as a method of setting the scene for this Spring festival (which takes heavily from Mary Poppins). 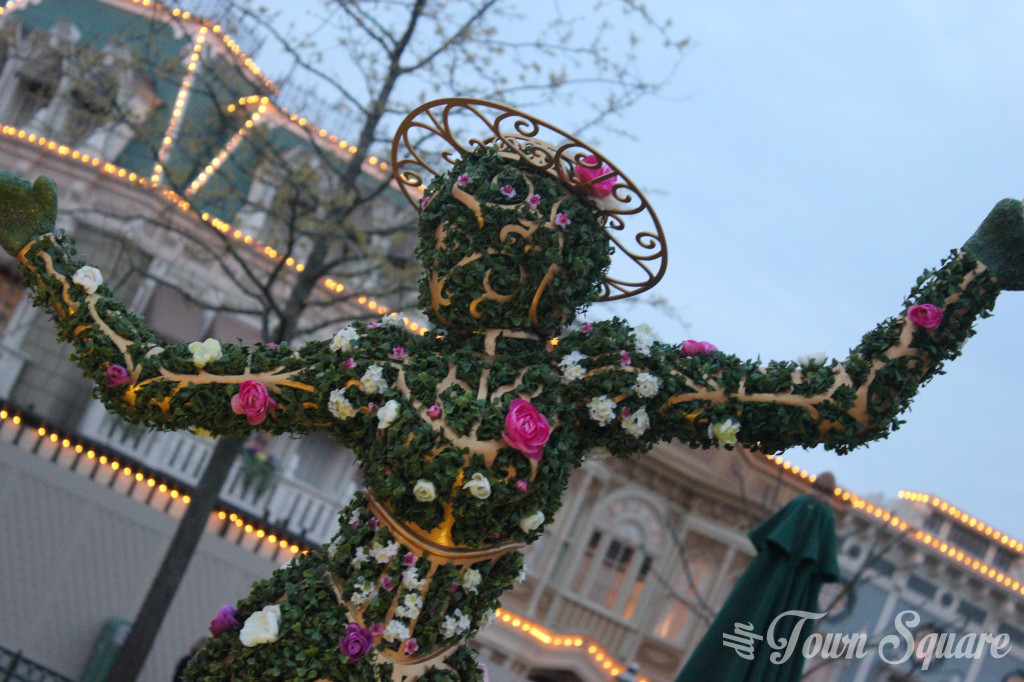 The Boarding House has also received decorations for the Duffy meet and greet. 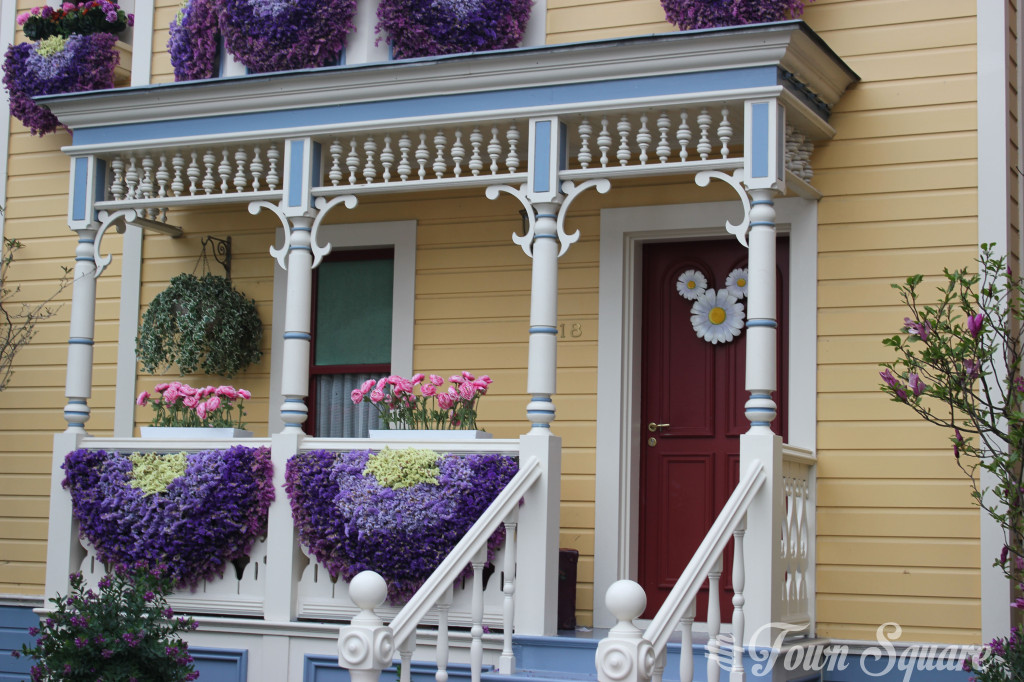 So, Town Square is looking nice; it has been decorated, but at no point does it feel ‘over the top’. As we move on down Main Street USA there is very little to show for a spring festival except for a few nice looking flower baskets. This is a great shame, there was a real opportunity to really put some nice flowers on the Main Street buildings. It doesn’t take a lot, I don’t want Main Street looking cheap, but a few tulips here and there on a balcony would look realistic and would re-enforce the theme.

It is in Central Plaza where we see the majority of the Spring decorations with four good-sized topiaries. The first of which represents The Lion King with Simba and Nala prancing around. This one was perhaps my second favourite topiary. The playful leaping really seemed to encompass the Swing into Spring season at Disneyland Paris. Add to that the beautiful photos you could get of this one in front of the castle. – In fact, all these topiaries were well designed for castle photos. 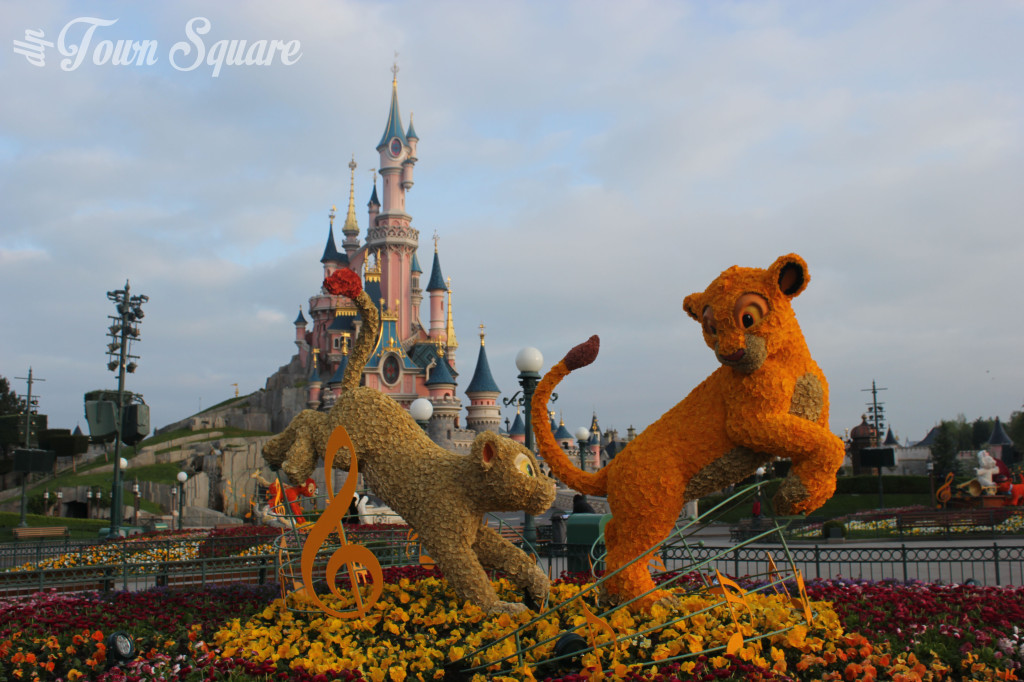 Moving around Central Plaza and we get to the Bambi topiary. This one worked well when concept art was leaked, and looked fine. But next to the Lion King and Aristocats, it just seemed to lack something. That’s not to say I don’t like it, I do. It just isn’t my favourite. The Spring link works well in this one with Thumper present. 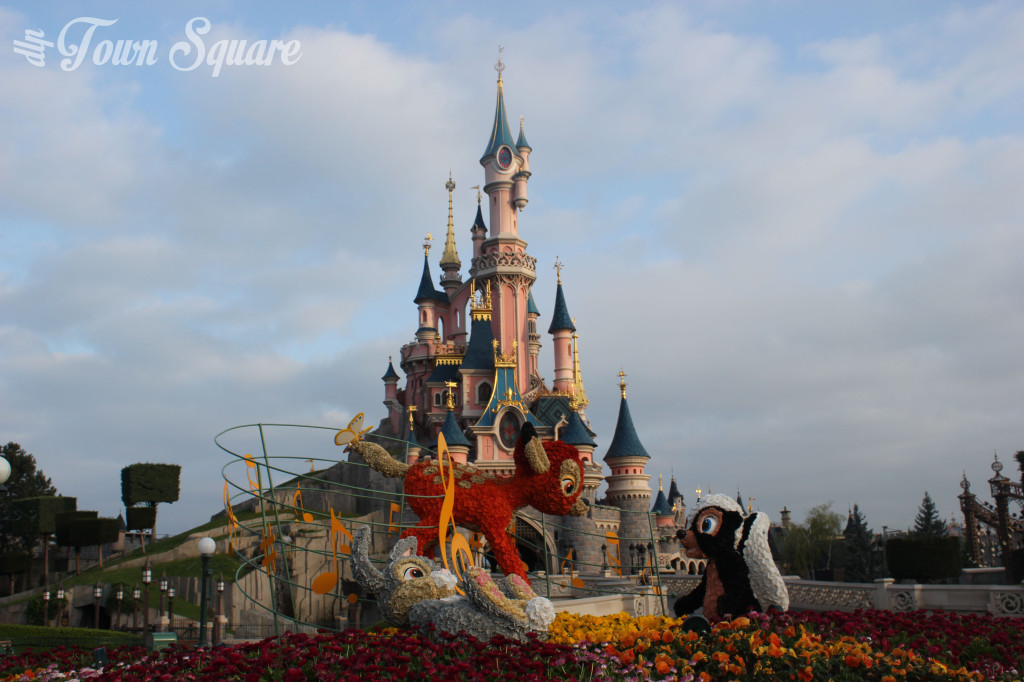 Next up was my favourite of them all. The Aristocats topiary really had something special. The art work of the festival really was all designed around a musical theme (and something I hope develops in the future), and so this one just seemed to work well (add to that a rather impressive pin badge that was released of it too!). 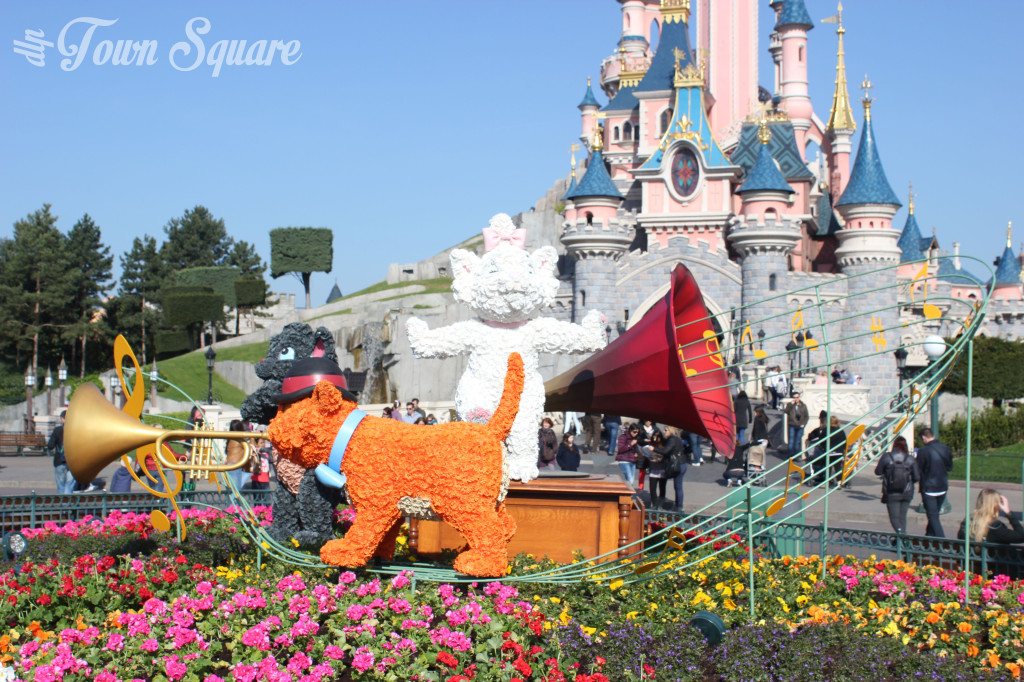 My least favourite topiary was the 101 Dalmatians one. And that was probably because I never did quite get the hang of getting a photo of it looking good – it was just too small! But again, works well with the season. It would be nice to see it made a tiny bit bigger. 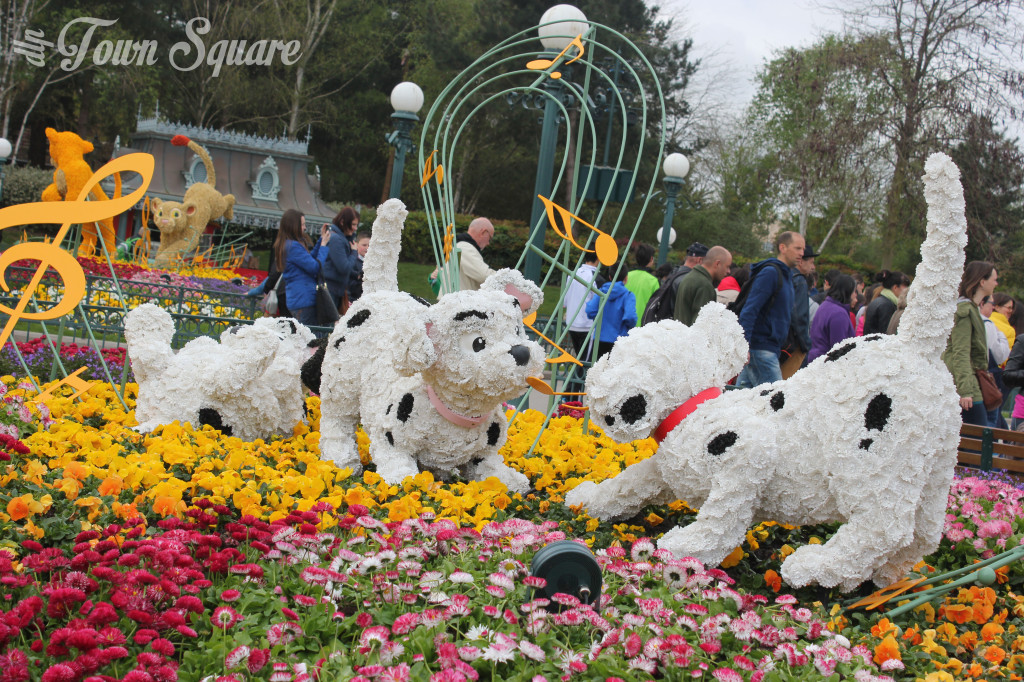 Over near Casey’s Corner was the Rapunzel meet and greet which looked nice, her queue was way too long and so unfortunately I didn’t get around to meeting her. 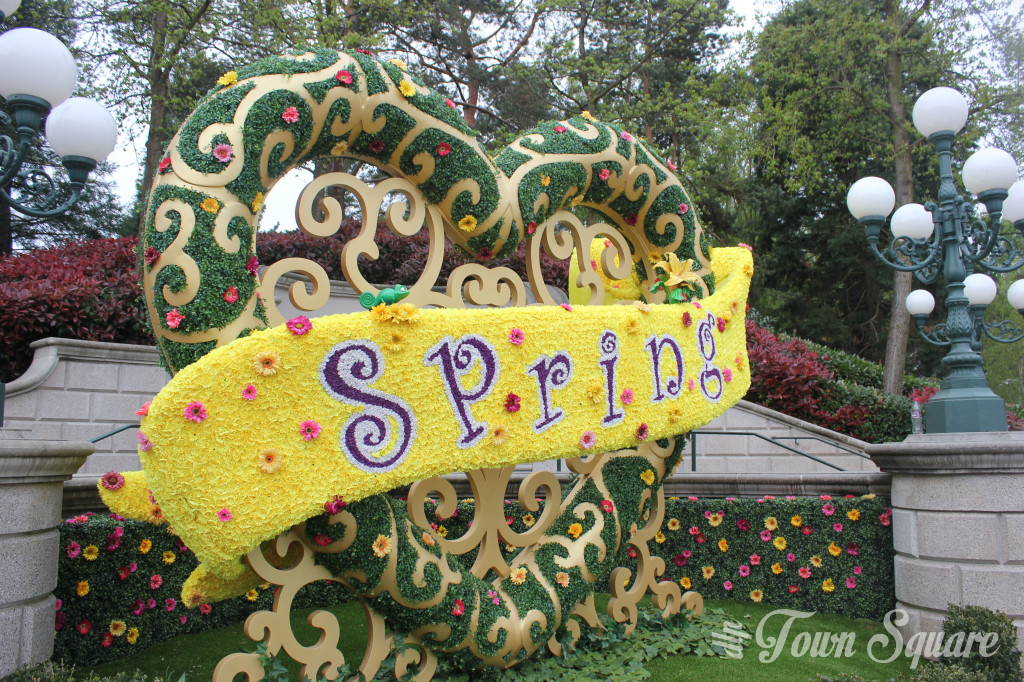 Finally for the Spring decorations, we should probably mention the Royal Castle Stage (which was finally used!). It was decorated in a way that was functional for the show and give a spring edge to it. I won’t talk too much about it as that’s to come in an entirely separate article. 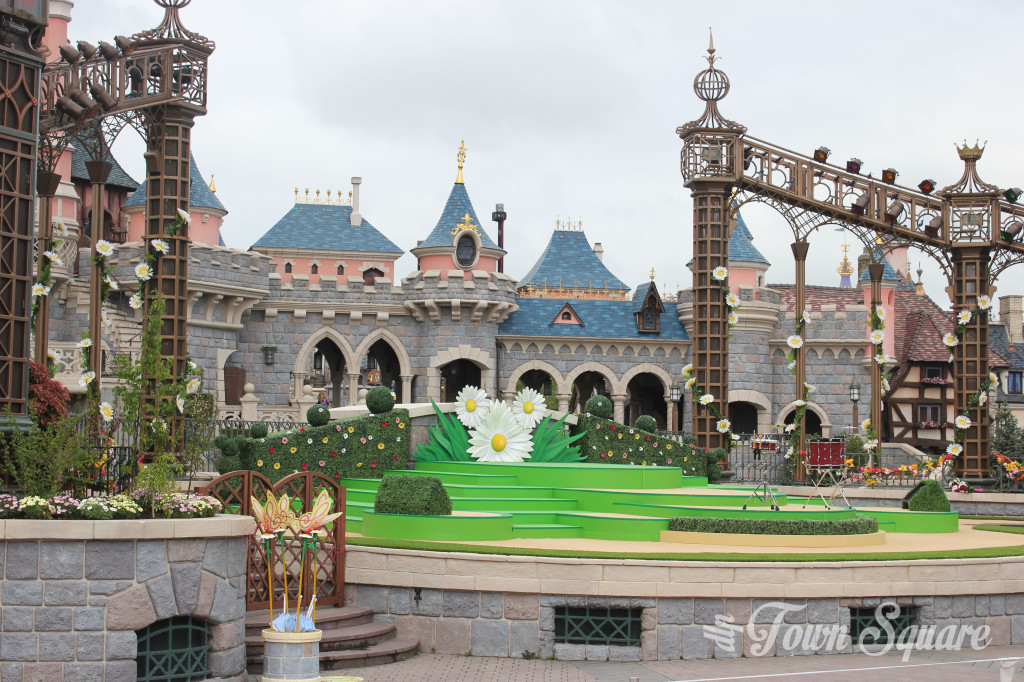 In conclusion, Disneyland Paris’ Swing into Spring decorations add a nice touch that guests seemed to really enjoy. They both added colour and focus to the park and fitted well to the festival. Now Disneyland Paris, for next year we want even more! And why not, it’s the perfect opportunity for the talented Disney gardeners to really show off what they can do!

Disneyland Paris launched their new Swing into Spring season on the 5th April to a high amount of praise. The season boasts new shows, decorations and