Space Mountain at 25: An extraordinary journey

Space: The next frontier

When Disneyland opened in Anaheim, California in 1955, Space Exploration was still just a dream. Man had not landed on the moon, nor had it even been into space itself; but Space was something that captured public attention as the ‘Next Frontier’, something that Disneyland capitalised on with Tomorrowland – Rocket to the Moon being an opening day attraction. The attraction was an immediate hit as guests clambered to find out what it would be like to blast off into outer space. In 1975, 6 years after Neil Armstrong walked on the moon, the attraction had lost its appeal and closed and replaced with Mission to Mars; however the times caught up with this attraction and closed in 1992, replaced by a Pizza Restaurant in 1998 which remains there to this day (although this restaurant is now themed to Toy Story).

Space itself never went out of fashion, in 1975 (four years after opening), the Magic Kingdom opened Space Mountain. Whilst Walt Disney himself worked on elements of the Tomrrowland overhaul “Space Port” for Disneyland, this never quite got realised however good ideas never do die and the Imagineers picked this project back up and created Space Mountain for Florida. This attraction was so popular it was exported to Disneyland in 1977 and was an opening day attraction at Tokyo Disneyland in 1983.

When designing Discoveryland, the imagineer Tim Delaney said “I wanted to create a place that transcended time”, this alluded to a common problem in the three previous versions of Tomorrowland which were in a constant game of catch-up with the world in which we live in. For Disneyland Paris, a visionary version of the future was dreamed up, one that took inspiration from the stories of H.G. Wells and Jules Verne. It’s centre piece would be a glimmering golden-bronze structure called Discovery Mountain.

This structure was due to be much bigger in scope than it is today and would encompass a Space Mountain style rollercoaster, an underwater Nautilus restaurant, Discoveryland Station on the Disneyland Railroad and Star Tours. You would be in outer space for your entire time within this structure. Regrettably this vision of Discoveryland did not quite happen and the park opened without Discovery Mountain or Space Mountain. Discoveryland has a great big hole in the middle just waiting to be filled.

Of course, if you look hard enough, you will still see elements of Discovery Mountain that did make it into the parks, on the side of Café Hyperion there are two orange round portholes, these were originally designed to connect into the Space Mountain structure and if you look very carefully around the land you’ll still see walkways and structures with ‘DM’ logos. Whilst this dream didn’t quite come to life, another did as we blasted off de la terre à la lune…

Inspired by the Jules Verne novel ‘From the Earth to the Moon’ (De la terre à la lune), Space Mountain at Disneyland Paris was rather unique amongst Space Mountains across the world. In the novel, Michel Ardan embarks on a crazy adventure to the moon by catapulting a bullet type structure to the moon. The Disney attraction also featured a catapult on a mission through the Columbiad to the moon.

The attraction leaned heavily on copper steampunk design for its appearance (an appearance that remains largely untouched to this day) which in itself was by Verne’s contemporary Albert Robida. Other inspirations included Georges Méliès’ adaptation of the novel which featured a smiling face on the moon. Verne himself featured on the attraction wearing a space suit in an asteroid field.

Above all, Space Mountain: de la terre à la lune was a milestone in Disney Parks. It was the first rollercoaster to feature an inversion in the dark in a Disney Park and the first rollercoaster in the world to feature onboard audio in the dark. The Steve Bramson soundtrack was a masterpiece in audio storytelling and remains a Disneyland Paris classic despite no longer being used.

Ten years following the opening of Space Mountain, the classic attraction closed for a refurbishment, but not everything would be the same upon its return…

In 2005, Space Mountain: Mission 2 opened in place of De la terre à la lune, for this the imagineers came up with a new story that followed on from the Jules Verne classic. Gone was the idea of travelling to the moon and gone too was the Steve Bramson score. In its place a mission to the edge of the universe with a Michael Giacchino score which was inspired by 1970s Sci-Fi series.

Not only that, but the ride was reprogrammed with the guests beginning their acceleration lower down the canon, more comets and planets were added to the attraction to simulate flying much further than the moon. Perhaps the most thrilling section was passing through a red vortex known as the “hypergate”, this allowed guests to return to Earth whilst travelling at speed.

The attraction came under constant criticism from the fan community who never could understand why a strong thematically correct (to the Discoveryland story) attraction would be altered. Little did they know, worse was to come.

Star Wars: Hyperspace Mountain is the third version of the Space Mountain saga at Disneyland Paris. Opened in 2017 for the 25th anniversary of the resort, Hyperspace Mountain takes place in a hybrid Victorian queue, Star Wars space battle (hey, it did take place A long time ago, in a galaxy far, far away; you just didn’t know that was the 19th century!).

Guests blast off to music from John William’s Star Wars theme and take place in a space battle surrounded by TIE fighters, Star Destroyers and X-Wings.

The history of Space Mountain at Disneyland Paris is all over the place, it was the attraction that saved the resort but also the attraction that has allowed the destruction of the theme of Discoveryland and the thing you can point to as being the least in keeping with the land. However, keeping that glorious copper domed building is essential as it is not just one of the most beautiful structures in Disneyland Paris, but essential to keeping the history of the resort alive. As for the future, who knows where we go from here; it is sure to eventually receive yet another refurbishment, but to what? 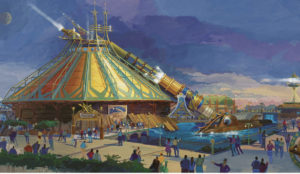 Space Mountain at 25: An extraordinary journey

It was June 1st 1995 that Space Mountain blasted its first guests from the Earth to the Moon. One night earlier a rocketman serenaded the