Today, Thursday 16th June 2016, Disney open their first theme park in Mainland China. This new park promises to alter our perceptions of what a Disney Park is by being Authentically Disney, Distinctly Chinese. The primary method of becoming distinctly Chinese is by radically altering the traditional layout of the park. Mickey Avenue replaces Main Street. Frontierland or any elements of American history is airbrushed out to create something new and exciting. But does it achieve the large goals it has set itself?

How is Shanghai Disneyland different?

There are a great many differences in Shanghai Disneyland. The concept of Disneyland is entirely reimagined for this special park. Storybook Castle is the centre piece of the park and surrounding it is a beautiful garden. This is not the only difference. Main Street USA has been removed in favour of Mickey Avenue. In fact, mentions and references to America are absent here. Frontierland is the major absentee; Fantasyland, Tomorrowland and Adventureland, or versions of, have all found their way to Shanghai. Joining them are a host of new lands including: Mickey Avenue, Gardens of Imagination and Treasure Cove. All in all, Shanghai Disneyland manages to balance the familiar with the new, meaning that all Disney fans will enjoy the feeling of something novel, but not feel overly distant from prior parks.

A new street, inspired by Disney stories, greets guests to this new park. Mickey Avenue sets the goal of familiarizing guests with these Disney characters before they enter the other themed lands. It all begins in Celebration Square, this leads off to several districts. Market District is an area towards Adventure Isle and Theatre District towards Tomorrowland.

Mickey and Pals Market Café is a counter service restaurant. It offers a range of Chinese and International inspired menus and provides amazing views of the Gardens of Imagination and the Castle. Inside there are several themed dining rooms including: Mickey’s Galley, Tony’s (Lady and the Tramp), Daisy’s Café, the Three Caballeros and a Covered Alleyway.

Rémy’s Patisserie is a beautiful French bakery inspired by Disney-Pixar’s Ratatouille, the restaurant will offer a range of bakery products such as breads, muffins and pastries. The tiny scaffolding will reinforce the idea that Rémy himself is creating the food. The rest takes on a traditional French theme.

Finally, Sweethearts Confectionery takes its inspiration from Minnie’s childhood home. The shop boasts beautiful murals that tell the story of Mickey and Minnie’s relationship. The shop sells fresh snacks that are sure to tempt guests of all ages!

The street welcomes character meet and greets with characters such as Duffy the Disney Bear. The street also provides some signature snacks, such as the first ever Donald shaped waffles.

This second brand new land has been created exclusively for Shanghai Disneyland. A couple of Disney classic attractions have found their way to this new home, and for the first time in front of the castle! Dumbo the Flying Elephant and the Fantasia Carousel. The land is tailor made for Chinese interest in gardens, it also provides viewing space for the Castle stage show and the evening spectacular.

Perhaps the most notable feature of this land is the Garden of the Twelve Friends. This special area features Disney characters as Chinese Zodiac signs on a mosaic wall. And for those who are curious, here are the zodiac signs and their related Disney character:

The Gardens of Imagination also offers fantastic meet and greet opportunities such as the Marvel Universe attraction. Here, guests will be able to meet their favourite Marvel super heroes and see some of their special technology. Here, guests will also have the unique opportunity to become comic book artists with drawing lessons from a cartoonist.

Meet Mickey has become a staple of the Disney Parks experience. Shanghai Disneyland is no different! The new look Mickey Mouse is here to greet guests each and every day. Then, guests can learn some Tai Chi with the Disney characters in Melody Gardens.

Shanghai Disneyland boasts the biggest Disney castle in the world, as well as the most interactive castle. The castle is a veritable destination in its own right, containing shops, restaurants and multiple attractions!

The “Once Upon A Time” Adventure is an interactive experience that takes guests through a Snow White story – which is presented for the first time in computer animation. Guests will trace the story in a series of rooms and experiences and state-of-the-art special effects. Underneath the castle is the Voyage to the Crystal Grotto which forms part of Fantasyland.

Storybook Court is a princess meet and greet location within the castle itself. Guests will know which princesses are meeting that day by a regal sign placed outside the attraction, the backdrop for the meet is equally as regal ensuring that guests will have amazing photographic memories to keep forever. The Royal Banquet Hall offers princess dining within the castle. Different dining rooms are themed to different Disney princesses including: Cinderella, Sleeping Beauty, Tiana, Mulan and Snow White.

A new musical show takes place on the stage outside the castle. Golden Fairytale Fanfare features Anna, Elsa, Ariel and Merida in a show featuring special songs created exclusively for this event in Mandarin Chinese. In the evening, the spectacular “Ignite the Dream” show will light up the skies. This projection mapping spectacular combines amazing visuals with beautiful fireworks to provide each guest with the perfect kiss goodnight.

A land that is familiar to all Disney Parks fans. The whimsical land of dreams and fantasy is present in Shanghai too. Whilst the land and its themes will be familiar to fans, the attractions have new life to bring them up to date for a new Chinese audience.

Voyage to the Crystal Grotto is an exciting new attraction that takes guests through enchanted Disney worlds on a cruise around the castle waterways. The exciting finale of the ride takes place in the grottos underneath the castle where the walls come alive in colour and light. Also new for Shanghai Disneyland is the Alice in Wonderland maze. This may seem familiar to Disneyland Paris fans, however there are some key differences. This maze is based on the Tim Burton Alice in Wonderland film series. The Hunny Pot Spin is a new take on a classic Disney favourite, this spinning hunny pot ride replaces the Mad Hatter’s Tea Cups.

Returning favourites include an all-new version of Peter Pan’s Flight with updated special effects and a brand new ride system. The Seven Dwarfs Mine Train which opened in 2014 at Walt Disney World Resort and The Many Adventures of Winnie the Pooh. A Frozen sing-along celebration is also in this version of Fantasyland.

The Fantasyland food offerings are something very special for all Disney fans. For the first time, guests can eat in the Tangled Tree Tavern which is inspired by the Snuggly Duckling in Tangled. Pizza fans can tuck into a pizza that is cooked in the park’s pizza brick oven in Pinocchio Village Kitchen.

Tomorrowland in Shanghai is very different to any other Disney resort. The core concept remains the same, it is a futuristic vision of the world. However, gone is Space Mountain and Star Tours and in comes Tron Light Cycles and Jetpacks. Tomorrowland in Shanghai seeks to celebrate ‘the hope, optimism and the potential of the future.’

The big new attraction here is TRON Lightcycle Power Run, this new and innovative ride has been delicately created exclusively for Shanghai Disneyland. Guests here ride on top of the iconic Lightcycle as they enter the grid. The canopy of the ride contains lighting that completely changes the night sky of the land.

Buzz Lightyear Planet Rescue merges the ride you know and love from the other Disney resorts around the world, and adds brand new effects. The Shanghai version of this attraction boasts over 100 targets to shoot – the most anywhere in the world! Jetpacks is a new spin on the traditional Orbitron style of ride. Guests will be strapped to a jetpack and will be able to control their height and have fantastic views of Shanghai Disneyland. The Stitch Encounter attraction also makes its way to China. Star Wars fans have not been forgotten with the Star Wars Launch Bay area featuring meet and greets with the characters from the films.

Food options in Tomorrowland are based at the Stargazer Grill, this outdoor restaurant serves both Chinese and Western food and has a viewing area of the Enchanted Storybook Castle.

Adventure Isle is another land that is new for Shanghai Disneyland. The land takes its inspirations from the existing Adventureland found in other Disney resorts. This, however, is bigger. Adventure and Discovery are the core themes here, and it is the guests who will be doing the discovery through various interactive experiences.

Camp Discovery is where all this adventure begins. Here guests explore ancient ruins and dig sites to find relics. Guests will trek past waterfalls and look at ruins in this adventure by elevated ropes. There is a choice of two trails so that guests can create their own experience.

The highlight of Adventure Isle is undoubtedly Roaring Rapids. This marks the first time that a rapids style attraction has made it to a Magic Kingdom style park, guests will set out to discover the truth about a tribal legend of a reptile by the name of Q’araq. This attraction features one of the largest mountains that Disney Parks have ever produced. Soaring over the Horizon is a brand new Soaring adventure which will take guests on an exciting voyage around the world without ever having to leave their seats. This attraction also features a stunning walk-through element that will leave guests breathless.

A new original show is also present in the land: Tarzan: Call of the Jungle is a high-energy retelling of the Tarzan story. The show fuses Chinese acrobatics and musical elements to create a perfect blend of intrigue for guests both familiar and unfamiliar of the Tarzan story.

The final land that is unique to Shanghai Disneyland is Treasure Cove. This marks the first time that Disney have created an entire land themed to Pirate adventures. The centerpiece of the land, and possibly the entire park, is Pirates of the Caribbean: Battle for Sunken Treasure. This ride combines a brand new ride system and technology elements to create the most immersive Pirates experience ever. Boats here travel sideways, backwards and forwards and can spin round to create a dynamic and exciting experience.

Shanghai Disneyland also presents a stunt show in the Pirates universe: Eye of the Storm: Captain Jack’s Stunt Spectacular. The show brings together special effects and sword fights that will satisfy all guests needs for a swashbuckling adventure! One of the largest eateries in the park is Barbossa’s Bounty, this quick service restaurant takes its setting within the Pirates ride and offers Asian barbecue cuisine.

Shanghai Disneyland is an exciting blend of old and new. The new, large park offers maximum breathing space and beautiful environments allowing for guests to fully immerse themselves in these new stories that have been especially created by Disney for the Chinese audience. This is a park that should enter all Disney fans bucket lists immediately! 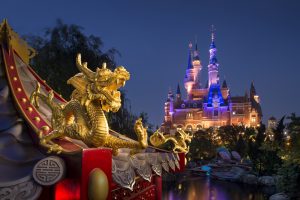 Today, Thursday 16th June 2016, Disney open their first theme park in Mainland China. This new park promises to alter our perceptions of what a