Season of the Force – Reviewed!

Disneyland Paris: Where Star Wars lives. That was the marketing tagline for the new Season of the Force celebrations in Disneyland Paris. But does this season deliver? Is it enough to draw guests from Disneyland Park to the Walt Disney Studios Park?

Season of the Force was a gamble. Launching a brand new seasonal celebration, which includes a large evening projection show on the Tower of Terror, at this time of year is a big risk. The early months of the year in Disneyland Paris are notoriously quiet, it is the time to visit if you want to avoid people and walk right on to the rides and minimise your wait for characters.

So did the gamble pay off?

Part of the Season of the Force celebrations is the First Order March which sees Captain Phasma march through the park with her squadron of Stormtroopers. She then stops at the new stage, a stage especially erected for the Season of the Force, and commands an overwhelming show of force. It is a very carefully choreographed display that is enjoyable to watch. Once.

The show falls sort of flat upon repeat viewing, there are only so many times you can enjoy Stormtroopers walking in formation and marching around a stage in the same formation.

That isn’t to criticise the happening too much. This is a fun little happening that deserves a watch once on the stage, and a second watch as they march through the park. Perhaps this show would be more effective if it was a random happening that was unannounced.

This was a cool idea, in theory. There were visions of Stormtroopers wandering around the park, looking menacing and interacting with guests in a fun and unique way. Yes, they would stop for pictures but it would be a potentially different style of character event.

The reality? Well, it was a bit different. Two Stormtroopers appeared, took photos with guests in one location. Moved to a second, took more photos and went inside. It was a cool character meet, the troopers had some very cool dialogue lines that sounded menacing and added a cool layer of interactivity to the meet.

The centrepiece show during the day time was Star Wars: A Galaxy far, far away. This spectacular show was a real highlight of the celebrations and was clearly designed to show off the characters from the saga but it works. The show is both a spectacular event and a fitting tribute at the same time.

The show brings out the Star Wars fan in everybody and takes the best bits from the saga and displays them wonderfully. The character appearances will make even the hardest person to please grin with joy. This is fan service at its finest….

Or rather, it was fan service at its finest. Star Wars: A Galactic Celebration goes one further. This is the focal point of the Season of the Force celebrations. The Tower of Terror becomes a focal point for a projection extravaganza. The stage-based elements are not overly different to that of A Galaxy far, far away, though there are a few subtle differences. The real star is the projections. Various scenes from the Star Wars saga are projected onto the tower.

The show is designed to drag you away from Disneyland Park and Disney Dreams! and to allow you to enjoy alternative entertainment. This is the first time the Walt Disney Studios park has offered evening entertainment and it truly is top quality. The choice between Dreams! and this is a difficult one and this is a show deserving of its guests. The only wish is that this show was on every night, year round!

Season of the Force has shown a promising start. Is it the greatest season Disneyland Paris has ever produced? Of course not. It is, however, a delightful way to spend a day in Disneyland Paris during the low season. It achieves its secondary goal by bringing a new demographic to the resort and potentially allowing them to discover the magic that is created when visiting a Disney park.

Disneyland Paris really is making a name for itself as the place where Star Wars lives. 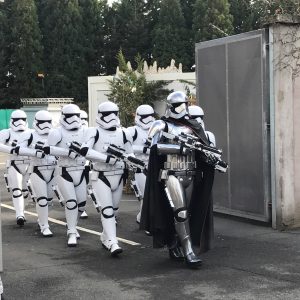 Season of the Force – Reviewed!

Disneyland Paris: Where Star Wars lives. That was the marketing tagline for the new Season of the Force celebrations in Disneyland Paris. But does this