You’re invited. As simple as that, one of Disneyland Paris’s biggest ever advertising campaigns had begun promising a year of celebration like no other. The fifth anniversary was celebrated by a ‘Hunchback of Notre Dame’ style celebration, the 10th was marked by a whole new Disney park opening. But none of these really made a big point about ‘celebration’. For the 15th anniversary this was all to change, not only would we celebrate like never before, we’d enjoy no less than four new attractions, a new parade, new character experiences and new shows. The red carpet was rolled out, the castle decorated. The party was set to begin, and how best to announce the start of a party? With an evening extravaganza filled of wonder, music and Disney friends. (Video: DLRP magic)
The launch was one of Disneyland Paris’s most star-studded to date featuring performances from Daniel Powter before the opening of the celebrations to guests the next day by Miley Cyrus from the Disney Channel series Hannah Montana.

2007 was a bumper year for new entertainment in Disneyland Resort Paris starting with a brand new parade, Disney’s Once upon a dream parade, running from 2007 until 2012. Each all-new float was given a name relating to the themes it represented such as ‘Dreams of Power’, which featured the Disney villains. Whilst the theme song for the anniversary was ‘Just like we dreamed it’, each float of the parade featured its own soundtrack, a soundtrack that can still currently be purchased within the resort on the ‘Les parades en musique’ CD. (Video: DLRP Magic!)

In addition to the traditional daily parade, Disney characters could also be seen, for the first time, on the Disney Characters Express train, which took place on the Casey Jr. float from The Wonderful World of Disney parade. The soundtrack to this mini-parade, Tous en Train, was entirely new to Disneyland Paris having previously been performed at Tokyo Disneyland. For 6 years this parade has allowed guests to meet their favourite Disney characters, some incarnations the characters have been randomly selected (such as the 15th Anniversary version), others will see the same characters each day (Disney’s 20th Anniversary Celebration train), for those 6 years, this has been one of the most popular daily entertainments in Disneyland Paris. (Video: DLRP Magic!)
Perhaps one of the more strange parades seen in Disneyland Paris during its history is ‘Alphabet you are!’, which, according to this DLRP Today! post towards the end of its run in 2007, often scored high of guest satisfaction. The premise of this mini-parade was simple, every morning letters would dance down Main Street USA spelling out ‘Disneyland’, each letter had a unique Disney character spin on them. (Video: DLRP Magic!)
On top of all the new entertainment, the Tarzan and Lion King stage shows were almost performed multiple times daily (as well as the Walt Disney Studios stage shows).

The big selling point of these celebrations were, of course, the ‘new land’ featuring two new attractions. Toon Studio opened on 9th June 2007, both Crush’s Coaster and Cars: Quatre roues rallye opened at this time. 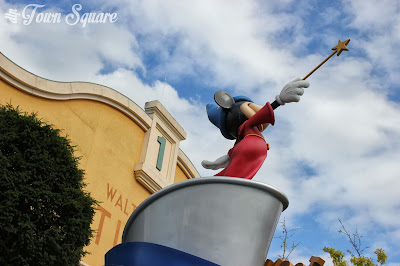 The Crush’s Coaster has become synonymous of long queues and guests, young and old, wait to be part of this rush through the East Australian Current (EAC). This attraction has stroke a perfect balance between the thrills and storyline, as we board a shell and go through the reef where guests find Nemo and Squirt, suddenly guests meet our Shark ‘friends’ and glide through the EAC whilst spinning 360 degrees, such an attraction is unique to Disneyland Paris. 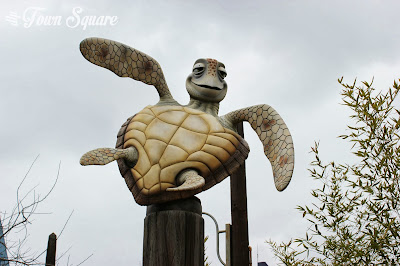 Cars Quatre Roues Rallye is a more simple attraction based on the world of Radiator Springs, but that certainly doesn’t make it any less enjoyable. Guests queue through Flo’s admiring the wall displays (which are often humorous) before boarding a car in an experience that is quite similar to the Mad Hatters Tea Cups in Disneyland Park, but perhaps slightly more thrilling. 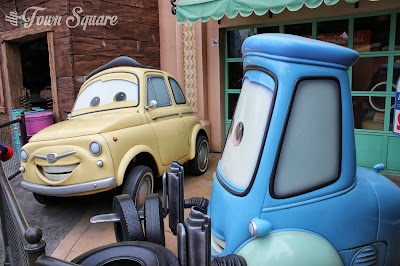 Main Street USA received decorations in the form of giant banners up the street which lit up at night featuring the 15th Anniversary emblem and one of the ‘mascots’ of the celebration Lumiere. The biggest change was the classy castle decoration. The lower window being covered over by the 15th emblem and each turret receiving a Disney character holding a candle. 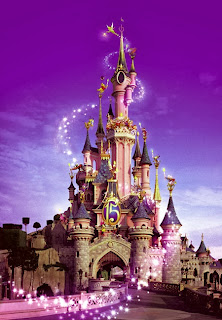 Each night, as Disneyland Park prepared to close its doors to guests, a special celebration took place in which these candles would magically come to life with a bit of help from Mickey Mouse in a ceremony featuring dancing and characters ‘Candellebration’.
In fact, Disneyland Paris extended its 15th anniversary for an extra 12 months with even more new attractions and shows, it was even marketed as being bigger than the first year with the tagline ‘The celebration continues BIG TIME!’. Urgency was added into the marketing from the outset of this extended celebration as the white rabbit holding a pocket watch appeared in the promotional material ensuring we visit the resort before we’re ‘out of time’.

This second year saw the launch of ‘The Twilight Zone: Tower of Terror’ and Stitch Live! On April 5th 2008, Disneyland Paris inaugurated the Tower of Terror in front of the worlds press in perhaps one of the resorts most impressive attraction openings since Space Mountain. The opening featured a mix of actors and video mapping onto the attraction. (Video by DLRP Magic!)

Despite the April inauguration, this attraction actually opened in December 2007, Stitch Live! however, did open closer to the press event. Stitch Live! allows guests in Disneyland Paris to watch, and become part of, a transmission to outer space; not only that, but guests could actually talk to Stitch. . This attraction is offered in multiple languages and replaced the former Disney Channel Studio Tour, Cast Members working here still wear costumes featuring the Disney Channel logo.

This extended year also saw us wave goodbye to the Disney Cinema parade, but we’d have to wait until March 2009 for Disney’s Stars ‘n’ Cars parade. Disney welcomed in the Enchanted Fireworks which ran from 2008 until 2011 before making room for Disney Dreams!

DLRP Rewind is a feature celebrating Disneyland Paris’s past. Thanks for this article go to DLRP Magic! – The Number 1 Disneyland Paris guide website and their impeccable coverage of the 15th anniversary.