1998 was a special year in Disneyland Paris history. For starters the resort would spend the year celebrating Disney classics through special shows such as Tinkerbell’s Fantasy in the Sky but most notably with the launch of a brand new parade: The Wonderful World of Disney Parade.

A parade rich in Disney heritage

From the moment Steamboat Willie came into view, guests were immersed in Disney history. Mickey and Minnie were on this iconic boat float in classic costumes. It set the scene for the parade to follow: a parade that would be modern and cool, but also with an important look back to the past. Indeed, this is what makes this particular parade unique, it was pure to history. It was not overly stylised, each float was true to property and highlighted why we love each film.

Who can forget some of the larger than life floats on the parade featuring such iconic moments such as Geppetto playing with a Pinocchio on strings. Or miniature pirate ships driving down Main Street before Captain Hook arrived being eaten by Tick Tock.

Even almost 20 years later, it is very difficult to criticise any of the floats that this parade featured in this parade. Each was beautifully designed to be larger than life and celebratory and ripped straight from the scenes in their respective films. Seeing Aladdin and Jasmine flying on a magic carpet right down the middle of Main Street was just like magic – the type of magic that excites children of all ages.

In short, the floats in this parade were cool.

The sight of Casey Jr. rolling down the middle of Main Street USA was an impressive one. Casey Jr. is an iconic Disney character in one of the first Disney animated feature films. Little did we know, however, that Casey Jr. from this parade would be here to stay for a very long time. After its stint as Casey Jr. in The Wonderful World of Disney parade, Casey Jr. would move on to be the Character express train for a few years from the 15th anniversary to the 20th anniversary. After the 20th he would move on to be used for the Swing into Spring season and in 2016 for the New Year’s Eve parade in the Walt Disney Studios park.

Hey there, Hi there, ho there, it’s a Disney kind of day

Who can discuss this parade without mentioning its soundtrack? Perhaps the most iconic individual song in Disneyland Paris history and certainly the one song that absolutely stands out from amongst all others in terms of quality and emotion.

What is the best parade in Disneyland Paris history? Perhaps this is an unfair question to ask, perhaps it is a parade that many will debate but the answer will be incredibly subjective.

Personally, The Wonderful World of Disney Parade was the first I saw at Disneyland Paris and so it holds a special place in my heart. Throughout my first visit in 1999, we would watch the parade daily and then listen to the music in the car on the way home. I still listen to the music now and it still gives me as much joy.

That is the measure of a good parade, how much joy they give the person watching. And in that measure, perhaps every parade is the best in Disneyland Paris history. 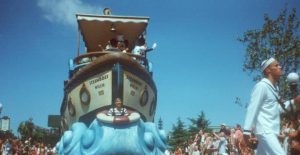 1998 was a special year in Disneyland Paris history. For starters the resort would spend the year celebrating Disney classics through special shows such as