Take a preview of Disney's Hotel New York: The Art of Marvel which opens on 21st June 2021

With just one day left until Disney’s Hotel New York: The Art of Marvel opens to the public, the Insiders team at Disneyland Paris released a comprehensive video detailing what to expect from merchandising as well as food and beverage when the hotel opens its doors. The result seems to be a labour of love from the various teams with food especially taking such a high-profile place within the hotel.

Merchandising the Art of Marvel

On reopening day you will find hotel themed t-shirts, art prints (both printed and canvases), metallic prints and more. The bonus is that these pieces of art are all in the hotel and so you’ll literally be able to take home your favourite pieces to remind you of your stay.

There are, of course, collectibles including 3D Iron Man models (the very same as you’ll see in the lobby), Spider-Man models and a whole range of Marvel merchandise from your favourite films and characters.

In the Manhattan Restaurant, an Italian chef has been working for months to bring an authentic Italian dining experience to life. All of the dishes here have been created and inspired by traditional Italian flavours, many ingredients are imported from Italy, all are paired expertly with a delicious Italian wine. Of course, it wouldn’t be The Art of Marvel without a fun Marvel themed desert!

The Downtown Restaurant is a buffet option which takes inspiration from the amazing cosmopolitan cuisine and cultures of New York. Dishes range from traditional American food, right the way to Chinatown inspired dishes. The restaurant centrepiece is a giant pizza oven allowing guests to discover even more Italian flavours.

There are also two uniquely themed bars in the hotel. The Skyline Bar will be a classy cocktail bar serving up the classic cocktails you’d expect from a New York rooftop bar. Close by, the Bleeker Street Lounge is an all-day bar serving craft beers, organic wines, as well as teas and coffee.

The full preview has been released by the Disneyland Paris InsidEars team, learn how over 1,500 Marvel themed elements have been expertly placed within the hotel as well as full details on those exciting merchandise and food and beverage options. 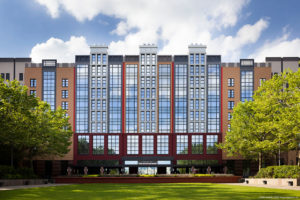 Take a preview of Disney’s Hotel New York: The Art of Marvel which opens on 21st June 2021