On the 31st December 2017, Disneyland Paris held its first ever New Year’s Eve special ticket event. The evening promised entertainment in the form of a mega parade made up of floats from seasonal and previous parades; a firework display at midnight; a dance party and a range of meet and greets to delight all Disney fans. The Halloween soirée has become something of a sought-after ticket in the fan community and after 2017’s New Year’s Eve party it is clear that this will become a regular fixture in a fan’s diary.

The main fixture of the evening was the parade that kick-started the evening at 20:30. This parade lasted over one hour and included over 40 parade units and more than 100 dancers. The soundtrack brought back many delightful memories for Disneyland Paris fans as the music featured: Everyday’s a Celebration; Magic Everywhere; Just like we dreamed it; All around the world and Dancin’ A Catchy Rhythm. Hearing those sounds once again in the park made for an emotional experience full of nostalgia – a truly perfect way to end the year in which Disneyland Paris hit the milestone of 25 years old. 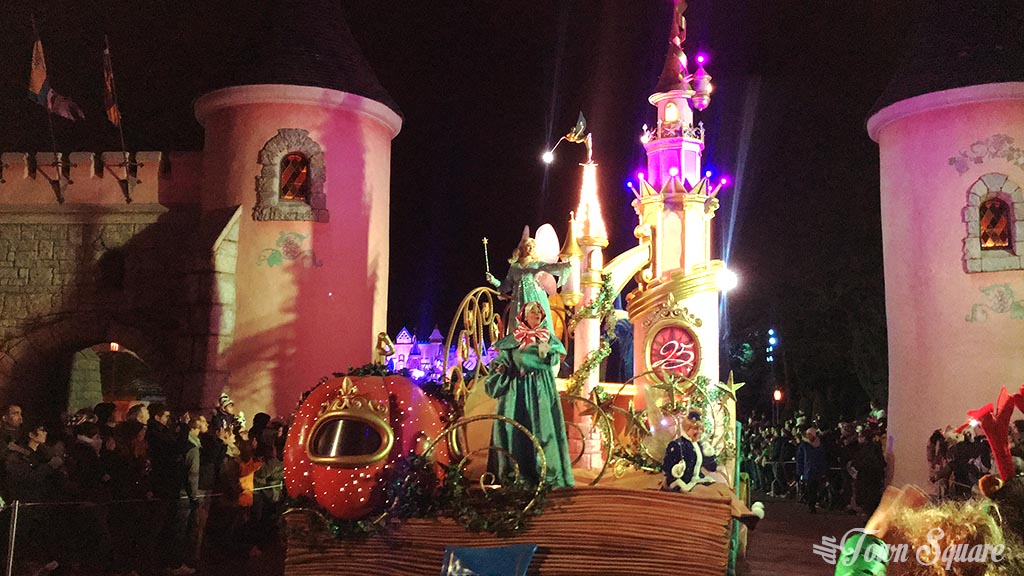 The parade being made up of floats from previous parades (although most notably from Disney Magic On Parade) allowed a new dimension to the festivities, it may only have been 9 months but it was wonderful to see these colourful and fun floats once again. It was also rather special, in this 25th anniversary year, to see the Halloween floats (which have only been used on the 31st October this year). The number of characters (both rare and normal) was wonderful to see and brought delight to the faces of both young and old. 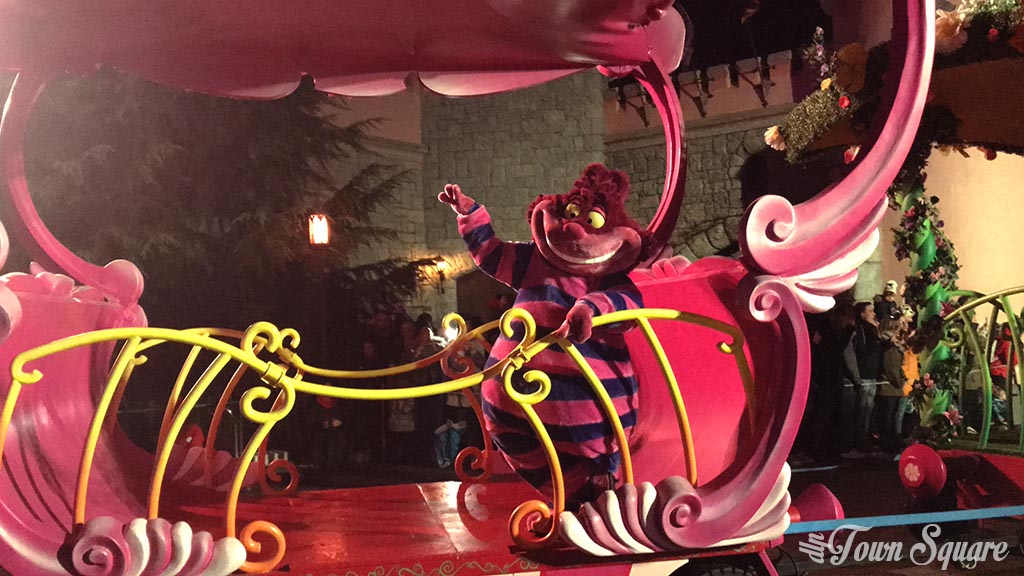 A parade of this magnitude added to the occasion and really did feel like something truly special; we can only hope that future New Year’s parades keep up this level of amazement.

Central to any hard ticket event is having a wide range of meet and greets. The New Year’s Eve party made sure that there was some to be had featuring both rare characters and meet and greets in unusual spaces. The highlight was, of course, being able to meet Louis the alligator (for one night only). Queues for this meet and greet very quickly increased into some of the longest of the night, but Louis himself was excellent fun and worth the wait. 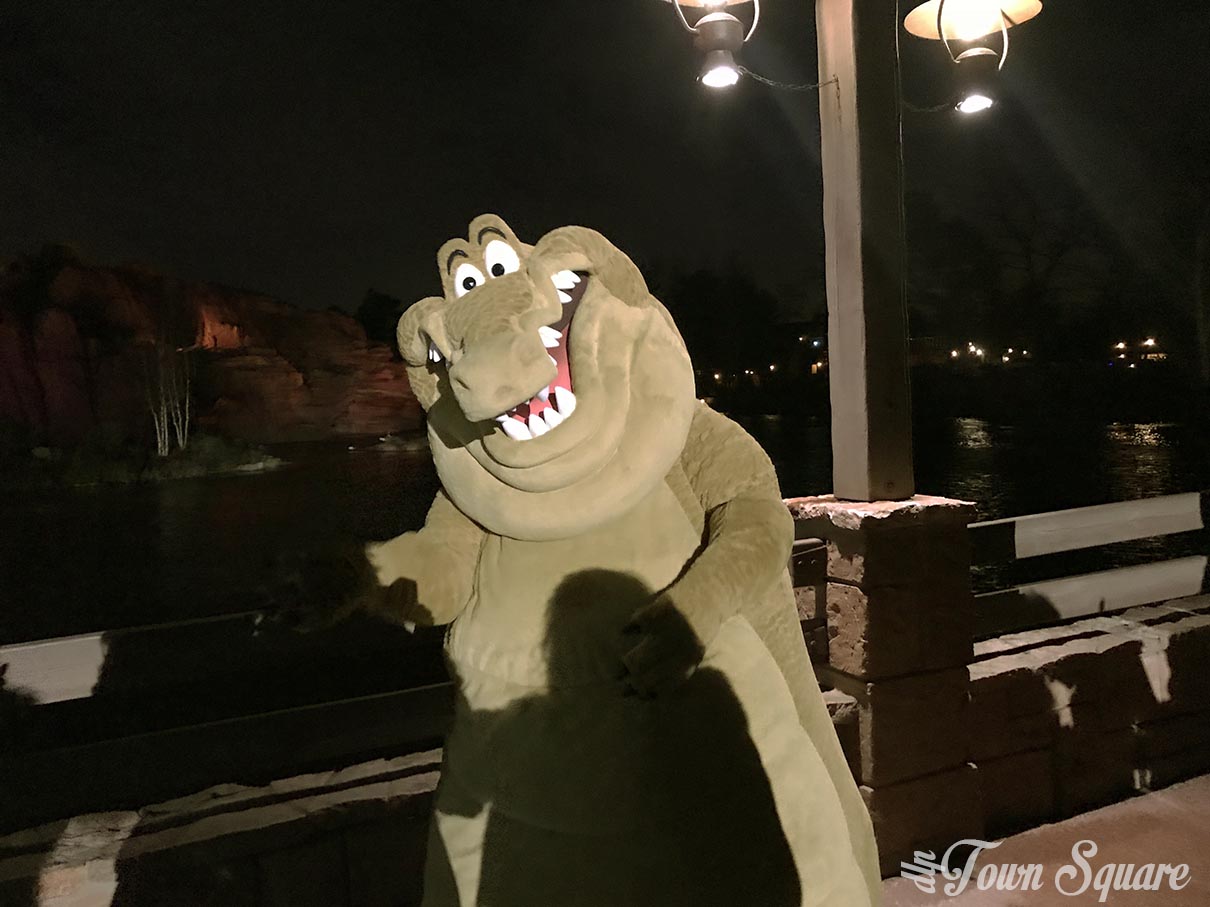 Other meets included Chewbacca; Jake the pirate; Genie; Tiana and Naveen; Donald and Daisy (in special New Year’s gold outfits) as well as some of the regular meets such as Darth Vader. All of these looked busy, but fun. One thing that was striking in it being missing was no meet and greet with Mickey Mouse anywhere in the park. Of course, we can meet Mickey daily, but a Disney party without Mickey doesn’t quite feel right.

As midnight struck and Disneyland Paris entered 2018, a spectacular fireworks display was held over Sleeping Beauty Castle set to the music that we have come to know and love from The Grand Celebration (April 12th 2017). The fireworks were reminiscent of night-time spectaculars of old at Disneyland Paris and provided a joyous and festive start to the new year. This was a firework show never to forget! 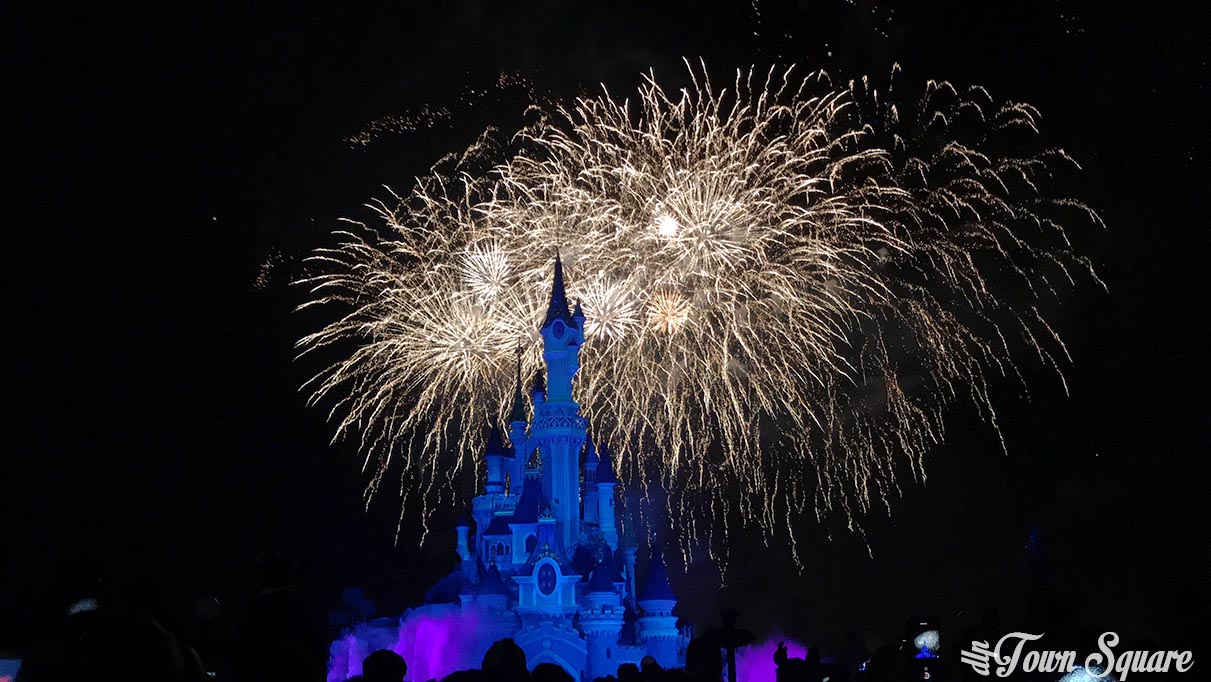 Throughout the entire evening a dance party was held in Discoveryland hosted by DJ Goofy. On the menu were top songs from across the decades providing something for absolutely everybody. The party area itself was quite small and could have been a little bit bigger especially after midnight as it became increasingly popular. A champagne station was provided to help guests celebrate. The song choices were overall very good and were singable and danceable classics. This party was really rocking after midnight and so an extra hour would have been perfect! 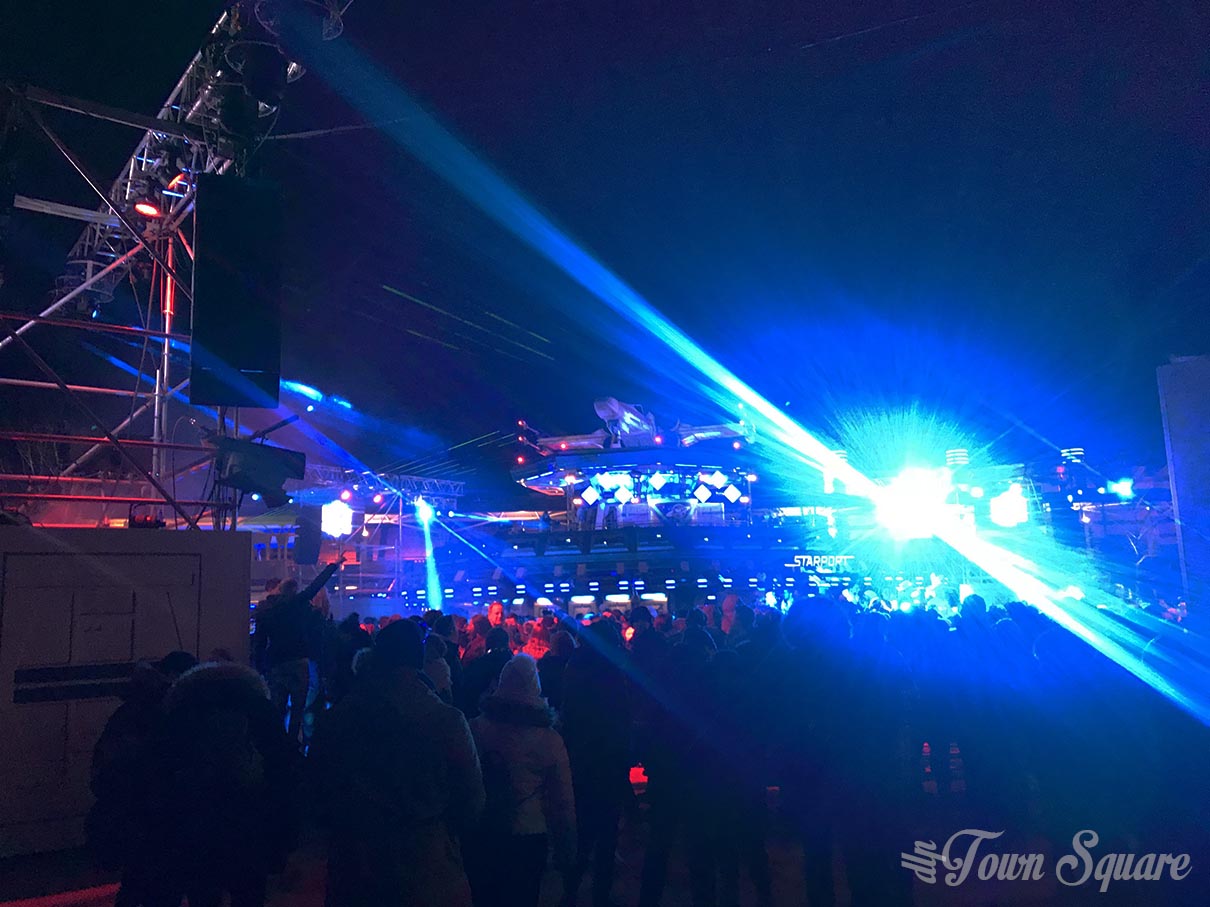 Disneyland Paris laid on a number of Champagne stations throughout the evening that offered a glass of champagne for €10, a non-alcoholic children’s cocktail was also on sale in a souvenir glass for €10. The bars were cash-only and glasses were being prepared constantly meaning the queue was fluid and fast. The champagne itself was of a good quality and in plentiful supply throughout the evening. 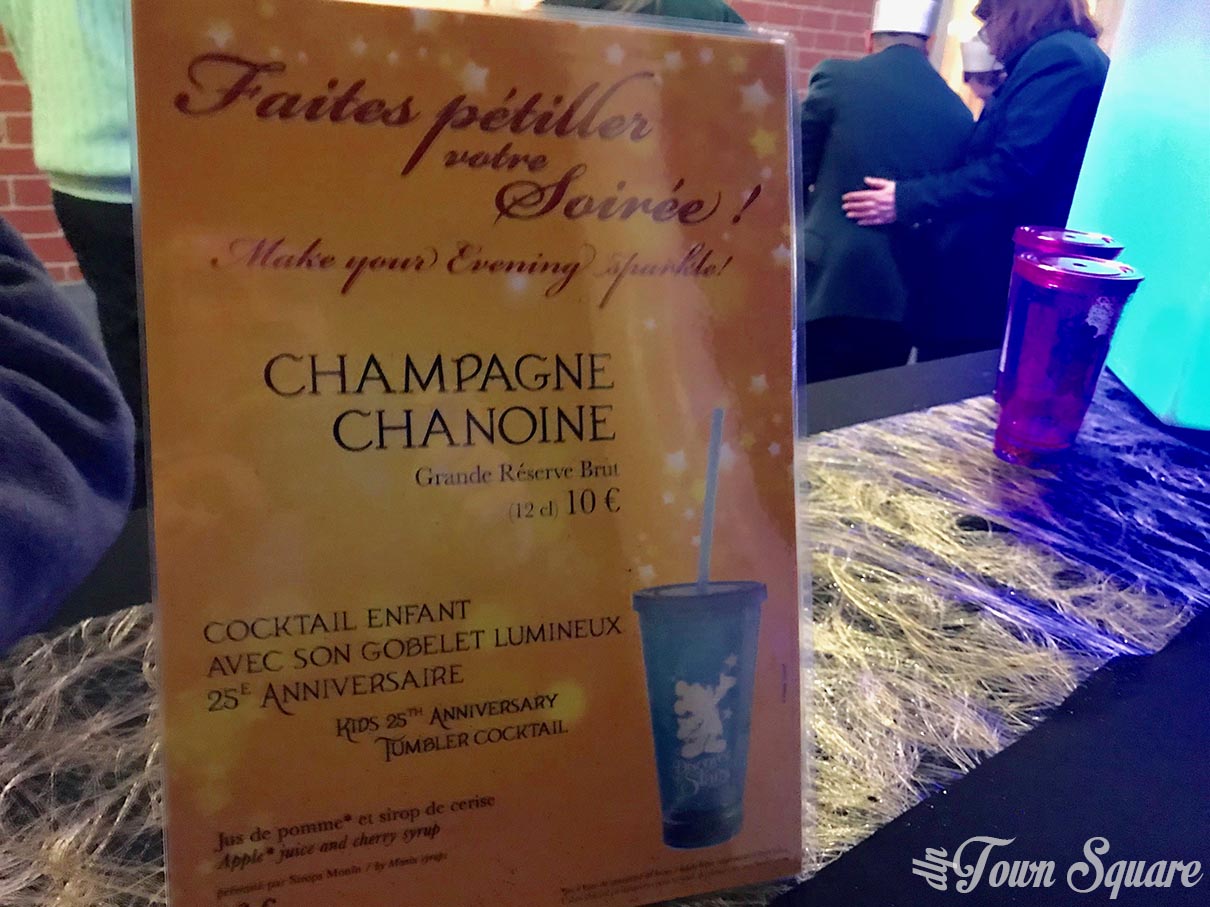 Around special events such as New Year’s (and Halloween), the atmosphere in the park can be electric. For New Year’s Eve 2017/18, the atmosphere was one of excitement. The parade really set the tone for the special night and from then on in it just built and built leading up to the midnight hour. Whilst after midnight the park emptied (dramatically quickly), the atmosphere remained at places such as Central Plaza where Cast Members lead a Disney dance, or in Discoveryland for the dance party. The music loop being a mix of upbeat Disney songs really did help, however in places it was quite quiet, at a party a louder soundtrack is more welcome!

Whilst the party was a strong success for Disneyland Paris, it is always useful to evaluate and see what could be done better. Nothing is perfect and there are ways to improve just about everything. The comments here are small, but would be helpful for future years: 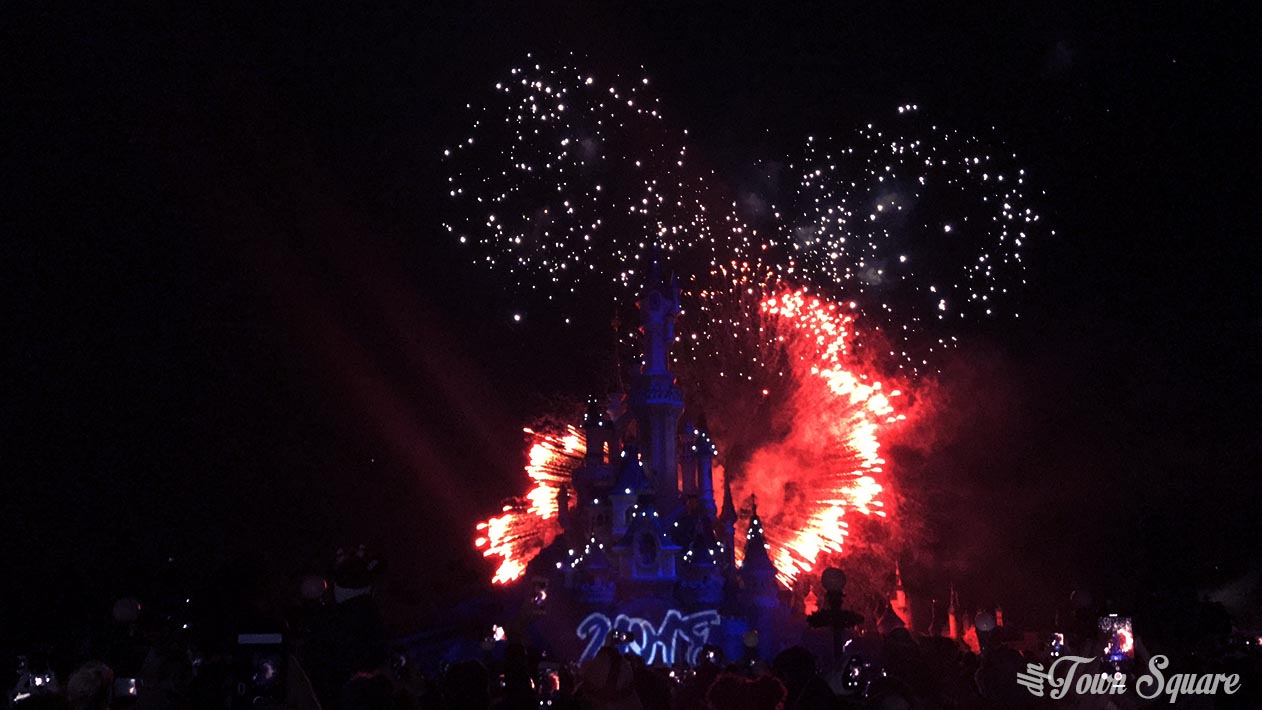 A wonderful evening that has become a yearly ‘must-do’

New Year’s Eve was a truly wonderful night that has entered the Disneyland Paris yearly calendar very strongly. In fact I’m already planning to be there later in the year for this special party and friends who I spent the night with all said the same. The atmosphere was electric and the entertainment was top class. Let’s hope for the same next year. 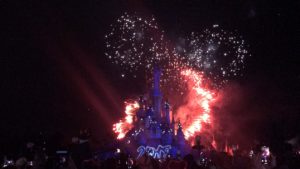 On the 31st December 2017, Disneyland Paris held its first ever New Year’s Eve special ticket event. The evening promised entertainment in the form of