This week, as we hit April 12th 2022, Disneyland Paris reached its official 30th anniversary day. The day was set up with much anticipation by the fan community given the festivities for the 25th anniversary just five years ago. Whilst the 30th was not destined to be as grand, it was still due to be special.

As we arrived at the park (and navigated the mess that was the queue for entry – the only negative in an overwhelmingly positive day!), all guests were greeted with a very special edition park map and a flag.

The park map held a fantastic surprise upon opening – the original 1992 map, which then folded out to reveal the 2022 map. Around the map were a few facts about the history and heritage of Disneyland Paris. For fans, this little hidden detail was a small joy and something I will cherish.

A flag was also given to all guests saying “I was there”, something that would become very useful as we walked onto Main Street U.S.A. Here, un monde qui s’illumine was blasting out and hundreds (potentially thousands!) of Disneyland Paris Cast Members greeted us in a wall of sound, smiles and joy. The walk down Main Street U.S.A. is something very special and something that I will never forget – and it continued for around an hour-and-a-half. It was so captivating that after having walked down Main Street once, you went back to the beginning to do it all over again!

The highlight of the day was, of course, the special panel organised by the InsidEars team. Celebrating 30 Years of Disneyland Paris with the Imagineers was something the like we’ve not seen before and feels unlikely that we ever will again. Many of the leading figures who created Disneyland Paris reunited on stage including Tony Baxter, Tom Morris, Tim Delaney, Sylvie Massara, Tracy Eck, Bjorn Heerwagen, Beth Clapperton, Tom Fitzgerald and David Wilson. Simply being in the room for this fantastic event was an honour and privilege.

Hearing all the stories of the creation of the park directly from these heroes was captivating and something I never thought I would be in the room for. I was immensely grateful for the invitation and this will probably become one of my most cherished memories as a Disneyland Paris fan.

But that was not all. I was then very fortunate to be able to meet Tom Morris and Tracy Eck. This experience to share a moment and exchange a few words with the creator of the Château de la Belle au Bois Dormant (Tom Morris), and the Imagineer in charge of refurbishing it recently (Tracy Eck) was another pinch me type moment.

What makes these events so special?

April 12th on the big anniversary years are so incredibly special, the resort puts on all sorts of special activities and events and we enjoy attending them and leave with life-long memories. But it is the people we meet and spend time with that are so incredibly special, even if we only chat for 20-30 seconds those moments are so meaningful and make the day that much more special. Disney fans are some of the best people you’ll ever meet.

I’d like to thank the Disneyland Paris InsidEars team for the invite to the 30 Years with the Imagineers conference and to a special roundtable discussion with Natacha Rafalski. Both were events that I don’t think I will ever forget and will cherish the memories. 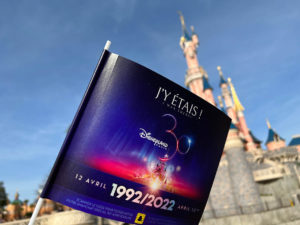 This week, as we hit April 12th 2022, Disneyland Paris reached its official 30th anniversary day. The day was set up with much anticipation by