The Marvel Summer of Super Heroes took place in Summer 2018 for the very first time, the results were generally mixed – it was a good start but much more work was needed in order to make it a full season. Fast-forward to March 2019 and the super heroes have landed back in Disneyland Paris, but is the season a much more solid offering? Yes, is the short answer.

The big surprise of 2019 is that the Stark Expo show has been completely reworked – nothing about last year’s show has returned and the show is much better for it; Stark Expo has become the hit of the season.

The opening tone of the show is something of a futuristic celebration with a modern dance number that had me awestruck at just how good it was. We then meet some of the Marvel Super Heroes and villains including the Redskull who makes his Disney Parks debut here.

Away from the main story issues, which have been completely ironed out, subtle improvements are all over the show: Spider-Man jumping down the vent to get to the stage now plays with sound effects across the plaza. It’s these small changes and attention to detail that really do make all the difference.

Another huge addition to this show is the inclusion of new recruit Captain Marvel. Carol Danvers appears at the opposite end of the plaza to the main show, and then runs through the audience to fight the bad guys. This effect works amazingly well and is a fitting moment for this particular character.

Stark Expo presents: Energy for tomorrow! has become my favourite show of the season and something I am looking forward to enjoying again.

During the 2018 season, this show constantly struggled with technical issues. This year, modifications have taken place with the aim to alleviate these issues but also to add new effects to enjoy throughout the season.

The lighting has been completely redesigned by Tim Lutkin (Mickey and the Magician), this looks magnificent and is striking from the very first second; show lighting is very easy to underestimate, but this show has benefited enormously from this re-working and it is evident in every part of the show.

A few elements of the show have been reworked, mainly in the sake of plot clarity or technical reasons, these work well over the show – such as Thanos now just speaking the one language, or the drone elements being re-worked – but don’t really add too much.

One of the criticisms of the show last year was the fight scene being overly long, this year the duration of the scene does not seem to have changed, but each hero is given some time in the spotlight which allows you to really take in each hero individually on their own merits.

The plot of the show is still very loose, but the changes do feel significant. Overall, it’s a solid show but this year Stark Expo is still the one to watch!

Guardians of the Galaxy: Awesome Dance off

Perhaps the most fun show of the season, the Guardians of the Galaxy: Awesome Dance Off is about 20 minutes of pure joy with Star lord, Gamora, and new for 2019, Groot. Not much has changed here – after all, why change a winning formula? But this is still packed full of great music and fantastic interactions.

Whilst Groot adds very little to the plot, it is still extremely exciting to see him on stage in the park, he is a worthy addition to the show and is very impressive when he first arrives on stage.

There are a couple of new songs including Hooked on a Feeling and Father and Son. All work well during the course of the show and extend the running time just a little bit more.

This year there are 3 character meet and greet locations for Marvel characters: these are Spider-Man, Captain America and Captain Marvel. The season needed much more of this and it is pleasing to say that we have it and with good meet and greet sets to match – Spider-Man especially has a fantastic meets place in front of two New York taxis (including the taxi from Disney’s Hotel New York).

These meets are fantastic, all have Disney’s PhotoPass but can have long queues! Let’s hope for even more next year!

Perhaps the strongest part of the 2018 Summer of Super Heroes was the snacks. The good news? Not only are the very best snacks making a return, this is being topped up with even more snacks.- many of them also looking fantastic.

The standout of the year is the Guardians of the Galaxy: Awesome Mix Tape chocolate cake. This thing is perfect for your instagram photos, but also tastes pretty good too.

A veggie Falafel option is also on the menu as well as a special Chilli dish.

In En Coulisse, a special Captain Marvel menu is on offer with a spicy California inspired burger with Doritos inside – something that adds a nice crunch to the meal and the spice makes a nice difference to other resort burgers. The desert of a passionfruit pavlova is another good choice, after a heavy burger the light desert is very welcome.

A much more well-rounded season

Overall, the Marvel Season of Super Heroes has taken a real step-up and is a much more solid offering. Every element of the season has been given an upgrade and instead of a season that left guests feeling indifferent towards the Marvel offerings, this one leaves guests happy and excited.

Most remarkably, the Stark Expo show has left me wanting to see much more of that particular show, one that understands its characters and does not hesitate to play with them in a, quite frankly, brilliant way. 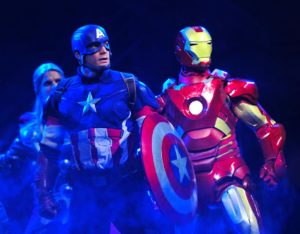