How many times have you visited social media and have found discussions on the idea of changing trains at Lille? The answer is probably a few times; even if you haven’t heard of it before, perhaps you should look into it. Lille is a large city located on the French and Belgian border, and is the main city in the new Hauts-de-France region (Which comprises of the old Nord-Pas-de-Calais and Picardie regions). The city has a deep and historical past – and the best part is, you don’t have to venture far from the Lille-Europe train station to find it!

The city of Lille was once known for its cotton production, this was aided by Napoleon I’s blockade against the United Kingdom. It would later become known as the birthplace of a certain Charles de Gaulle, who would become the leader of the French resistance and later the President of France. The city was extremely damaged during the Great War and the Second World War. After the war, Lille became the main city in the North-East of France thanks to the coal industry. Now, Lille is a cosmopolitan centre located within easy reach of three European capitals (Paris, London and Brussels). 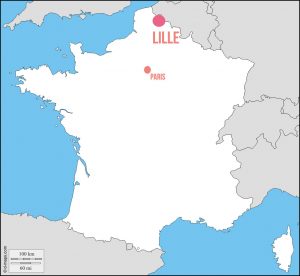 Lille is served by two major train stations: Lille Europe and Lille Flandres, the two are located within walking distance of each other. Lesser used is the Lille-Lesquin airport but it connects Lille to a number of European cities. The city is also on a major interchange in the French autoroute network:

Chances are that if you visit Disneyland Paris on a regular basis, you have passed close to Lille or through the city’s various interchanges.

Lille is well served by a rapid transit underground rail system, which is priced very modestly.

What to see and do?

The Place du Théâtre is the centre of the city, and is located within easy walking distance of the two main train stations. Here you will find the Bellfroi – a clock tower – which is in the traditional Flandrian style of the area. This tower is connected to the city’s Chamber of Commerce. Just next door to this is situated the Opéra de Lille where you can take in a show on most evenings. Tickets are available of the website of the Opéra de Lille, which is also available in English. Directly opposite is the Vieille Bourse. This is surrounded by restaurants and shops. The Vieille Bourse frequently hosts a market specialising in a range of goods. Behind the Vieille Bourse is the Place du Général de Gaulle, here you can find the biggest bookstore in Europe – La Furet du Nord – you can also find DVDs and Games here, there is also an extensive English selection. As you can imagine, this leads on to Lille’s commercial and shopping centre where you can find national and international brands.

For those wanting to explore their cultural side, the Orchestre national de Lille is within walking distance and offers a range of concerts including the classical recitals and new ciné-concerts. Lille also boasts the Palais des Beaux Arts where there is a range of masterpieces on show.

History buffs will enjoy walking around the Vieux Lille area with its wonderful boutique shops and restaurants. It is here that you will also find the beautiful Notre-Dame de la Treille cathedral. Whilst in the Vieux Lille area, the Citadelle de Lille which is worth exploring for anybody interested in historical fortresses.

This is but an introduction to the activities that can be experienced in Lille, for a full guide, make sure you visit the Lille Tourist Office website.

The end of boring transfers?

The transfer does not have to be a boring sit in the station and have a coffee affair. There are plenty of coffee shops in a beautiful environment just minutes away from the stations. And if all else fails, the Euralille shopping centre across the road from the Lille-Europe station offers a range of fast-food options, coffee shops, high-street stores and a supermarket to stock up on essential supplies before arriving in Disneyland Paris.

Did you enjoy this article? Do let me know either in the comments below, or on my social media outlets. If popular, I will write more excursion guides in the future.

How many times have you visited social media and have found discussions on the idea of changing trains at Lille? The answer is probably a