Despite Disneyland Paris fans talking about Light’Ears for about a year, it takes a bit more work for the general public and Disneyland Paris guests to understand the concept of the product they are being asked to buy. Add to that the European guests buying habits and perhaps you have a recipe for disaster? We already know that in the past Disney have got it very wrong with the European consumers, the way we consume and buy is quite different to that of the American market. Happily, Disney have learnt from mistakes made at Euro Disneyland and moved on to create a Hong Kong Disneyland that takes into account the cultural habits of the people of Hong Kong, and indeed they will be certain to do the same in Shanghai for the upcoming Shanghai Disney Resort, in this regard, Disneyland Paris’s original failures have improved the future for all resorts. The perfect example of getting European consumers wrong was the original policy of having no alcohol in the park (thus matching the parks American cousins), Europeans did not agree to this policy as alcohol is a larger part of European culture and so Euro Disney management reversed the decision and alcohol was served in Disneyland Paris. Having said that, there is no real evidence that Light’Ears would be a failure in Disneyland Paris, and in our opinion they are not a failure; however there is no real success story either. We’ve taken thoughts from you, our readers, and taken our own observations to analyse Light’Ears in Europe (and to some extent Glow with the Show in Disneyland Resort in California).
Point 1: Marketing and Sales

There is no nice way of putting this I’m afraid. Light’Ear marketing is poor, very poor. In fact we are glad we knew what Light’Ears were and how they interacted with Disney Dreams! As there was no real mention to it in the promotional material given in the parks. We visited every hotel in the main resort area and every shop

in Disney Village and Disneyland Park to study the marketing and it really was shoddy. Essentially what we are told in the shop displays are that these are Light’Ears and that they are €20. Nothing more. Which, as a Disney fan is quite disappointing; we’ve all seen the press event videos presented to us by various Disney fansites, and Disneyland Paris themselves and have seen them as an amazing piece of technology that really could change the way we view Disney Dreams! forever. However, that potential will not be realised due to, in part, Disneyland Paris not telling guests what they do.On the face of it, during the daytime, these ears are a garish colour bonnet with white ears. It is only at night where these lights come into a life of their own. The problem is, Disneyland Paris have not advertised this during the daytime hours. 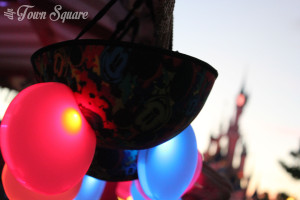