Too many green fences, attractions I really love closed for a year and the prospect of a lacklustre year at Disneyland Paris. I’ll admit, I was put off a little bit. It is not that I didn’t want to visit Disneyland Paris this year, I did. It is simply that I thought I’d hold off and go all out in 2017. How wrong was I? I had what was probably my favourite Disneyland Paris trip yet.

Come fly with me!

First new feature of this trip. Flying. I usually take the Eurostar to Disneyland Paris, but the last minute nature of this trip made this difficult. I hopped onto the easyJet website and found a very cheap return flight. I am not a fan of flying and so this to me was a more stressful route and not one I really wanted to take.

The check in process online was very simple and I downloaded the boarding passes onto my iPhone meaning I didn’t need to worry about losing pieces of paper. The whole thing was simple really. The waiting area after security at Luton airport was a mess and there was quite simply nowhere without a very long queue to get a little pastry and hot chocolate to set me up for the morning ahead.

Heading to the gate, the flying nerves set in. I cannot fault the easyJet staff, they were fantastic and very friendly. We had to wait a long while on getting clearance to take off. We entered the runway and my heart started pounding. Turns out, flying is a doddle. 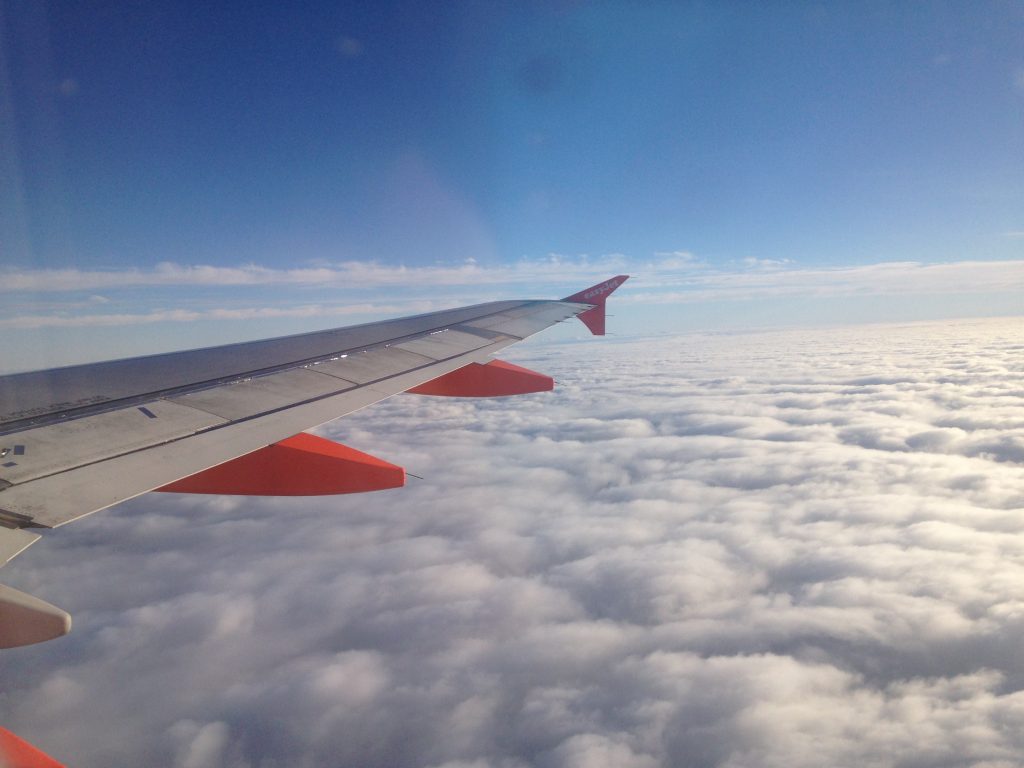 Arriving at Paris Charles de Gaulle, getting to Disneyland Paris is quite easy. I took the time after my flight to calm down and had a drink in a cafe. I then made my way to the Magic Shuttle bus stop which is situated in between Terminal 2E and F.

We’ve all seen the airport busses doing the rounds of the hotels at Disneyland Paris, this was my first time to actually try them. I pre-booked the bus and claimed a very slight discount. Boarding was simple and I was helped by a friendly driver to put my luggage in the hold. And we were on our way. The total journey time is around 30 minutes from the airport to the resort, but depending on your hotel you can add another 30 minutes on to this time doing the rounds of the various Disney hotels.

The shuttle is easy, comfortable and features free wifi. I very much enjoyed looking at the French scenery as we travelled and found the whole thing relaxing and agreeable. The major plus on the bus versus the TGV was, for me, the security of the bus being on time and having a bit more time to settle down and relax after a busy morning of travelling. A 10 minute train journey is fantastic, but the bus gives you that little extra time to catch your breath and be ready for Disney when you arrive.

If I fly to Disneyland Paris again, you can be sure that I’ll be taking the bus.

Having taken a 6am flight from London and a relaxing morning once landed in Paris, I arrived at Disneyland Paris at around 11am. I placed by bags in the concierge and got ready for an exciting day ahead. After having sorted out various formalities, I headed straight for lunch in Hakuna Matata. After this, I was all chilled out and ready to begin my day.

I have always been a guy who sees the Disney experience as being a bit of everything: rides, food, shows and characters. Although, traveling alone I tend to judge my character meetings by if somebody was close by to take the photo. This time, however, I opted to place a higher focus on character meeting and not worry about my camera – the worst that would happen is that I’d have to take a selfie. I checked Twitter and saw that Belle and Human Beast were having a meet and greet. This naturally excited me so I ran over, and joined the queue. 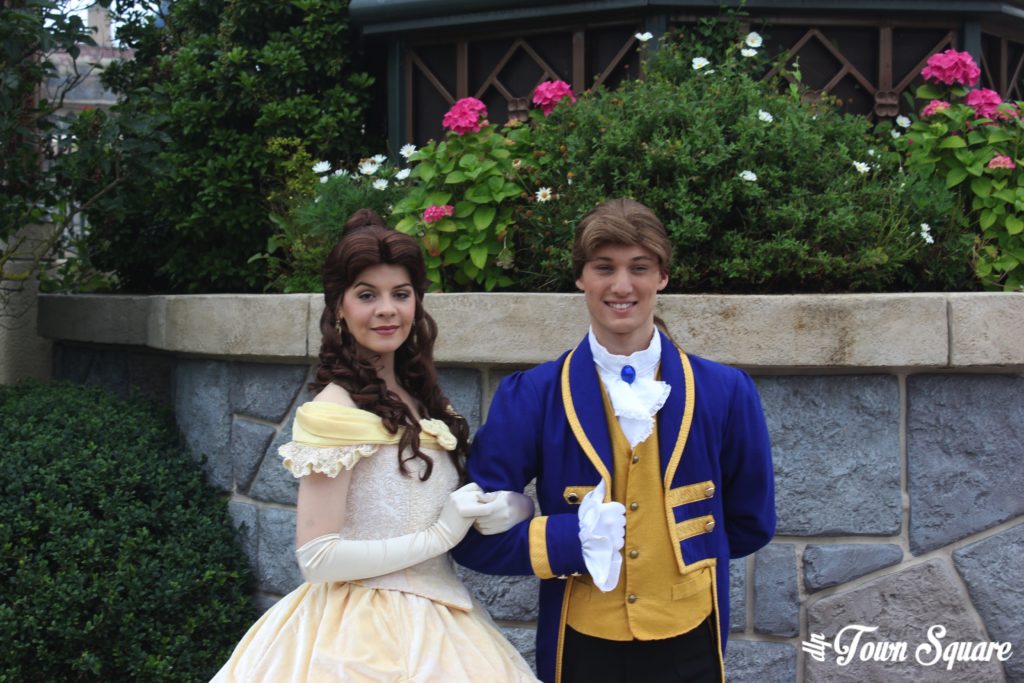 In the days prior to my trip, one of my followers (and now friends) sent me a message on Twitter and asked to meet. I always enjoy meeting people in Disneyland Paris, especially fans. It’s a great opportunity to see people in person and geek out and have a fun time – something that is usually difficult to do. We met and had a quick drink in the Walt Disney Studios park before he went to enjoy his annual passholder Mickey and the Magician showing. I went and did Ratatouille and took a general walk through both parks before heading to the new Disney-Pixar Short Film Festival.

This new festival is an enjoyable little experience where you will be able to see some old favourites in a brand new way. The highlight was the first film Get a Horse but the entire show was an enjoyable way to pass half an hour.

After this, I was exhausted so went and bought a McDonald’s and went back to my hotel in order to get some sleep. Tomorrow was to be a big day.

I woke up bright and early, had a breakfast in my hotel and left for Disneyland Paris. This was not to be any ordinary day, I would be attending the Mickey and the Magician press event. Arriving at the resort, I quickly went to the Hotel Newport Bay Club and checked in to my room at 10am. My room was fantastic, and I have already written a review of it here on the website. Having quickly settled in and had a look round, I ran to Disneyland Park to begin my day. I did a very quick meet with Jafar and Genie and then went to ride Pirates of the Caribbean. 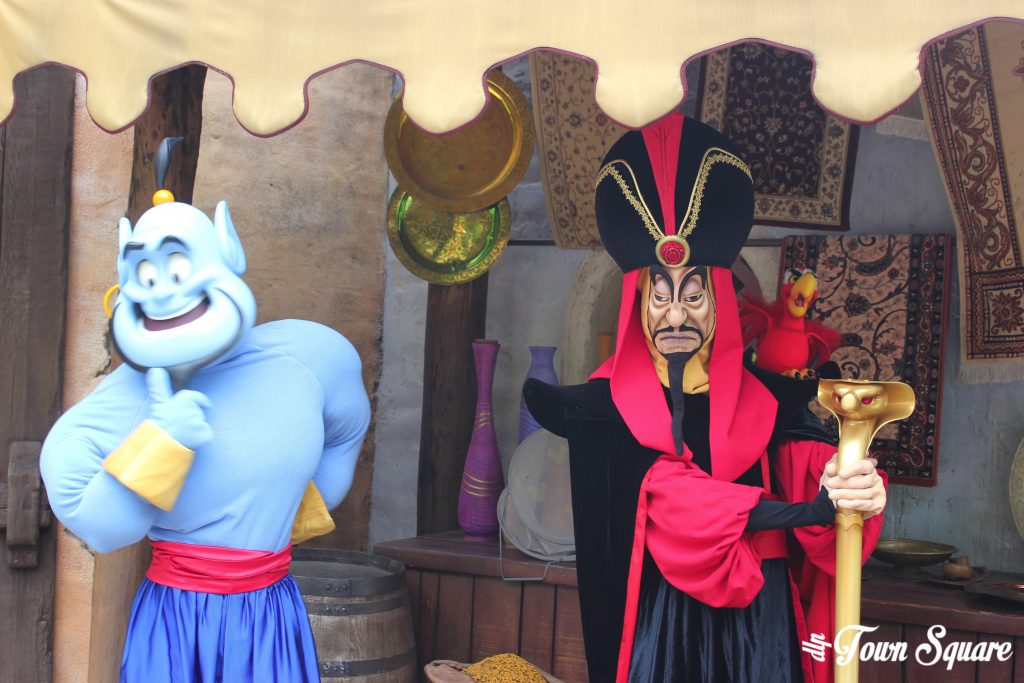 With 10 minutes until lunch at the hotel, I started to run the entire length of the resort and made it (even though I was 2-3 minutes late). Having lunch with plenty of Disneyland Paris fan bloggers at the Yacht Club was a delightful experience. The food was of a very good quality and the conversation was alive on a wide range of subjects – and not just Disneyland Paris!

Having finished dinner, it was time for our first viewing of the day of the show Mickey and the Magician. The show was exceptional, and you can read my thoughts elsewhere on the website. After the show, and standing around in a daze of amazement for a good 10 minutes, it was time to enjoy some rides with some of my fellow Disneyland Paris fans. We managed to do Tower of Terror and Ratatouille and still have time to have a coffee stop before the next big stop on the agenda

The Mickey and the Magician roundtable discussion. This was a genuine honour to be a part of. Whilst you can read my write-up of this wonderful presentation in its own article, I will describe my thoughts and feelings here. So, walking into the Art of Animation building, the first thing that struck me is how quiet it was. Gone were the usual sound effects and music. It was silent. But the overall impression I had whilst waiting for the presentation to start was how lucky I was to be in that position. What I was doing would be a dream for many people, and that I’d hope to do it justice when I returned home and created an article.

Hearing imagineers and show designers speak about a passion project is a joy and a pleasure. Hearing the thought process behind creating this large-scale show was a fantastic experience. As this event finished, we would head back to the Animagique Theatre to watch the show again.

After this showing, we were due to head to Moteurs… Action in order to enjoy a midsummer party. But the heavens had decided to open meaning we were waiting. Eventually, however the rain ended and we were good to go.

This event was fantastic. We headed to our table on the stage area, which was unique in itself. This entire event was to be held on the show stage. We arrived to find a very wet table. Waiting for a way to dry out our chairs we started to tip rain water out of our wine glasses and draining our napkins. Once this was done, we started to help ourselves from the buffet dinner. The choice was good, and the quality very high. 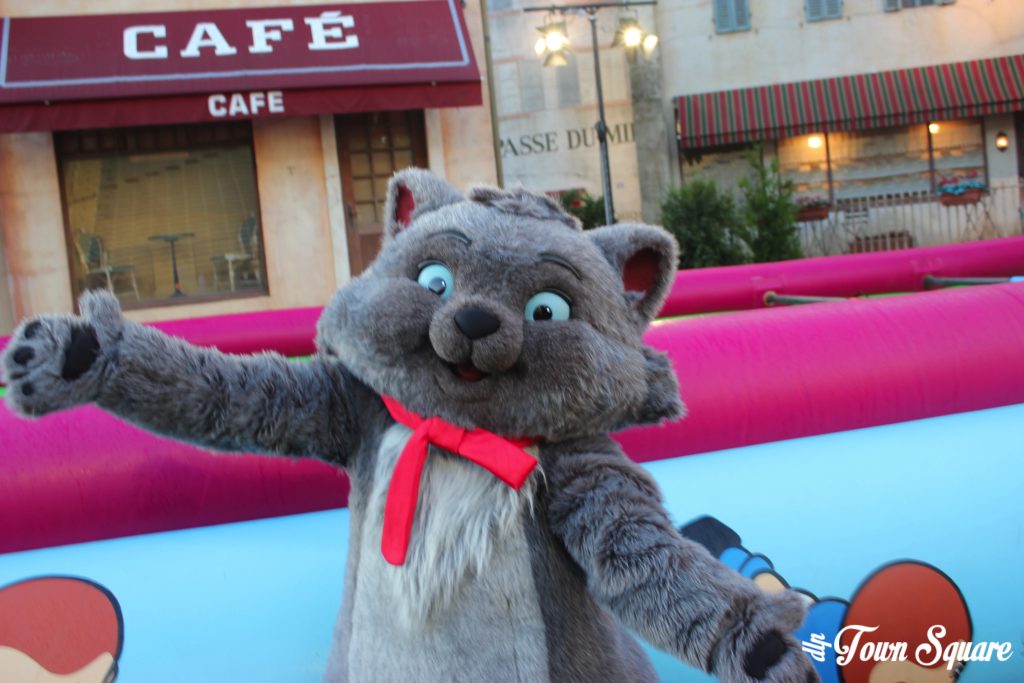 The music was from a very skillful acapella group as well as the standard DJ hits. Disney characters were in plentiful supply as was the ice cream.

The evening ended at around 12:00 and we headed back to the hotel to rest up for another day.

My final day in the parks for this short and unexpected trip. I had a late breakfast at 9am in the Yacht Club. The Disney breakfast was of a good quality and set me up beautifully for the day ahead – and helped me recover from the previous day.

I entered the park to see a fantastic band playing live music from the hit film Frozen. This was to be a theme of the day as I would be enjoying elements from the Frozen Summer Fun celebration.

The first thing on the agenda was seeing the Frozen Sing-along. I met up again with a fellow Disneyland Paris fan, Krisoff from Photos Magiques, to see the show. I really enjoyed it, it did exactly what it needed to do and was enjoyable. I hope to be able to see it again someday. 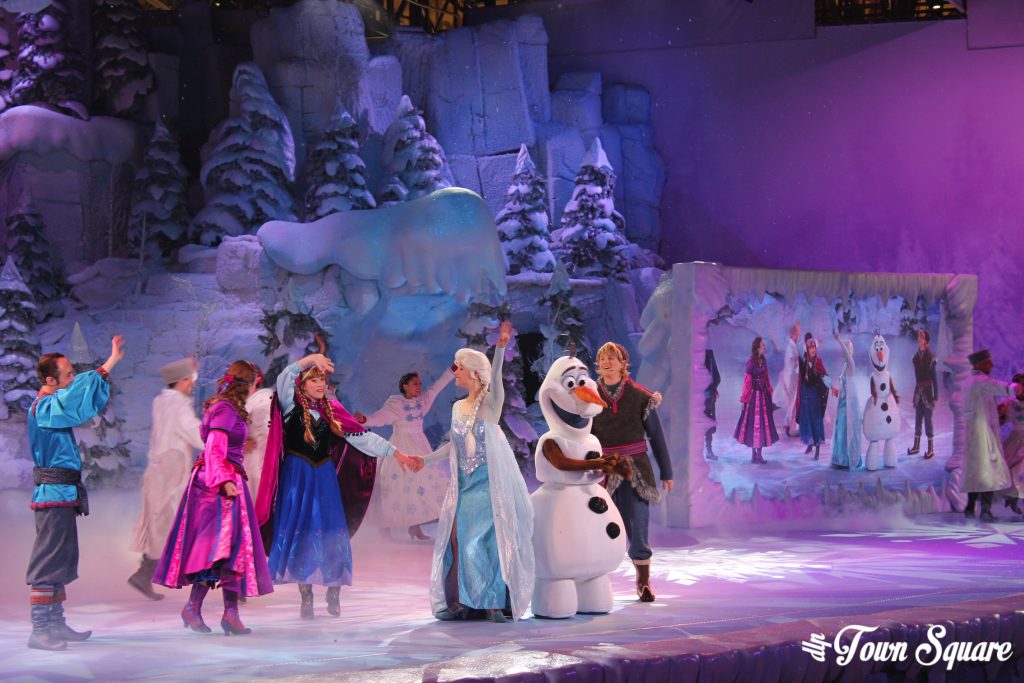 After lunch, it was my time to try the now infamous Pineapple Whip, which I very much enjoyed before heading to see Mickey and the Magician again with a new friend.

Approaching my final few hours in the park, I rushed around trying to do some of my favourite rides, see some parades and to go and see Mickey Mouse.

Magical Shuttle to the Airport

It was time to go home. I walked back to my hotel to collect my bag and wait for my Magical Shuttle bus. It turned up, the driver asked me which terminal I needed at the airport and we drove off. Some 40 minutes later we arrived at my terminal and all I needed to do was check in and get back on the plane.

I left Disneyland Paris happy and very satisfied with my experiences. For such a short and unexpected trip, I can honestly say that this was one of my favourite trips I’ve ever had. I cannot wait to go back to Disneyland Paris and return to going more frequently as I used to do. 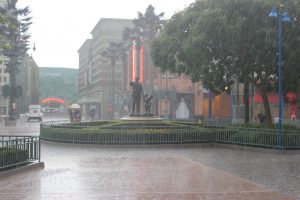 Too many green fences, attractions I really love closed for a year and the prospect of a lacklustre year at Disneyland Paris. I’ll admit, I