With the promise of the most Maleficent Halloween ever, I headed down to Disneyland Paris this weekend to take a look at all that is new in this, the spookiest of seasons. It is reasonably safe to say that over the course of the last three years, Disneyland Paris have massively upped their game when it comes to the Autumnal season after having adopted a ‘Back-to-Basics’ approach in 2011. A tasteful Harvest feel was adopted over the previous reliance on the Pumpkin Men. The 2014 Halloween is quite simply the best yet, I’ve tried to break down my thoughts into categories. So, just what is this year’s version of Halloween really like?

The first thing you see, as with every season at Disneyland Paris these days, is a large banner placed onto Main Street Station. What is striking, for a Disneyland Paris fan perspective, is that this banner is held by train conductor ghosts. This is a theme that runs throughout Main Street USA, and a theme that is pulled off rather well. The ‘Ghosts of Former Residents of Main Street USA’ are placed in a logical fashion above their respective stores. For example, a chef can be seen above Walt’s, a mechanic above Main Street Motors and baseball players above Casey’s Corner. One could question that in an area of the park as immersive as Main Street USA, is further immersion necessary? The answer, in the case, is certainly yes. I had a lot of fun spending some time looking at each ghost and pumpkin. Each lampshade has been given a green or orange tint with some even sporting witches hats. 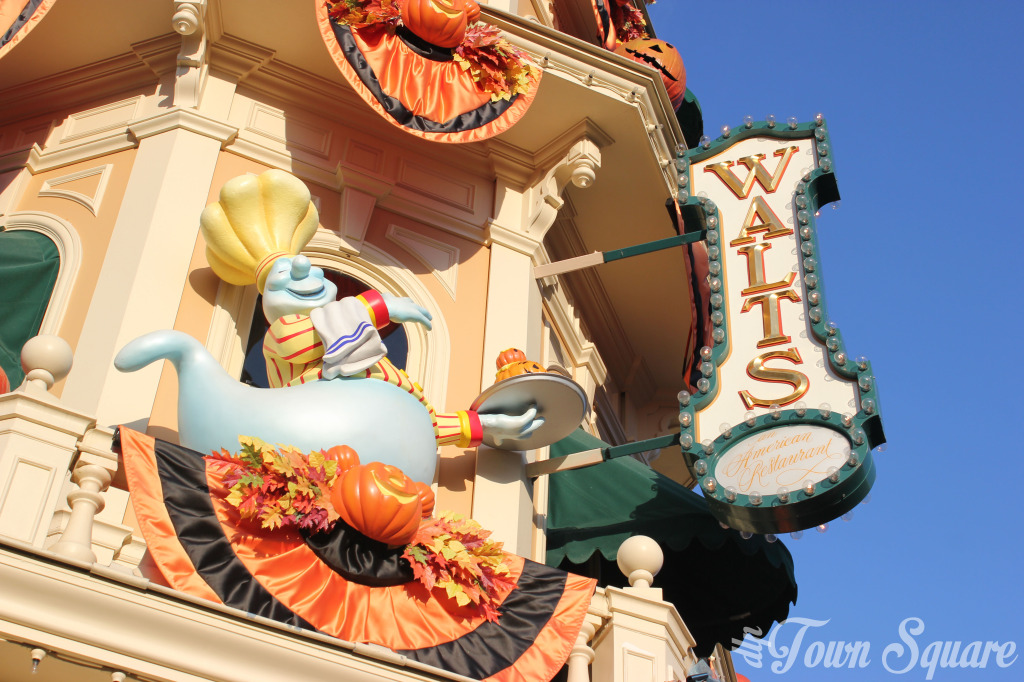 The star of the show though is Town Square. The band stand area looks particularly resplendent with the ghost band as well as beautiful autumnal flower chains and Disney themed lanterns hanging off of them. I’d go as far as to say that I would buy a lantern if they decided to sell me one! The Main Street loop has some minor additions too – noises coming from the ghosts and occasional cackle from the witches. 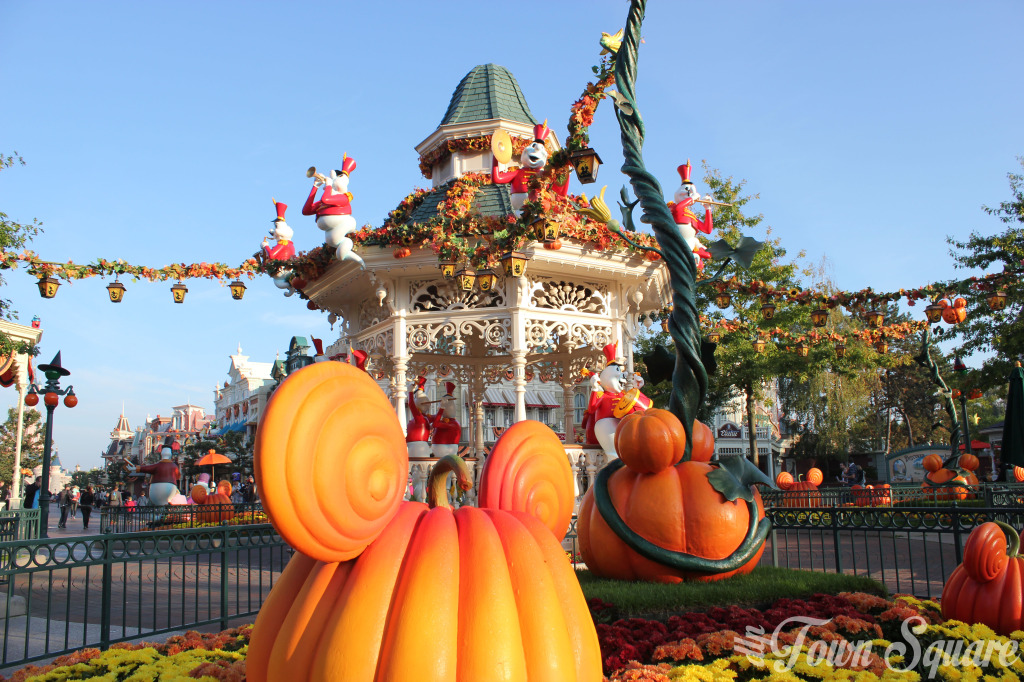 Frontierland has also had a Halloween make-over. Here is feels a joyous mix between ‘spooky’ and Harvest with a slight edge going to Harvest. The bright orange and yellow flowers create a real Autumnal atmosphere (despite the temperature being in the high 20s!). Thunder Mesa looks fantastic with the flowered bunting and pumpkin men fitting with the story of the area. 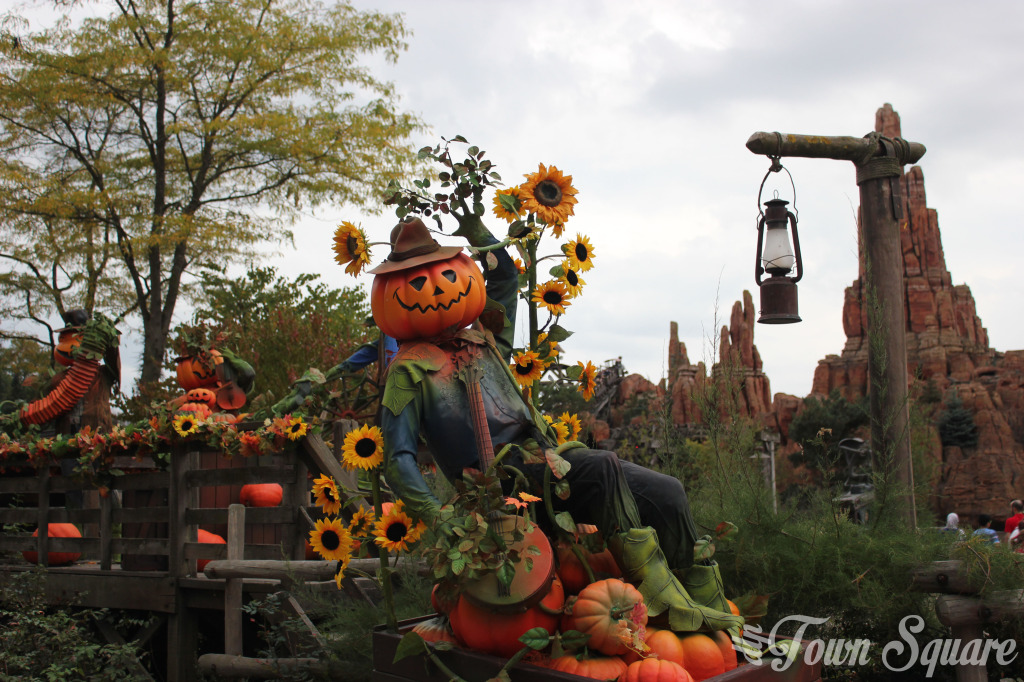 Whilst minimal, Adventureland also joins in on the action. The Coiffre du Capitaine store at the exit of Pirates of the Caribbean has a pirate themed pumpkin exit which looks really fantastic. During my trip this was constantly being crowded around and used as a photo opportunity. 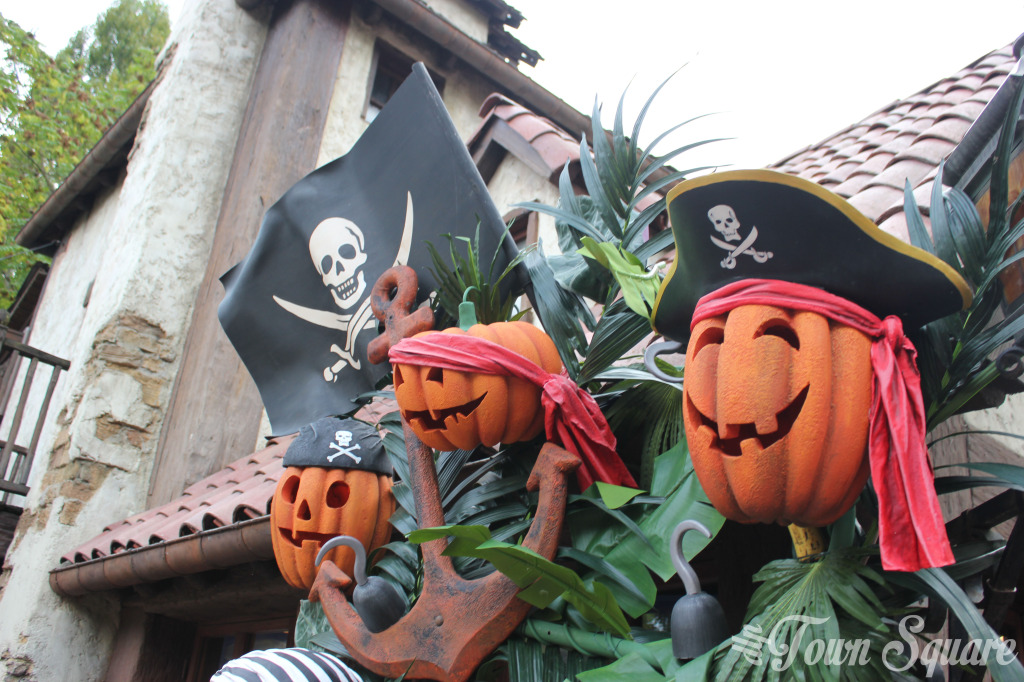 This, for me, was the big negative of the season. Let’s begin with a comical moment: As the announcer announces that the parade is beginning, he pronounces Maleficent as Mal-Efficient in English. This caused me to have a good chuckle; which was good, as what happened next confused and baffled me. It was fantastic to see the Dreams of Power float back in Disneyland Paris. It’s a powerful float that strikes the eye and puts a shiver down your spine. 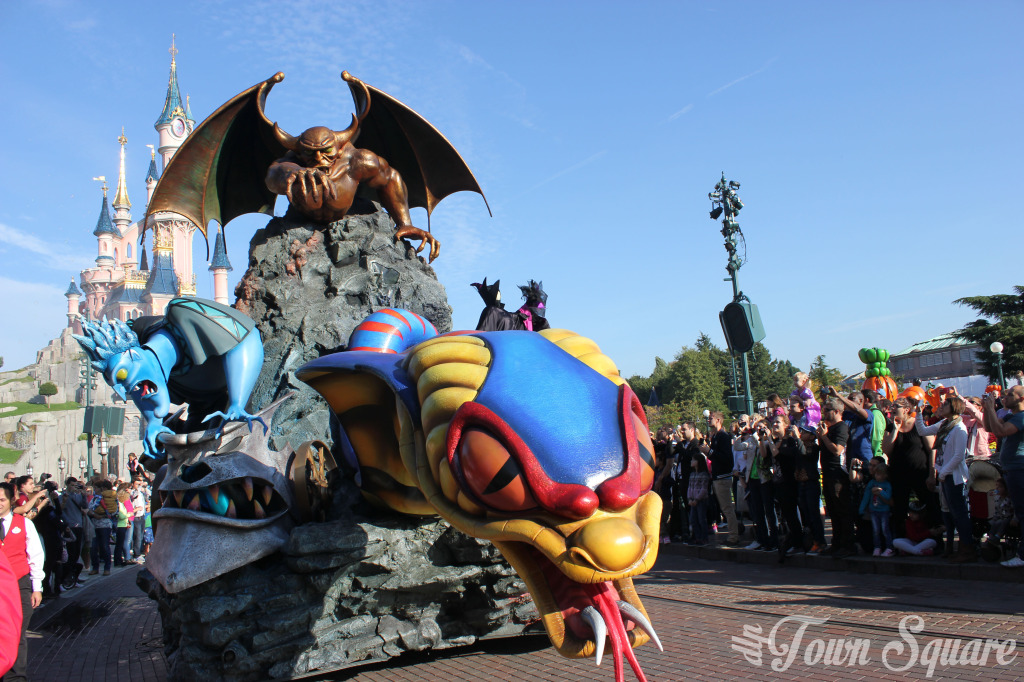 It arrives on Central Plaza after having started in Fantasyland. Maleficent does a spiel about how the villains have taken over Halloween and the castle. The villains emerge from the castle. Take a walk around Central Plaza (at quite a high speed!) and walk off back into Fantasyland. The whole thing lasted about 5 minutes and really left me thinking ‘What was the point?’. Characters don’t interact beyond saying Hello or giving a wave. Life could be given to this idea quite easily after having witnessed what Disneyland Paris did with the Spring Promenade. In this sense, even donning the same name as the Spring Promenade is a deception, let’s call it ‘Villains Speedwalk’ from now on. The concept is good, but really needs re-working next year. 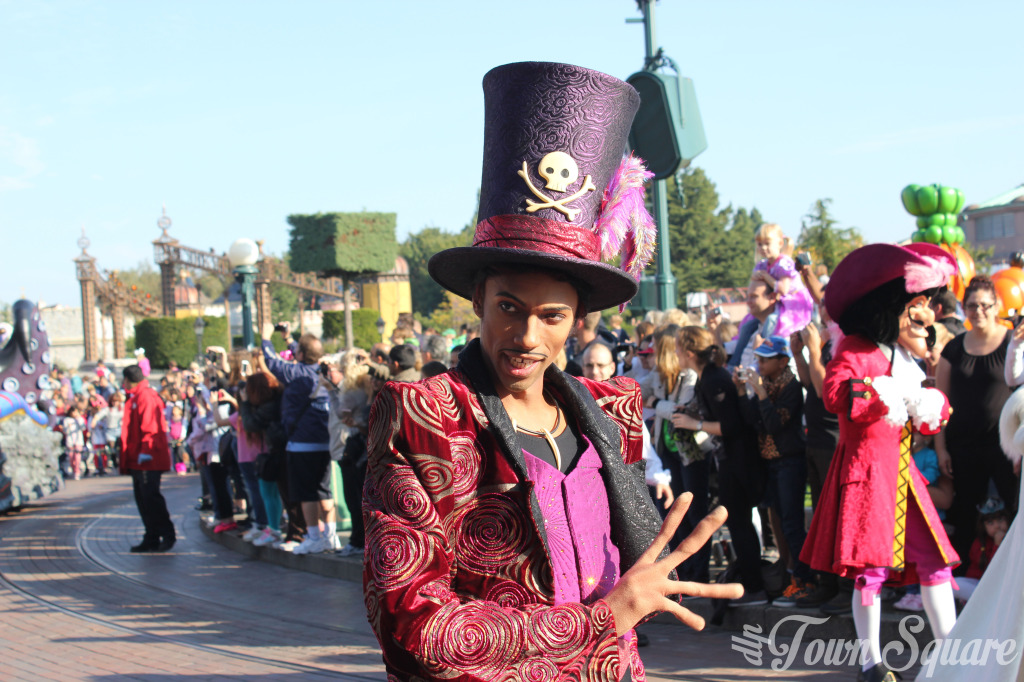 This is the star of the show. Quite simply, it is faultless. This year, the cavalcade begins with the singing of Shine on Harvest Moon; this is a rather slow song but suits the harvest season. If I had to criticise it, I’d say that when compared to the area loop and Vive la Vie, it doesn’t seem to fit. However, it is a fantastic song and has a deserved place in Disneyland Paris. I’d like to return to Vive la Vie now. Last year I wrote about Halloween from my home, I didn’t actually visit; I did, however, fall in love with the theme to this cavalcade: Vive la Vie. So to hear it, in Disneyland Paris, I was rather delighted. The song is that brilliant mix of country and high-tempo pop with some brilliant lyrics, working brilliantly with the floats and choreography. 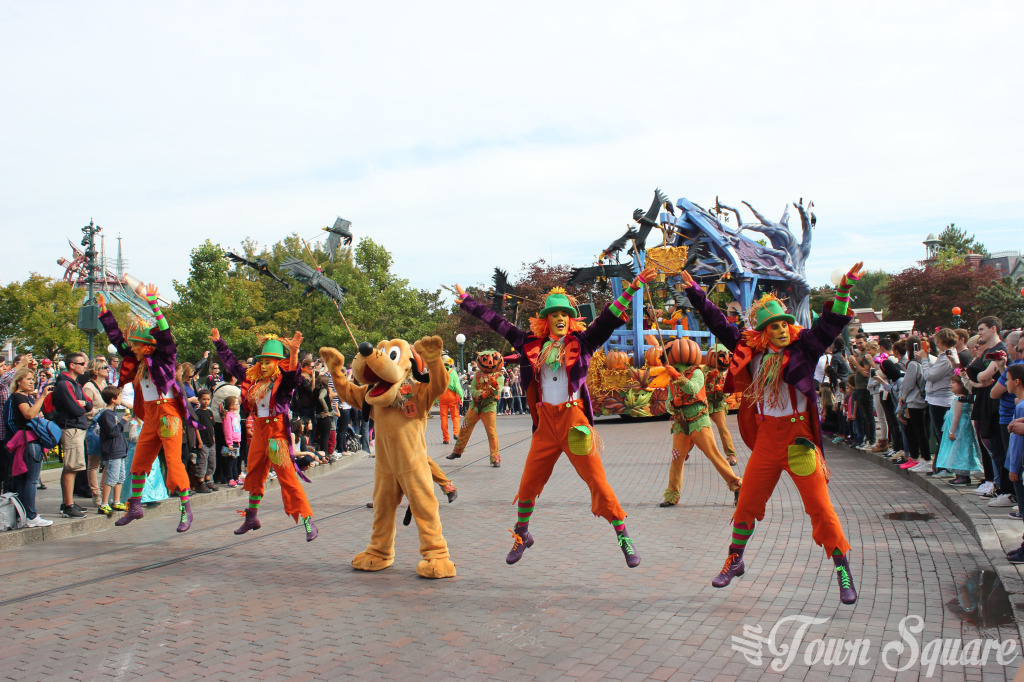 The floats and costumes ooze Harvest class whilst having that ever so subtle impression of Halloween such as a pumpkin, or a witch outfit. The theme really is a festive fantasy and everything that happens through the parade assists the effect. The dancing feels natural and ‘harvest-y’ (A word I just made up, but when you see the parade in person, you realise that it just fits). The floats are wonderfully decorated, the way dancers are incorporated into the float design is incredible. I strongly believe that these are some of the best designed floats in Disneyland Paris at the moment – perhaps ever. The crowd was engaged and dancing which is some feat. This parade could really do with perhaps two new floats adding next year. Three still seems too short, but this parade has huge potential and I’m glad it has been given its chance to flourish. 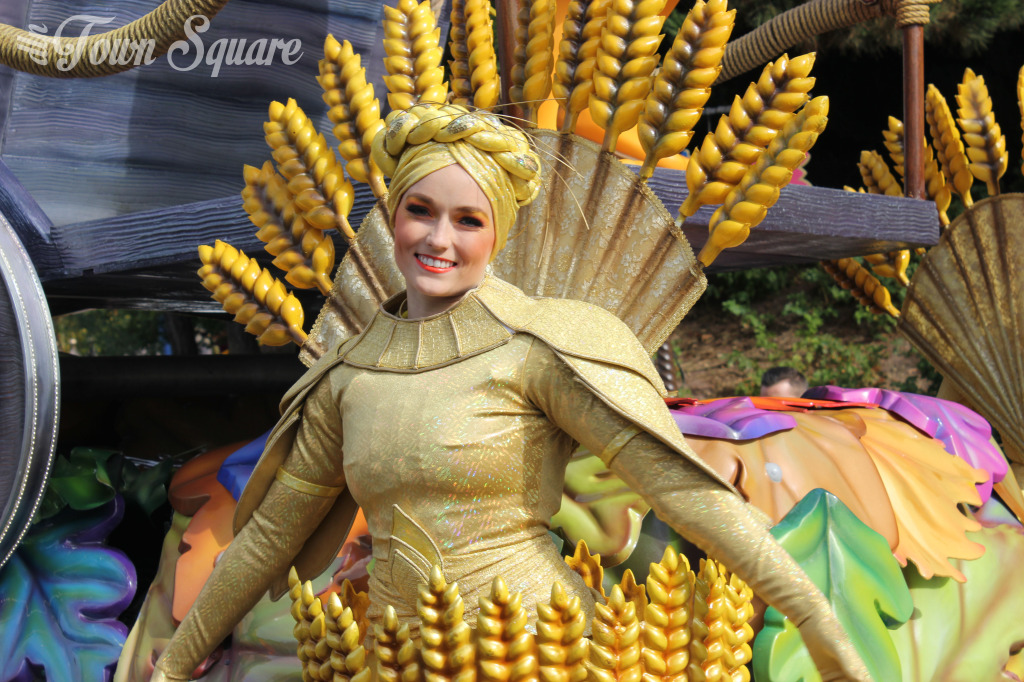 There are two parts to this new feature in Disneyland Paris. The decorations and the Meet and Greet. Starting with the decorations: The Sword in the Stone behind Sleeping Beauty Castle is gone. In its place Maleficent has left a souvenir for the castle occupants. A huge bramble bush in the shape of a dragon. The bush itself is not particularly tall, but it is piercing. 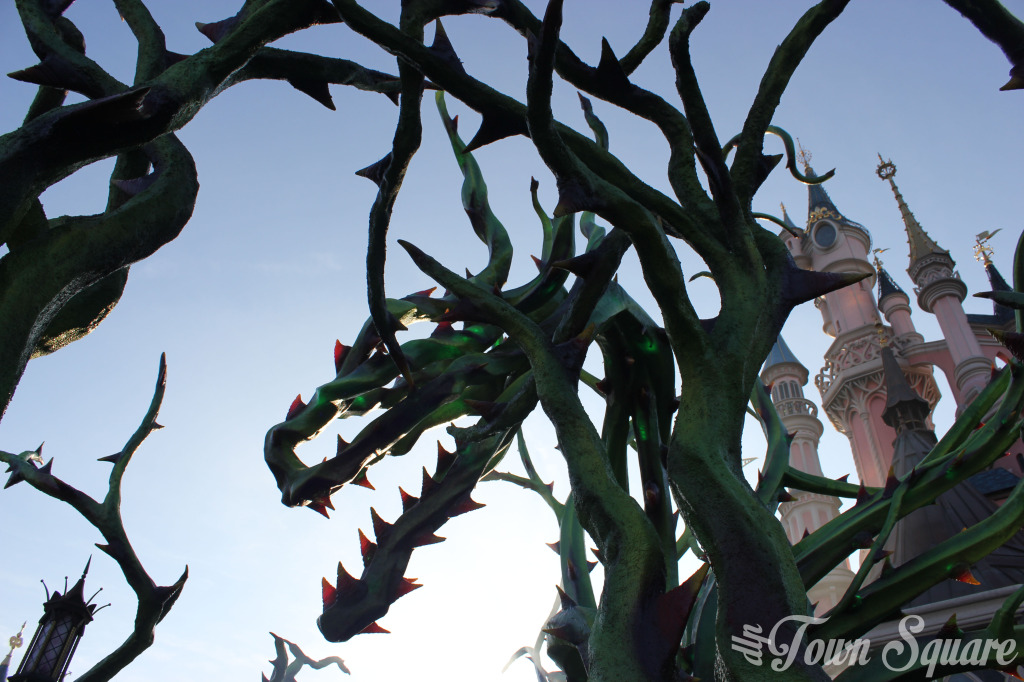 When you are in the area, you are drawn to it, you want to study it, photograph it and admire it. I probably spent about half an hour just looking at it. It really is something quite wonderful. It takes on a whole new dimension at night-time. The brambles are illuminated in green and purple and the castle takes on an evil purple glow. It’s really something to behold and admire. It is like nothing that I have seen before. Huge kudos to Disneyland Paris for this. 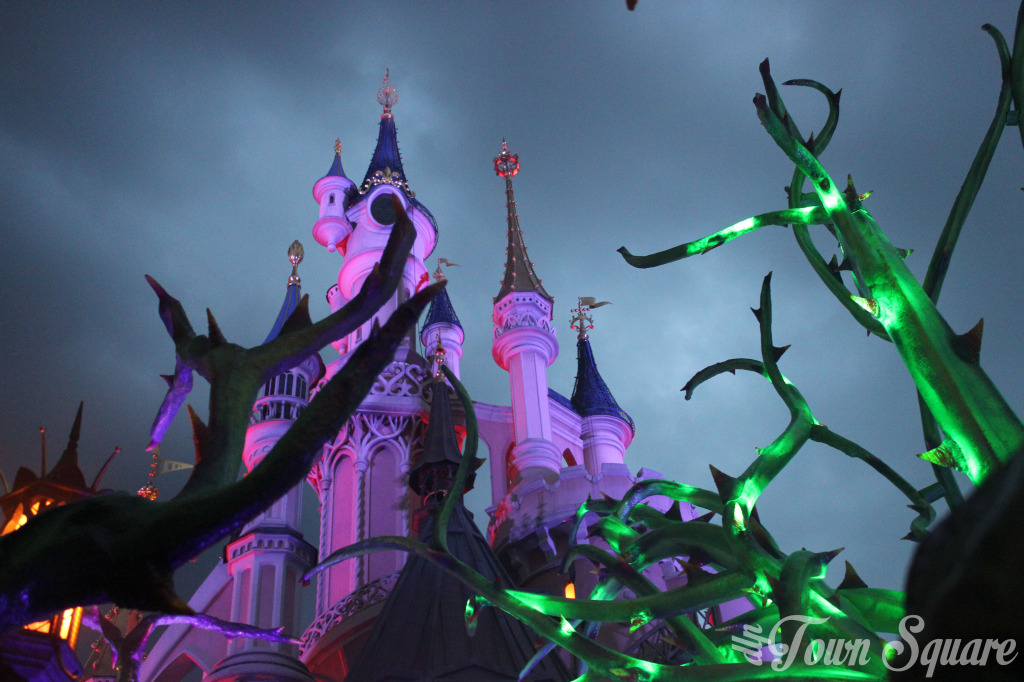 The Meet-and-Greet is a different story. It all begins with Maleficent appearing amidst fog, again detailing how the villains have taken over the castle. Then she summons more smoke and vanishes! A fantastic effect. The meet itself has a good number of characters, but it is the free-for-all scrum we have seen in the past at Disneyland Paris. Which is a shame, but the space is so limited that it really is impossible to see them organise this any other way. 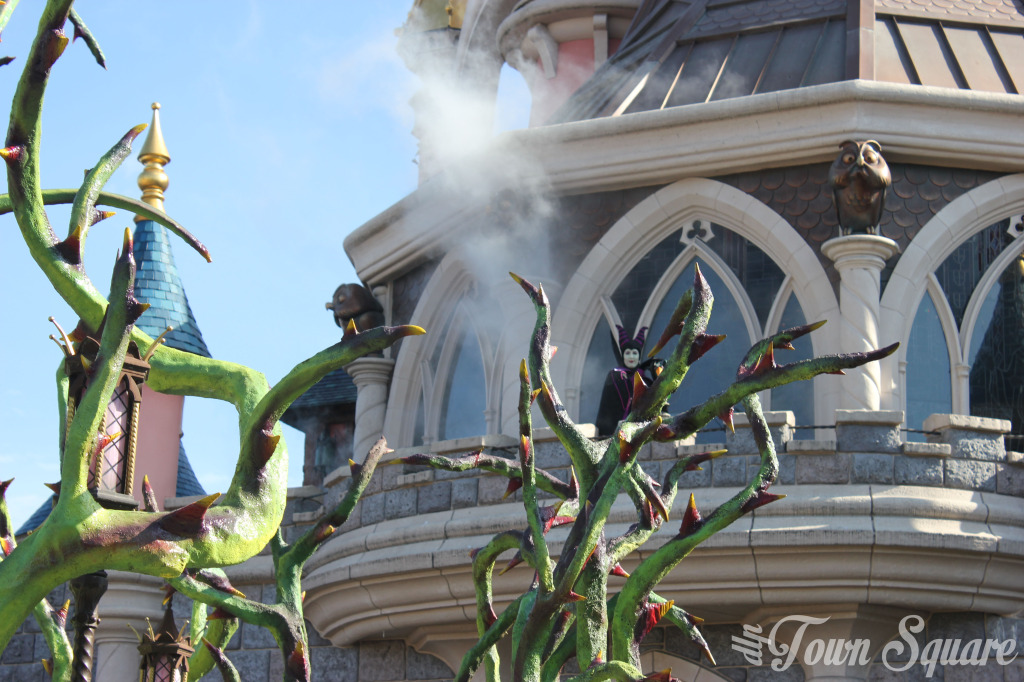 I don’t have much to say here as I didn’t spend much time at the meets. They were all themed very well, especially Jack and Sally’s Cemetery in its wonderful new location. They all had well managed queues and you got a little bag of sweets at the end. Sweet! 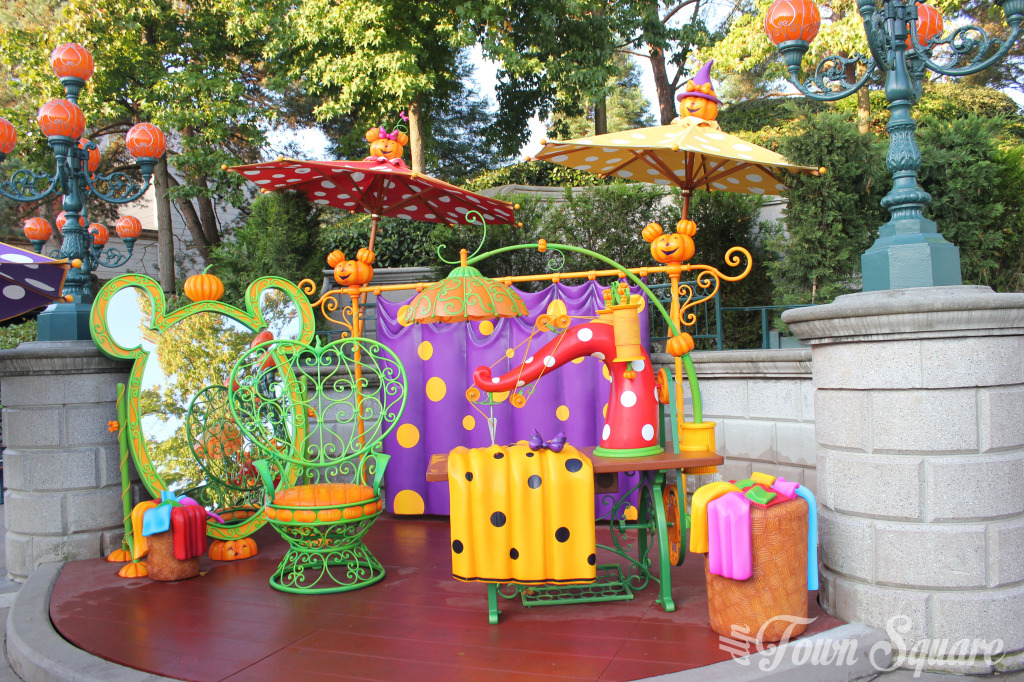 Halloween at Disneyland Paris is greatly improved this year. But it still has a way to go. Unlike Christmas where, from the moment one enters the park, we are surrounded by the sights and sounds of Christmas. Halloween feels very one-dimensional. It’s a visual experience but that is it. Once the meets and parades are done though, that really is it. Halloween effectively is over for the day. Now this is not particularly good, I’ve always seen Halloween as a ‘dark’ holiday – Disney should really do something with the dark and make it ‘spooky’. That being said, the entertainment is top-notch. You couldn’t really go too wrong by visiting Disneyland Paris this Halloween. As for me, you’ll be seeing me at Disney’s Enchanted Christmas.

With the promise of the most Maleficent Halloween ever, I headed down to Disneyland Paris this weekend to take a look at all that is