Interview with Steve Sidwell – Musical Arranger, Rhythms of the Pridelands

As a special preview for the upcoming Disneyland Paris Lion King and Jungle Festival, the Disneyland Paris teams sat down with the Musical Arranger for the Rhythm of the Pridelands show and Grammy award winner, Steve Sidwell, to discuss how the music came to be and the influences for the show. Steve has worked extensively at Disneyland Paris before, most notably for the music of the Once Upon a Dream Parade which premiered during the 15th anniversary in 2007.

How did you approach The Lion King and the Rhythms of Pride Lands?

For this show, we tried to develop new ideas, which is always difficult when you are working on such a famous story. It has been successfully treated in a variety of forms, which makes things more complicated. But Disney knows how to collaborate with creators to breathe new life into its stories. And, in fact, the concepts and models of this show have inspired the music immensely.

With such a famous soundtrack, how did you find the balance between respect for this musical legacy and bringing fresh air?

It was a real challenge. It is always very difficult to change such an iconic work. Balance is hard to find. It’s been 25 years now that The Lion King has been released. It has become a timeless classic, but at the same time, we wanted to consider it with a new look. The decor of our show being based on musical instruments, it was a key element of our approach. We took some risks, but always with immense respect for the original work. In addition, our show lasts only half an hour and is played in a very particular context: our guests are in a Park and they try to do a lot of things. It was therefore necessary to offer them a particularly exciting experience. To do this, I made sure to keep a great energy throughout the show, while providing for quieter moments with the ballads, so that children and adults can enjoy the show.

How does music fit into this show?

From a general point of view, music is an art based on collaboration. In a live production, there is always the visual aspect, and in addition to technology, there is dance, staging, singing and costumes, all of which create an atmosphere. I am very inspired by all these elements. In The Lion King and Rhythms of Pride Land, music plays a vital role. When writing for a show like this, you must be aware that music accompanies a performance: singers, acrobats and dancers, with this superb aerial choreography. Everything has allowed me to create a truly unique music, whose originality has been praised by Disneyland Paris teams. This is the best compliment I could get.

From what material did you work?

We used elements of the animation classic as well as the musical, from the magnificent instrumental score of Hans Zimmer, especially for the final fight scene, to the songs of Elton John and Lebo M.

For the wildebeest stampede and the final fight, I had access to the orchestral scores of the film. This allowed me to study very precisely what had been done for the film, and I tried to recreate the same atmosphere, while adding some novelties. And for the songs, to the extent that they had to be cut in order to fit into our format, I started from scratch. It allowed me to develop a different, unique concept. I tried to make them exhilarating, modern and original, while preserving their African influences.

What type of orchestra did you use?

A traditional orchestra, except for percussion. I was fortunate to have at my disposal a large symphony orchestra, a big band and a huge rhythm section. We had djembes, tamas or “talking drums” from West Africa, kalimbas or “thumb pianos” from sub-Saharan Africa, a kora, an instrument from Mali, congas and bongos. We used as many African instruments as possible. It was impressive to see all these instruments brought together during the recording at the famous Angel Recording Studios in London. Extraordinary! I learned a lot on this occasion. Working between Paris and London, I had the opportunity to meet many experts because African drums are really a specialist business. For the fight scenes and wildebeest, we also had a big chorus typical of Hollywood that sang in Latin, and a Gospel choir that sang in Swahili. We even had a specialist of this language with us to make sure of the pronunciation. The best conditions were brought together.

How did you manage the “live” dimension of the show?

It’s something I’ve done many times. Of course, the show has a soundtrack, but I did not want the audience to be aware of it. I wanted all the musical elements to blend into each other. The recorded music has been designed in such a way that it leaves a space for live singers. We also took into account the unique audio system of our theater, which greatly influenced the way we recorded and mixed the music. In fact, everyone in the audience can enjoy perfect stereo. Wherever you sit, you will be surrounded on all sides by the music.

In this show, it’s the songs that tell the story, not the dialogues.

Many things had to be reworked to fit the format of the show. This is one of the reasons why there is no dialogue. It’s up to the music to fulfill that role. It’s a way of doing that I know well. It’s more enjoyable as the script is written with talent and precision.

You’re saying that The Lion King and Rhythms of Pride Land was an artistic and emotional experience?

That’s my motto: making music to share emotions. And on The Lion King and Rhythms of Pride Land, it was not difficult because it is such a magnificent show, both from the point of view of writing and staging. The emotions came naturally. I just had to deal with tension and relaxation. The Disneyland Paris teams are so talented; it’s a joy to work with them. They guided me very easily in the right direction. I’m only more impatient to discover the reactions of the public!

Rhythm of the Pridelands takes place during the Lion King and Jungle Festival at Disneyland Paris from June 30th – September 22nd 2019. 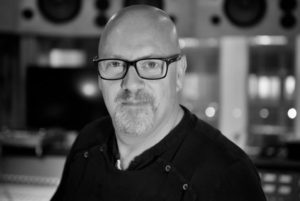 Interview with Steve Sidwell – Musical Arranger, Rhythms of the Pridelands