Optimism and Anger – The growth of Euro Disneyland

The dream was alive, the agreements signed and Euro Disneyland in France was coming a reality. After all the hard negotiations, construction began on the site east of Paris. It was a period of optimism and joy at The Walt Disney Company. It only took two years from the signing the initial agreement to the creation of Euro Disneyland SCA.

The year 1989 was particularly important in the evolution of EURO DISNEYLAND. Progress on the site, the organization and financing of the project, relationships with investors and participants, as well as a close collaboration with public parties are all concrete evidence of what has been accomplished this past year.

Just as important as our physical progress in 1989 was the progress made during the year in our financial and legal arrangements for the project.

What is also striking is that this park seemed to have success written all over it.

Even though we devote most of our efforts to opening day in 1992, we are already hard at work on developing new attractions that will be added to the MAGIC KINGDOM in future years.

In addition, we have just announced the theme of our second park: the Disney MGM studios-Europe planned to open in 1996.

The welcome letter also thanks those reading for their support in the project by becoming shareholders. The word project is important here – it was never really seen as a gamble, but it was however seen as an opportunity and one that worked rather nicely for Disney. The current ownership of the resort was as follows:

The second gate, as previously discussed in this article, was officially announced on the 17th November 1989. The idea was clearly one that Disney had liked as this followed the opening of MGM Studios at Walt Disney World in May of that year. The provisional opening date was set for 1996. As we now know, this did not happen as planned instead opening in 2002.

Besides all the initial construction work that took place in 1989 – which was a fair amount and particularly in the transportation sector of the agreement signed in 1987 – The Walt Disney Company seemed satisfied with their work. Appropriate European investors had been found and the company did reasonably well upon launch on to the European Stock exchanges in Paris, Brussels and London.

In 1990, the company continued to grow further. A brand had been created, Euro Disney.

“Euro Disney” conveys the essence of our enterprise. The new new logo combines a bold Euro with the quintessential Disney symbol, Mickey Mouse, and the distinctive signature of his creator. With its striking new colours, it symbolises Disney magic and creativity. “Euro Disney Resort” conveys the concept of a complete vacation destination, and is the name of the overall project.

“Euro Disneyland” is the name that best evokes the unique experience to be found in the Theme Park we plan to open in the Spring of 1992. We have decided, therefore, to reserve this very special name for our first Park.

And so another failing of the resort had been created. The name Euro Disney was seen to be uninspiring and too business-like.

However, despite this optimism is still the order of business in the new Euro Disney SCA. ‘Our business is building dreams’ and so it continues. Dreams seems to be the big word in 1990, ‘our dream’, ‘the dream’ etc. Recruitment plans were being drawn up and Cast Members were being trained in both the United States Disney resorts and Tokyo Disneyland. Everything is being set up perfectly for the completion of a wonderfully perfect Disney resort. The level of positivity was so high that in 1990, Disney submitted the plans for the second park to the French local authorities for completion as early as 1994.

The European project was seemingly going perfectly, expansion could not happen fast enough. The land granted to Disney by the French state was one-fifth the size of Paris and Disney seemed to want to accomplish a lot on that land.

1991 was perhaps the biggest year that Euro Disneyland has ever seen, completion of large parts of the project was beginning to loom and the opening date was set as April 12th 1992. After years of planning and building, it was about time for people to join in the biggest party Disney had ever held. A big theme so far in this article has been expansion, and 1991 was no exception:

Even as we prepare for Opening, your company has been hard at work on plans for the next phase of development. Design is almost complete on the Disney MGM Studios-Europe and additional hotels. Architects have been selected for the housing and development projects and discussions are proceeding with the French public parties for the signing the Second Detailed Program.

Planning has also began for the third Phase of the Project [Park Three] and our Imagineers have dreams that will carry us well into the next millennium.

It would not come as a surprise to you that at this time, Euro Disney SCA were operating at a loss – in fact it is only natural, they were spending and spending with no income yet possible. The overall tone coming from the company was a sense of optimism – this was the “dream” after all.

Whilst Euro Disney SCA were living their dream, others were living their nightmare. France is a conservative nation in many respects. The protection of French language and culture is vital. The Americanisation of France was something that was frowned upon very strongly by the French public and the pompous Académie Français [A body set up by Cardinal Richelieu in order to create a French dictionary and preserve the French language]. One French novelist described the arrival of American influences, and in particular McDonalds, as a rotting of French society. A way to spread shoddy morals and activities throughout France. Mickey was not the most welcome figure in France at this time.

Disneyland Paris had a mixed reception in France, the company’s initial years were filled with optimism and hope, but underlying it all were issues that would fast become apparent upon the resort opening. Cultural differences between France and the vision that Disney sought to promote were evident and blocking.

Next up: 1992 and the opening of a new Disney resort in Europe. The calm and celebration before the storm. 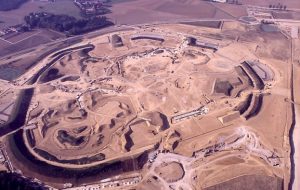 Optimism and Anger – The growth of Euro Disneyland

The dream was alive, the agreements signed and Euro Disneyland in France was coming a reality. After all the hard negotiations, construction began on the