The future of Swing into Spring at Disneyland Paris

As the 2016 iteration of Swing into Spring comes to an end, it is time to think ahead to 2017 and beyond. The season, which was launched in 2014, has only gone from strength to strength. Each year the season expands, adds brand new decorations and shows. It has become, to many fans, their favourite season and a staple of the Disneyland Paris annual calendar. So, what is the future of Swing into Spring?

2017 is a big year for Disneyland Paris. April 12th will see the European resort turn twenty-five years old, and with it a year of celebration which itself has become a Disneyland Paris tradition. Unfortunately, this means that Swing into Spring will not be returning next year. But what is the future of the season in 2017, but perhaps more importantly in 2018?

The joy of the Spring season is that, in theory, elements can be saved and be presented as special happenings in their own right. On top of the list must be Minnie’s Little Spring Train, or at least some form of it. The Sunny Bunnyland song is far too popular to go away in the cupboard for a couple of years, it illuminates the entire park and really lifts the already joyous atmosphere to an even higher level. Therefore, the top of any list of things to ‘save’ from Spring has to be that song.

Other elements that could very well be brought across include Goofy’s Garden Party and/or Welcome to Spring. Both shows do not heavily rely on the Swing into Spring theme, but mention Spring very briefly.

The new Easter Egg decorations can be used quite easily in the park during the month of April for the Easter Holidays as they do not require too much in the way of preparation and maintenance.

Naturally, not all of these elements will return, but individual bits can quite happily co-exist at Disneyland Paris with the 25th Anniversary. Much like Halloween and Christmas which will be largely unaffected by the celebrations (as in previous anniversary years).

What is the future of Swing into Spring?

Naturally, this is the question on everybody’s lips. Swing into Spring is a very impressive season, it has fantastic live entertainment, enjoyable decorations, delicious snack options and well-designed merchandise. The more Spring that finds its way into the Disneyland Paris parks (and yes, Walt Disney Studios should be included), the better! Let’s cross our fingers for more innovation, more shows and parades and more special character meets for the most colourful and fun time of the year to be in Disneyland Paris!

Let’s start our own campaign for Sunny Bunnyland to come back for the 25th Anniversary year, tweet a photo of the train or its flashmob with the tag #BringBackBunnyland 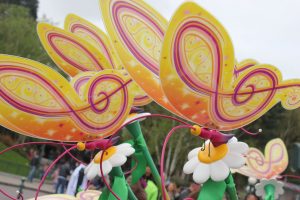 The future of Swing into Spring at Disneyland Paris

As the 2016 iteration of Swing into Spring comes to an end, it is time to think ahead to 2017 and beyond. The season, which