Why flying to Disneyland Paris is perfectly safe

Disneyland Paris has reopened and many of us are looking on the safest way to get there! I opted to take a British Airways flight to Paris after having read about their various safety measures and the HEPA filters that people seem to be talking about. Here is my experience, allowing you to judge how you want to get to Disneyland Paris.

Both London Heathrow, and Paris Charles-de-Gaulle, were enforcing social distancing pretty strictly. Markers on the floor indicated where to stand, and many bench spaces had signs over them. These little gestures are reassuring to see such large places are taking bold safety measures. They also made me a little disconcerted, almost like I was engaging in a dangerous activity.

Hand Sanitiser is available around both London and Paris terminals, and is never a struggle to find some sanitiser. It all felt pretty safe – this, of course, helped by the fact that the terminal was also extremely quiet.

On board the plane

Boarding is a slight bit different to normal, boarding the aircraft is now by row number starting at the very back and going towards the front. This means that boarding is very well socially distant and that you don’t have to walk past half the plane in order to find your seat. Upon boarding, the cabin crew also provided a sanitary kit which comprised of a hand sanitiser and antibacterial wipe.

As the flight was not busy, it was able to be do social distancing with passengers sat by the window only. Upon talking to crew the way it’s currently working is that they’ll attempt to give everybody window seat, then start to fill the aisle seat. The middle seat is usually empty, but is used if absolutely necessary. But again, those trusty HEPA filters mean that you are breathing the most clean air possible.

You must wear a mask from entry to the airport, for the entire flight and in the arrival airport . As British Airways is not offering a meal service for the moment, cabin crew hand out a little snack bag. You may remove your mask to eat this.

Disembarkation was once again by row number, starting at the front and working its way to the back of the plane. I actually prefer this as it meant that nobody is fighting over each other to get off the plane.

I felt safe throughout my entire time travelling to Disneyland Paris, The social distancing really worked at all point of the journey – including transfer – I actually booked to go back as right now I really don’t feel like I can face the RER from Paris Gare du Nord.

If you are interested in reading the experience via Eurostar from London St. Pancras to Paris Gare du Nord, my friend Ben covered it on DLPReport. 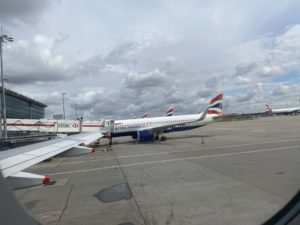 Why flying to Disneyland Paris is perfectly safe

Disneyland Paris has reopened and many of us are looking on the safest way to get there! I opted to take a British Airways flight