Discoveryland: The most beautiful land?

Discoveryland isn’t traditionally ‘beautiful’; it has no trees or flowers, instead it has grey rock formations. That is no bad thing however. The idea of a land inside of a Disney park is to immerse a guest into a story. The story in Discoveryland is best created by rock formations and fountains, and so in that sense Discoveryland is a near-perfect land. It is at night when Discoveryland really comes to life, the futuristic landscape becomes luminous in a golden glow which makes this land an extremely pleasant place to be when night falls. The stars of this land are the attractions themselves – where other lands focus on landscaping to enhance their aesthetics, Discoveryland has rides that are the aesthetic element – Space Mountain at night is pure eye-candy.

Discoveryland has two eateries. The first, Café Hyperion is Europe’s biggest fast food restaurant. It serves a range of burger-type fast food much of which is now based on the hugely popular Star Wars films. This is ideal as the adjoining Videopolis is the home of the Jedi Training Academy. The giant airship outside greets guests to a wonderful themed ordering area. Cast members wear Captain outfits to complete the effect.

Pizza Planet is a restaurant which is seldom open at present. This eatery is an all you can eat buffet – the cheapest in the result – specialising in Pizza. The restaurant seems to suffer an identity crisis and whats more doubles rather brilliantly as a bland canteen outlet. Having said that, the restaurant has clear potential and the idea of a Pizza Planet is one to pursue. Additionally, the pizza is actually rather good.

Much like restaurants, Discoveryland is home to two boutiques: Star Traders and Constellations. Star Traders is currently closed, however for the purpose of this article it is open as the shop will re-open in a new form next year. Star Traders is the number one Star Wars store in Europe. It sells a wide range of Star Wars merchandise a number of items are exclusive to Disneyland Paris. When it reopens, Star Traders may well have a new name and will be situated at the exit of Star Tours – the current building will be used for a Star Wars meet and greet.

Constellations is a store that is situated at the exit of the Buzz Lightyear attraction. The store has been there since the resort opening in 1992 – and still features a window display from that era too, the only store in the resort still to do so. It sells a range of merchandise from across the Disney brands with a focus on those that link to the Discoveryland themes.

If you like characters, it is quite unlikely that Discoveryland is your first calling point. In fact, here character meets are rather rare. There is a chance that you may bump into a Star Wars character or two, maybe some of the VIP characters (Mickey, Minnie etc.). But this is not overly common.

This, of course, will change in 2017 when a Star Wars meet and greet is scheduled to open in the former Star Traders building.

It is undeniable that Discoveryland has a whole host of amazing rides! The centre-piece of the land is Space Mountain, this beautiful attraction is at the very heart of the land and is visible all around the land and the resort. The steampunk designed attraction opened in 1995 and focused on the Jules Verne novel De terre à la lune. This was changed in 2005 to become Space Mountain: Mission 2. This is the overlay to the attraction that remains to this day.

Star Tours is a favourite of the Disneyland Paris community. When it closed down in March 2016 – to become Star Tours: The Adventures Continue, which will open in March 2017 – an event was held to commemorate the occasion. This, for many, was a reason to come to Disneyland Paris in itself. An attraction that one could never find boring or uninteresting, the first flight of Captain RX will be fondly remembered.

Buzz Lightyear Lazer Blast opened in 2006 and replaced the extremely popular Le Visionairum attraction. This family favourite permits guests to be recruited by Star Command and to defeat the evil emperor Zurg once and for all. This is a fun and interactive ride whose game elements allow for an easy repeat ride as they try to top their previous best score.

Discoveryland is a very different type of land to the others in Disneyland Paris. It feels much more concrete than the other lands, but this is part of its story. The attraction line up is solid, but there are some elements missing from the land such as a table service restaurant. 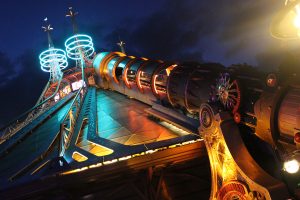