Adventureland is our portal to a new world, a world of oriental adventure. Where swashbuckling pirates meet explorers, and is a land for everyone to explore at their own leisure. Indeed, this is one of the most beautiful, picturesque lands in Disneyland Paris and really does deserve exploration. Where else in Europe can you be in a moroccan-style bazaar and then seconds later be in a jungle paradise?

Adventureland: The most beautiful land?

Most people will enter Adventureland for the first time through the giant bazaar. Whilst this is rather generic in its design, it also resembles something straight out of Aladdin. But the real beauty begins before you even get that far! As you leave Central Plaza, you are immediately immersed in a tropical setting. Make sure you gaze over to the castle, and don’t miss the unique photo opportunity of the Castle in a dessert setting.

Make sure you look up as you walk through the bazaar, the beautiful lighting above you was a gift from the Moroccan government for the grand opening of the park. After the bazaar, the entire land seems to open up before you in its all its lush green glory. That initial vista is breathtaking, lush green trees surrounded by a small river. Just to the right, one can see Skull Rock and Captain Hook’s Galleon. The water surrounding the land truly is something to behold. The land is such a wonderful blend of multiple regions, and it fits together seamlessly. It often feels that Adventureland is the only land you can get lost in, not just metaphorically but also physically.

Adventureland is the king of the food stands – they are everywhere! But there are also several beautiful restaurants dotted around the land.

Blue Lagoon is a highlight of Disneyland Paris and should be on every fans bucket list. There is nothing that can compare to dining within the Pirates of the Caribbean atmosphere. The restaurant specialises in seafood and Caribbean cuisine. It is one of the best places to sit and relax and take in a good meal in Disneyland Paris.

Restaurant Hakuna Matata serves a Moroccan style cuisine. Whilst many fans know it for the Hakuna Fries (and why not? They are tasty!), the real star dish is the beef in African Sauce dish. It is both the cheapest on the menu, and the most unique. The restaurant plays Lion King music in a mud-hut style setting with two wings named after Timon and Pumbaa.

The old Explorers Club restaurant is now Colonel Hathi’s Pizza Outpost, what is has lost in classification it maintains in style. Since Disneyland Paris does not have an Enchanted Tiki Room, this is our version. There are plenty of Tiki room influences in here, but the real star is the wonderful decor inside the restaurant and the enjoyable outside seating area in summer. This has become a favourite place to come and have a mid-afternoon soft drink.

An honorable mention here for Agrabah Café which serves a wide range of middle-eastern inspired cuisine.

As diverse as the land, there really is something for everybody in Adventureland. The standout store in Adventureland, and possibly the entire Disneyland Park, is La Girafe Curieuse. This store, located in the Aventureland Bazaar area of the land, is a safari themed boutique selling a range of fun and interesting merchandise. Perhaps the funniest elements of the store are the giraffe inside the store and the awesome jeep outside the front. Keep an eye out for these!

Just after you have taken in the thrill of the Pirates of the Caribbean ride, make sure to check out Le Coffre du Captain. Here you can purchase all your favourite pirate merchandise in a caribbean-style setting. It makes for a fun and interesting ride exit as guests often find themselves looking for their ride photograph on the screens.

Temple Traders Boutique is one of the two Indiana Jones boutiques in the land. Here, you will find one of the largest Indiana Jones merchandise collections in Europe. Keep a special eye out for the special Mickey Mouse Indiana Jones cross over pieces, they are a unique souvenir from your time at Disneyland Paris.

Advntureland is a fantastic place to meet characters in Disneyland Paris. Peter Pan and friends will often make an appearance by the Skull Rock which provides guests with a wonderful Neverland backdrop. Captain Jack makes frequent appearances in Adventureland near the giant pirate ship and the Pirates of the Caribbean attraction.

Characters from The Jungle Book and The Lion King are meetable within the land, as are Mickey and Minnie in a special adventurer costume.

The standout of the land, and the entire park, is the Pirates of the Caribbean attraction. This attraction is a true Disney classic. It is one of the longest attractions in the park and features that classic Yo Ho song. there is nothing like taking a short cruise on this ride. It is a staple of the Disneyland Paris experience and it is impossible to imagine a trip to Paris without taking in the experience.

Whilst not a “ride”, one must mention Adventure Isle once again. The scale of this walkable adventure is immense and takes up a large part of the land. Just walking this area alone could take you an hour or so and so it is important to consider it as an attraction.

Finally, Indiana Jones et le temple du Péril is a rollercoaster situated at the back of Adventureland. This attraction is difficult to get to, but is certainly worth having a walk towards to see the theme of the area. Even if you are like me and won’t ride it, there is something to be gained from walking through the queue. 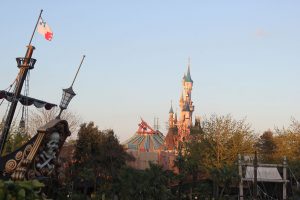 Adventureland is our portal to a new world, a world of oriental adventure. Where swashbuckling pirates meet explorers, and is a land for everyone to