The easiest way to the magic

Travelling from the UK

Travelling from the UK to Disneyland Paris has its set of challenges. We are an island, there is a stress factor for many drivers when traveling abroad on the continent due to various differences. There was never the direct route to Disneyland Paris, one that involved such little effort and provided that the start of the holiday occurred not when you reached your hotel in Disneyland Paris, but when you arrived at the train station in London.

An extension of the magic

For many, the magic of Disney begins when we turn the corner of Main Street USA and see the castle in front of us. But Eurostar have managed to extend this even further. Travelling from Ashford International travellers will see a giant Sleeping Beauty Castle of the lift heading to the Eurostar departure level, Disneyland Paris Cast Members are on hand in the station to answer any questions you may have about the resort and on top of all of this, Disney characters announce that the train is getting close.

This extension of the magic also extends to the Disney Express, a service that allows guests to check into their hotel and get their park tickets on the train. Disneyland Paris Cast Members magically find guests at their seats and hand their hotel documents. Once they get to the station, guests simply hand their bags at the Disney Express desk and go to the parks and have fun. Later on in the day, their bags will magically arrive in their hotel room.

The magic of Disney holidays is the ease, the enjoyment and the entire experience. Eurostar have worked with Disneyland Paris to create a complete experience that extends from the UK all the way to the resort gates.

On board this first arrival was Sir Richard Branson meeting Mr. Philippe Bourguignon (who at the time was president of Euro Disney S.C.A.) at the Gare du Marne-la-Vallée Chessy. To celebrate a float was created representing the classic Eurostar train front with two Mickey ears with a ‘platform’ on either side of the train acting as a place for the two gentlemen to stand, this was accompanied by Grenadier guards.

Of course, the station has changed; Eurostar trains no longer depart Waterloo station in London, but St. Pancras instead. With this move rail journey times to Disneyland Paris have further decreased and with future rail line construction in France this could potentially tumble even further. Disneyland Paris has never been closer or more convenient to get to. 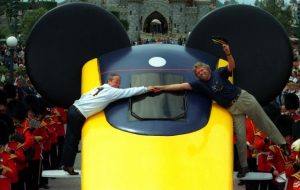 The easiest way to the magic

When considering your options for travel to Disneyland Paris from the United Kingdom your options have become much wider than they once were. But in