How will our perception of Disneyland Paris change in 2017

A lot will be happening at Disneyland Paris in 2017. That much we already know; the indisputable event of 2017 will be the 25th anniversary of the resort, but other exciting developments will also be taking place such as Season of the Force and an expanded Disneyland Paris Half Marathon Weekend.

But rather than asking the straight forward question of what is coming up which you can read in countless places and on social media, the better question is what will change in our minds. Disneyland Paris fans have become increasingly optimistic over the direction of the resort, but niggling doubts and negativity remains. And in the wider Disney parks community Disneyland Paris is still seen in some circles as the ugly duckling. But will that change over 2017?

Disneyland Paris is gaining in reputation

The answer to the above question is, undoubtedly. Each year and with each piece of news that Disneyland Paris releases the reputation of Disney’s European outpost increases. This is true not only with local fans but with the international segment as well. Returning to the 20th anniversary and fan appreciation of Disneyland Paris was at an all time low.

Since then Disneyland Paris has opened Ratatouille, launched a large scale refurbishment plan and swapped out annual celebrations and opted to run shorter seasonal celebrations which ensured guests experienced something very different on each visit.

This has worked, Disneyland Paris fans are consistently praising the work of those leading the parks and the quality of the refurbishments and new additions.

This year all eyes will be on Disneyland Paris which will shortly be celebrating its 25th anniversary. The celebration is almost unprecedented, two new attractions, a new nightly evening spectacular, a brand new parade and a few new shows and happenings. On top of all of this there will be, presumably, some form of decoration in the park to create a festive atmosphere.

It is very difficult to imagine that Disneyland Paris emerges from this monumental event without its reputation in both the press and online communities increasing.

Season of the Force

The other big push at the moment is Season of the Force. Disneyland Paris has always suffered in the winter months after the Christmas season. Whilst many take advantage of the cheaper rates, many are put off by the colder weather meaning that the parks can be very quiet indeed.

To combat this, Disneyland Paris has launched the Season of the Force. This Star Wars themed celebration will attract many guests from a previously untapped demographic. We already know that this celebration shall be returning in the 2018 winter period, and next year will also boast Star Tours and the upcoming meet and greet in Discoveryland – Season of the Force may well be the first big celebration to span both parks!

The “Project Sparkle” refurbishment plan is scheduled to end this summer when Pirates of the Caribbean reopens. This schedule has been tough for fans with some key attractions closed for months at a time; the rewards of this, however, are marvellous.

Fan favourites are returning with increased colour and magic and the park genuinely is looking “as-new”. Painting a ride may seem trivial to some, but to fans it is greatly appreciated and is noticeable.

Disneyland Paris once had a reputation of being the ugly duckling of Disney resorts, but no longer. 2017 will be the year that everyone will take notice and look to book a trip.

Now for the negatives. I cannot ignore the change of Space Mountain into Hyperspace Mountain. Here’s the problem, I see this more as a reflection on WDI than Disneyland Paris – although the blame will, perhaps unfairly, land on the shoulders of the resort itself.

The reasoning is clear, Star Wars is popular and it sells. It’s easy to understand the commercial decision behind this swap and it makes commercial sense. However Disney parks have always been about more than pure commercial elements. We love the parks because of the story they tell, story is king – theoretically.

As I have said, however, I feel this is a wider direction for Walt Disney Imagineering as similar switches have occurred in other parks (to Hyperspace Mountain as a seasonal change and the Tower of Terror change to a Guardians of the Galaxy attraction which is permanent.

A transformative year… and the best is yet to come!

Local fans have a reason to really brag about the resort and international fans a reason to visit. I cannot think of a better birthday gift for Disneyland Paris. 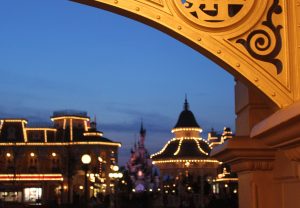 How will our perception of Disneyland Paris change in 2017

A lot will be happening at Disneyland Paris in 2017. That much we already know; the indisputable event of 2017 will be the 25th anniversary