I was converted to off-site hotels many many years ago. My last stay in a Disney hotel was in 1999, and whilst I had looked for an opportunity for that to change for many years, I simply couldn’t justify the cost. Having said that, the plan was always to try it again in 2016 at Halloween. Being invited to the Mickey and the Magician press event meant I got to try a Disney hotel before I even had anticipated, and that hotel was the Newport Bay Club. A hotel whose refurbishment I had keenly followed and thought looked absolutely beautiful. I was filled with glee at the prospect at having a night stay in there. But did it match my expectations? In short, yes and then some. 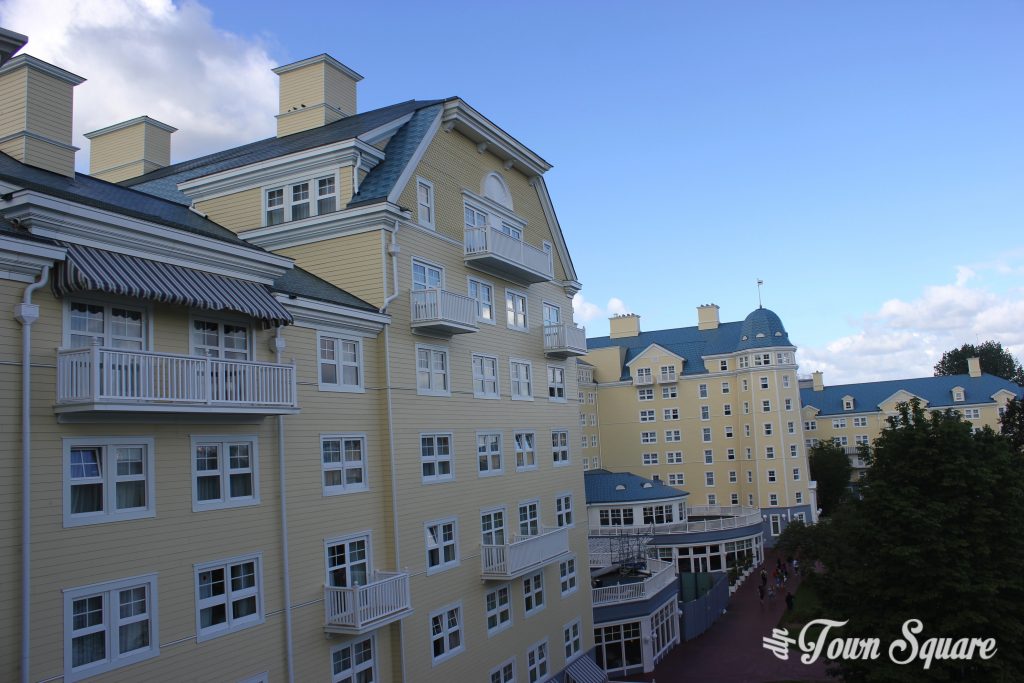 I must preface this and state that the check-in process may well be slightly different for press events than for ordinary stays. I made my way directly to the Compass Club desk and gave my name. It was checked off and my luggage was placed with the baggage boys and on the way to my room. The exceptionally friendly Cast Member (whose name I have forgotten, but she was brilliant!) guided me through the procedure, I filled in a tiny form and was shown how to use the Easy Pass system. I won’t discuss Easy Pass and if it works or not as I didn’t use it other than to claim my breakfast the following morning. I was given my keycard and that was that. All done.  A painless, and actually rather enjoyable experience. I was very eager to see my room.

The Newport Bay Club is a big hotel. And even by calling it big, somehow I am understating it. The scale of it is seriously impressive. I got lost finding my room, but luckily a Cast Member is always on hand to help show you the way. The exterior of the hotel is a New England port themed hotel. Its warm yellow glow is inviting, but inside this changes to a beautiful aqua-marine blue. Beautiful is the right word, having been in the hotel both before and after its refurbishment, the place feels so much more inviting now. The corridors are of a nautical theme but have a very warm carpet. It is a hotel with a very classy feel but feels distinctly Disney. Just from walking through, you understand that this hotel is not ‘just a bed’ as I have always claimed a hotel to be. 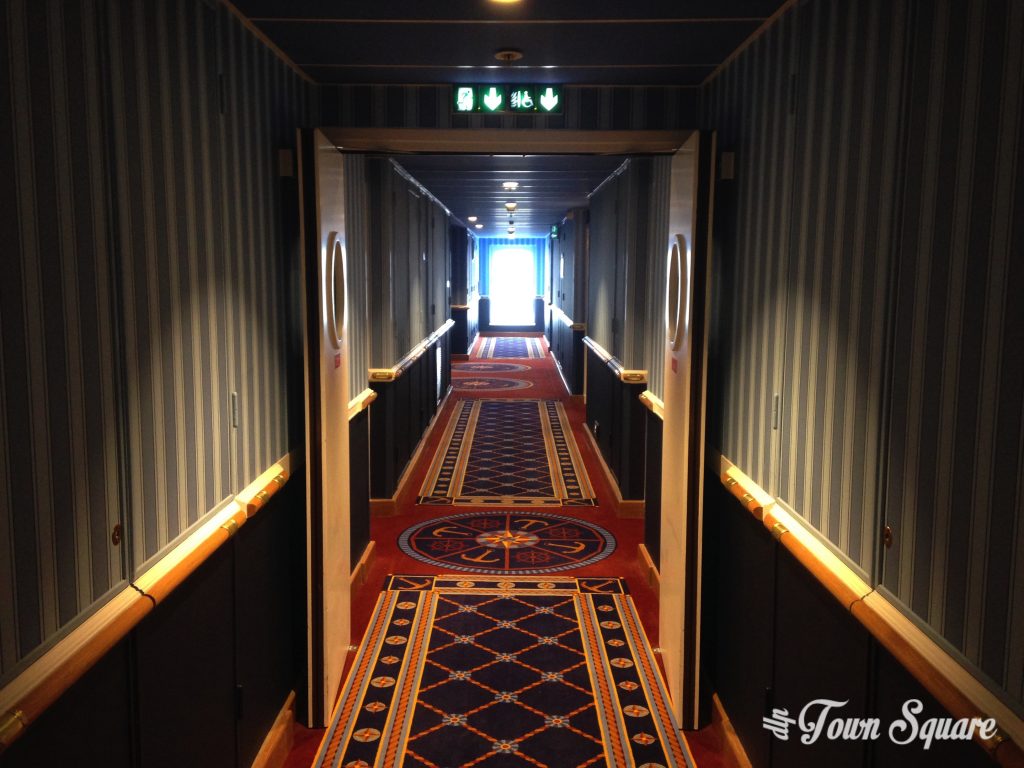 I’ve never been overly bothered by hotel rooms when I visit Disneyland Paris. The hotel is a means to an end; I must sleep at the end of the day and then I will wake up and return to the park. That ended as soon as I opened the door to my room. I was blown away. The room was very large and spacious and featured a double bed as well as a single. My luggage was securely placed in a luggage rack within the bathroom area. 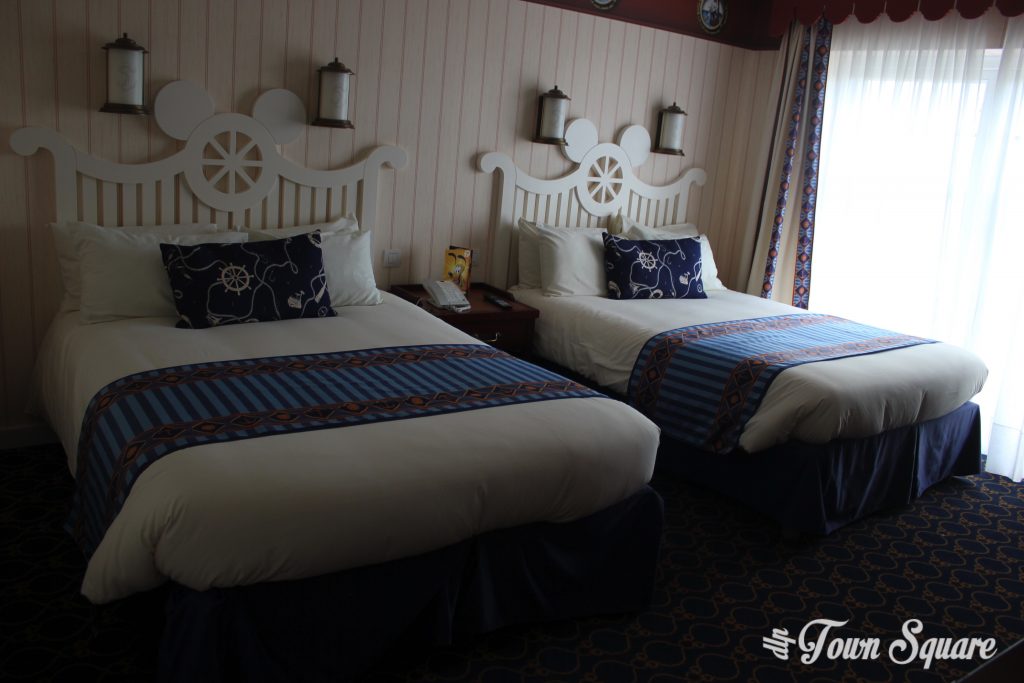 The Disney Difference was evident everywhere. This hotel was way more than a simple bed. The nautical theme that was evident in the hallway is continued into the room. The carpet is an anchor rope with hidden Mickeys formed within it. The room is decorated as if to be a cabin, with Disney characters peering through port holes. 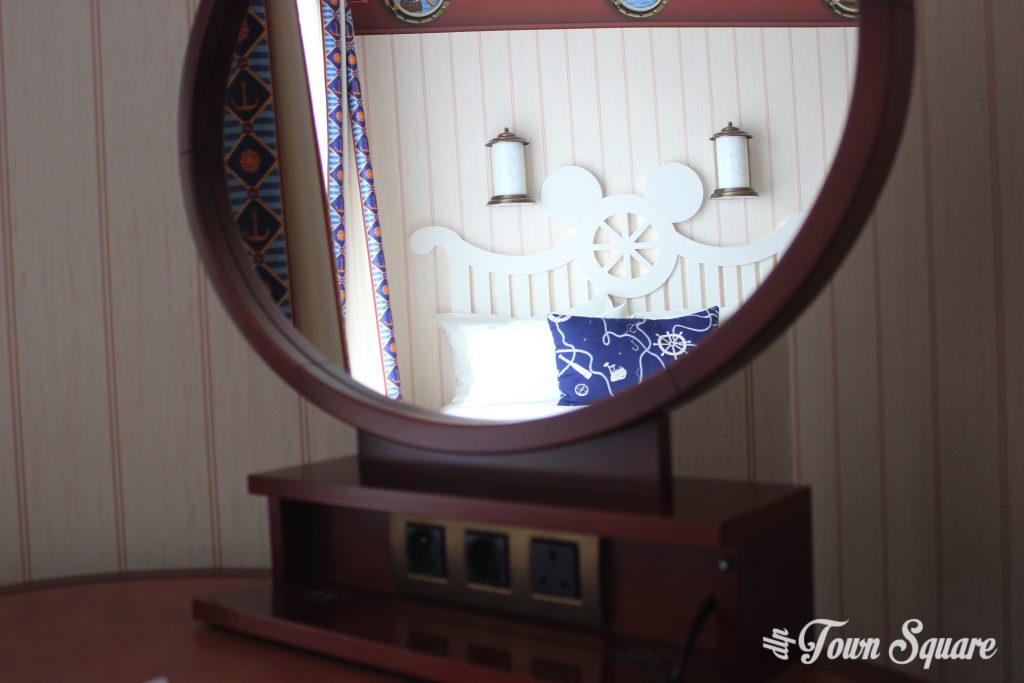 The bed itself is ridiculously comfortable. I struggle to sleep in a new bed – and that includes hotel beds – but here I simply drifted off without fuss. There are Mickey silhouettes on the bed mast, and the bedding kit itself is beautifully nautical themed. 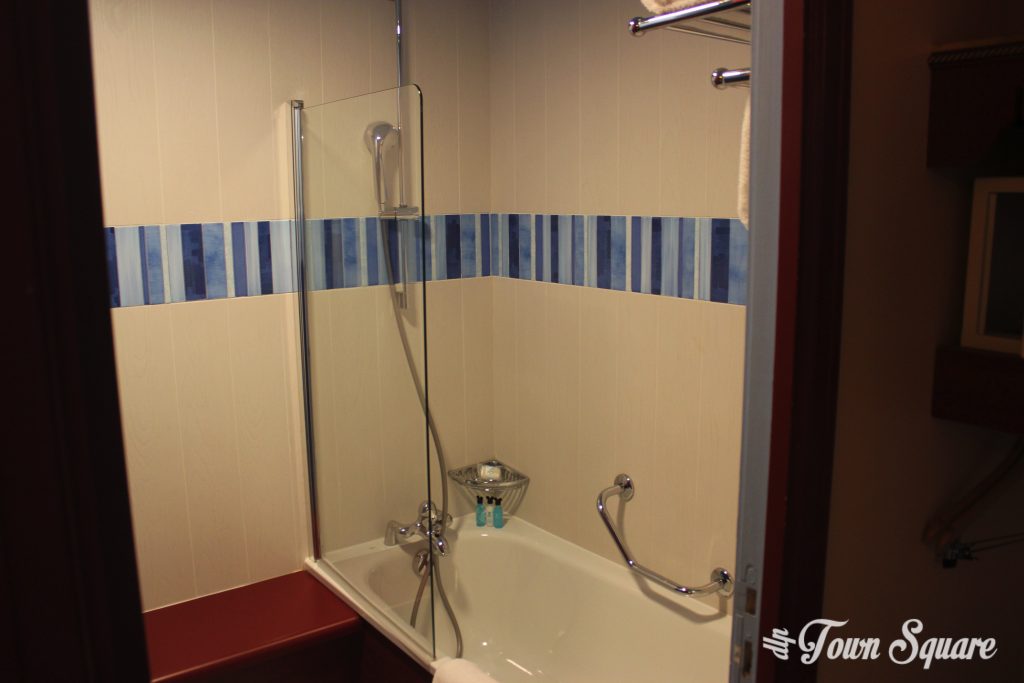 The bathroom was lovely. Spacious, and fully stocked with washing soaps and powders. I used the bath on the morning of my departure and it was warm and ran very well. The washing kit provided is ample for a couple, although a family should probably consider requesting another bottle of shampoo and shower gel.

Another thing to note, some rooms have a balcony attached to them. I was fortunate enough to have been given one of these. The room outside to stand out was plenty and the views over Lake Disney towards Disney Village was exceptional. Imagine my glee when I discovered that I could see the Castle from the balcony! 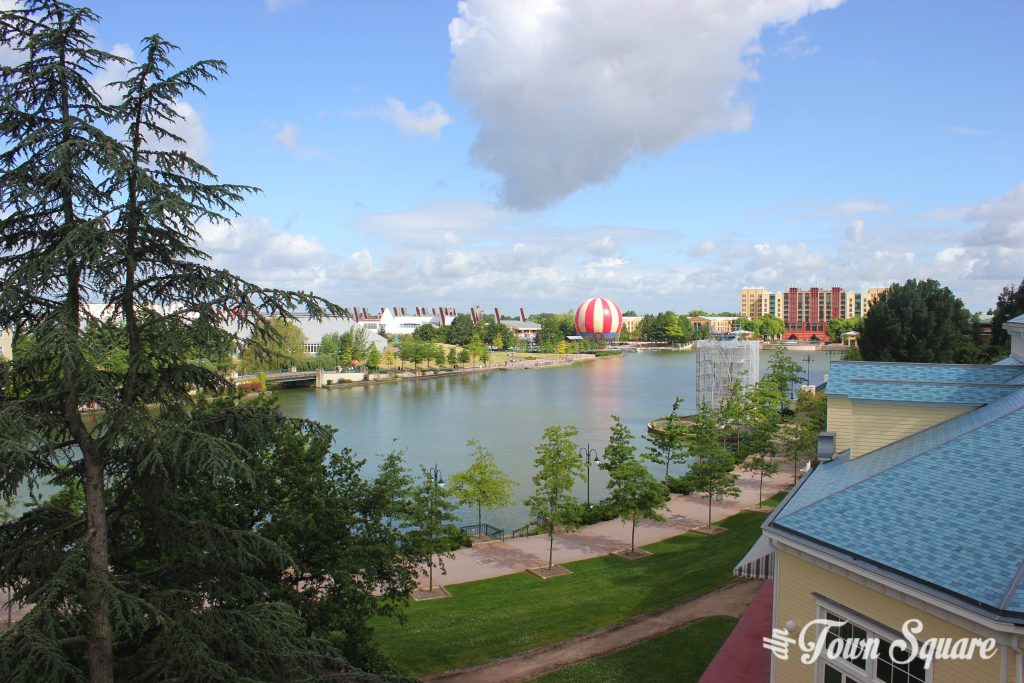 The breakfast at the Newport Bay Club takes place in two rooms. The Yacht Club or Cape Cod. I took mine in the Yacht Club but I imagine the two are identical. The all-you-can-eat style breakfast buffet was a delight. I took great amount of pleasure in being able to have a hot breakfast featuring sausage, egg and bacon. There was a huge amount of choice including cereals, yoghurts, fruit and pastries. There were also a selection of teas as well as the usual Disneyland Paris coffee. 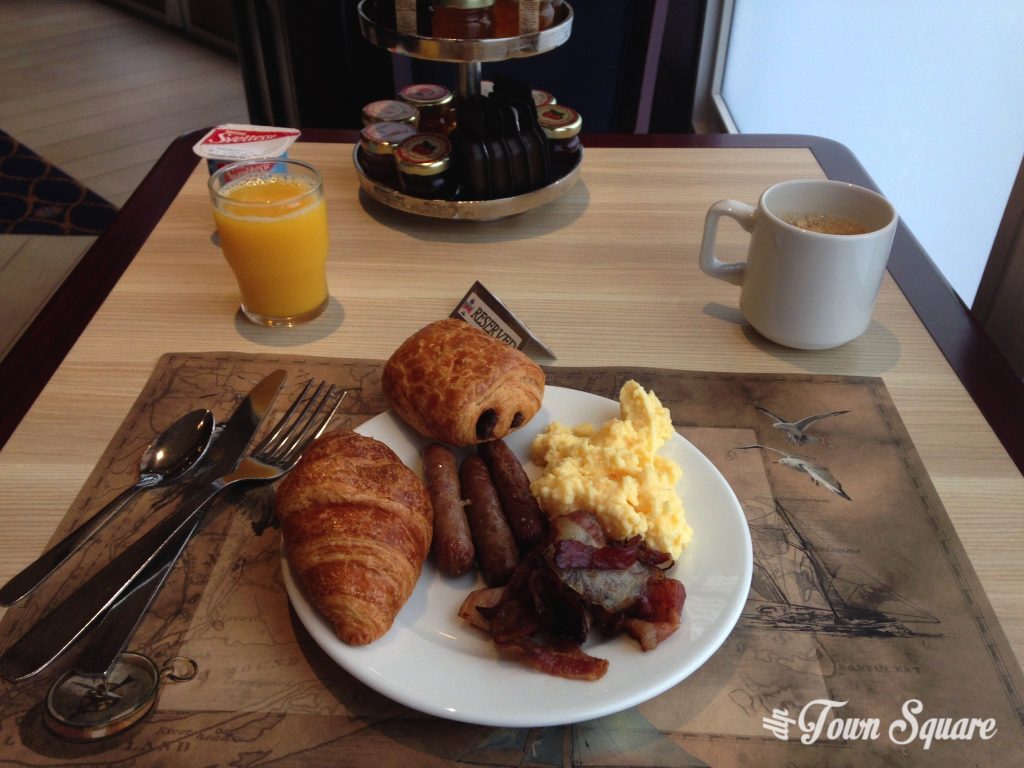 Overall, I thoroughly enjoyed my Disneyland Paris breakfast, and wish to extent my thanks to all the Cast Members that work breakfast for being a delight at such an early hour!

The check-out procedure was, as was everything else in this hotel, extremely simple. I walked down to the lobby with my case. Visited the desk, handed in my key card and that was that. I then went to the left luggage room (outside the front entrance of the hotel) to deposit my bag ready for the bus to the airport a little later on in the day. A process that could not be simpler.

The Newport Bay Club is an outstanding hotel, everything is extremely close to each other and has real touches of Disney magic. The Cast Members in the hotel have made everything exceptionally easy. The hotel has gained a star, and boy does it show. Before this stay, it was hard to see myself ever staying in a Disney hotel again; it is now difficult to envisage me staying anywhere else. 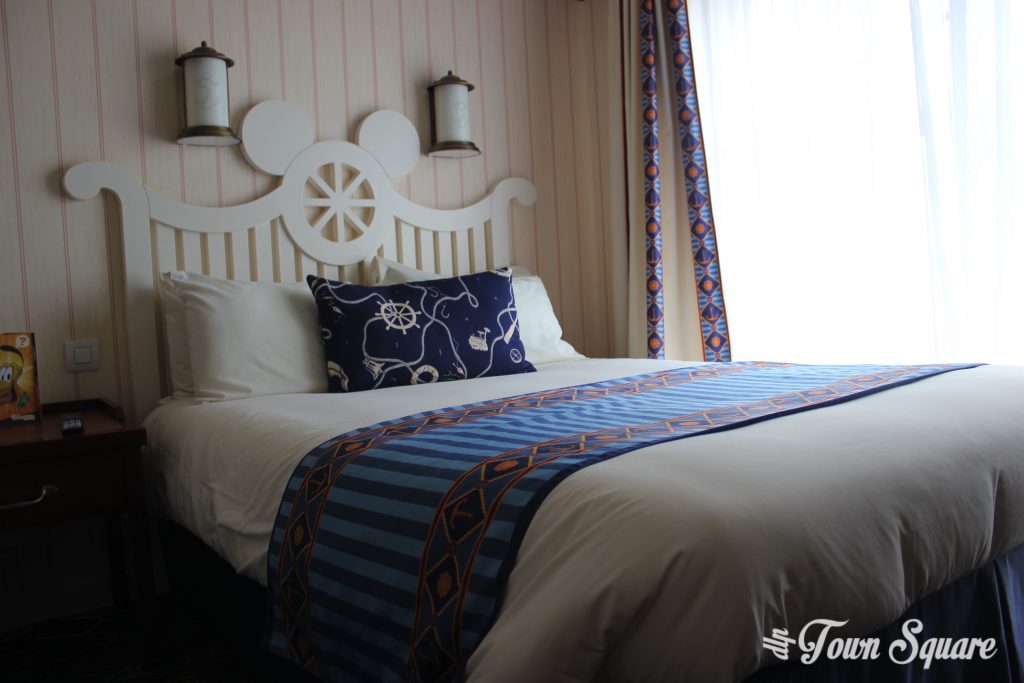 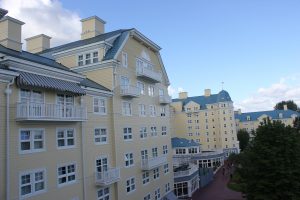 I was converted to off-site hotels many many years ago. My last stay in a Disney hotel was in 1999, and whilst I had looked