On Friday 18th May, Disneyland Paris held the very first event for their new influencer community 'InsidEars'; the event, called InsidEars Ready 2018' gave a glimpse into the plans that the resort has for 2018 and beyond.

The event was largely seen as a success with exciting resort developments being announced, clarifications around false rumours as well as details into operational items that contribute to the enjoyment to our favourite destination: Disneyland Paris. This truly was the perfect way to learn even more about a place that we all love.

The first big announcement of the night was that the Discoveryland Theatre will be returning in October 2018 with a new, for Disneyland Paris, show: Mickey’s Philharmagic. The show has already been a hit in international Disney parks including, most notably, the Magic Kingdom at the Walt Disney World Resort.

The show is both loved and adored by fans and is a welcome addition to the Disneyland Paris line up. It is also wonderful to see this theatre, which is actually one of Disneyland Paris’s best, back in use with a new and exciting show that is likely to be loved for years to come.

In 2011, the Molly Brown returned to the Thunder Mesa Riverboat Landing attraction in Frontierland. Since then, the Mark Twain has been missing; we have been able to see the Mark Twain in a very sorry state in the dock which was both disheartening and gutting to see.

However, no longer: in 2019 the Mark Twain will enter into refurbishment and will return to service in 2020 on the Rivers of the Far West. This is wonderful news, seeing both these wonderful riverboats on the river will be a sight to behold and is something that dreams are made of. The story of Frontierland and Thunder Mesa comes to life thanks to these boats, long may that continue!

The first being that Ratatouille: L’aventure totalement toquée de Rémy will be taking a four-month refurbishment between August and December 2018; the reason for this being that the connection on the floor has become an issue during the course of operation. This means that the Rat mobiles become disconnected and causes an attraction shut-down; to solve the issue the Imagineers will need to replace the floor of the attraction.

One of the big features of the new-look Big Thunder Mountain is the ‘explosive finale’. This fun final lift hill includes projection and smoke effects. However, the smoke has been missing in recent weeks and months; this is due to a leak underneath the lake of the smoke valve. The issue in fixing this is that the Disneyland Paris technical teams are having to find a way to fix it without draining the lake, however, if this is not possible there will be no alternative.

Colonel Hathi’s to close and be reimagined

Perhaps one of the more surprising announcements of the night was the closure of the Colonel Hathi’s Pizza Outpost restaurant (dates TBC). We know very little about why this will be occurring and what the new offering will be. We will just have to keep our eyes and ears open.

One thing that I do hope is that we do not lose the wonderful theme inside. Whilst the restaurant does suffer from average food quality (at best), the theme is second to none and it would be a shame to not have this any more.

It is widely acknowledged that Disney Village, Disneyland Paris’s entertainment district, lacks charm. Whilst things have been getting progressively better with the introduction of Five Guys and Vapiano, we do still have a way to go. Luckily Disneyland Paris also recognises this and are putting together a redevelopment plan. The plan is about 90% complete, and when completed we will learn more about the excitement that lies in store.

Daniel Delcourt did discuss how Disney Village is often compared to Downtown Disney in Anaheim or Disney Springs in Walt Disney World. He suggested that these comparisons are perhaps not best suited to the situation and that Disney Village is its own unique destination and should be treated as such.

In 2017, and with very little fanfare, the Rendez-Vous Gourmand was launched at Disneyland Paris. The event ran for a little over two weeks and was a success capitalising the European love for food and drink. The 2018 edition will be extended both in the number of stands and duration. Taking place between the end of July to the end of September and expands on last year’s theme of French Regional Food and Drink to include a new series of chalets from European nations including Belgium, Spain and Italy; France will also be expanded with representation from the Antilles.

This expanded festival will be much loved during the summer months and straddles main events such as the Marvel Summer of Super-Heroes, the Disneyland Paris Magic Run Weekend and the Disney Loves Jazz party.

Disney fans love to buy nice things. The Merchandising team produced a wonderful presentation that very quickly (but comprehensively) took us through all the upcoming things that we can be excited about.

Firstly, the Pirates of the Caribbean book that you may have seen circulating on social media will be put on sale this Summer in the resort. This book is a wonderful creation and is full of love for the attraction.

Mickey’s 90th Birthday has a full range of merchandise including a new souvenir key (on sale 18th November 2018, 1928 copies), a bow tie and a whole range of ears and clothing.

There are also exciting ranges of figurines on their way including a wonderful Chip ‘n’ Dale popcorn figure with original 1992 Disneyland Paris imagery – what fantastic attention to detail this is. The Castle (under the cloche) souvenir will be remaining on sale at Disneyland Paris and will be joined by a fantastic Tower of Terror model in the same mould.

On November 18th 2018, Mickey Mouse turns 90 years old. To celebrate Disney Parks around the world are inviting guests to join the “World’s Biggest Mouse Party”. At Disneyland Paris this will take the form of cupcakes in each land with Cupcake Girls expanding the story of Mickey right in front of your very eyes.

As the 90th birthday celebrations span over 3 months (October 1st – January 6th), the Halloween and Christmas festivities will be involved and will feature some special touches.

This Halloween, a new float will be added to the popular Halloween Cavalcade; the float will be themed to Phantom Manor and will feature some very special surprises for guests.

Then, during the Christmas season, prepare to be surprised during Mickey’s Christmas Big Band. The grand finale of the spectacular show will see a huge surprise take place outside of the theatre on unsuspecting guests whilst also being live streamed to the guests sitting inside.

Phantom Manor to return this Autumn

Whilst we did not get a lot of news regarding Phantom Manor (some surprises do need to be saved), we did learn some more thanks to a little video from Imagineer, Tom Fitzgerald.

This renovation is very exciting and will include new audio installations, new illusions and some very exciting work on the audio-animatronics.

For fans of the Pirates of the Caribbean book that releases this Summer in Disneyland Paris stores, there is also a volume planned on Phantom Manor.

A wonderful evening of surprises

The first InsidEars Ready event featured a lot of surprises. It was a night of excitement in the Disneyland Paris fan community, and hopefully, we learn more as we go through the year. This year is being set up to be one of the most exciting yet!

My thanks go to the communications team at Disneyland Paris for the invitation to this fantastic event. 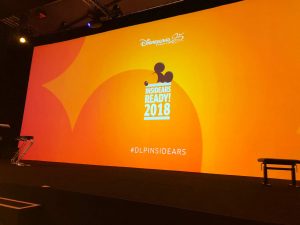