Halloween, since 1997, is one of Disneyland Paris’ staple seasons. So much so, that some guests often plan their years around a visit at this special time of year. Recent years has seen the massive expansion and successful re-imagining of the season, but somethings always remain the same. The Villains are back and this time Maleficent is taking over Sleeping Beauty castle – this makes perfect sense in two ways; the first of which being that Sleeping Beauty castle deserves some treatment by Maleficent during Halloween, after all the evil villain does play a large role in the classic Disney film; the second being that the DVD and Blu-Ray release of Maleficent is due at the end of October, this is a small bit of synergy from Disney. 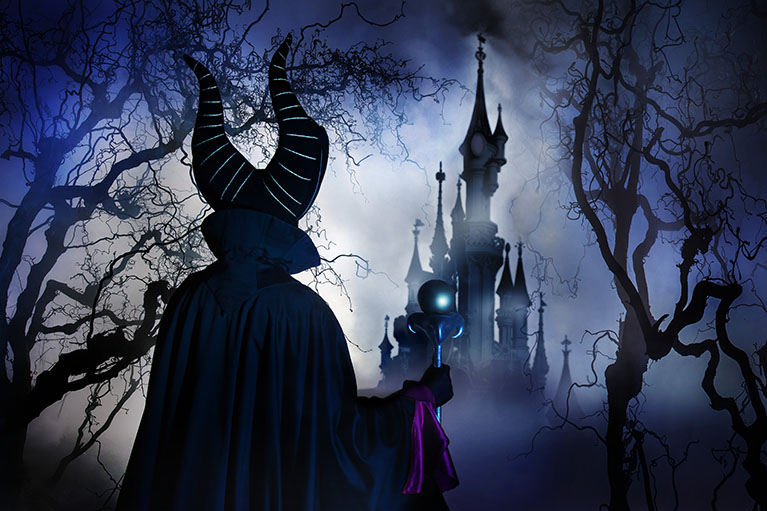 With Maleficent in the leading position, the Disney Villains will be the unmissable stars of Disney’s Halloween Festival.

Every day, the Disney Villains will be happy to have their photos taken with guests to immortalize this fearsomely funny occasion forevermore.

Together with Maleficent, the Disney Villains will parade around Central Plaza to welcome guests.

This is possibly the most exciting new feature of the 2014 celebration, especially if the Spring Promenade is anything to go by. We’re promised that this promenade will also provide for a photo opportunity. I’m thinking that this could be a hybrid between the celebration train and the aforementioned Spring Promenade. A few minutes of a show, some dancing to Disney Halloween Classics, then a photo session for 15-20 minutes before dancing away. This could be repeated several times a day. Timings have not been confirmed, but I’d be surprised if this was not the case.

In the Sleeping Beauty Castle Courtyard, Maleficent and her accomplices will create an unmissable spectacle, which will be the place to be seen!

This year, Maleficent will cast a spell on the Sleeping Beauty Castle and the Disneyland Park and will invite some of the Disney Villains to join her in the Castle Courtyard.

That is how huge brambles mysteriously appear in the Castle Courtyard. Shaped like the famous horns of Maleficent herself, these brambles form the outline of an imposing dragon.

As night falls, the bramble will take on a more disquieting look, immersing guests in a universe of bright, unsettling colours.

Another new and exciting feature of the 2014 celebrations. We have always been used to the villains courtyard in Fantasyland during Halloween, this has been the place to meet all your favourite Disney villains, this year it looks as if more will be done than ever. The iconic bramble bushes from the films will be placed around the Castle courtyard providing a villainous backdrop to all your Disney Villain photos. If done well, this will certainly look fantastic and could add an eery atmosphere to this part of the park. I’d be very impressed if smoke came out of the brambles – I’m getting the chills even imagining that.

To celebrate Halloween and to provide guests with a unique party, Mickey and friends will offer guests a cavalcade specially dedicated to the Harvest festival, and have naturally been inspired by the autumn and Harvest theme.

Several times a day, Mickey and friends will parade in front of Sleeping Beauty Castle and along Main Street, U.S.A., surrounded by dancers wearing autumn colours.

This year, the lovely Daisy will open the cavalcade. The Three Little Pigs and Horace will join Mickey’s Halloween Celebration on their brand new float “Raise the Rafters!”.  Surrounded by owls, black cats, spiders and bats, the Three Little Pigs, Horace and Clarabelle will dance to country music in front of their farm. A tree and an enchanted mushroom will come to life as if by magic.

As for the Disney Characters, they will be showing off their most stunning seasonal costumes. Donald will explore the wonders of autumn in a world made of straw and pumpkins, together with his inseparable nephews Huey, Dewey and Louie. Meanwhile, Uncle Scrooge will bring up the rear, determined to keep determined to keep careful watch over a strange pumpkin that appears to be worth its weight in gold…

Mickey and Minnie pay homage to the Harvest season from their huge horn of plenty, filled with autumn leaves, fruits and pumpkins. Behind them, Chip and Dale, accompanied by the charming Clarice, have taken advantage of the Harvest to steal and hoard as many hazelnuts as they can lay their hands on!

The hugely successful cavalcade returns! Last year Disneyland Paris launched a Halloween harvest festival themed cavalcade which was a real success. The floats looked great, the music was catchy. Much like the Christmas Cavalcade which launched in 2012, we were certain that Mickey’s Halloween Celebration would be extended year or year. This has proven to be the case – not only that, but a slight re-organisation of what we already had has taken place. A new float, named Raise the Rafters will be added featuring The Three Little Pigs, Horace and Clarabelle. Clarabelle made her Disneyland Paris debut last year at the opening of the Halloween festival and has been used in celebrations ever since. Such is the popularity of these rare characters that an entire float has been dedicated to them. It’s great to see these classic characters returning to Disneyland Paris. As Clarabelle is moving to her float, a new opening character has been named: Daisy. 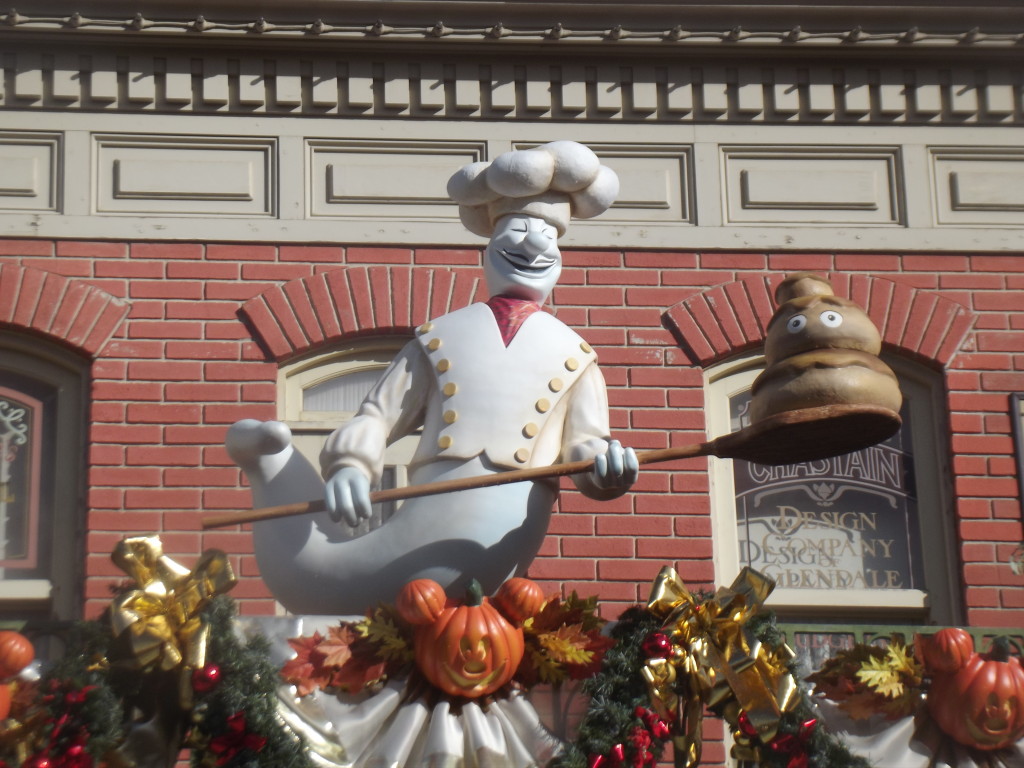 They thought they could keep a low profile throughout Halloween month, but guests will only be able to unmask them and immortalise them in a photo!

The ghosts of the former residents of Main Street, U.S.A. will use Halloween as the perfect opportunity to make their grand appearance. Delighted to be able to make an appearance during Disney’s Halloween Festival, they will take over Main Street, U.S.A., trying to blend into the scenery. The Park’s apprentice ghost hunters will be invited to unmask them, armed with their cameras.

The Main Street decorations sound to be returning – which can only be a good thing as they have been a real success in recent years. The ‘dead’ citizens of Main Street USA will come out and bring life to the street for the month. Spotting all the Ghosts on Main Street USA becomes almost like a game, and one that everybody enjoys!

Character Meets returning are: Minnie’s Halloween Costume Corner, Goofy Bonbons and Jack & Sally’s Cemetery. Don’t forget to say ‘Trick or Treat’ when you meet your favourite Disney characters – you never know what might happen! All these meets are fantastic and ever popular and so it’s great to see them return year on year.

Disney’s Halloween Festival also includes the famous Halloween Soirée on the 31st October 2014 between 20:30 and 01:00. Disney promise a “hellish” atmosphere with our favourite Disney characters coming out to play. The grand finale to the evening will be Disney Dreams!. Please note that this is a separate ticketed event, tickets are available now for €41 per person. Entry to Disneyland Park on the night will be permitted from 17:00.

Overall, this year’s celebration is very exciting; after last year’s Harvest theme, we’re returning to the roots of a Disney Halloween: The Villains. The focus on Maleficent makes a lot of sense taking into account her massive popularity and the fact that Disneyland Paris features Sleeping Beauty Castle. Anyone visiting this Halloween should have a spooktaclur time. 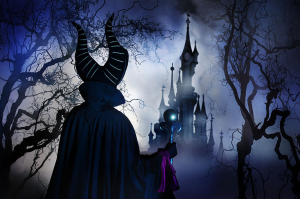 Halloween, since 1997, is one of Disneyland Paris’ staple seasons. So much so, that some guests often plan their years around a visit at this