Disney Stars on Parade is the new daily encounter with the Disney characters in Disneyland Park at Disneyland Paris. This new parade is full of bounce, fun and excitement and marks a real change in parade style for Disneyland Paris. Out are the old floats that have been present in Paris for ten years and in are new and dynamic floats and a soundtrack that is so fun it’ll have you bopping away and fill you with absolute joy. These eight new floats have a unique soundtrack and a unique look.

The initial float of the parade is striking. It sets the tone that this parade is very different from anything that we have
seen before and is impressive. A giant book comes down the street and on either side Mickey and Minnie wearing the now famous ‘steampunk’ costume.  These costumes are wonderfully detailed and look like something that has come straight out Discoveryland.

Mickey and Minne are followed by Goofy who is floating up and down on a jetpack who is followed by a giant telescope with Chip and Dale.

Each character on the float, much like the entire parade, are located up high up allowing everybody to get a fantastic view of the parade no matter how far back they are in the crowds, a fantastic initiative and should cut down in the last minute kids on shoulders or pushing through to the front. 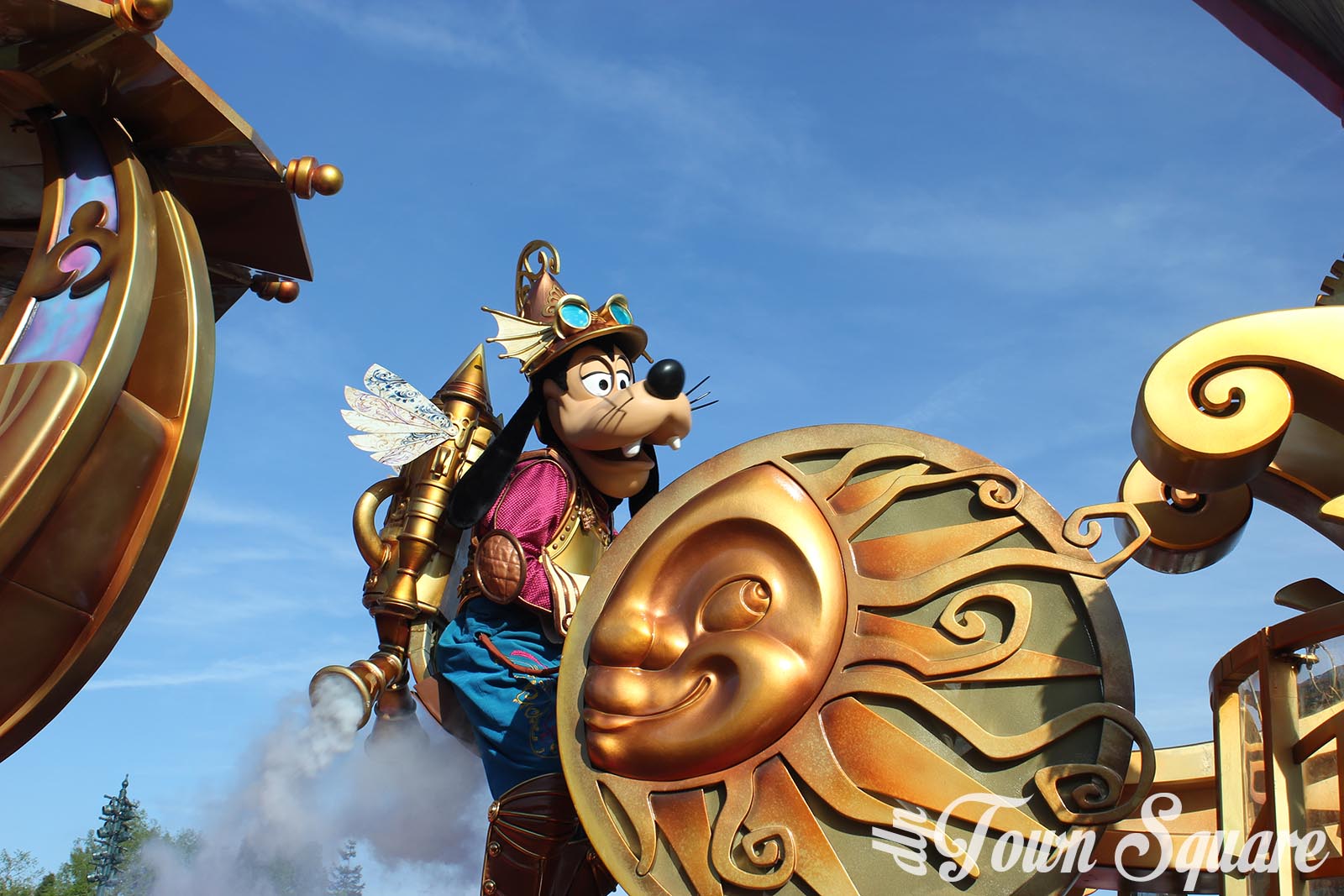 This particular float is absolutely stunning and really does set the tone for a parade that is totally unique in any Disney park – a parade based in Steampunk designs of our favourite films. The problem? Whilst this float does exactly that, it falls apart quite quickly before re-picking it up for the dragon. Whilst this is not a problem – the parade is still fantastic – it does take away from a global theme which this parade does not have.

This Toy Story inspired float has one of the most impressive kinetic effects. Whilst the characters are very much front and centre in any parade, this parade has skilfully allowed performers to bring the wow factor as well. The star of this float is the giant wheel with performers rotating around to an incredible height. In many parades, this moment would be the highlight, however in this parade it is relegated to the place of a ‘cool moment’.

The characters themselves are the usual Toy Story affair, Buzz, Woody and Jessie can be found in, or around, the float which is colourful and fun in design. 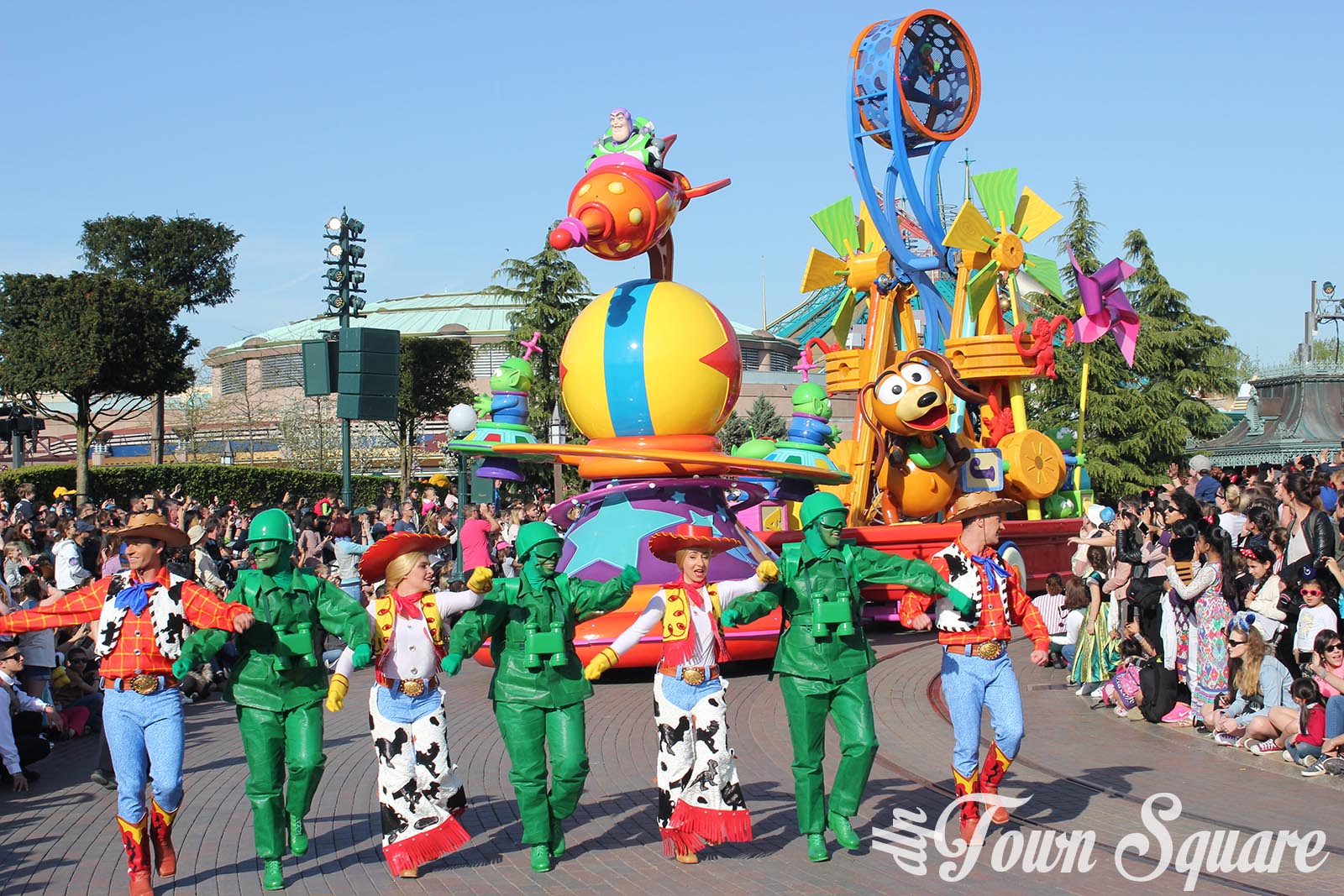 If a float was given a land as an identity, this float encapsulates Adventureland. The dancers dressed in fantastic outfits which are spellbinding and the choice of characters are very much a Disneyland Paris classic. The issue here is not so much character choice but the lack of Baloo. Baloo is present as a static element of the float and not as a character. When we think back to Disney Magic on Parade, Baloo brought a lot of fun to that segment and is a real miss on this parade. 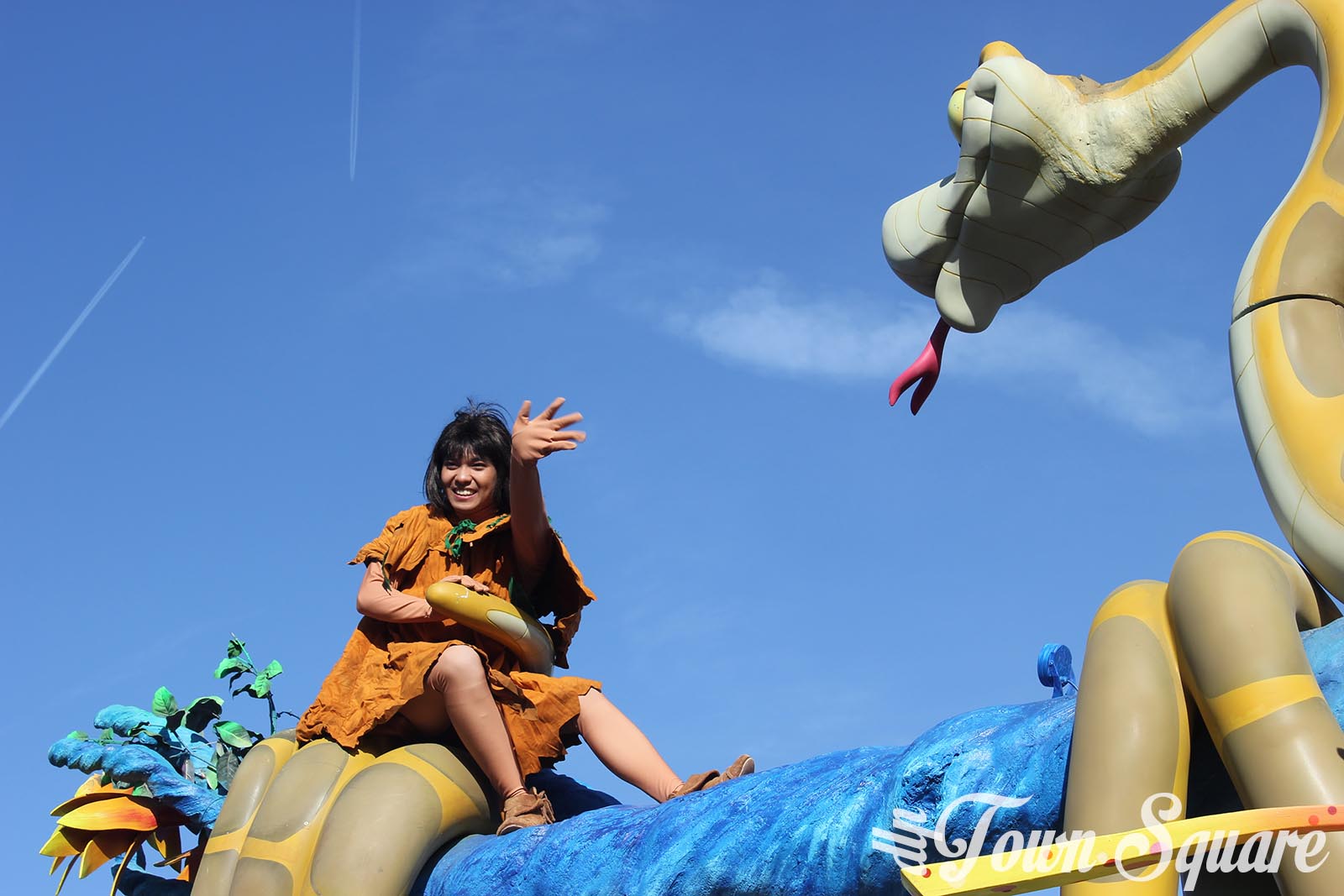 The Lion King/Jungle Book split is a tried and tested formula at Disneyland Paris and falls rather flat in this parade. Where Disney Stars on Parade is dynamic and fun, this float is static and lifeless. The float itself is not overly striking and does not really incite any form of excitement. The fantastic choreography and music really does carry this segment through that feels like it is only there because of the popularity of the franchises.

The biggest issue with this float though is the costume for the character of Mowgli who looks more like Fred Flintstone than the intended Jungle Book. This is an easy issue to fix however and I am confident that a solution will be worked on.

This is one of the breathtaking floats of the parade. From seeing the Lost Boys dancing in front of the float the imposing swinging pirate ship with Peter Pan. This float is a delight for the eyes, Captain Hook sits on top of Skull Rock and has a chair that can move from side to side meaning that the entire audience can get that perfect view of him, this is followed by Peter Pan hoisted extremely high on a pirate ship swinging backwards and forwards.

Discover Imagination takes on a dreamlike look with the giant moon and skull rock and is a true standout of this parade. 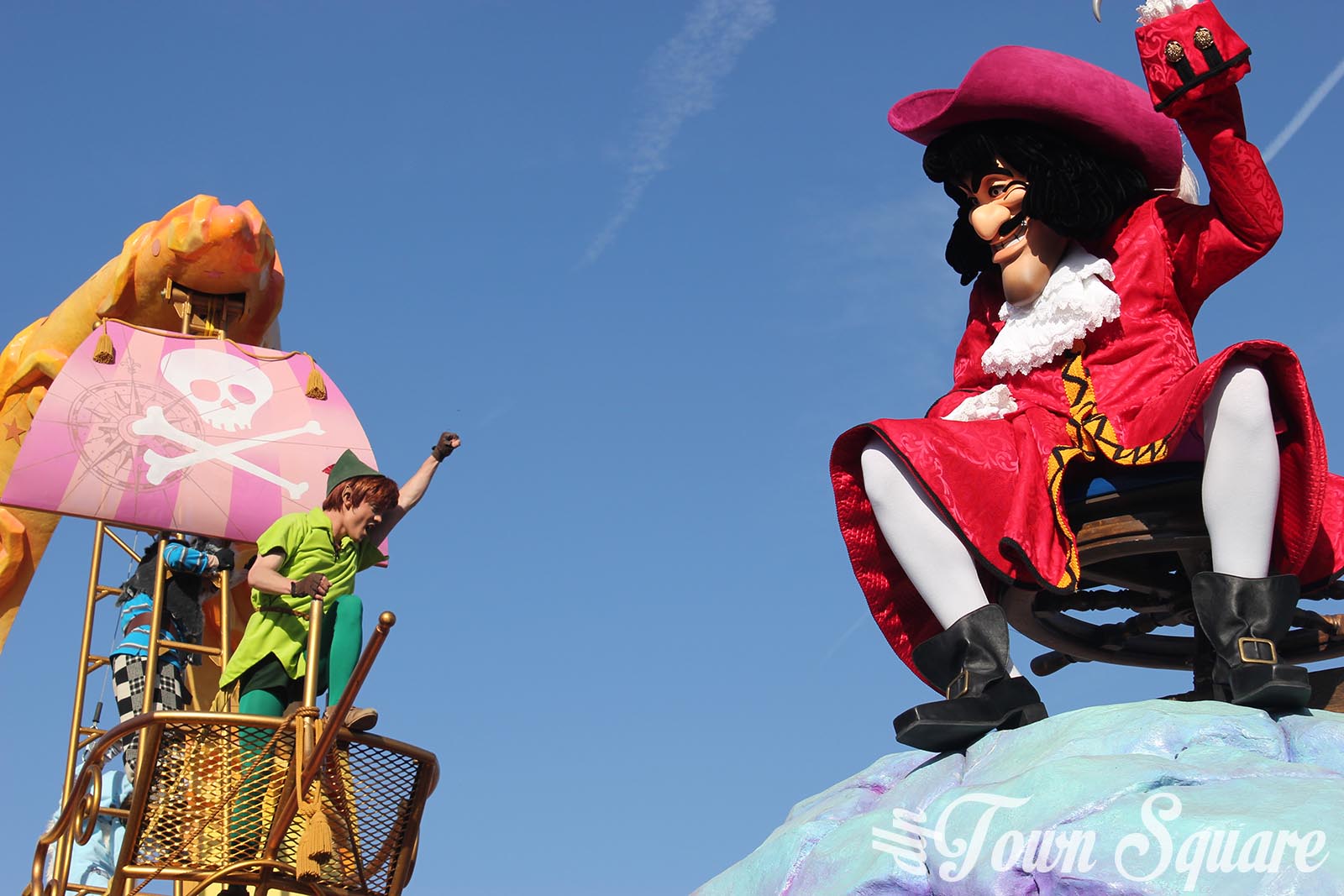 Perhaps the least impressive of the Disney Stars on Parade units in the Discover a New World section and the only reason for this view is that it feels rather static. Essentially, the float is a giant Crush that does nothing except speak a few lines. Whilst the Crush does look very good, the parade is extremely kinetic and this float simply isn’t.

On the other hand, however, the dancers that go with this float are in some of the most beautiful costumes designed for a parade. They scream ocean and do look stunning. 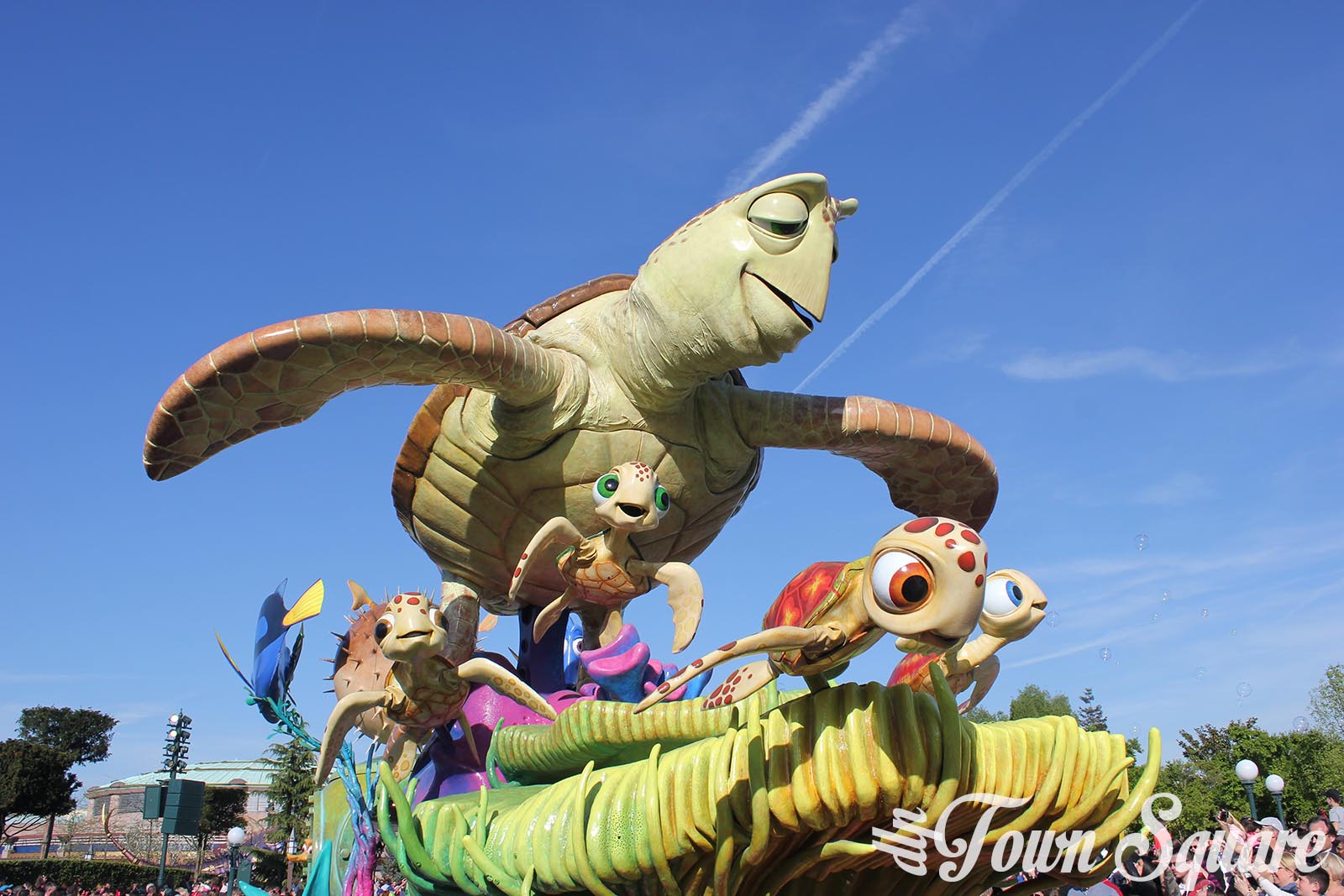 The centrepiece of this parade is undoubtedly this particular unit. Maleficent returns to Disneyland Paris in this wonderful steampunk look. The float, the performers and the music are spot on in this fantastic float that does quite literally steal the show.

Whilst the fire effect is on and off (and you have to be quite lucky to see the fire perfectly), the float itself is imposing and magnificent, this is a work of art and its pleasing to hear the crowds gasp as they see her for the first time. The fire effect adds a whole new level to this, the bright yellow flames are incredible and deserve every single clap of admiration they receive from guests. Moments like this make holidays and force people to come back and tell their friends. 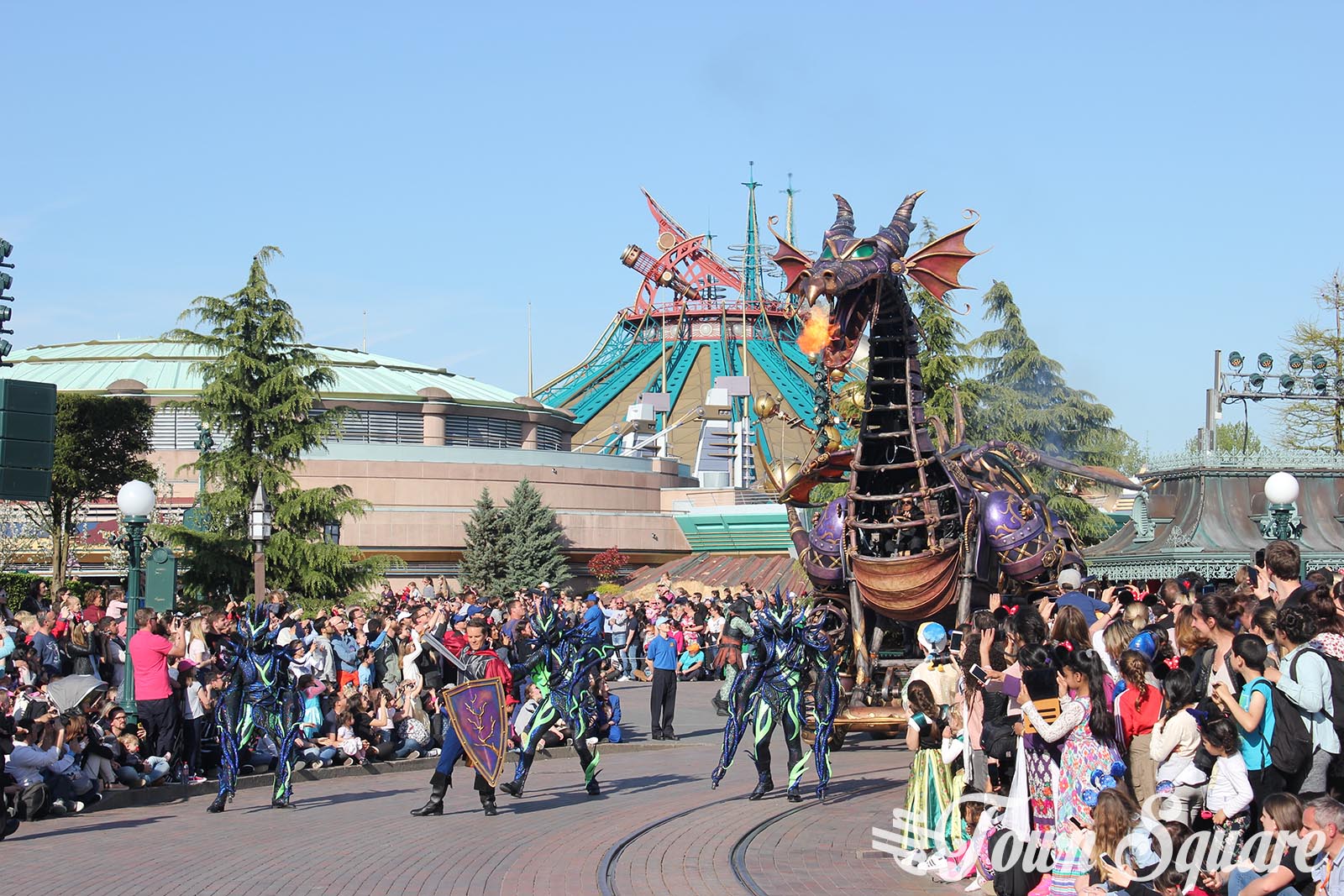 It’s rare that one float missing will significantly weaken the parade, but if this float were to be removed the parade feels much less impressive and would leave you feel disappointed. This is a testament to the design teams who have worked on this piece both in Paris and in the US.

After the villain, the heroines. The princess carriages from Disney Magic on Parade return for Disney Stars on Parade providing both continuity and similarity. There is not much to be said about this particular section of the parade as it is so similar to the previous offering at Disneyland Paris. There is a strong rumour that the princesses will be getting their own float in the next year or so and it is very much-needed. 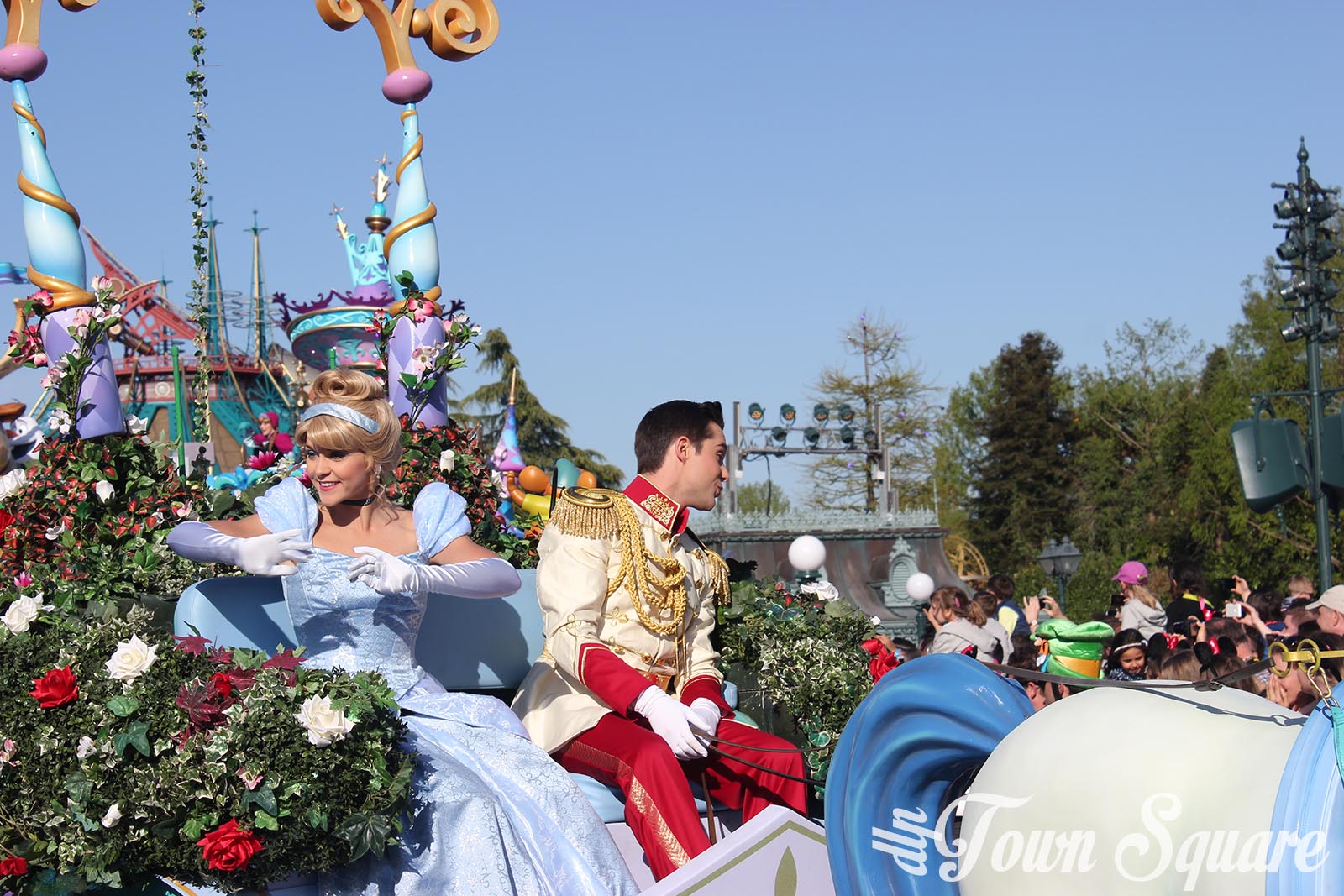 Nevertheless, this is still a wonderful part of the parade and the new music and choreography do make for a pleasant moment and it simply would be impossible to have a Disney parade without the princesses, the two just go together perfectly.

The grand finale of the parade is Frozen themed. This float is simply magical, it feels both like it has come straight out of the film and toy-like. This is the first time that both Kristoff and Olaf have been on parade at Disneyland Paris making this a significant attraction in itself. This float is simply fun. Kristoff leads it out, Olaf sits atop of Sven and the royal sisters are on a castle balcony. As Frozen simply gets more and more popular, it was about time that the film received a dedicated float and this one is perfect. 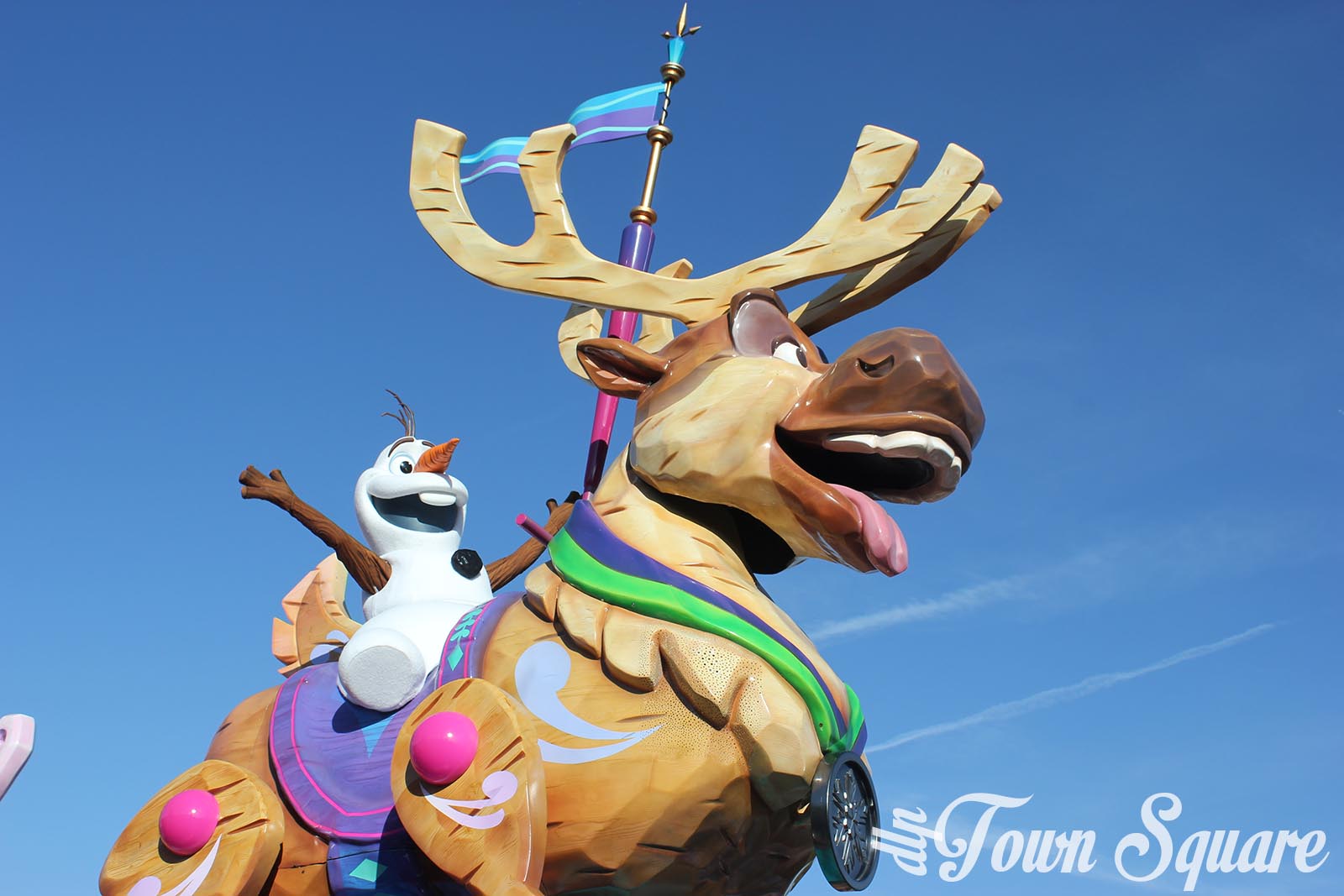 As the grand finale, the float also sends snow falling in the air and covers guests as they wait for it to pass by or follow the end of the parade. This effect really does add a lot in atmosphere and gives Disney Stars on Parade a magical send off.

Any new parade needs a new score, and Disney Stars on Parade is no exception. Whereas Magic on Parade had one song playing in a loop throughout the entire parade, this new offering has a full score that accompanies each float making it more story-like in nature.

The main score Lost in the Magic is spectacular, bouncy and fun (and now available on CD within the resort) and as the parade progresses each float has a unique sound with echoings of Lost in the Magic throughout to create a truly linear score. It can only be hoped that one day Disneyland Paris allow us to buy the entire score just like they did for the Once Upon a Dream parade which had the same musical feature.

This parade is energetic and has music to match, this song will be a Disneyland Paris classic.

Disney Stars on Parade is a new and fun experience to be added into the park, with the emphasis on the fun. Parades are always highlights of days and trips and this parade will be no exception, it is possibly one of the best parades produced by Disneyland Paris and leaves the entire crowd smiling, an accolade which is truly special.

Is this Parade perfect? No. Is this Parade very strong? Almost certainly yes. Is it one of the best parades we’ve had at Disneyland Paris? I would say so. Disney Stars on Parade is a huge improvement on Disney Magic on Parade, it’s toe-tapping, smile inducing fun. And after all, isn’t that what it’s all about? Mission very much accomplished and bravo Disneyland Paris for trying (and succeeding) at something very different. 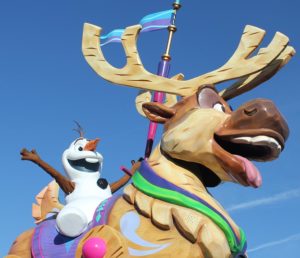 Disney Stars on Parade is the new daily encounter with the Disney characters in Disneyland Park at Disneyland Paris. This new parade is full of