A new game has launched in the Crush’s Coaster queue line in Disneyland Paris. This game seems to offer you a new interactive Disney experience whilst waiting in line for one of Disneyland Paris’ most popular attractions.

This simple game sees guests operating as Crush and moving him by using their finger on their mobile device. Access to the game is via a WiFi network named ‘DLRPCrush’, once connected you will be redirected to a dedicated webpage in which you will have access to the game. The following is information directly from Disneyland Paris as to the aims of the game and how it all works:

What is it about?
Crush’s Coaster, the Game is an interactive mobile game for smartphone and tablet, available in French and English. Visitors do not need to download the game on their smartphone or tablet, they directly play from their web browser.

What is the purpose of the game?
The mission is to help Crush become the best surfer in the East Australian current and avoid obstacles while gathering a maximum of starfish.

The program includes 5 levels with increasing difficulty and between each level, riddles to solve with their family or friends.

In level 1, Crush has to reach 4000 points to get to the next level. The player has to avoid boulders and running speed in the game area is very slow.

In level 2, Crush has to reach 9000 points to get to the next level. The player has to avoid jellyfish and running speed in the game area is slow.

In level 3, Crush has to reach 15000 points to get to the next level. The player has to avoid mines and running speed in the game area is average.

In level 4, Crush has to reach 22000 points to get to the next level. The player has to avoid sharks and running speed in the game area is fast.

In level 5, there is no limit of achievable points; the player has to make a maximum of points possible until he touches a foe or an obstacle. All foes and obstacles are present in this level and running speed is going faster and faster.

When will the game be available?
Crush’s Coaster, the Game will be available in September 2014.

Where can visitors play?
Visitors can play at Crush’s Coaster, the Game exclusively in the covered exterior waiting line of Crush’s Coaster ride thanks to a free Wi-Fi network.

Do we charge for the game?
The game and the connection to the Wi-Fi network are completely free for all visitors.

Is it possible to navigate on the Internet with the Wi-Fi network?
The Wi-Fi network is exclusively dedicated to the connection to Crush’s Coaster, the Game.

Also included in this release were some images of the game in action:

The game sounds simply enough to play and should provide a distraction to guests in the Crush’s Coaster queue line – is this the start of a new generation in Disneyland Paris queue line interactivity? This is possibly a simpler, cheaper option than to create truly interactive queue lines whilst offering an element of interactivity. Either way, this is a step forward for Disneyland Paris. It is perhaps a step towards park-wide WiFi, but not the sort of WiFi we were expecting. In a queue such as Crush which is devoid of any form of interest until guests enter the interior queue area, this can only be seen as a good thing; however, what we do not need in Disneyland Paris are phone zombies. The parks are a family destination – would mobile games kill family interaction? We already see this in homes across the world, why should Disneyland Paris be any different? What we really do not need is phone screen lights lighting up queue lines in Pirates of the Caribbean. Though perhaps this is a move that will liven out exterior queue areas?

The only way to see if this is going to be a success is to go to Disneyland Paris, stand in the queue and observe people – this you will be able to do when the game begins testing in September 2014 at the Walt Disney Studios Park in Paris. 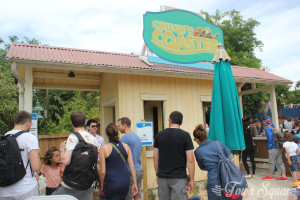 A new game has launched in the Crush’s Coaster queue line in Disneyland Paris. This game seems to offer you a new interactive Disney experience