Avengers Campus at Disneyland Paris opens 20th July 2022 – Everything you need to know!

We finally have a date! Avengers Campus at Disneyland Paris will open on Wednesday 20th July 2022.

We finally have a date! Avengers Campus at Disneyland Paris will open on Wednesday 20th July 2022. From then, we can join the Avengers at their European Headquarters to train and join the team. This exciting day also sees the start of the wider expansion of the Walt Disney Studios Park which will see the addition of a lake and a land dedicated to Frozen.

So, what do we know about the land so far? Let’s dive in and find out!

The action-packed rollercoaster will see recruits (that’s us!) team up with Iron Man and Captain Marvel. Once we enter the Avengers HQ building, we’ll meet Iron Man who will give us our briefing and send us away in a special Stark Tech vehicle designed to lure the threat away from the earth.

Take a tour of the special Worldwide Engineering Brigade European factory. The gadgets that are made in this factory turn ordinary people into some of Earth’s mightiest heroes. Tiny problem, they seem to be out of control and you need to help stop them. This new attraction is a brand new game style adventure – the likes of which we have never seen at Disneyland Paris. Journey through multiple levels which will get progressively harder to help bring things back under control.

The first of two big restaurants in the Campus, the Stark Factory is themed to an assembly station for Howard Stark with many easter eggs for fans to explore including the Hulk Buster suit, designed by Tony Stark himself.

The food is an Italian pizza and pasta style restaurant with a desert-inspired by the Mighty Thor!

This buffet restaurant uses pym particles to grow and shrink food! You’ll be able to try gigantic pretzels and green beans (amongst others), and other dishes will be in a mini portion in order to allow you to sample a whole range of food items.

Pym Kitchen will also offer a fantastic range of drinks including a blue Chardonnay, a beer flight, wine in tiny vials amongst others.

More good news is that there will be a range of food trucks in the Campus offering a wide variety of food.

The Worldwide Eating Brigade will offer a range of Asian-inspired food including noodles and coconut balls.

The FANtastic Food Truck will serve Hot Dogs (original and vegan) with a range of sauces and toppings.

Gear up! You’re going to need equipment if you want to be part of the Avengers! This flagship store will see everything from Avengers T-Shirts to Funko Pops, to utilities to help your W.E.B. Adventure journey, or maybe even a spider-bot of your own to take home and use to help save the planet! It’s all here!

No visit to Avengers Campus will be complete without seeing some of our favourite super heroes and Avengers Campus Paris will be no exception! In the land you’ll be seeing Sam Wilson as Captain America, Okoye and the Dora Milaje, Ant-Man and the Wasp, Loki, Thor, and Black Widow.

In the Training Center you’ll get to meet Spider-Man, Iron Man and Captain Marvel. Your photos for this meet will really pop with a Disney Park’s first – a freeze-frame video sequence taken by 27 cameras around the room. Your photos will surely look incredible.

But wait! There’s more! You’ll get to see characters all day in the land roaming on the Avengers Deployment Vehicle as well as on the QuinJet platform for some special missions.

You’ll get to train and become members of the Wakandan Royal Guard, the Dora Milaje as well as have a awesome dance-off with Star-Lord and Gamora. You’ll also be able to meet some of the heroes at the Gateway Portal.

This land is surely sharing up to be absolutely incredible, keep an eye here for all the news as we count down to the big day! It’s coming sooner than you know it! 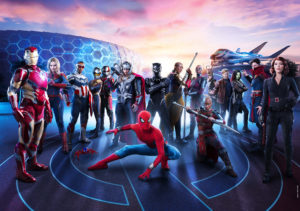 Avengers Campus at Disneyland Paris opens 20th July 2022 – Everything you need to know!

We finally have a date! Avengers Campus at Disneyland Paris will open on Wednesday 20th July 2022.