30 years of the convention: the social and economic benefits of Disneyland Paris

In March 1987 the famous convention was signed that signalled the official green light to begin construction on Euro Disneyland which was to be based around 30 minutes to the east of Paris. 2017 sees the 30 year anniversary of this landmark agreement and the official visit of François Hollande to the resort to celebrate the social and economic benefits of Disneyland Paris to the local and French economy.

In France, everything begins with a controversy, and ends with an anniversary.

Often it is forgotten the controversy that surrounded building this big entertainment complex. It was, to some, seen as an American invasion, a degradation of the environment in the quiet and rural Seine-et-Marne département. But who could have foreseen how much Disneyland Paris would benefit not just France, but the whole of Europe? For the 30th anniversary of the convention, Disneyland paris released a report that details these benefits.

The initial investment required was €5.06 billion to create the resort, the area surrounding the parks as well as the hotel complex and Festival Disney. This was topped up by a second park in 2002 which required €646 million. This money has created Europe’s number 1 tourist destination which receives more visitors per year than the Eiffel Tower and Château de Versailles combined which is aided by the fact that over 300 million people live within 2 hours of the resort

Part of the 1987 agreement also saw Disney develop a local community in close proximity to the parks. Today, Val d’Europe is home to 30,000 residents who are housed in 12,000  homes. The development has also seen the creation of a new university, lycée (high school) and even a hospital. Val d’Europe has been such a success that 93% of residents recommending living or working in the area. When discussing the benefits of Disneyland Paris, it is the local area that has benefitted most of all with the region receiving a total of around €60 billion, around 87% of the total amount raised by the development.

Disneyland Paris also takes its responsibility to its employees incredibly seriously. In fact, Disneyland Paris have increased the number of training hours it offers over the past 5 years (2010-15) by 30% (around 400,000 hours of training per year) and has a training budget which is 3 times higher than the national minimum required by French law. Additionally, 80% of promotions to manager positions are internal recruitment meaning that Cast Members at Disneyland Paris have good progression potential.

Whilst Disneyland Paris itself employs 15,000 Cast Members, the real impact of the resort is much wider. The resort is responsible for 22,000 direct or indirect jobs (indirect jobs being jobs that have been created because Disneyland Paris exists) which has also seen residency rise in the area. Upon the opening of Disneyland Paris, just 32% of Cast Members lived in the Seine-et-Marne département, this has now risen to 73% and 17% of Cast Members live in Val d’Europe. The resort, therefore, has provided real social change for the local area; once a domain of farmers, it is now a vibrant area for young people to live and work.

The tourist centre of France

30 years ago, Chessy was a small village in the middle of a farming area just east of Paris. Today, it is the heart of European tourism. The train station located at the heart of the Disneyland Paris development has become the number 1 TGV hub in France with 54 towns serviced from this station ranging from Marseille to Brussels and London. All these guests flooding into the resort also need a place to stay and so Disneyland Paris has become the 5th largest hotel hub in France (behind places such as Paris and Lourdes) offering 8,500 hotel rooms (5,800 of these are offered in Disney hotels) – 49.5% of the hotel capacity in Seine-et-Marne.

The resort offers much more than a place to stay and a theme park – Disneyland Paris is also 2 conference centres, a golf course and offers guests over 115 restaurants and shops.

Only 44% of visitors come from France, with 56% of guests from elsewhere in the world (although primarily from Europe). With such an influx of foreign visitors, it is important to note that 52% of the foreign guests to the resort take the time to visit the city of Paris. Guest mood is calculated by Cast Members who survey guests around the park, each year 300,00 of these are completed to allow Disneyland Paris to constantly evolve according to guest expectations.

It’s not just France that benefits!

Disneyland Paris is a motor of huge economic growth and change in France, and has even seen benefits across the whole of Europe. In its construction as a unique enterprise that has seen a partnership between public and private enterprises, it is right that it has been celebrated as such by the French president. The 30 years of economic growth is only a start, Disneyland Paris will continue to grow and bring even more benefits to France and Europe.

This information has been compiled from the excellent 25 ans de contribution économique et sociale report that was published by Disneyland Paris in February 2017.

I would like to extend a big thanks to Mathias Dugoujon of Disneyland Paris for his help in obtaining this report. 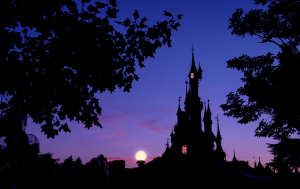 30 years of the convention: the social and economic benefits of Disneyland Paris