After the success of the Tower of Terror annual pass party, and the less well-received Marvel party, the third edition of the new Disneyland Paris Annual Pass nights focused around the end of the 25th anniversary celebrations. This simpler theme was clearly a safer option for the annual pass teams, but one that could be successfully completed with some effort.

The good news was that the lessons from the Marvel party were indeed learned, and that the Grand Final party was much better in almost every way. Does that mean that it was perfect? Of course it wasn’t, there is always room for improvement but significant changes were made. The focal point of the event were the characters although numerous small animations were planned, none of them stood out as something that were a ‘must do’ – with the exception of the Grand Final show at the end of the evening.

You may well have heard about the stampede at the beginning of the Disney FanDaze inaugural party. With the injuries that came out of that, you’d be expecting Disneyland Paris to never attempt this type of excercise again.

At the start of the party, all guests were funnelled into the Place des Stars to watch an introductory show. This worked nicely for the Tower of Terror night as the show was the focal point of the night. For the Grand Final, the focal point was the characters, who were all over the park. So people waited at the very edge of the allowed zone and then, at 21:00 when the introductory show ended, were released into the park with people running to their destinations. It was crazy, and dangerous as people tried to run and avoid children and wheelchairs. Something really must be done about this as it was particularly scary and dangerous. 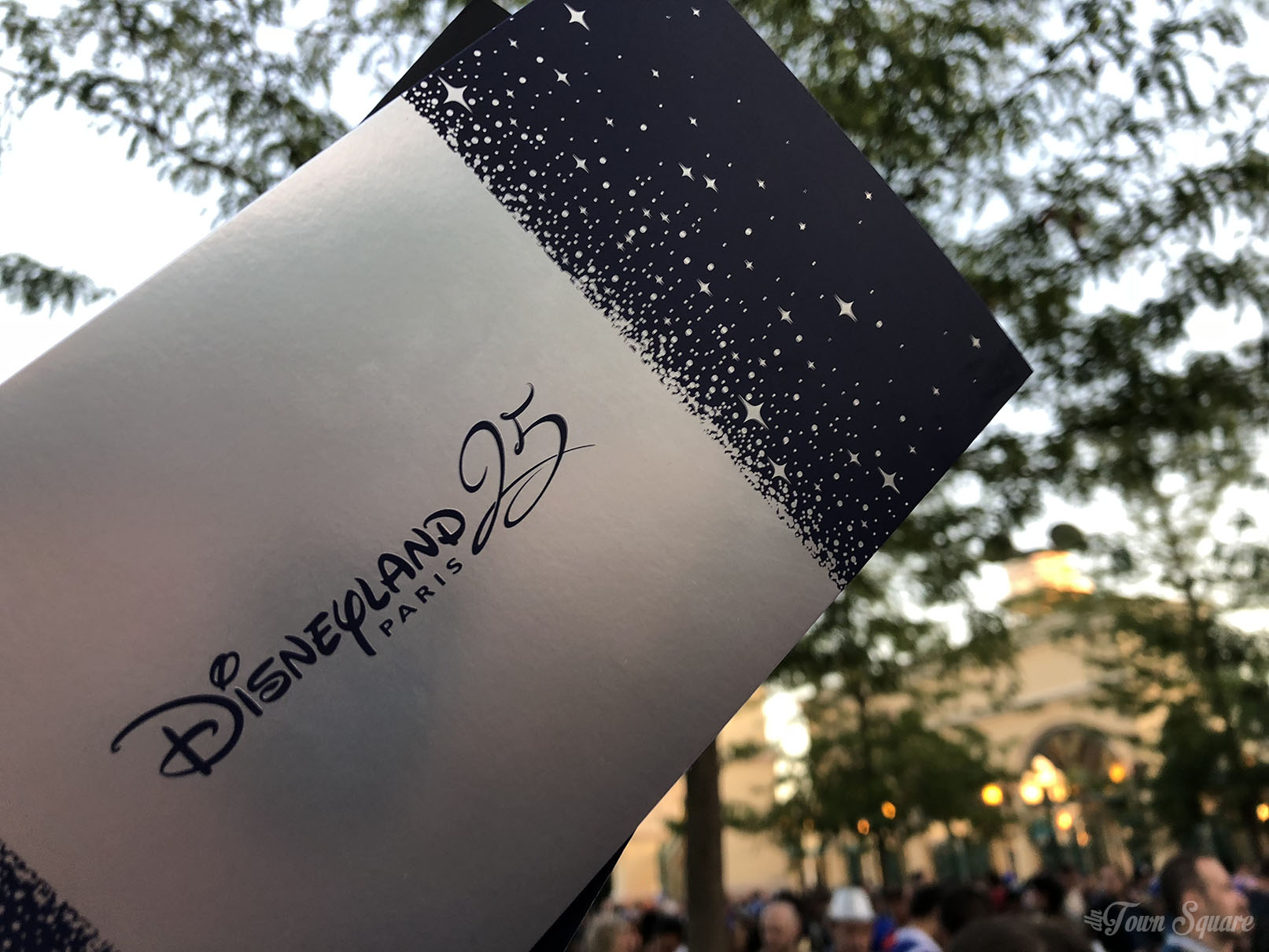 As usual with these annual pass events, a great deal of effort went into creating a beautiful programme design for attendees that will also make a nice souvenir of the evening. New for this event was the addition of a second event programme with a park map (in addition to the nicely presented copy). Attendees were also given a nice 25th anniversary pin which was placed inside a presentation box; a nice touch that added a lot of class to the gift.

An event for character lovers

What was particularly striking upon the programme release was the sheer amount of characters on the agenda. This event was designed in the aftermath of the successful Disney FanDaze event. There truly was a character to suit all tastes; from the classics of Mickey and his VIPs to Kuzco and Yzma with the super-rare Oswald and Ortensia too. 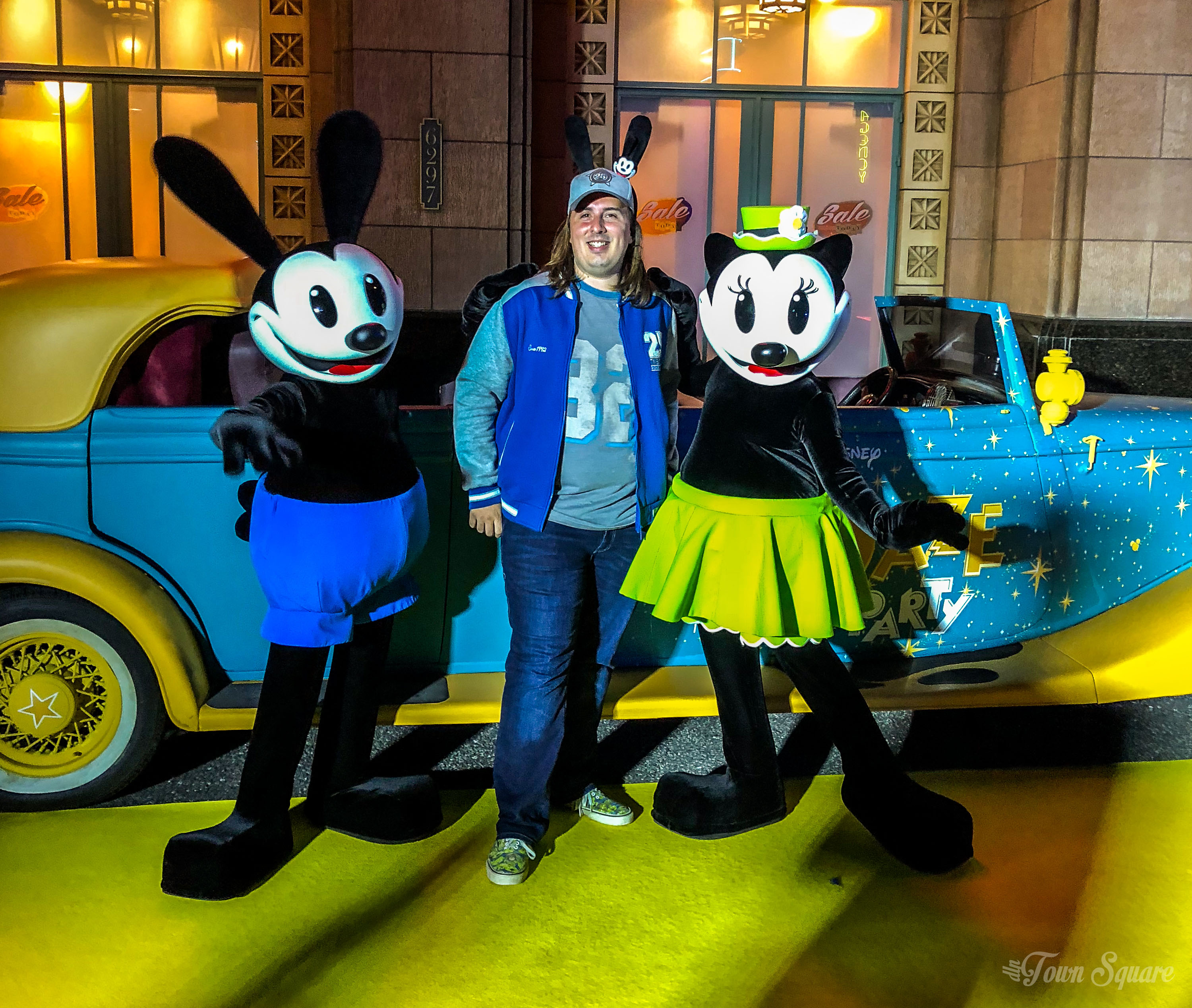 Character meets were designed to be quick (one photo on a phone and one PhotoPass+ photo per guest with no autograph signing), this allowed the maximum number of guests to take advantage of the event and, if well-planned, it was possible to meet a lot of characters during the night.

Whilst it was noted in the programme that character queues could close early depending on guest demand, it did seem that many of the character lines closed particularly early meaning that characters literally had nothing to do for a period of time towards the end of the party. In these situations, it should be possible to re-open the queue for fans to get quick photos with the characters rather than the ‘tough you missed it approach’. This was a small issue towards the end of the night and did not really negatively affect the night too much.

The entertainment offerings were, by far, the weakest element of the night. Shows included a recreation of the April 12th 2017 flashmob; a video clip highlight show presented by the two Disneyland Paris ambassadors and a small mini-parade with some further rare characters.

The mini-parade was, admittedly, a neat little idea. Especially when characters were split into themed lands. It provided people who did not necessarily want to queue for characters an opportunity to get some good photos.

The Cast Member flashmob sounded impressive on paper, the reality was not particularly amazing with essentially a giant dance being lead by a few Cast Members on stage. I really like that they were looking to re-create the magic of the very special Grand Celebration day; but, for me, this just did not hit the spot. 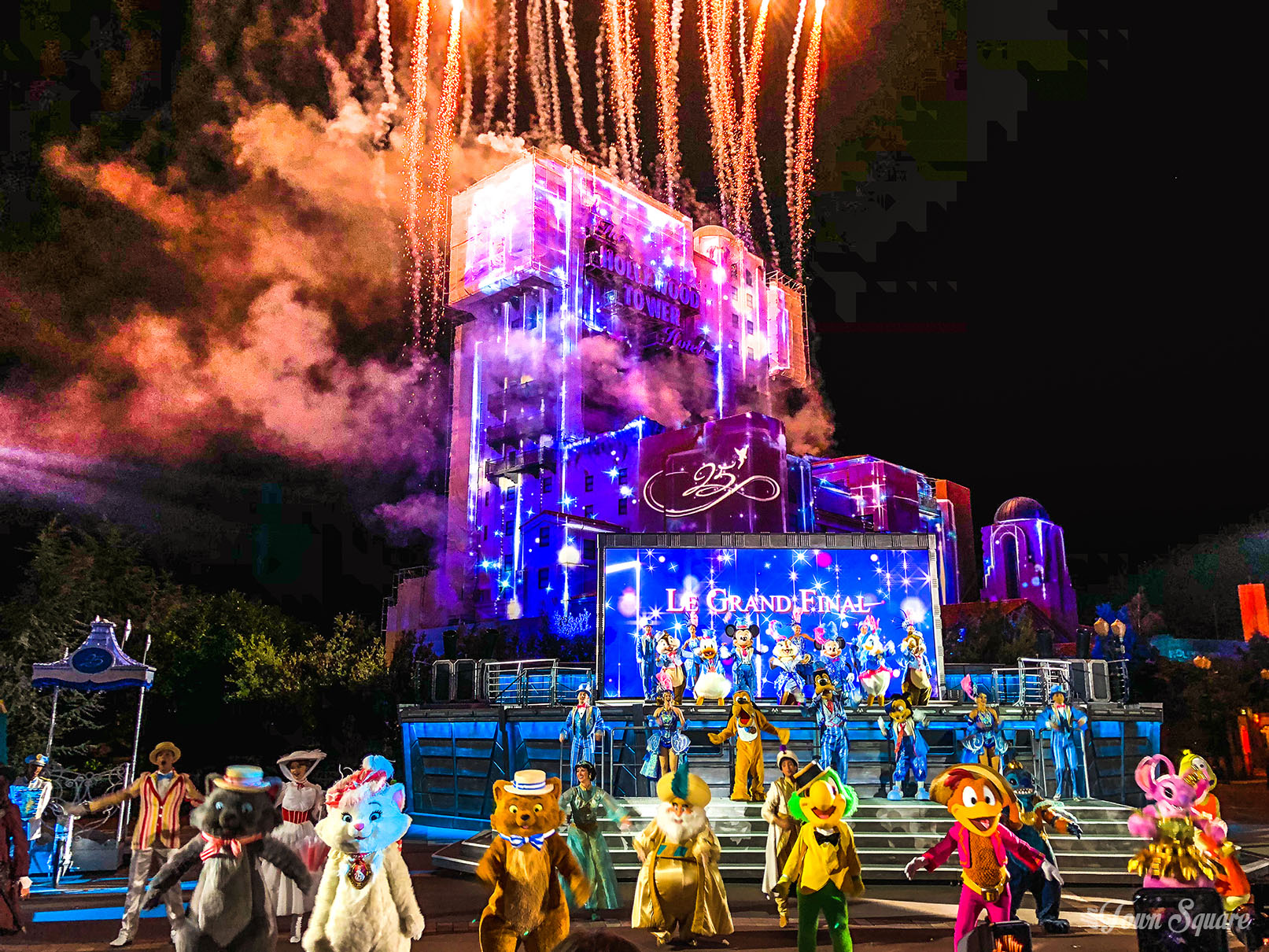 The video highlights of the 25th anniversary were very sweet. The mega-mix presented at the end of the night even managed to make me slightly emotional and nostalgic at how far the resort has come in the last year. It was perhaps not something that needed to be on the programme, but the presentation was good for what it was. However, the mega-highlight video did not make it onto YouTube which is particularly disappointing as it was genuinely good enough for me to want to watch again, it was a very sweet look back at a magical year.

Entertainment-wise, there is still a lot to do at these Annual Pass parties, but considerable effort has been put into it since the dismal Soirée Marvel and that needs to be applauded.

Who would have thought that Food and Drink would be another highlight of the Annual Pass party? Whilst En Coulisse was open, the chalets of the Rendez-Vous Gourmand also opened for the night. This was a perfect opportunity for pass holders to enjoy the event with no waits and in a less crowded environment.

The Rendez-Vous Gourmand is, in itself, a good quality event and is something that I am pleased was open to be enjoyed on the night. 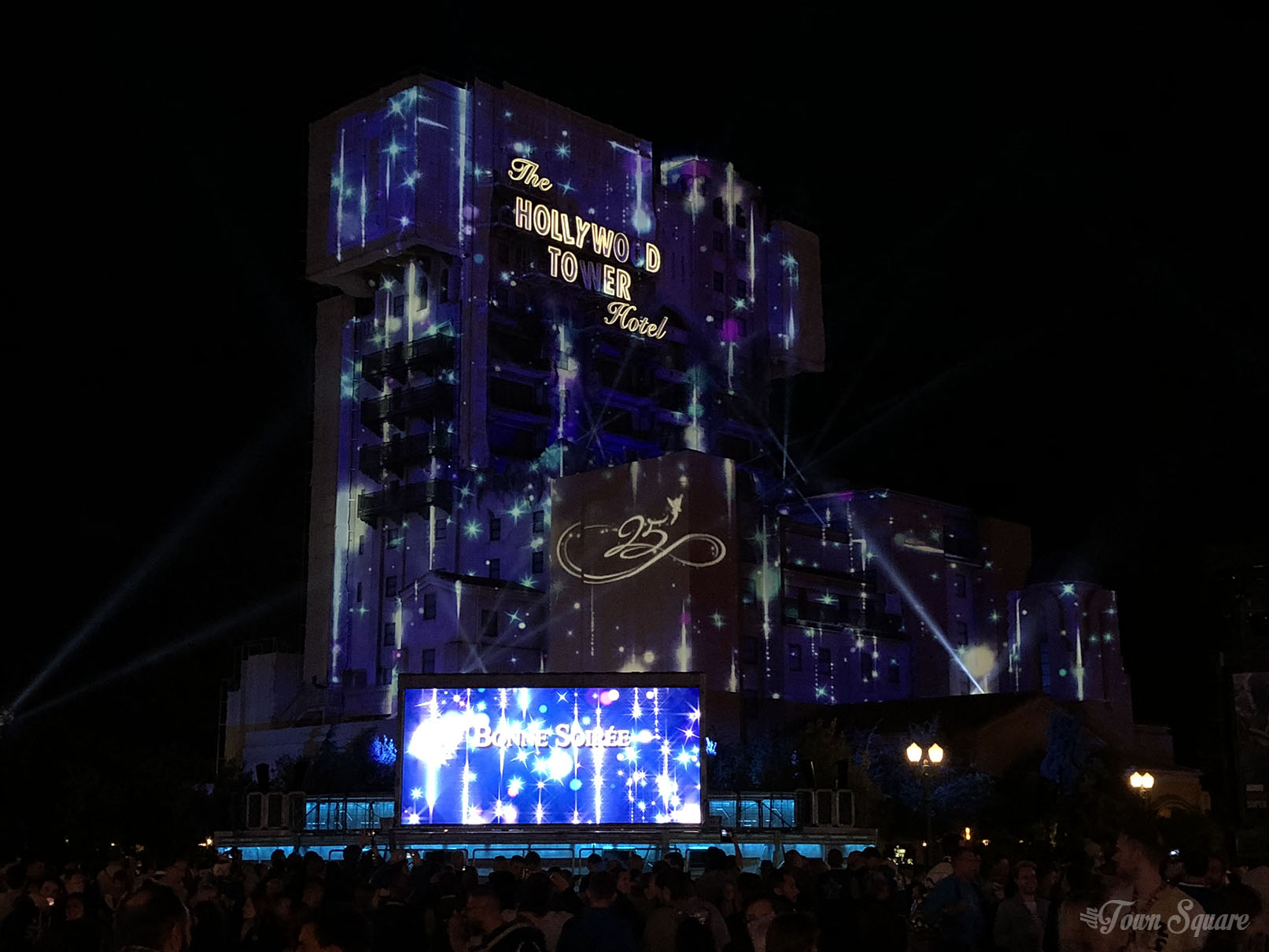 Compared to the Soirée Marvel, the 25th Anniversary Grand Final was a significant improvement. That is not to say there is no work to do, there quite clearly is, but it is pleasing that guest feedback has been taken into account. The range of characters at the event was strong but the entertainment was where the night still suffers. I’m confident that these types of issues will be looked at for coming editions though, fan feedback is important to the teams.

This was the third edition of the Annual Pass party events, it seems quite clear that the shift is being made to being character-lead events. Whilst I am fine with this, I still place the Tower of Terror night as my favourite of the three. This particular party placed a lot of effort into streetmosphere and creating a strong theme throughout the park. I do hope this sort of formula returns (with character additions) in the future. 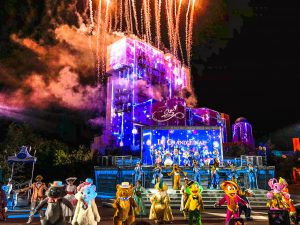