In 2013, the Disney Universe was shaken by a new film based on  Hans Christian Andersen’s The Snow Queen; a film that Walt Disney himself wanted to make in the earlier days of Disney Animation. Disney, keen to exploit their new film launched a campaign of blitz-marketing across their worldwide resorts in what is possibly the greatest example of synergy ever seen in the company’s history.

On paper, Frozen had everything. Disney were building on the immense popularity of Tangled (2010) with its cute animation scenes; its generic title aimed to appeal to both boys and girls and lyrics written by a big name in the music writing world. Robert and Kristen-Anderson Lopez had already made a name for themselves by writing the lyrics to the hugely successful Avenue Q were but one draw to the music of the new film. The star Idina Menzel joined the cast ensuring that a beautiful voice was behind a multi-dimensional role. Let it Go was to be the song that captured the hearts and minds of audiences worldwide, and it was clear that it would be the case since the Disney Animation Studios presentation at the 2013 D23 Expo in Anaheim, California.

Fast forward to August 2013 and it was revealed that Disneyland Paris would debut a new night-time spectacular for the Christmas Season named Disney Dreams! of Christmas the visual gave a clue as to what we were to expect. 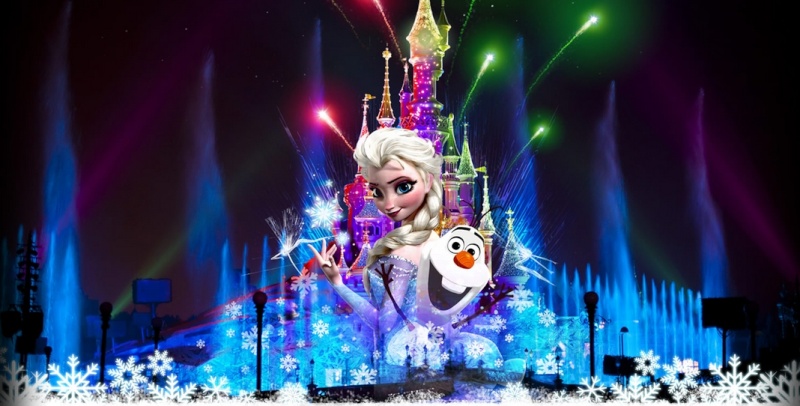 In November 2013, Frozen fever was starting to ramp up, despite the fact that nobody had even seen the film; and for once, Disneyland Paris was first. It’s November 8th and Disneyland Paris begins the soft-opening for Disney’s Enchanted Christmas! and the worldwide debut of Anna and Elsa in a Disney Park. Disney Magic on Parade! was significantly enhanced by the modification of the existing princess float which saw Ariel get removed and Anna, Elsa and Olaf added. 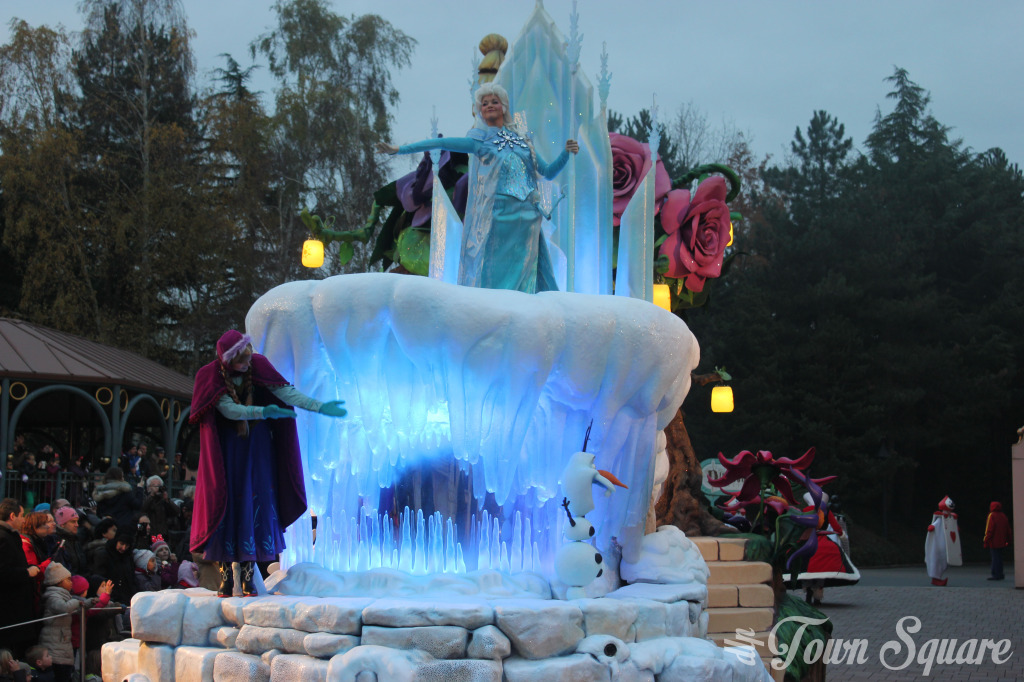 The beautiful float sees Anna and Elsa playing in a winter wonderland with Elsa guarding her ice palace on top of the North Mountain. An animatronic Olaf greets guests and allows Anna to interact with another friend from the future film. Girls are greeting the parade with huge cheers whilst wearing Elsa dresses and the Olaf soft-toys were nowhere to be seen. It’s November 8th, the film isn’t released until 6th December 2013. Disney Dreams! of Christmas premieres to the press the following night, a giant Olaf adorns the castle introducing us the the most wonderful time of the year. Elsa (voiced by Idina Menzel) performs Let it Go in a spine-chilling moment, again despite anybody having seen the film in question.

I’m not here to explain the Frozen phenomenon, The New Yorker explains in beautifully but it’s likely we won’t know the real reasons for ten years or so, as Jennifer Lee explains in ABC’s The Story of Frozen: “I can’t wait for them to grow up in 10 years so they can tell us why”. It’s a funny concept, an animated film really has taken over the world and united audiences in a way that only Disney can.

The Frozen invasion was not just occurring in Disneyland Paris, Walt Disney World Resort debuted Anna and Elsa as a meet-and-greet in Epcot’s Norway Pavilion on November 19th 2013; Disney’s California Adventure saw the two debut as a meet-and-greet from November 15th 2013 as well as World of Color: Winter Dreams (a show very similar to Disney Dreams! of Christmas).

Frozen’s popularity has not slowed down since the December cinema release: Walt Disney World Resort moved Anna and Elsa from Epcot to the Magic Kingdom where queues topped five hours. Frozen’s magic also got added to Disney’s Soundsational Parade in Disneyland Resort, Anaheim as well as to the new Festival of Fantasy in the Magic Kingdom (where Anna debuted her coronation dress). Walt Disney World also added the Frozen Summer Fun celebrations to Disney’s Hollywood Studios Park. The event included a Frozen Sing-a-long, fireworks and a Frozen welcome each morning. Tokyo Disneyland will extend this during the Winter months as Frozen Fantasy will debut in January.

So, where does this leave Disneyland Paris? Anna and Elsa will once again be front-and-centre of the Christmas celebrations which is no bad thing. But, for the first time they will take over the Princess Pavilion meet-and-greet location offering their fans to meet them in person (it has recently been confirmed that guests will meet both Anna and Elsa)! It is unclear as of yet whether they will take part in the Princess Promenade, but smart money would say that they will be. But what of their appearance on parade? Arendelle fans might be less excited to learn that Disney Magic on Parade! will not be performed during the Christmas season thus cutting down on potential times to just see the princesses should they not appear in the promenade.  Disney Dreams! of Christmas will be returning as Olaf takes us through the season as we, once again, get chills upon hearing Idina Menzel’s mesmerising voice echo around Central Plaza and Main Street USA.

But is this too much Frozen? Can there even be too much Frozen? The short answer is no. Disney are exploiting the pulling power of perhaps their current most profitable IP. It’s wise to market Frozen as being the big draw of the Christmas season – and for most families, it will be. Frozen packs a lot of pulling power in today’s society. Is this Frozen invasion going to impact too much on Disneyland Paris? No. If you wanted to avoid Anna, Elsa and Olaf simply don’t watch the parades or Disney Dreams! of Christmas. Disneyland Paris will still offer the classic, classy, traditional Christmas we are all used to and love. As Disneyland Paris fans and guests, we want more Frozen. As previously mentioned, the pulling power is so great that guests will come just to enjoy a Frozen sing-a-long. Why not take that further and develop the Walt Disney Studios with it? The recent rumoured closure of Animagique could bring a Frozen show, which upon opening would arguably attract the biggest queues in the resort. Further in the future, why not a Frozen ride? Afterall, if Ratatouille deserved a ride, Frozen and Tangled certainly do.

Frozen has its critics, but we cannot all love everything. Embracing the Frozen heart could be the best thing Disneyland Paris fans can do – it has the power to transform the parks and really drive guest attendance as well as providing moving, emotional memories that will stick with us forever; that is the real heart of a Disney holiday anyway.