Behind every great Disney attraction lies a team of the world’s greatest creative minds: Imagineers. Myself, along with around fifty other fan tweeters and bloggers got a chance to sit and listen to two imagineers, Beth Clapperton (Art Director) and Bjorn Heerwagen (Show Director and Production Manager), talk to use for around an hour about Ratatouille: L’Aventure Totalement Toquée de Rémy. Walt Disney Imagineering is based in Glendale, California; founded in 1952 as Walt Disney’s team charged with creating Disneyland, Walt Disney Imagineering have created numerous theme parks and attractions since. The word Imagineer is a blend of the words Imagination and Engineering, both of which are an imagineers job. 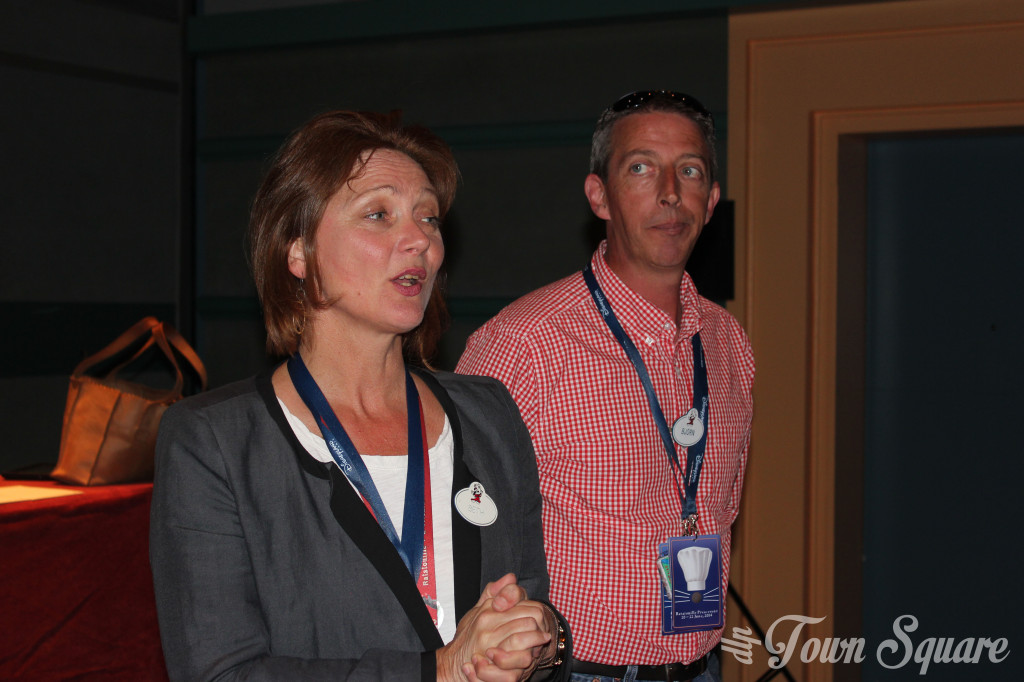 Beth Clapperton joined Disney in 1990 before being attached to Disneyland Paris in 1992. Bjorn joined Disneyland Paris in 1991. So, how did Ratatouille: The Adventure start? A requirement given was that Disneyland Paris were looking for a big family adventure. Four years later, voilà! Here we are with Ratatouille: L’Aventure Totalement Toquée de Rémy. As with everything at WDI, it all began with an idea and five years ago (2009) an original render was made. The creation of models began four years ago (2010) and construction two years ago (2012). So, what do WDI mean when they say they create models? A mix of 3D computer models and physical models are built – WDI still put a lot of emphasis on the physical modelling. This allows imaginners to visualise the attraction from a guests point of view from very early on in the process which becomes a very useful designing tool. The models are built to a 1/10th scale. 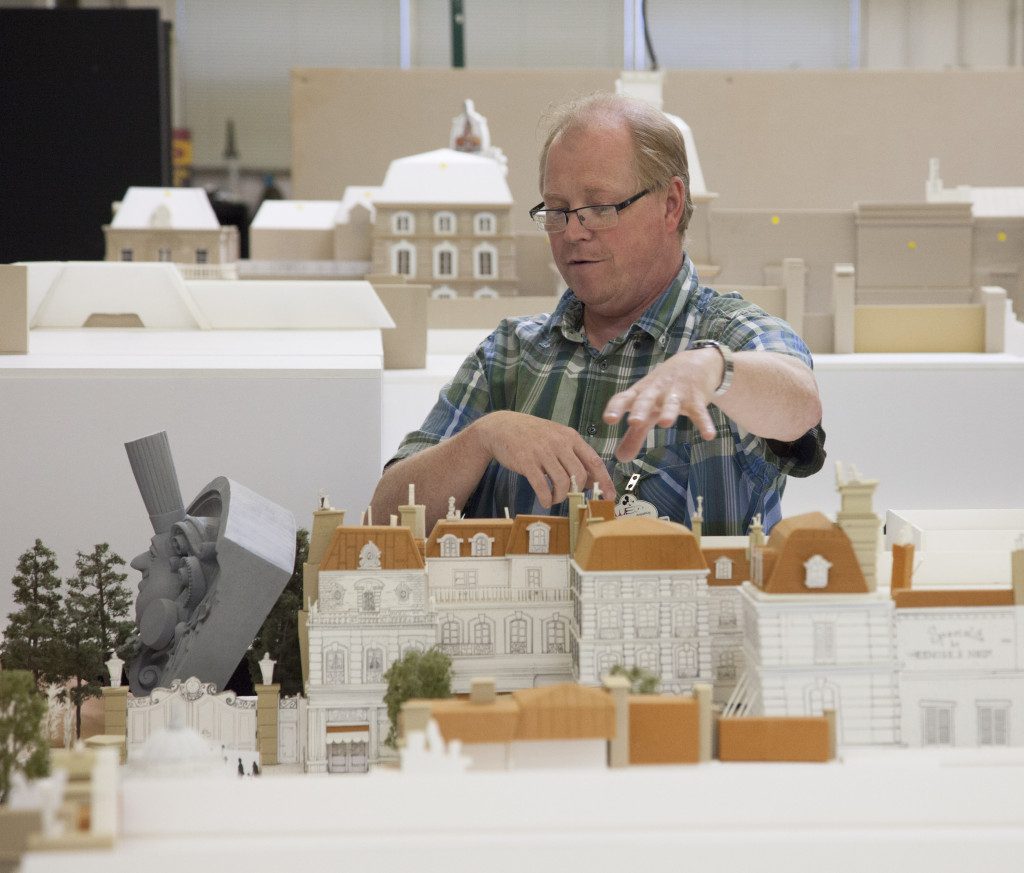 La Place de Rémy does look very much like the city 40km away; re-creating that would be foolish, however, Disney have created the Paris of Ratatouille: Rémy’s Paris. This is a Paris inspired by the city and not a replica of it. To create gorgously detailed work, Disney drafted in a large number of artisans adding layers of authenticity.

Authenticity was also derived from Pixar Animation Studios who created all the film sequences that can be seen in the attraction, all of which were made specifically for Ratatouille: The Adventure allowing imagineers to blur the lines between film and attraction. Pixar provided daily rushes (just as they would when producing an animated feature film) which were sent to WDI in order to properly test the attraction. Pixar’s involvement didn’t stop there – 15 of the original Ratatouille animators came on site in Glendale to observe progress. Pixar also created the designs for the giant hors d’oeuvres to add further authenticity to the décor. 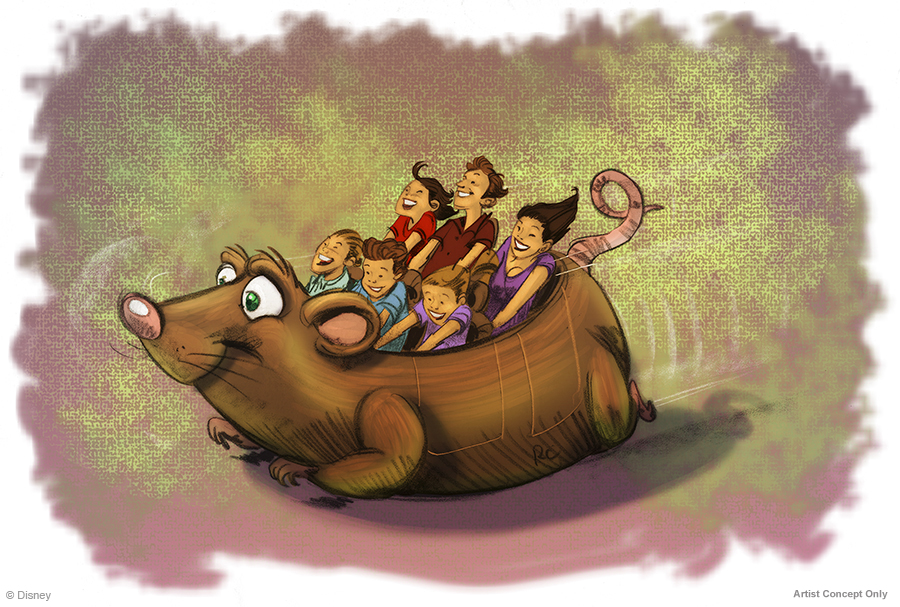 Ratatouille: The Adventure is a third generation trackless ride – this ride system gives imagineers increased liberty to be creative. The ride vehicles have been named Ratmobiles of which there are 36 of them including one modified to hold handicapped guests each holding six people. These vehicles were designed at the same time as those created for Hong Kong Disneyland’s Mystic Manor attraction; the Ratatouille vehicles, however, are more advanced as they are able to twist, vibrate and tilt.

The scale of the attraction is unprecedented, as we walk through the initial Parisian theatre entrance arch (Human-Sized), visual clues indicate to us that we are shrinking. For example, the rooftop queue area is indeed oversized, we feel small but that is nothing compared to the following load area where everything is bigger still. In fact, a lot of these props are so large that they couldn’t be transported and so had to be built on site. The exception being the ham which WDI filmed being transported from Meaux to Disneyland Paris. The size of the project was so large that multiple workshops were needed, the UK housed workshops for scenes 0,1,2,5,9 and 10. The attraction décor has been designed to last for at least twenty years. The level of detail that has gone into this attraction is stunning – Beth revealed that she worked so hard to get Scene Four’s fish eyes right (Keep an eye out for them!). Scene Four also contains the aforementioned giant 1.2 ton ham which in itself is impressive, but French regulations insist in having sprinklers inside – the ham’s marrow is, in fact, an access hatch to allow access to these sprinklers. More than that, anything dangling overhead is required to have access hatches. It should also be noted that each door in the attraction weights 1.3 tons. 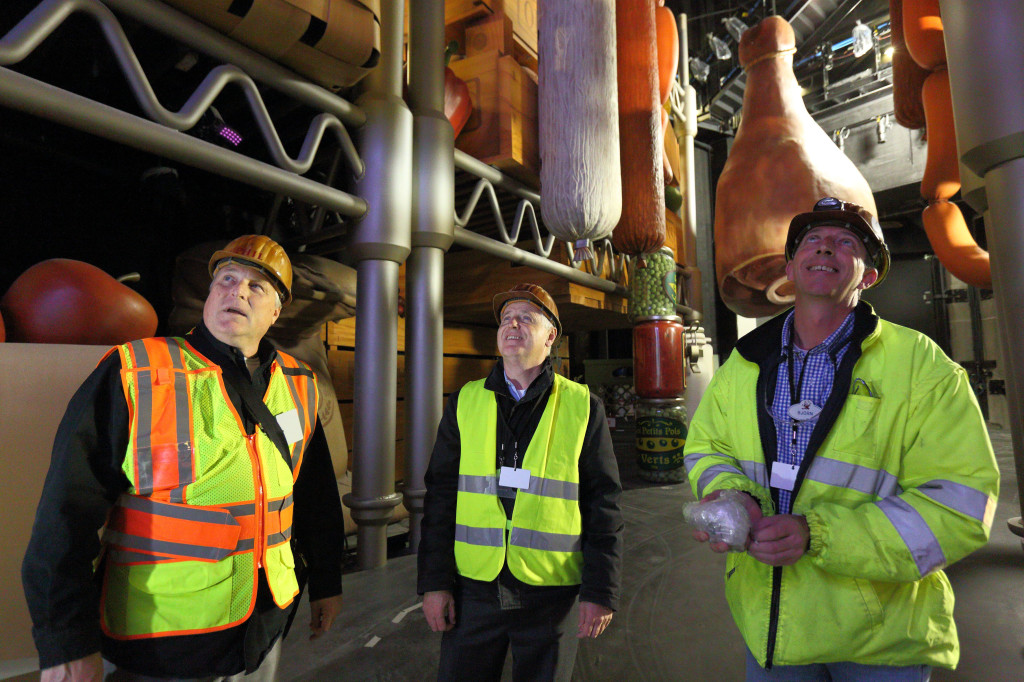 When a ride vehicle has no track, it is very possible for them to go off-piste. If a Ratmobile goes more than 5cm off course the vehicle will shut down. There will be no abrupt stop, breaks will be applied.

At Walt Disney Imagineering, show is everything and work has been done to hide show elements such as lighting and speakers. The domed scenes presented a particular challenge here. How do you project voices coming from in front of you without placing a speaker there? The answer comes in the form of an older technology named Transducers. These essentially can be placed around a room and can diffuse the audio. This way, guests will not see the show elements.

The complex design does not stop at the ride exit. Le Bistrot Chez Rémy is a restaurant covered in leaves: 2,027 to be precise. Each of which was hand-rolled, painted and attached which resulted in a team of imagineers being placed on the dreaded ‘leaf-team’ for eight months. The ride takes place in a kitchen environment, so there is a real sense that dining in Le Bistrot Chez Rémy (Which is mentioned in the ride ‘Vous êtes toujours la bienvenue, chez Rémy’) completes the experience. We have just prepared the meal – and now it is time to eat it! To re-enforce Disneyland Paris’ close links to the local community, a local provider of cheese was selected as well as local butchers. Disneyland Paris also commissioned a bottle of champagne and wine to be developed. The restaurant includes a series of original chairs. At Walt Disney Imagineering, a single chair can take between 1-3 years to develop. 11 table designs are featured. Companies from across Europe were involved in bringing Le Bistrot Chez Rémy to life including from the UK, Ireland, Romania and the Netherlands.

The presentation then moved on to a question and answer session. 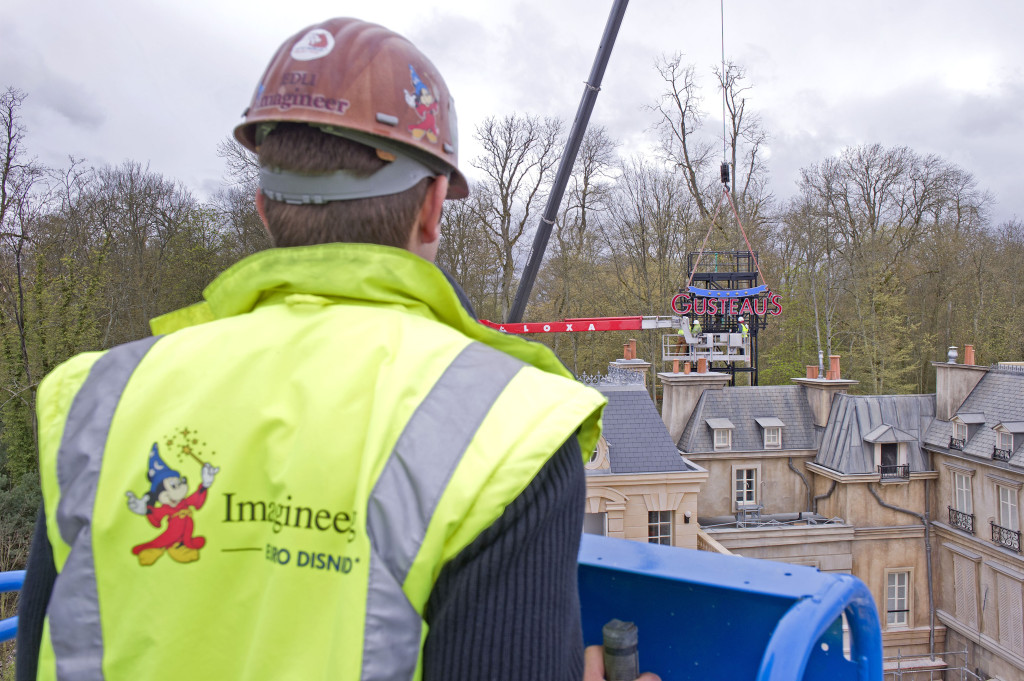 It was a fascinating hour spent in the Hotel New York with lots of details to delight fans. I would like to thank both Beth and Bjorn for their time, as well as Mathias Dugoujon and the Disneyland Paris Corporate Communications team for inviting us down and putting on this excellent presentation.