Another month, another pin trading poster. This time it’s for May and a distinctly American theme has been unveiled. 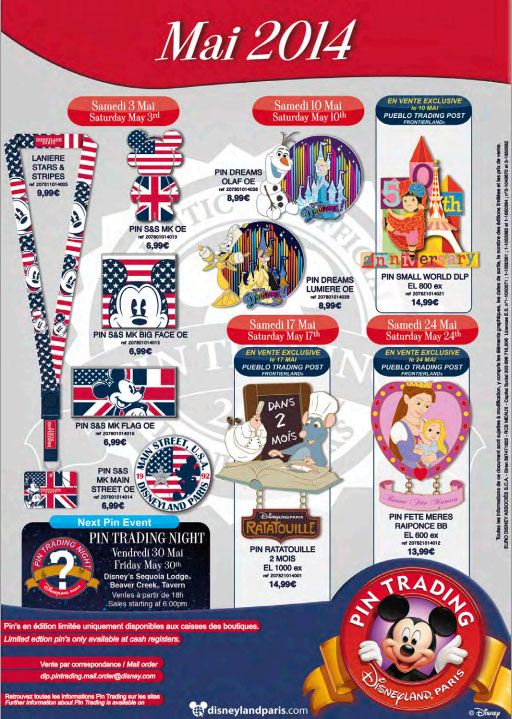 So, a mixed bag is in store this month. Let’s take a closer look:

On Saturday the 3rd May get your Star Spangled Banner out because Disneyland Paris is going all American on you. And well, only one of these pins works and that is the Main Street USA pin which actually looks quite nice. I have literally no idea where this USA/UK flag pin merge came from, but it makes very little sense – it makes even less sense when on one of the pins and the lanyard the American flag gets in on the action too. I rarely say this about pins; because even when I don’t like them, I understand that others do, but what on earth were they thinking?

On Saturday 10th May there is a continuation of the Dreams! series featuring Lumière and Olaf. Olaf is interesting in a way as he only appears in Disney Dreams! of Christmas, can we expect a return this year? Time will tell. Nice pins, I’d love to add them to my collection. In another confusing move, a “It’s a small world” pin is also released celebrating its 50th Anniversary. Which was in April. Which was celebrated by a pin (Albeit a global limited release). This pin at least is exclusive to Disneyland Paris and features some nice French artwork.

The most exciting pin is the one released on Saturday 17th May as we begin our Ratatouille countdown. It’s 2 months to go! I like this pin for two reasons, the countdown element, but most importantly that floating ghost Gusteau element is so cool.

Finally, the year of Rapunzel continues on 24th May with a mother’s day pin depicting a baby Rapunzel – that will sell out in mega-time.

Despite my reservations on the American Main Street USA pins, I’m happy with this months collection and I hope to add a few of these to my collection over time.