How do you tell a Disneyland Paris fan from a regular guest? At the moment they’ll probably be hanging around Toy Story Playland with a big lens, or a mobile phone taking photos over a fence of a construction site. So, that’s exactly what I did in Disneyland Paris last week. On July 10th Disneyland Paris will be opening their 60th attraction which will be situated in the Walt Disney Studios Park; the ride, Ratatouille: L’Aventure totalement toquée de Rémy, will be one of the most state of the art Disney attractions ever featuring 3D trackless technology. So, let’s take a look at La Place de Rémy. 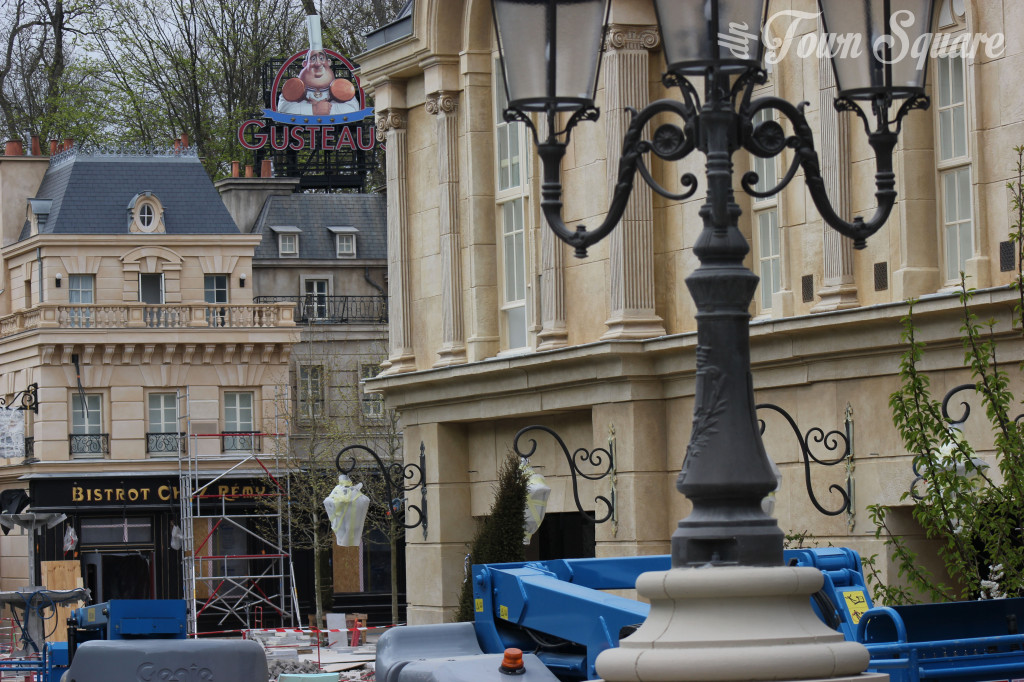 This photo was taken close to the Buzz Lightyear statues looking down the Rue de Paris. As you walk down this street you’ll see the Gusteau’s sign right in front of you along with the restaurant Bistrot Chez Rémy – the attraction itself will be located on the right hand side. Let’s take a closer look at that Gusteau’s sign. 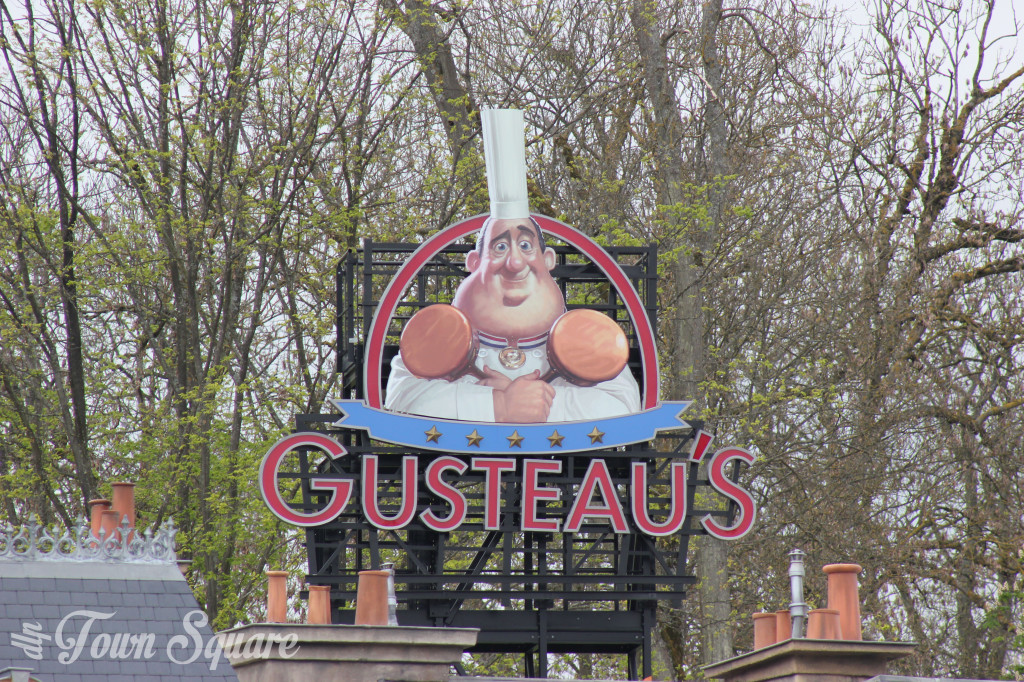 This is the new area’s weenie – and it is big. In fact, you can see it clearly from Cinémagique. The sign itself looks rather nice – the only problem are the trees ruining the forced perspective and the illusion that you actually are in Paris. But it’s a small price to pay. Moving across to another fence, this time the tunnel leading from Toy Story Playland into La Place de Rémy and this is the view that greets us: 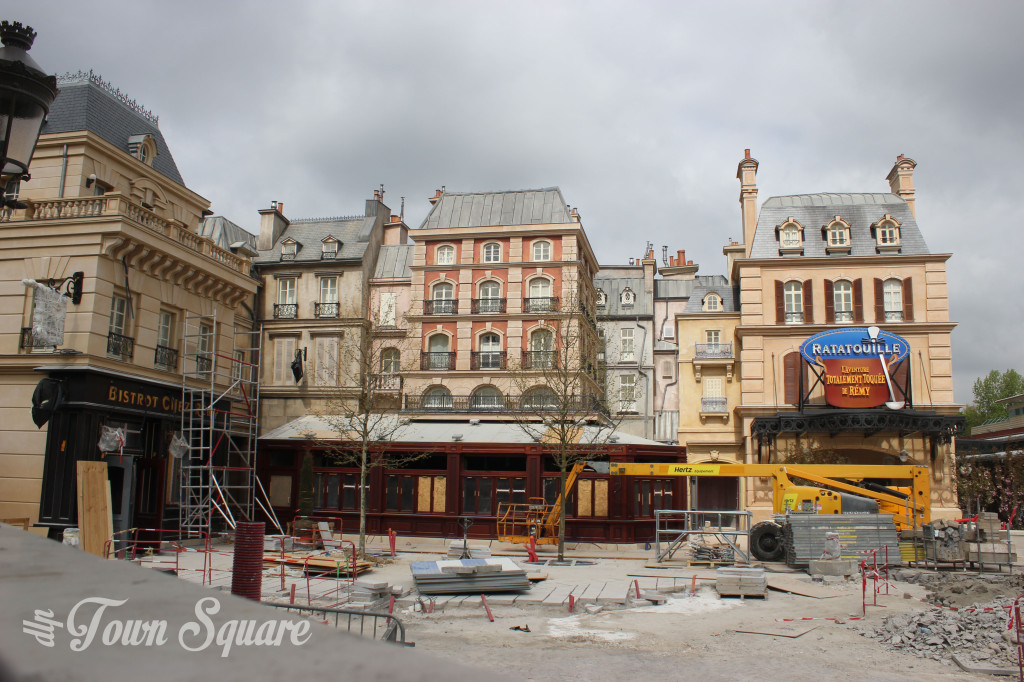 From this picture you can see that a large amount of the floor has already been completed, with very little still to do. The entry to the restaurant can be clearly seen to the right whilst straight ahead is the oversized sign indicating the attraction entry. 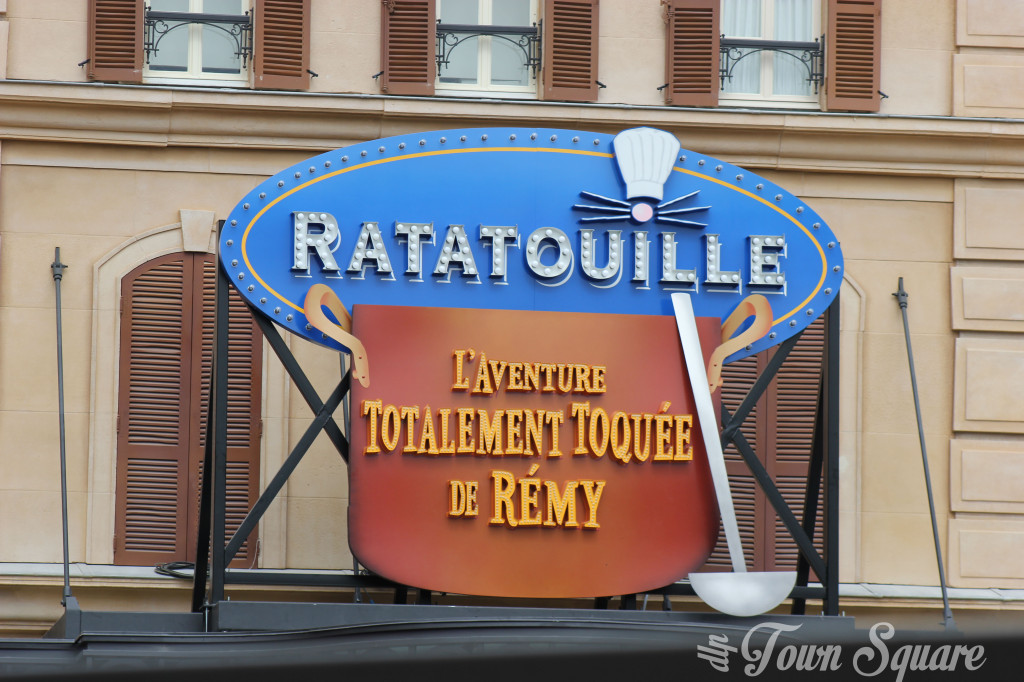 This sign looks rather nice – the two sets of words are made up of lights which are sure to look rather spectacular at night. My only regret here is that I would have liked to have seen steam coming from the cooking pot. 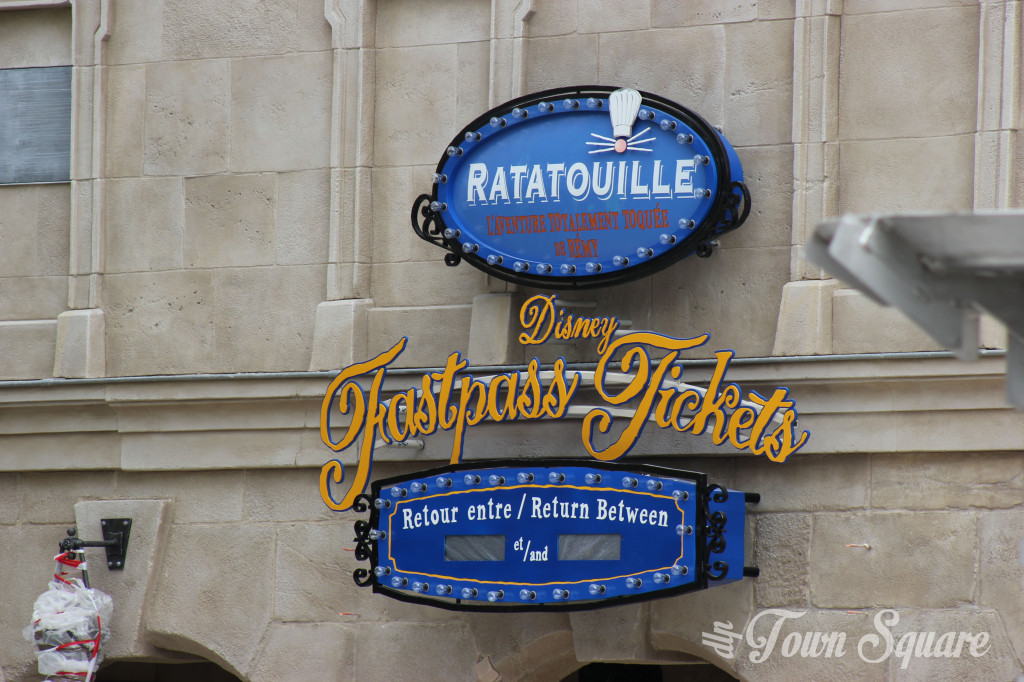 This sign has recently been taken away, but it’s a very classy looking sign for the FastPass distribution for the Ratatouille ride. The only concern is that the writing on the logo is in a colour which could render it illegible. 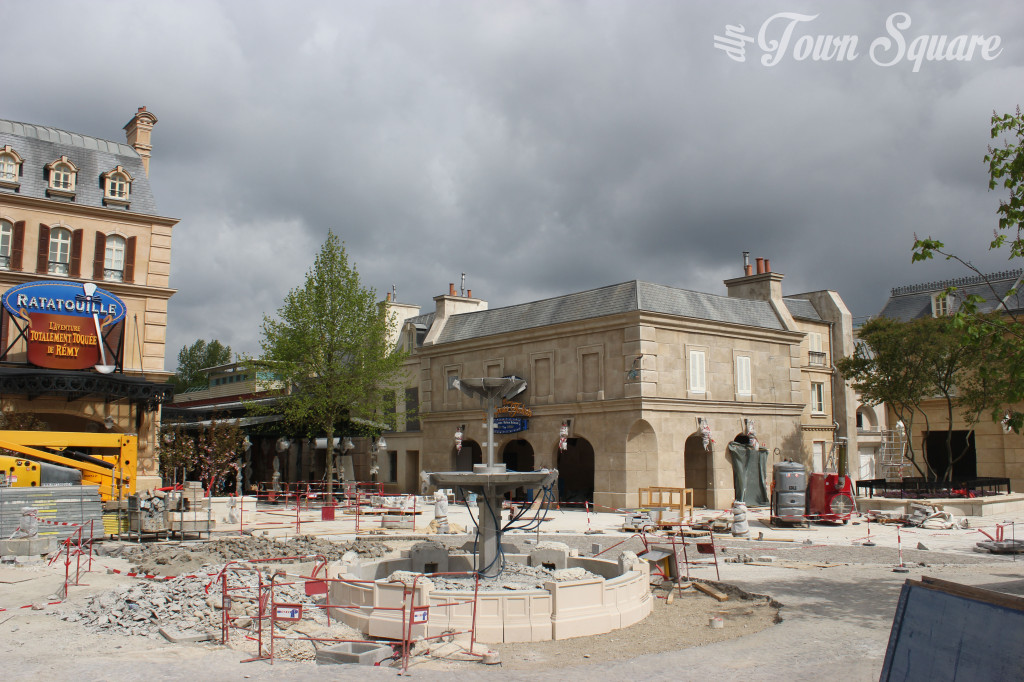 Here’s another view of La Place De Rémy; again, look how close the floorwork is from completion as well as the fountain which seems to grow daily. 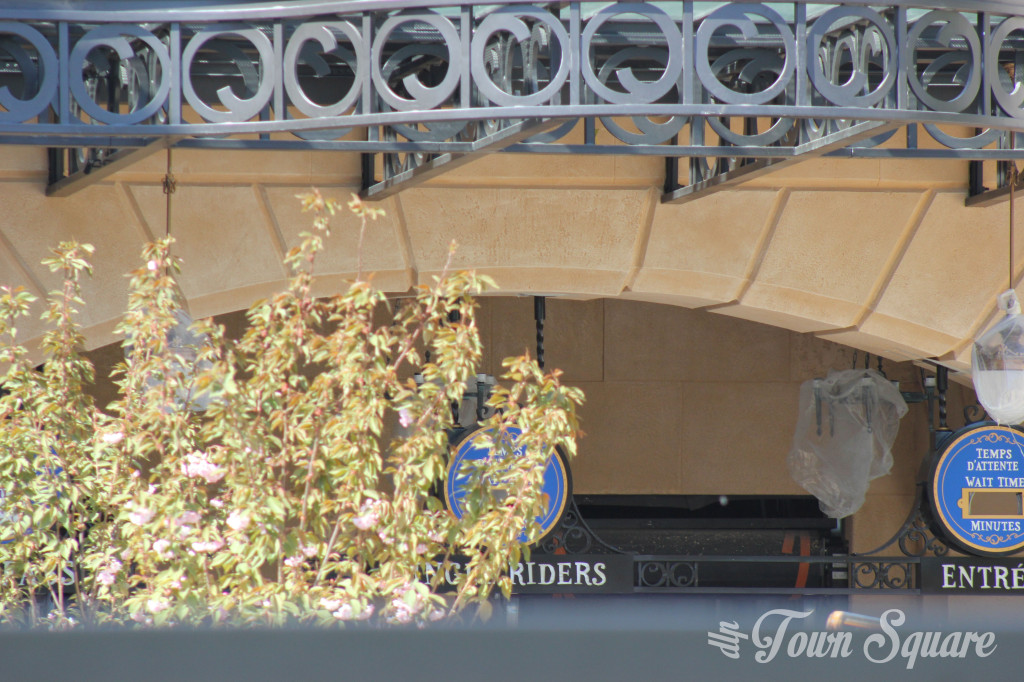 L’Aventure Totalement Toquée de Rémy will contain three queues. The first being your average stand-by queue – nothing special there. The second queue will be a FastPass queue and the final queue will be a single riders line. The fastpass entry will be on the far left-hand side; the single-rider entry in the centre and the stand-by will be on the right-hand side. Turning our focus now to the facades. 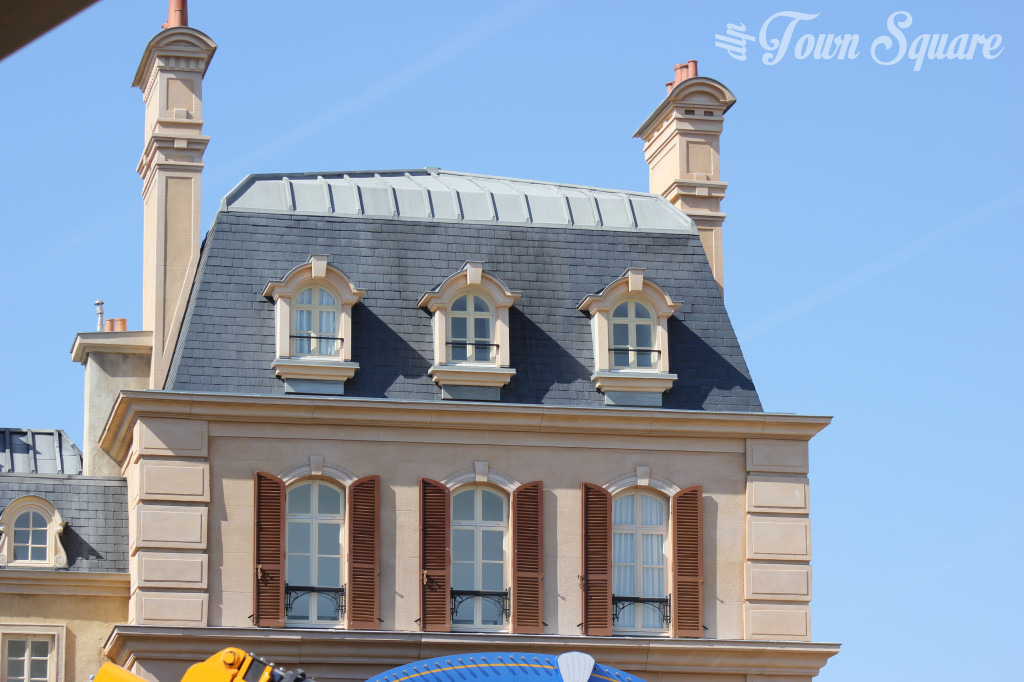 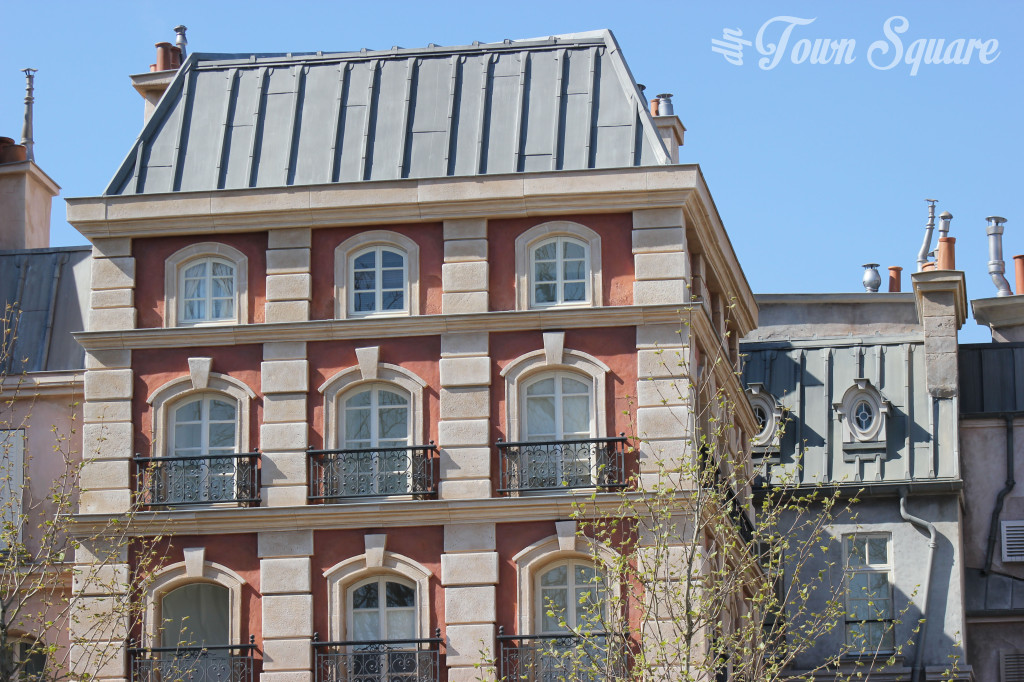 These facades look very good, and will only get better and more realistic with age. The imagineers have done an amazing job in creating Rémy’s Paris in Walt Disney Studios Park. 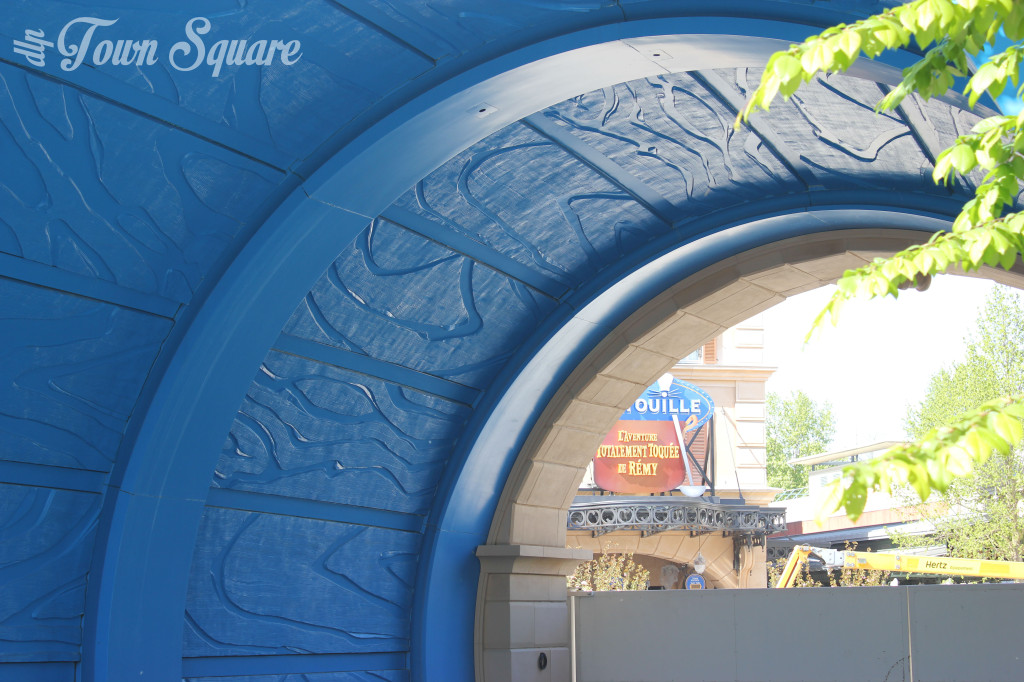 And, that’s it from the view peering over the fence from me. Next time I’ll be in Disneyland Paris the attraction and area will be open. Let’s hope that is soon! To end this report I included a photo of a view from the tunnel walking into the area for the first time. Finally, I can say that the Walt Disney Studios park will have extended opening hours this summer – from 10:00 until 21:00 with the new restaurant Bistrot Chez Rémy having service from 11:00 until 20:30. When the park returns to its 10:00 – 18:00 opening hours, the restaurant will serve from 11:00 – 17:30. Weekends in September should see the studios park also open until 21:00. N.B. You may share these photos without hesitation!

This week’s news is a short one. Why? Because I was in Disneyland Paris and so didn’t really manage to catch up with much in the way of news. What I can promise you though, is two big pieces of news and a series of articles about my trip are on the way. – In case you didn’t keep up with my constant tweeting, the new spring festivities have been done very well and lead to perhaps my favourite trip ever.

You’ve been waiting years for this news, Ratatouille: L’Aventure totalement toquée de Rémy opens on the 10th July 2014. Yes, that’s right: from July 10th you’ll be able to shrink down to the size of a rat and eat food in a rat sized restaurant. This news came after months of waiting on the part of Disneyland Paris fans with speculation ranging from the day of the French National Holiday (14th July – mark that in your diaries as a day to avoid DLP) to the 7th July. See – as a community we were never that far off! A full report of developments will come in the coming days as I bring you some photo updates from the construction site. For now though, watch and marvel at this fantastic YouTube video released by Disneyland Paris:

Marvel has finally landed at the Walt Disney Studios Park in Disneyland Paris with the limited opening of a new Spider-Man meet and greet. From the 19th April until the 14th July head to Backlot and meet the masked hero himself and get onto the front cover of the Daily Bugle. 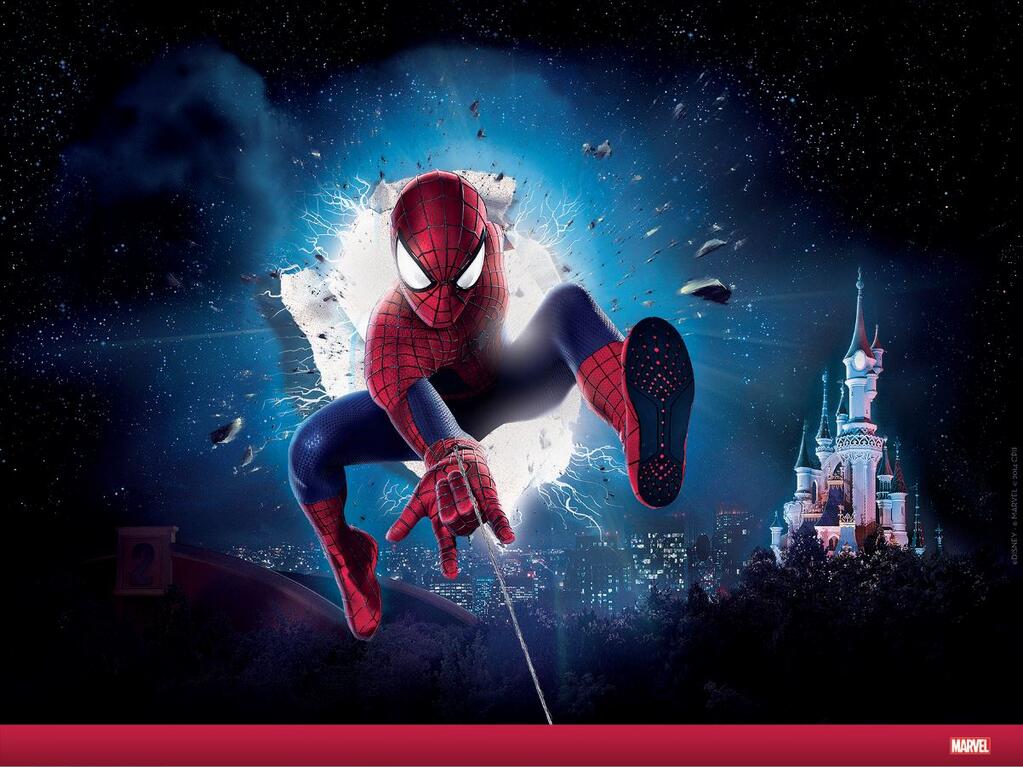 Is this a good addition to the Disneyland Paris lineup? Will you be queuing to take a picture with him? Would you like more MARVEL characters in the Studios park?

I’ve got lots of articles to write detailing my trip to Disneyland Paris soon. I hope to have them up as soon as possible. Also, Disneyland Paris e-mailed round restaurant opening hours for the next six months to fansites – As I received the information, I hope to make it available in some form to you all as a useful trip planning tool.

Thank you for following my live tweets – they are all still available to read here on this website.