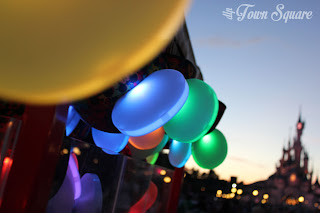 The Glow with the Show technology debuted in Disneyland Resort in the Summer of 2012 to widespread
amazement when the annual pass holder preview video came online, the sea of ears glowing to the World of Color show looked simply stunning. After that, less and fewer people used them and then Disneyland Paris announced they were coming to our European resort from Summer 2013 under a different name ‘Light’Ears’. Were they to be more popular in Paris?

The premise of Light’Ears is extremely simple, this Mickey Mouse eared headwear lights up to the rhythm of the Disney Dreams show, it reacts to beats, bangs and emotional moments. This is all done by infra-red sensors located inside the hat linking up to the Ear Mitters right down Main Street USA. The result is a beautiful show made even more beautiful by placing you right in the middle of it. See DLRP Magic’s video from the launch press event.

Have they taken off in Paris? Sales figures are very encouraging, thousands of pairs have been sold allowing guests to enjoy the magic throughout the summer. However, being in the park the ears seem more sparse, perhaps because of the summer crowds, they are more spread out and less noticeable.

These ears bring the emotion of the show closer to the guest and bring colour right into Central Plaza and down Main Street USA in a very non intrusive way, the ears turn off and on, change colour and flash in ways that seem logical and non distracting. The big highlight of the Ears was the ‘Friends on the Other Side’ scene (which can be seen in the above video), the flashing of the warm orange colour mixed with fire worked very well.

As the park exits its 20th Anniversary season, the Disney Dreams! show has given a lot of promise for the future, as have the Light’Ears. Seeing the technology in action is breathtaking and gives a desire to see the show again and again in new ways. We look forward to seeing new scenes programmed to the ears and even, perhaps, Disney Dreams of Christmas! with ear functionality.