On Friday 30th March 2018, Infinity Annual Passholders were invited to join a special evening which celebrated the 10th anniversary of The Twilight Zone: Tower of Terror. This first in a series of Annual Passholder events was a celebration of the celebrated attraction in the Walt Disney Studios Park and offered passholders the chance to experience the attraction in new and unique ways. Let’s take a look back at this party and review it and suggest what worked well and what needs to be improved. 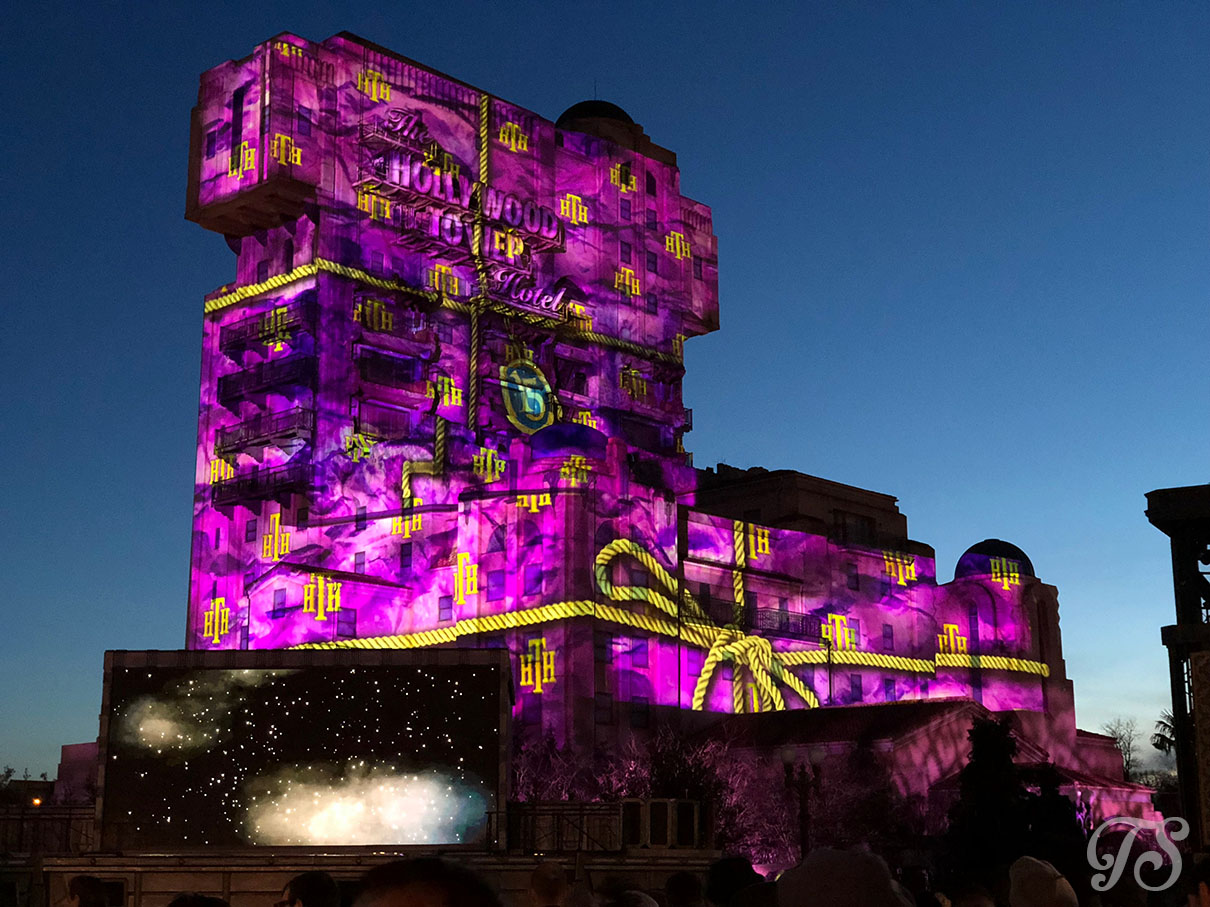 Once past the distribution point, cast members from the En Coulisse restaurant lined Studio 1 with their spooked out faces designed to give guests the feeling of unease. Passholders were then directed to Production Courtyard to claim their spaces for a special projection show.

With the projection show starting at 21:00 and nothing else accessible prior to this, calling the party start time 20:30 does seem a little cheeky, although I would imagine that all attendees wanted to watch the show anyway and so I’m happy to let that one slide.

The highlight of the Soirée de Gala was the 10th anniversary projection show (which was really the same show used for the Inauguration of the Tower in 2008). This was one of those special experiences that made the party worth the price of entry by itself and a wonderful Infinity passholder exclusive. The show mixed actors and projections to tell the story of that fateful night in 1933 when the Hollywood Tower Hotel changed forever. Whilst elements of the show perhaps were a bit strange in a 2018 context (I’m referring to the 15th anniversary logo projected onto the Tower and the 15th anniversary theme at the end of the show), I felt that they provided a sense of nostalgia which we all love in the Disney Parks. 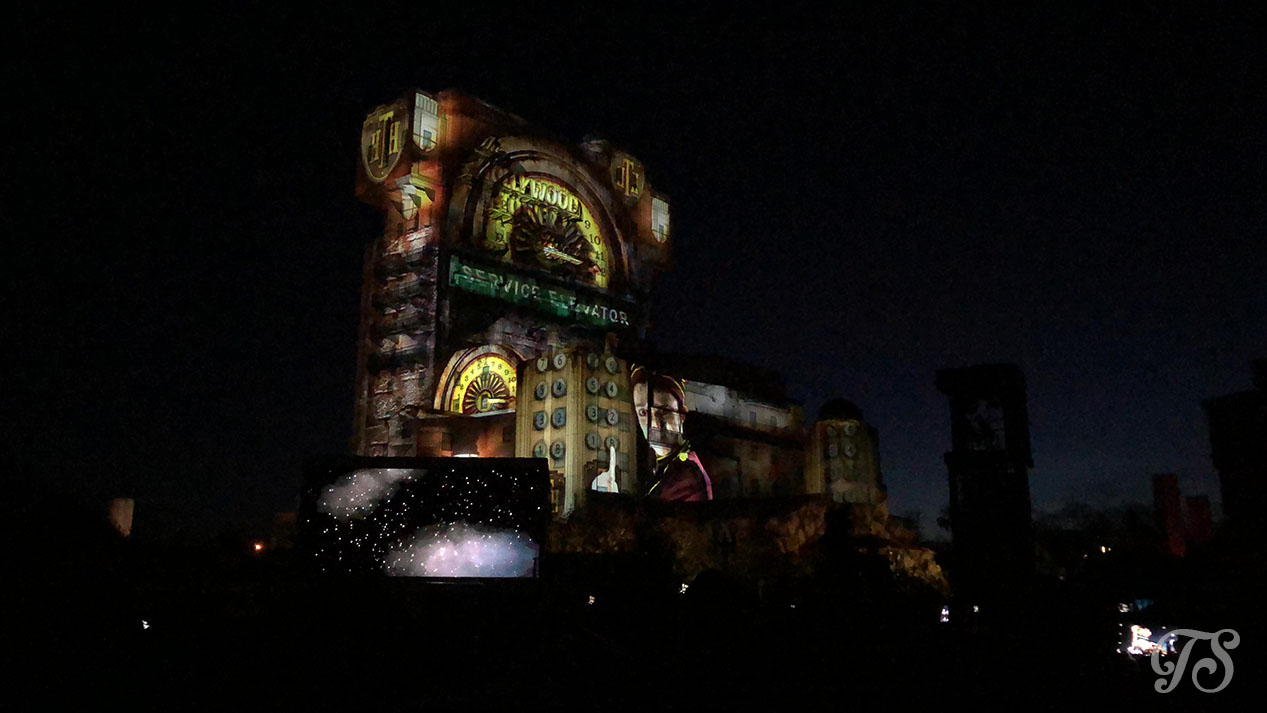 I had a smile on my face throughout this show and would love the opportunity to see it again, however this was a one off and is unlikely to happen again.

Passholders were invited to wear their 1930s-inspired costumes for the Soirée de Gala, it looked like the vast majority of the 1,200 attendees took this invitation seriously and a large amount of tuxedos and dresses were on show for the night. I always find that these parties come alive when guests throw themselves into them and do make the effort to dress up and it certainly shows. The participation of guests added to that atmosphere of the night. This was aided by the theme being reasonably simple to do, future nights might not have this luxury (such as the announced Marvel night, it is more difficult to see this evening being a costume success).

A good amount of attractions were open for this passholder evening (including, of course, The Twilight Zone: Tower of Terror), the advantage of the night was that these attractions had nothing in the way of a queue, something that is unique for even Infinity passholders and may took advantage of this to take a few rides of Crush’s Coaster. 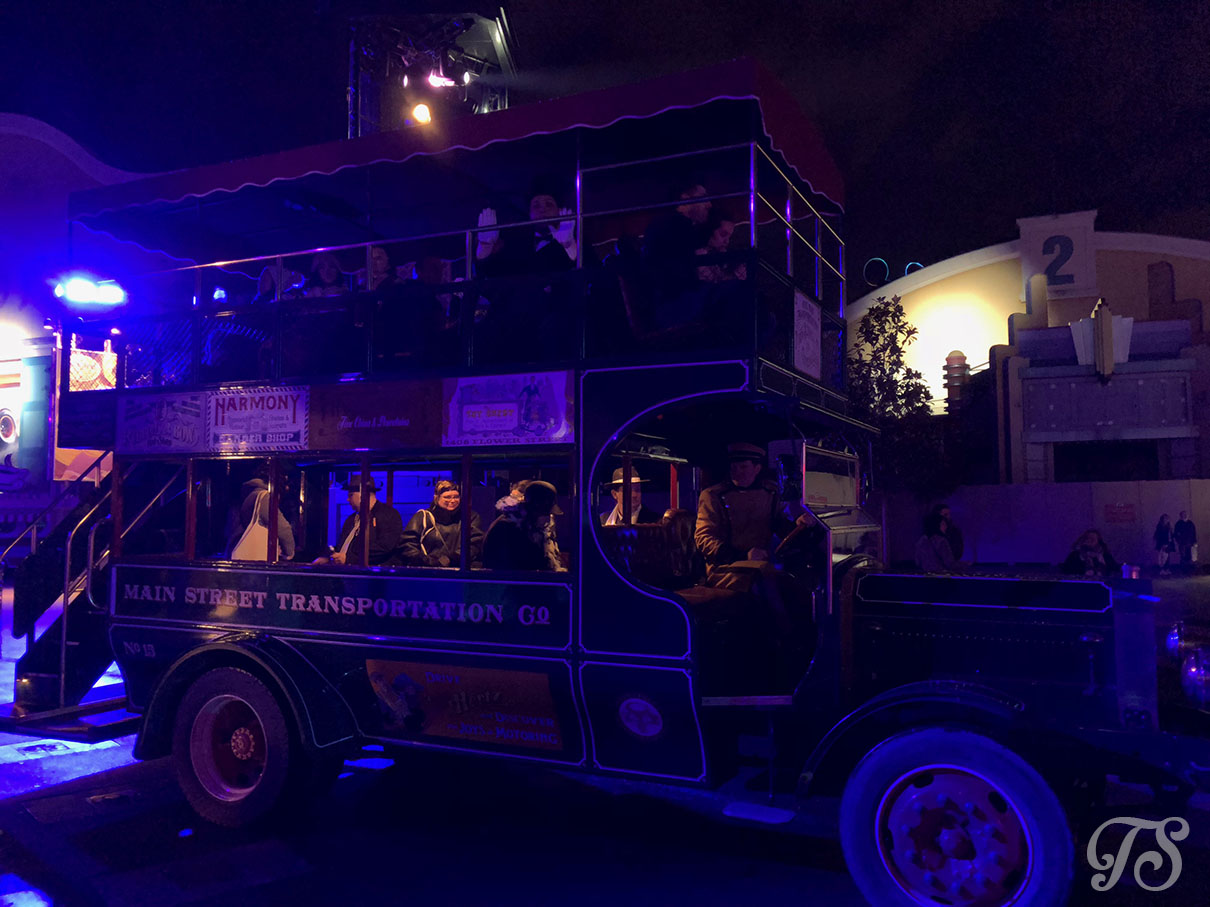 Rock ‘n’ Rollercoaster Starring Aerosmith was given a special Twilight Zone overlay for the night which saw the lighting change and a new soundtrack based on the famous theme. The Main Street Vehicles made a slight detour to the Walt Disney Studios Park for the night as both the Paddy Wagon and the Omnibus were at the event. As expected, the highlight attraction was The Twilight Zone: Tower of Terror which included actors both around the hotel but also on the ride itself.

The actors that were used during the event were absolutely fantastic and provided both atmosphere and were very much an attraction in their own right. These were scatted throughout the park including in Production Courtyard, inside Studio 1 and throughout the Hollywood Tower Hotel. They really did add to the atmosphere of the event and created some unforgettable memories on the attractions when they joined in. 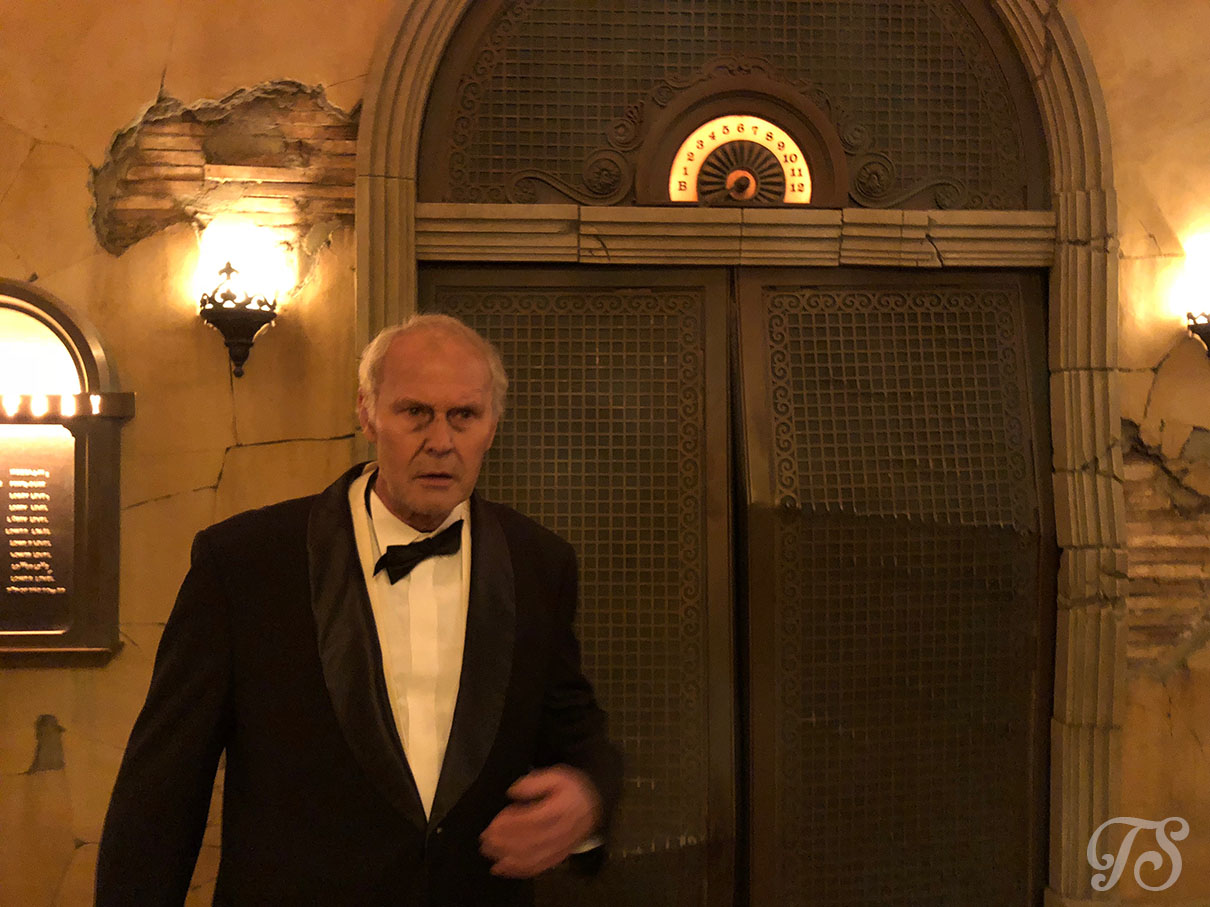 One of the weaker elements of the night was the DJ Party which never really hit it off, the DJ seemed very good but the short length of the party and there being a good amount to do within this short period meant that really guests just did not want to waste any good length of time here. The projections on the Tower during the DJ party however were really quite impressive and were very cool to watch. 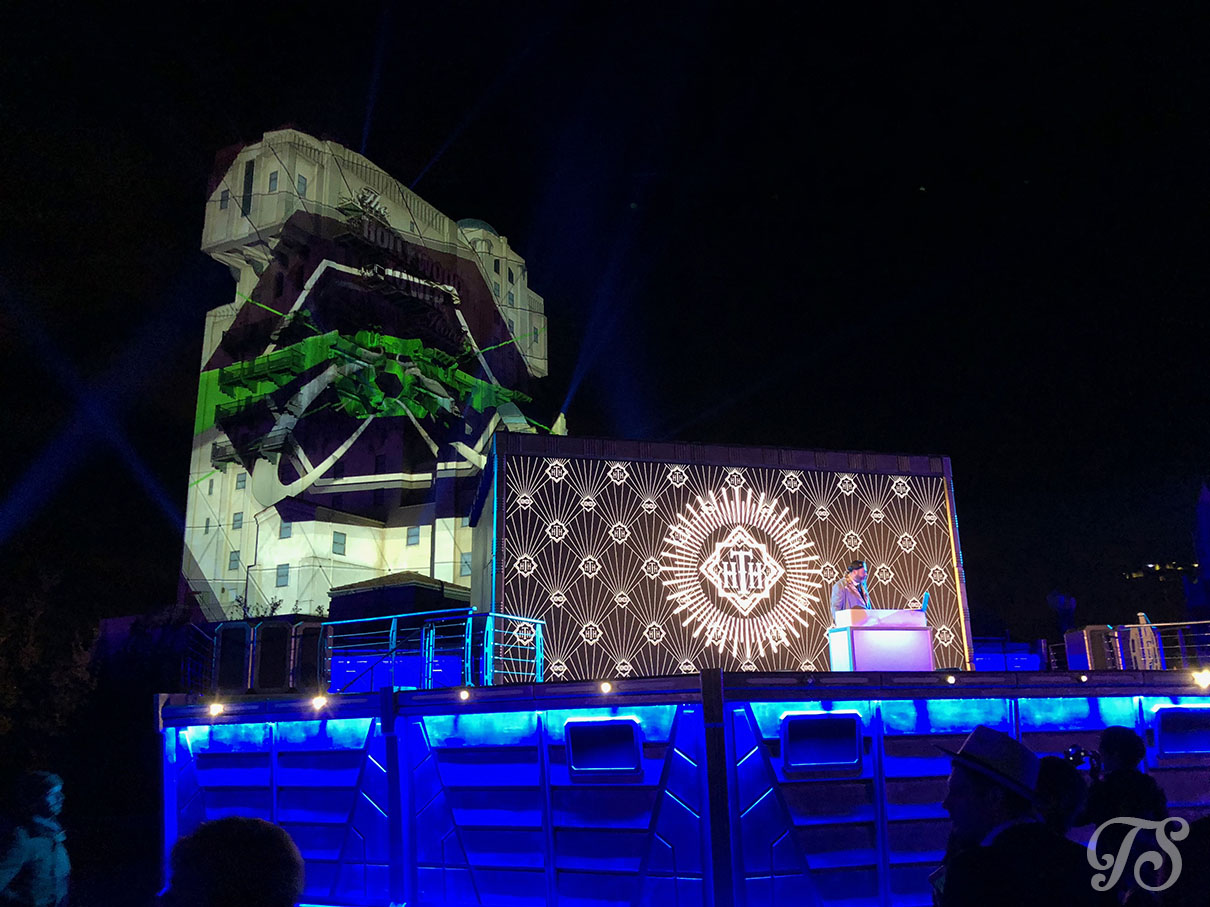 Photopass was also at the party, however by the time I found them the lines were closed which was a bit of a disappointment. It would have been nice if these were better sign posted as the photos I have seen come out of the night are stunning and I would really have liked to have had a photo in my Tuxedo in front of the Hollywood Tower Hotel.

Unfortunately, the shop element of the night was very poorly managed and quite frankly turned into a scrum inside the Tower gift shop which meant that inevitably security was called to control the situation. The programme mentioned that there would be an exclusive souvenir on sale in the shop during the party (with no detail as to what it actually was), the key was priced at €20 and limited to one per annual passholder. These keys are as stunning as the keys to the kingdom released last year and so is extremely collectible.

What was not made clear from the outset was that there was enough for everyone and that the shop would remain open until 00:00, so the scrum happened straight after the show. There was no order to the purchase, and by the time security arrived it was too late to do anything except control the flow of people entering the shop. These pieces of ‘exclusive’ merchandise was limited to 1929 pieces (for a 1,200 party) and so inevitably a good thousand went back on sale to the general public the next day meaning that Infinity passholders essentially wasted an hour in their €39 party. However, the key is beautiful and I am very grateful to have been able to buy one.

Conclusion and the Marvelous second event!

Was the inaugural Infinity passholder party worth the price? Yes, and then some. Other than the store fiasco, the whole thing was very well organised and was perfect for passholders who are used to the park and wanted some little twists that are rare in the every day park days. The lack of characters did not bother me in the slightest as I felt it was a wonderful opportunity to put the park and theme on show, this was a wonderful way to do just that. Based on the feedback from a survey that was sent out in the days after the party it is easy to envisage that there will be more character based parties and more like this and so there will be something for all types of fan. I cannot wait to see what they have in store and will certainly be attending them.

The next annual pass party will take place on Saturday 7th July 2018 and will be for Infinity and Magic Plus passholders (with the possibility to bring along 2 guests per pass), it’ll be themed around Marvel and should be a good night to explore all the Marvel Summer of Super Heroes entertainment with hopefully some exclusives taking place. Tickets go on sale on the 19th April.

More images from the event: 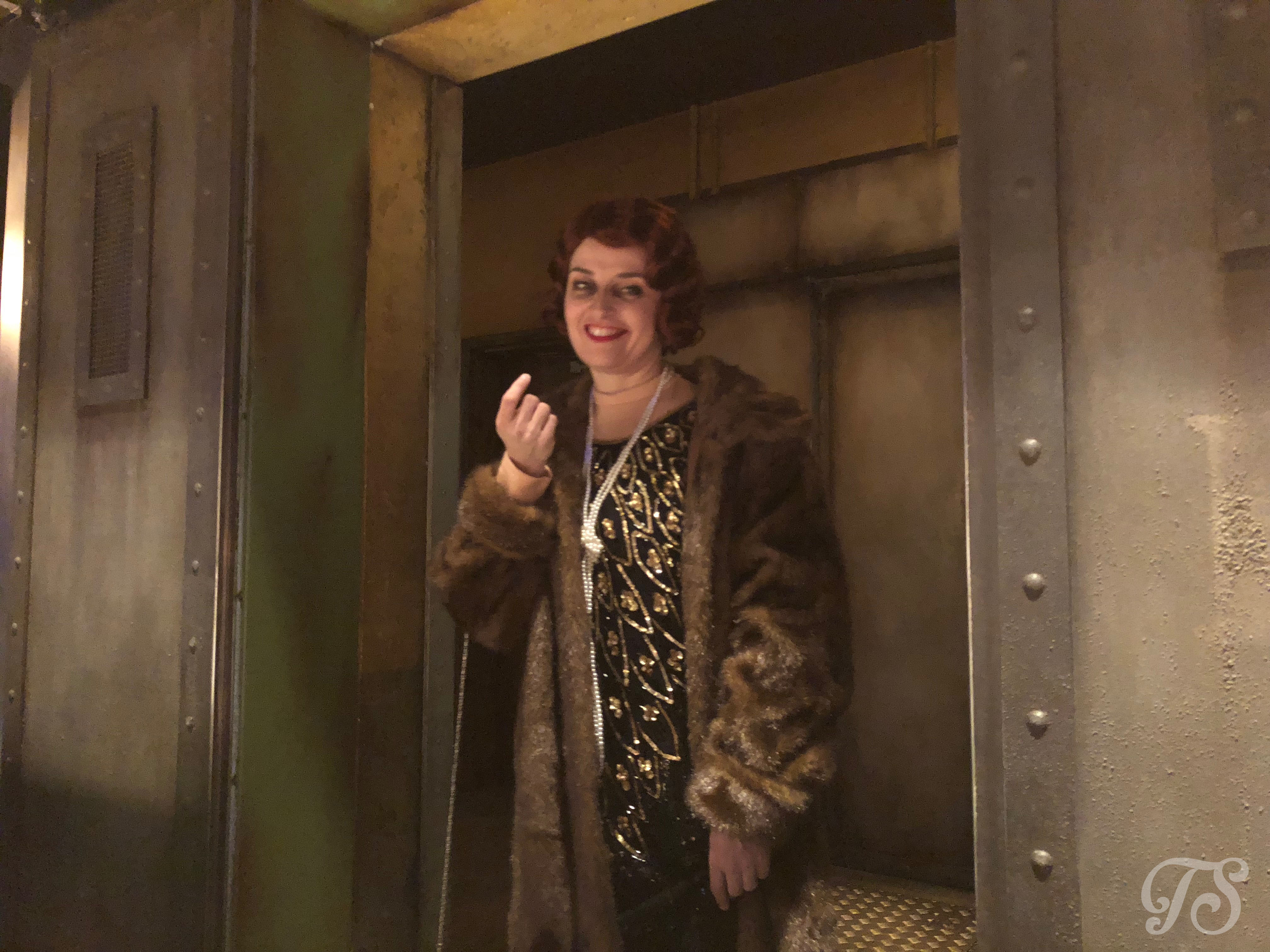 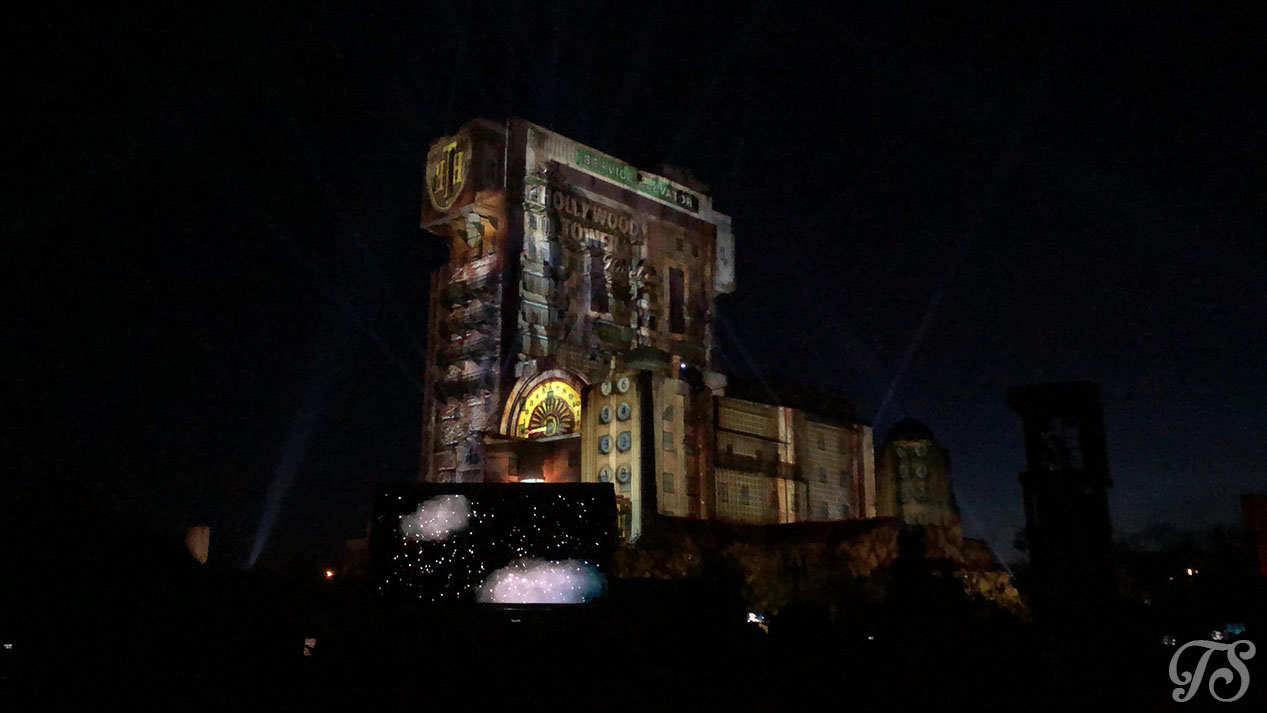 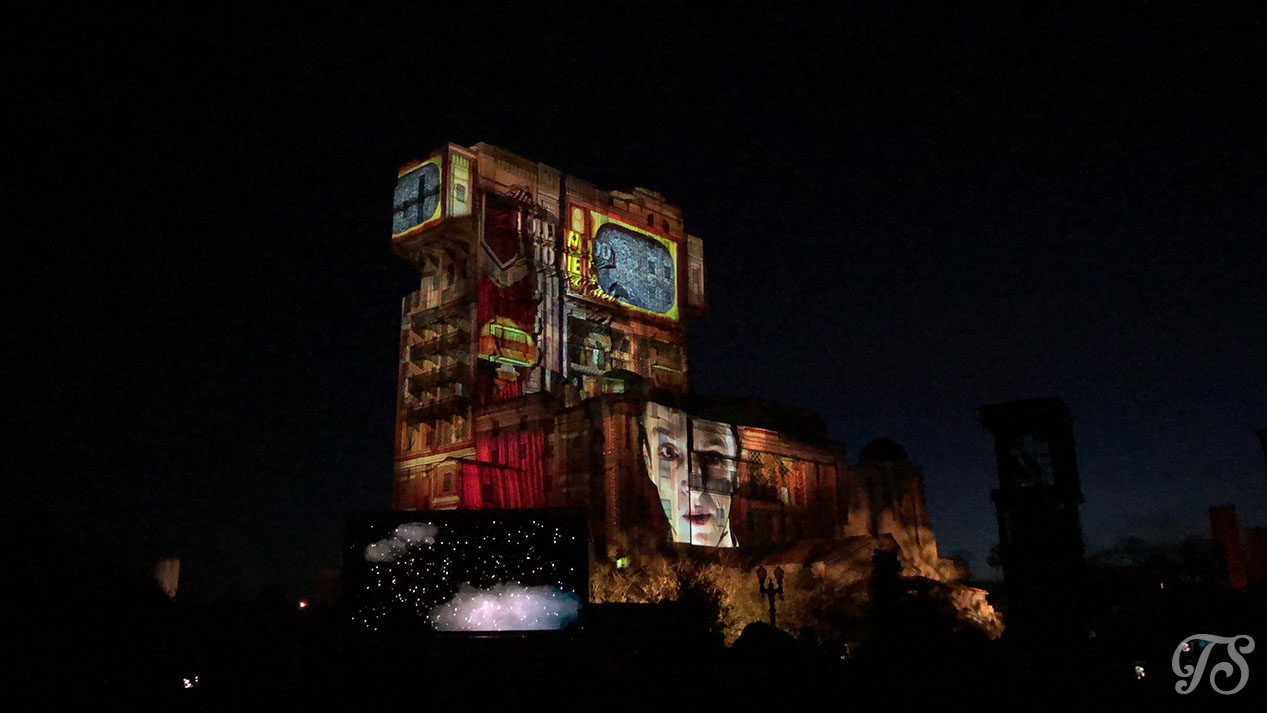 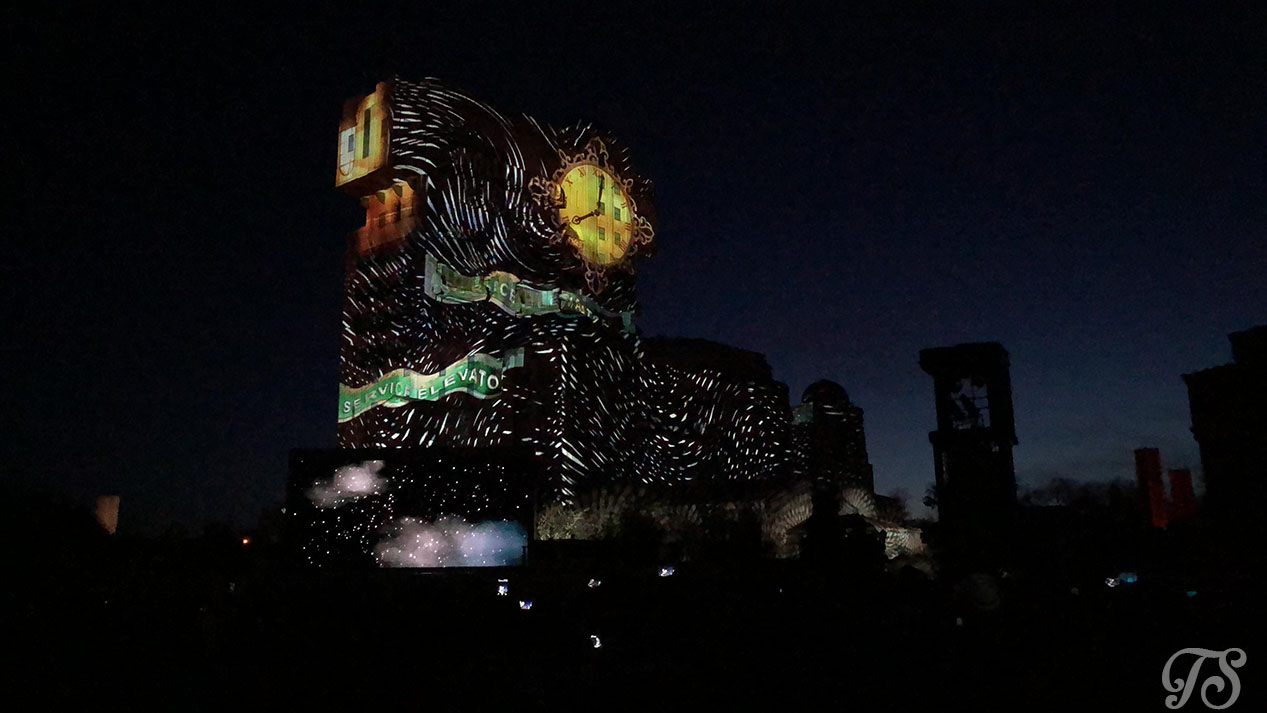 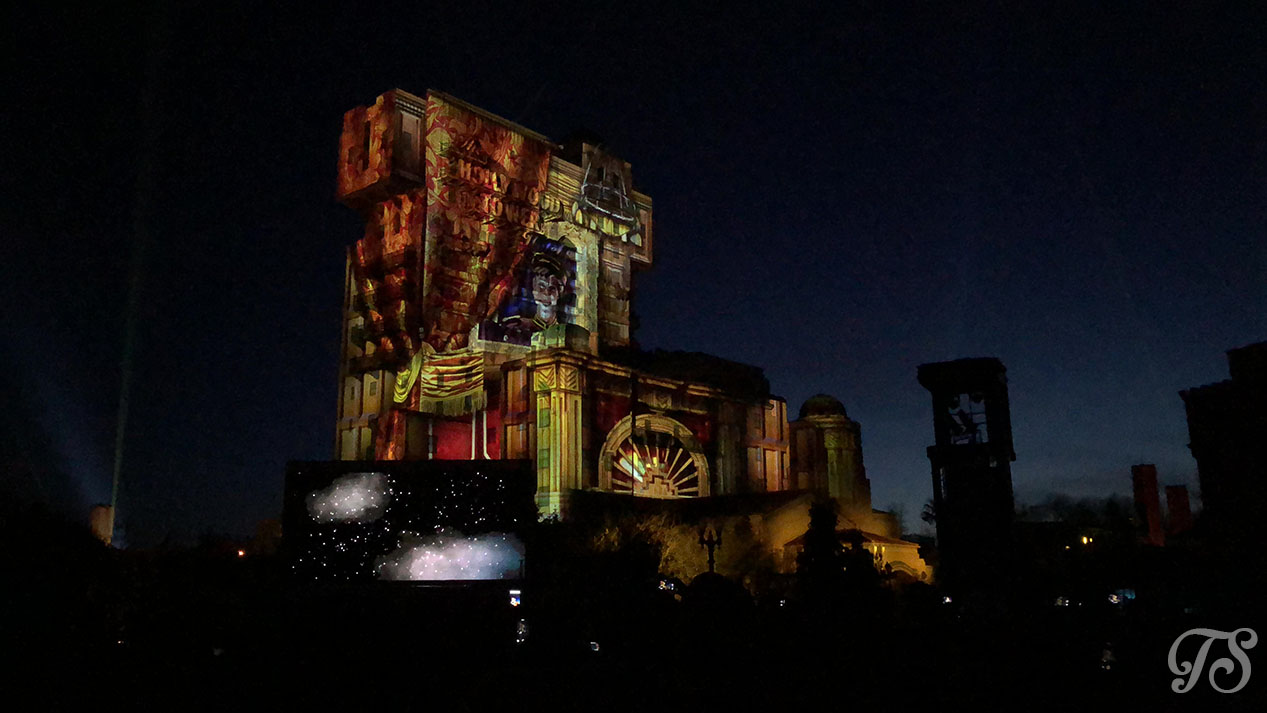 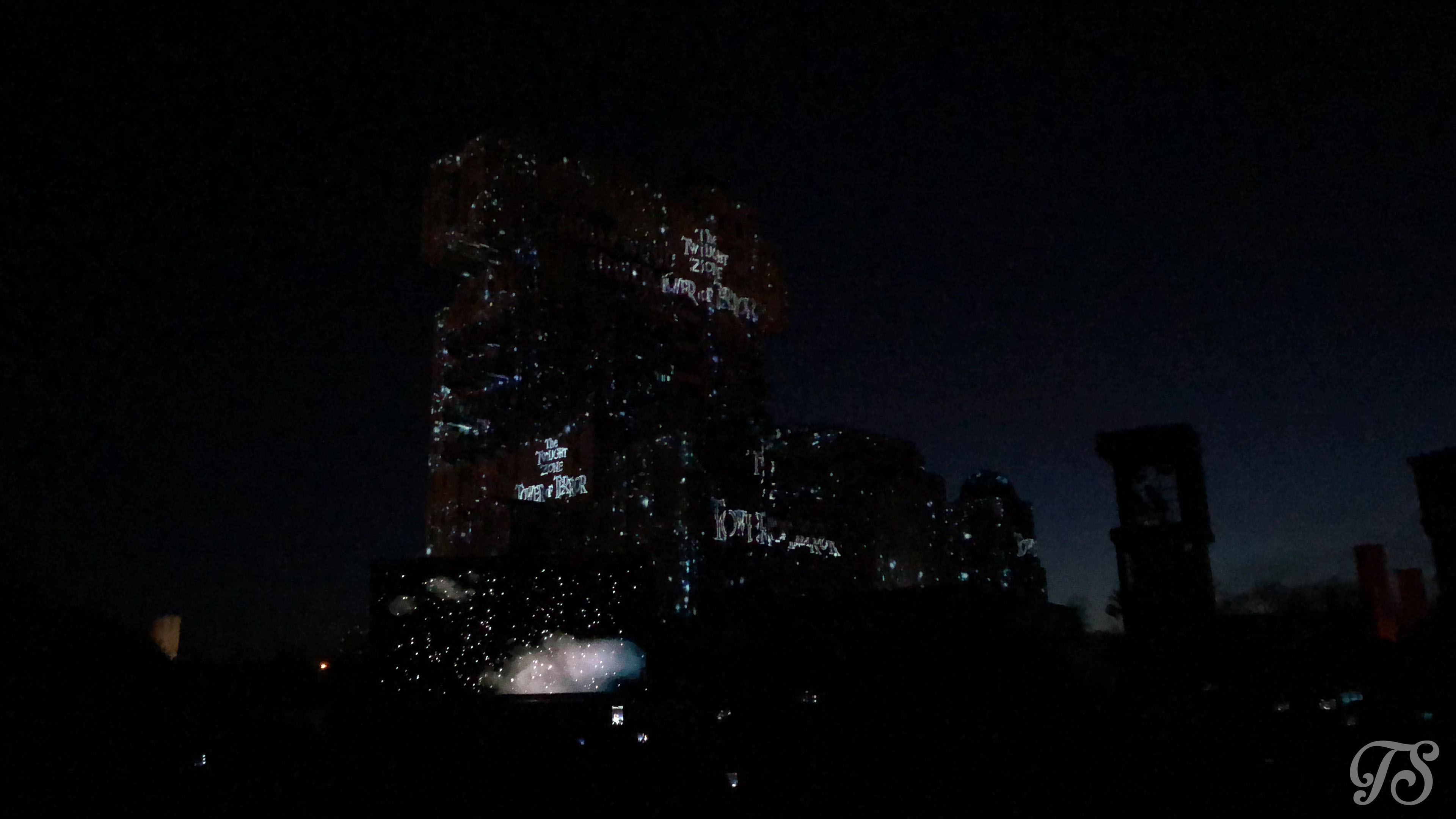 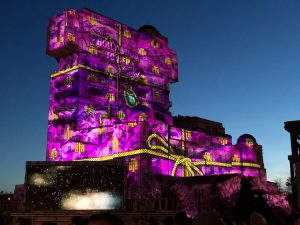