On April 12th 1992, Disneyland Paris opened its doors to the French public. But it was the 1987 convention that saw the creation of a Disneyland in France. The story of the choice of site for the project is widely known; various sites were studied in France, Spain and to a lesser extent the United Kingdom. Disney, of course, eventually settled on a plot of land of the eastern outskirts of Paris. Plenty of reasons were given for this, most notably the ease of access for guests across Europe.

Whilst the 12th April is the key date in Disneyland Paris history, the 24th March 1987 is arguably even more important. It was on this day when all the great and good in France and The Walt Disney Company descended on Paris to sign the most important document in the history of this European Disneyland Project.

The key signatories were:

There were, of course, other people present, but these are the key figures in the creation of a Euro Disneyland. The images of this day were beamed across the world and was one of headlines of French news reports that day.

The 1987 convention saw Euro Disneyland to be in the east of Paris. Paris, like most European cities, has areas that are more or less affluent than other places. Much like London, Paris’s wealth distribution in 1987 was very much west to east. It could, perhaps, be argued that this is still the case today; situated to the west of Paris are the wealthy settlements of Versailles and Saint-Germain-en-Laye, to the east poorer cities such as Noisy-le-Grand and Meaux. Euro Disneyland sought to bring some much-needed investment to the east through tourism and increased employment.

It is also necessary to have a larger understanding at the geographic structure of the Paris region. France is comprised of a series of Régions, and the one that Paris and Disneyland Paris is located in is called the Île-de-France.

Each region is composed of a number of département which are smaller administrative areas. Seine-et-Marne is one such département, which was represented at the signing by Paul Séramy who has a road named after him in the resort, and is the area that hosts Disneyland Paris. Historically, this area was one whose lead income was that of agriculture. Disneyland Paris itself is located on what used to be farmland, which lead to farmers protests whilst the resort was in construction. The 1987 convention sought to add another layer of income to the region, and one that could potentially be quite lucrative: Tourism. Disney was also compelled by the agreement to build an area on the periphery of the park, which is today known as Val d’Europe.

The 1987 Convention in detail

The agreement is an extensive document which goes in to great detail about many aspects of the resort. As many readers may already know, Disneyland Paris is not operated directly by Disney.

The creation of Euro Disney SCA

The Walt Disney company have decided to build a Disneyland in France. But The Walt Disney Company would not be operating the park on a daily basis, rather they would be an investor. Initially it would be Disney themselves but then a new company would take over. Until then, however, it would be Disney having full responsibility for the site and its construction. Immediately upon convention signing, Disney would deposit 100 million francs. This would be made into a bank account upon which the French State would act as a guarantor. Disney would be liable for deposits into this bank account for three years. In order to set up the operating company – Euro Disney SCA – several conditions had to be met:

The steps for Disney to withdraw themselves from the convention are unremarkable. The most interesting point is that Disney would have to supply the other stakeholders with a full list of shareholders of the new company. When it comes to resort investment, the French state had several constraints specified. Both Disney, and Euro Disney SCA were obliged to make sure that all investors were either French or from elsewhere in the European Economic Area. The Walt Disney Company can never own less than 16.67% of the company.

The 1987 convention also places a lot of importance on the promotion of European culture.

To allow foreign citizens to better understand France, the new company will take into account the theme of French and European cultural and historical heritage.

The agreement looks at Euro Disneyland playing French music. But more importantly a ‘circlevision’ attraction would showcase France. The attraction being referred to is Le Visionarium. Where possible, French will be the primary language within the resort but this may be used in conjunction with other languages. The French government were OK with Disney using the English title for big name attractions without translation. French must be the primary language of the resort, but translations in other languages was acceptable.

Public transportation was an important part of the Euro Disneyland project. The RATP would, at the cost of the State and Region, extend the RER A line from Torcy to Euro Disneyland. As part of this, Disney would promote the RER as the ideal way to get to the resort. If marketing was to mention getting to the resort by car, it must also mention the RER prominently. The tariffs on the extension of the RER line would be in proportion to travel on the existing line. If not enough people use the station (less than 25% of the 9,130,000 estimation), Euro Disney SCA would be liable to pay a fine to cover the loss made by the RATP. Disney would not be allowed to transport guests between Paris and the resort, except outside of RER operating hours and if the RER is down. As part of this, Euro Disney were required to charge parking separate to admission. If Disney ran a parking cost promotion, the RER would offer a similar promotion.

The station that was built was required to be as accessible as possible for the Disneyland Park. Disney were required to make sure that the distance between the ticket office for the park and the station exit was as short a distance as possible – and not more than 150m. The 1987 convention also compels Disneyland Paris to ensure that the path from station to entrance is be particularly well maintained and for Disney to study a direct station-to-park access. The bus station was also required to be close to the station exit. The station design would be determined by a architectural competition.

Finally, the State and Region would finance two autoroute A4 interchanges to service the resort. This would be completed no later than the resort opening date.

A plan with long-term impact

EURO DISNEYLAND EN FRANCE – as the official name for the project – was a plan for the long-term. Euro Disney SCA were permitted to decide upon a name for promotional purposes, eventually settling on Euro Disneyland. The 1987 convention envisaged a second park and resort expansion, but in a way that would make sound economic sense.

It would also give the French language and European prominence in the resort – something that was realized with Discoveryland receiving a Jules Verne theme. It would also set up The Walt Disney company to plunge Euro Disney SCA into a financial nightmare that has recently been alleviated by the refinancing of the company.

The convention, from date of signing, would be valid 30 years – so until 24th March 2017 unless extended. Euro Disney SCA have previously been successful in extending their land lease proving that the Euro Disney Public-Private experiment has been fruitful.

The 1987 convention provided a good theoretical framework for Disneyland Paris. The concept was that Disney would build a ‘resort that is of comparable quality’ to those already in existence. Whilst elements of the convention have proven to be less fruitful, it permitted the construction of a place that we all have come to love.

When we enter a Disney park, we leave reality at the gate, we turn the turnstile and enter another world. A world where everything has a reason behind it, a world where yesterday is just as good (if not better) than today, and the promise of the future is bright. We immerse ourselves in this world for days at a time, but eventually we must leave and return home to that reality. Now, I run DLP Town Square to share my passion with the world.
Share on facebook
Facebook
Share on twitter
Twitter
PrevPreviousFan relations in Disneyland Paris – what next?
NextThe best burgers in Disneyland Paris!Next

Disneyland Paris was a pioneer in Frozen entertainment; it is often too easy to forget this. Back in 2013, before the original

Disney’s Halloween Party 2019: The best yet

Every year the Disneyland Paris Halloween Party is one of the most anticipated events; in 2019 two Halloween parties have been offered 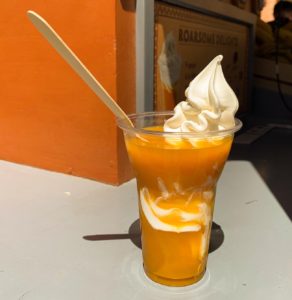 Since 2016, Disneyland Paris has been selling a summer Pineapple Whip treat; this delightful snack has become such a staple of the